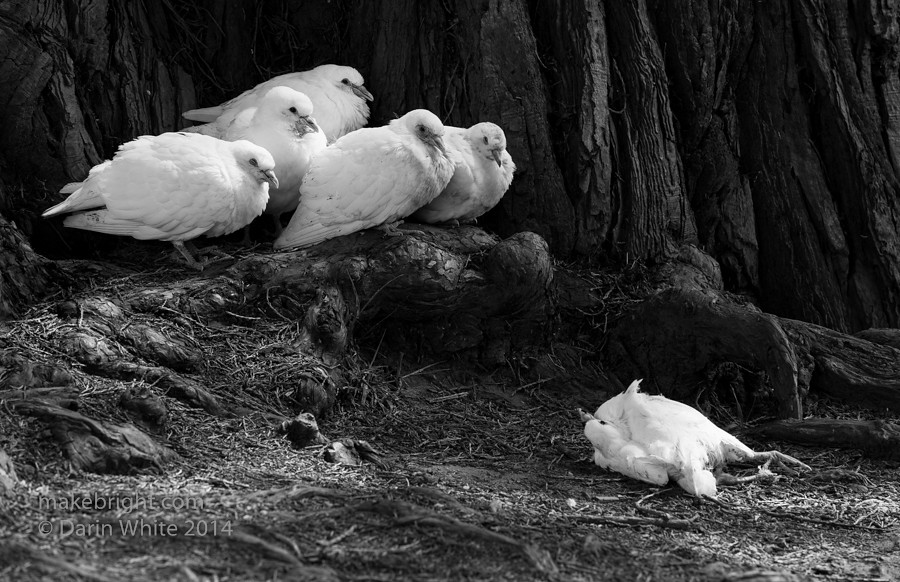 This is the image I brought to August’s 3rdThur photo review with Foto:RE. You are seeing the post-review tuned up version that incorporates great feedback from Sean Puckett.  He suggested I crop a bit more on the right side and darken a bright area under the leftmost bird. The result is, I think, a stronger composition. Here’s the backstory on the image.

Back in late May, Brohemus and I headed to San Francisco for a 3-day walkabout before hitting San Mateo for Maker Faire Bay Area. Cameras in tow, we spent days and nights combing through the Mission District. It’s a visually rich environment. It’s also socio-politically charged around the gentrification issue. And it has a lot of people in need. As we rode the #14 bus down Mission Street from 2nd, that aspect became increasingly obvious. Somewhere below 14th Street, I saw a shirtless guy flopped out on a mattress across the side walk. If you spend any time in SF, I think you can become inured to that need as a way of coping with its prevalence. But this image of mattress guy through the bus window really hit me in the gut. How the hell do we get to this place as a species? Is this truly an unsolvable problem?

After two days in the Mission, we headed up to the more affluent and touristy north end, checking out Crissy Field and the Palace of Fine Arts. Heading back along Baker Street to grab the bus, we happened upon this scene (above) at the edge of the side walk at the base of a tree. It was surreal. These five birds huddled together, watching over the dead bird. And they were not going anywhere no matter how close I got. It had a real gravity to it. As I laid on my belly, shooting with the 70-200mm, I couldn’t help thinking about mattress guy. This bird situation seemed like a powerful echo of the human condition in the Mission. My knee-jerk reaction was “See, the animals exhibit more compassion than humans.” And not to attribute too much emotional intelligence to birds, but maybe they are as confounded about their situation as we are are about ours.

My mom had an interesting take on this photo. We lost my Pops back in March, and Mom said this photo shows the utter helplessness with which we watch loved ones die. I reckon that was wrapped up in the whole image making as I shot this photo only six weeks after he passed. Whatever the interpretation, this shoot had the kind of gravity that presses on your chest, like some of the other photos that I shoot but then share with nobody.

Now the 1shot series is supposed to feature only one shot, but here on the edge of the long weekend you can click through for the bonus before-after pics I have brought to earlier 3rdThur photo reviews.

From the first 3rdThur that I stood up in March, here’s my before shot from the CITS opening featuring the BANDALOOP aerial act. 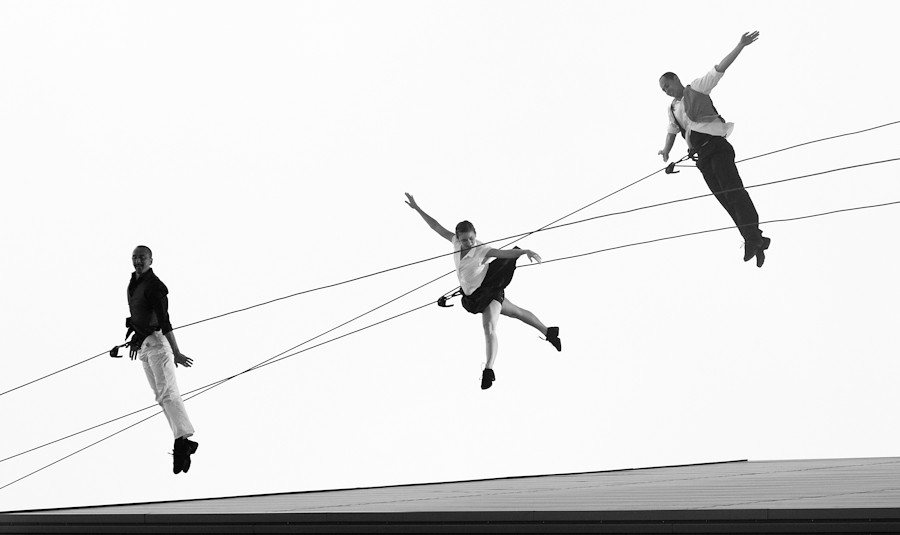 and here’s the after shot, incorporating feedback from Karl Griffiths-Fulton, Mark Walton and Sean Puckett. The image has been rotated 90 degrees from the original. The left side is actually the top of the original photo. I over-exposed to wash out the sky completely and pitched the composition as a musical staff with the performers as musical notes distorting and flying through the staff. 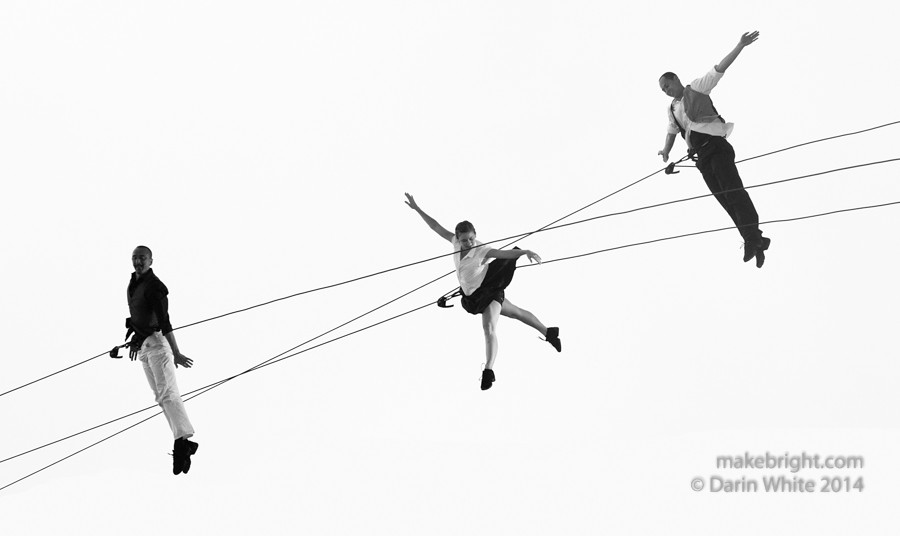 The review feedback suggested I remove the slice of building at the bottom of the frame to better float the performers visually. That made a stronger composition and got me to where I wanted to be with this image.

The next before shot is from the April 3rdThur review, where I brought an image I shot of skaters in Waterloo public square. 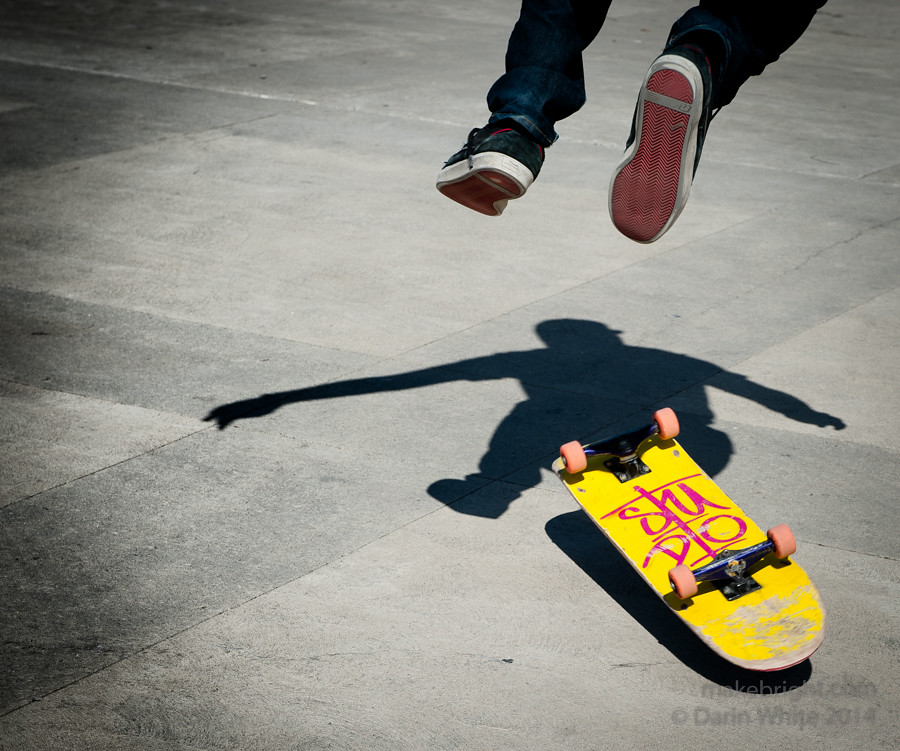 I pitched this composition with the story of Jimmy trying to land this trick time after time and then perhaps the trick doesn’t matter anymore as Jimmy discovers he can fly up, exiting the frame while spreading his “wings”. 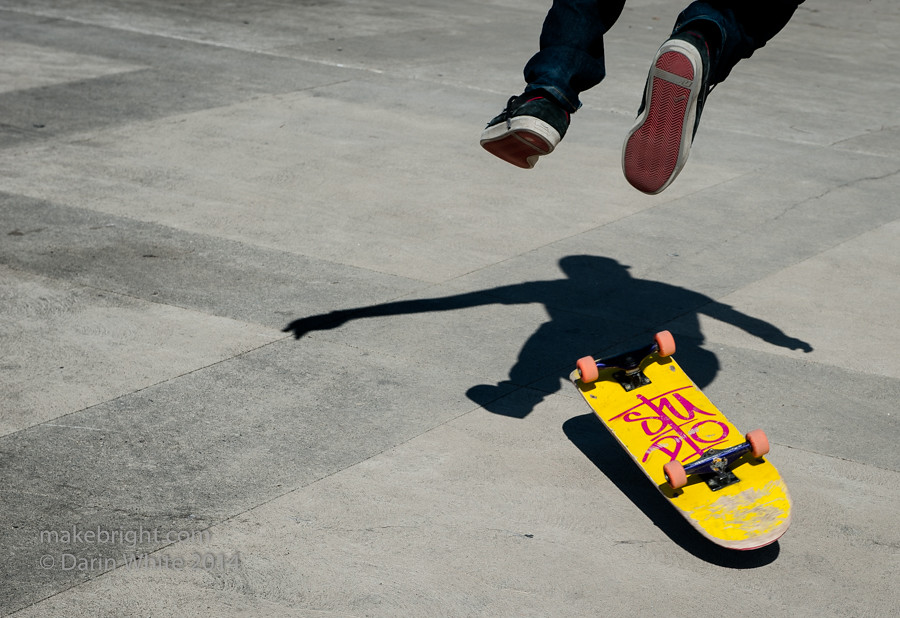 The feedback I got from Tony Reinhart and the 3rdThur review crew was to open up the composition on the left and dial down the vignette effect, both of which I did in this after shot. The reviewers also wished I had captured a visual separation of feet, shadow, and skateboard, but it just wasn’t on the list of problems I was trying to solve on this shoot. Great feedback though to inform future shoots.

Wrapping up this overly-long 1shot post, I apparently have a fixation with flight or a lack thereof and closing the loop with critical feedback is making my work better.

This entry was posted in photography and tagged 1shot, birds, San Francisco. Bookmark the permalink.