Salon: discussing (not styling) in DTK 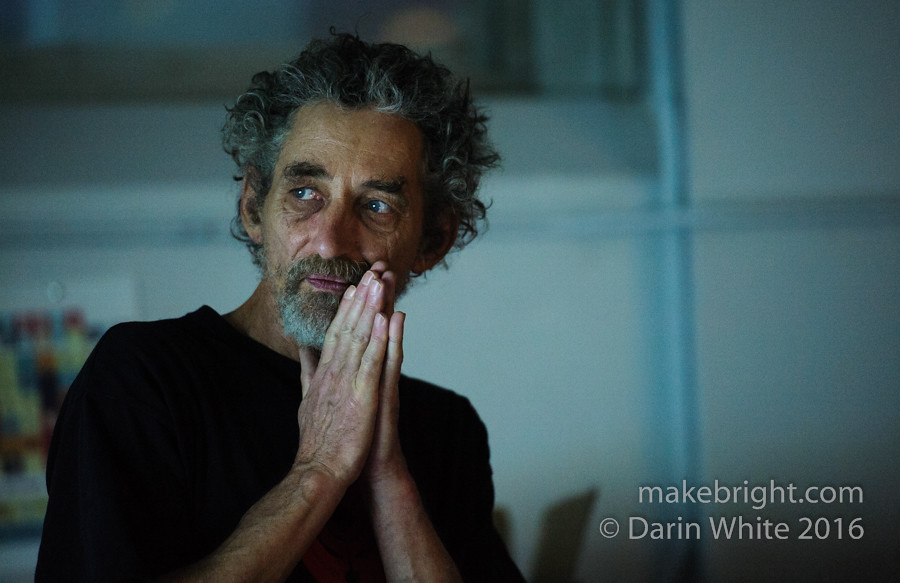 About a week ago, I heard UW’s Critical Media Lab was hosting a salon discussion at 44 Gaukel, which is their Kitchener lair. My very good friend/maker/artist/man-from-the-future, Mr. Bernie Rohde (above) was to talk about his work. As I told Bernie afterward, I learn something every time he talks about what he makes.

The TL;DR is a triplet:
1. Bernie is an amazing maker of electronic art
2. This is the first in a set of three planned salon meetups, you should go.
3. There is a lot of value in going to an event on your own with no idea of who or what to expect: carpe everything.

I’ve got more for you here, but first, gotta give a shout out to my latest Patreon supporter, maker/professor/knowledge integrator Rob Gorbet. I’m up to 16 salt-of-the-earth folks kicking in per-story amounts of $1 to $5. This post is pledged for $29.01 and 80% of that goes to help me keep bringing you stories. If you dig my community-building work, please support it with your pocket change. Ok, now more story. 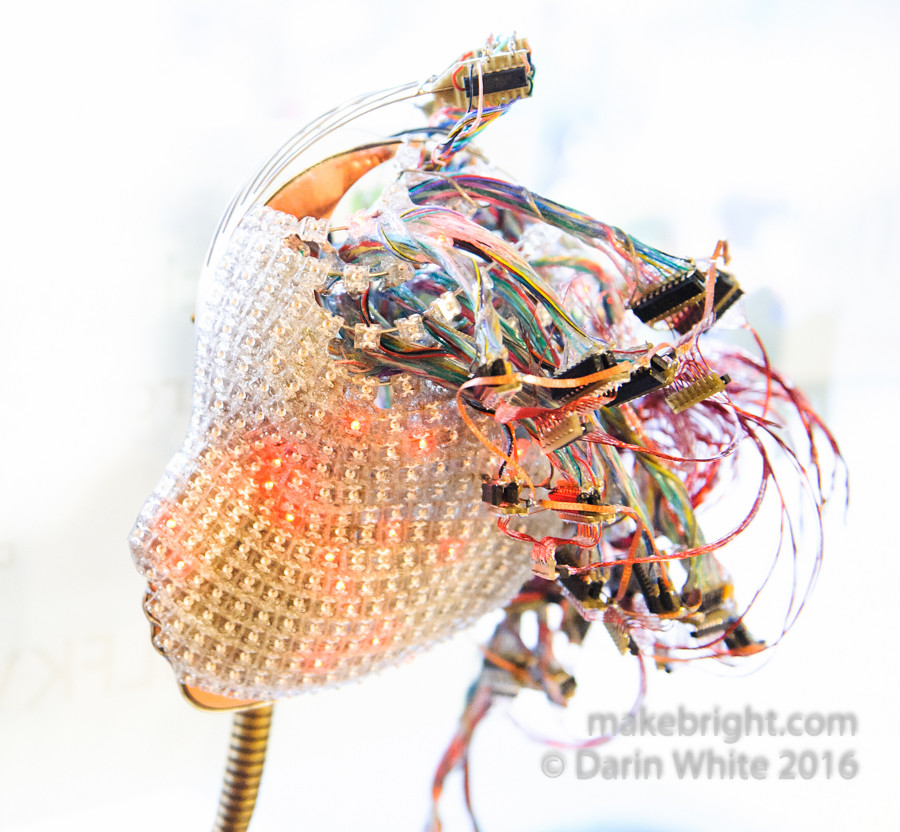 I learned about this meetup via an email Marcel O’Gorman (CriMeLab founder) shot to the kwartzlab public discussion list. People *always* ask me how I find these interesting things to do. I consistently reply: “With an open mind and elbow grease.”

Bernie made this anthropomorphic piece above out of LED lights, wires and chips. It displays waveforms of ambient sound on the face. And it sparkles like gems when reacting to simple room noise. You may be more familiar with Bernie’s clocks which have been displayed all around town. Regardless of what he makes, there is a very sophisticated fusion of beauty and function and concept in his work. He is a fastidious craftsman. 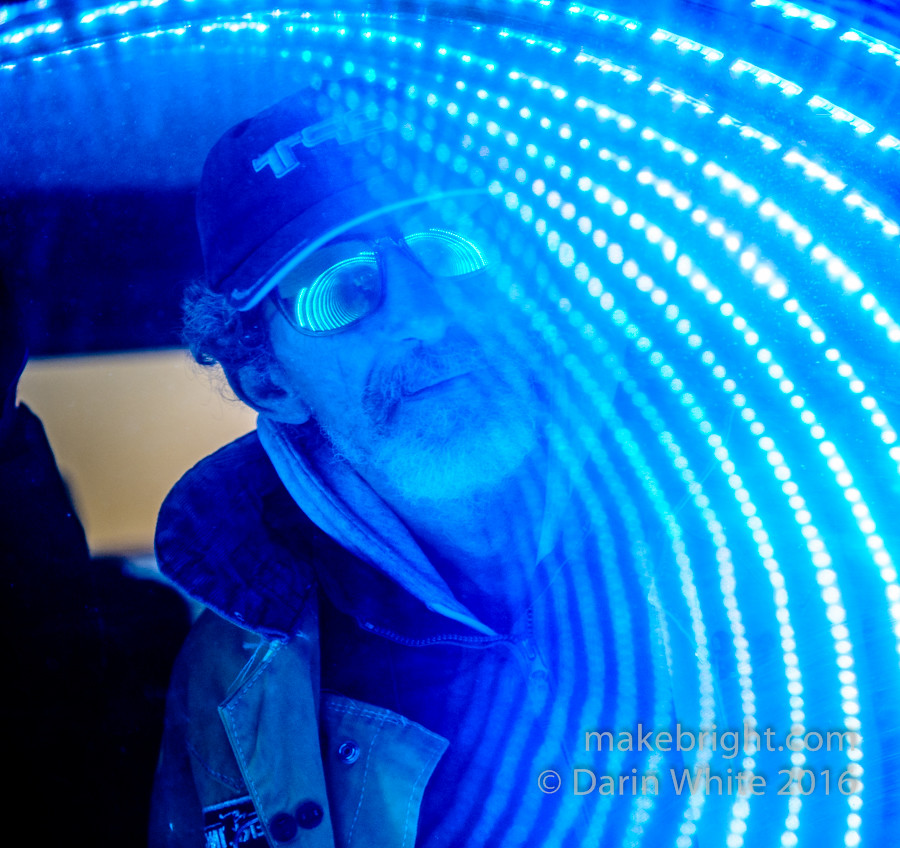 Back in October, Bernie worked on this sound-sensitive endless tunnel mirror installation for Night\Shift. We had some fun getting this shot that reflects the reflection of the endlessly reflecting tunnel. Super-meta.

I’ve photographed Bernie’s work for six or seven years now. Always something cooking. Check here for a blast from the past. 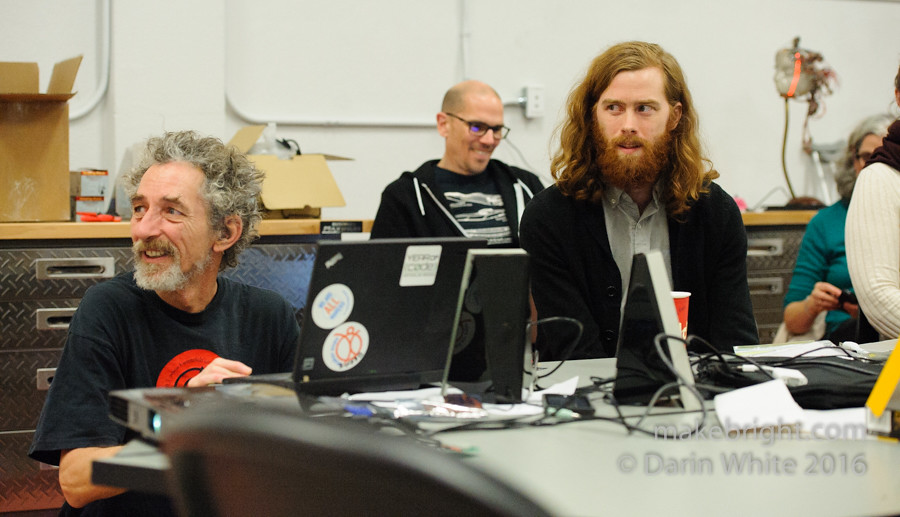 More recent work, as with all meetups, involves just getting your slides going through the projector. There’s the night’s host Stephen Trothen (right) and I believe he runs the lab here. XDM (experimental digital media) Professor Marcel O’Gorman in the background. This whole space in which the event took place is a bit of a miracle: hands-on building with… everything… as part of the English Department out of UW in DTK. It’s a great example of colliding disciplines and public engagement. 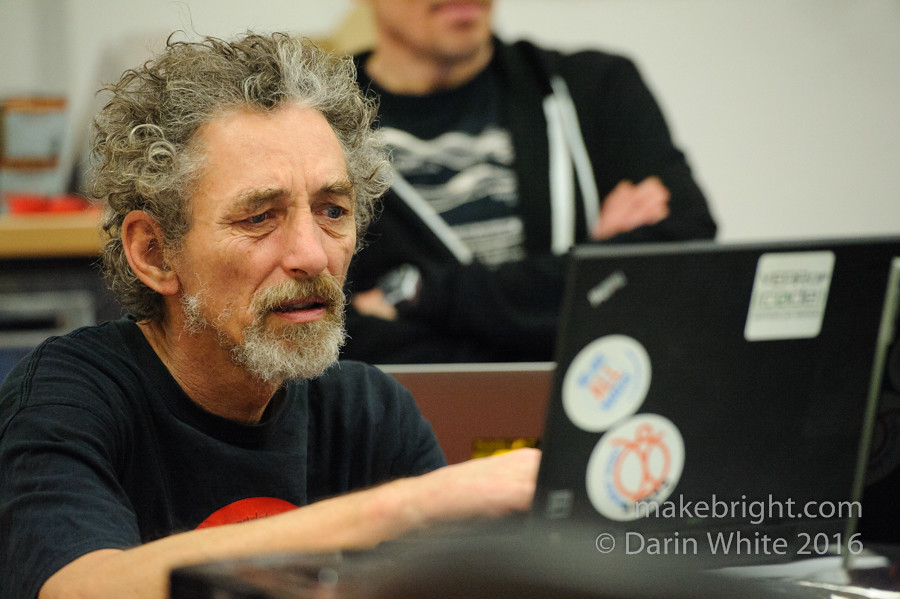 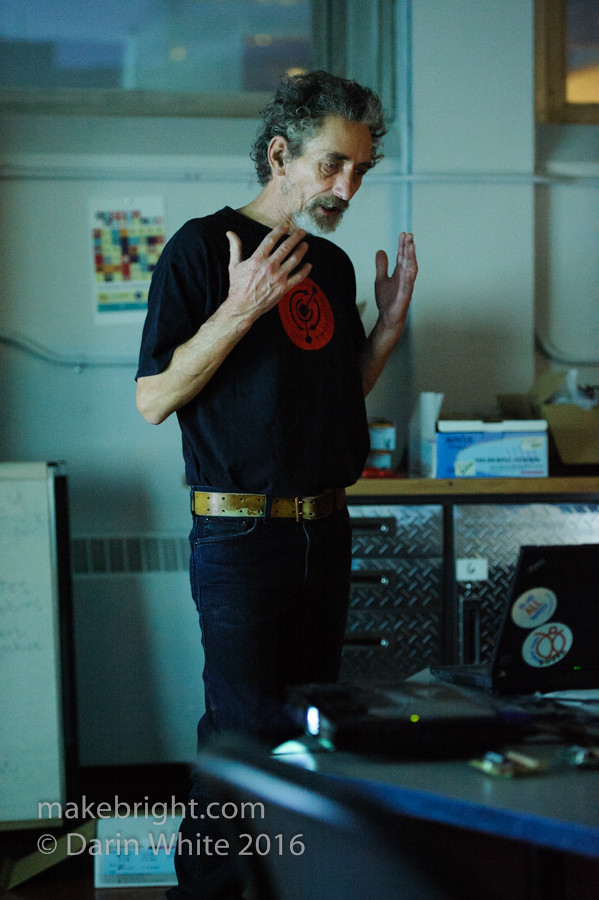 It can be extremely difficult to talk about your work as an artist. 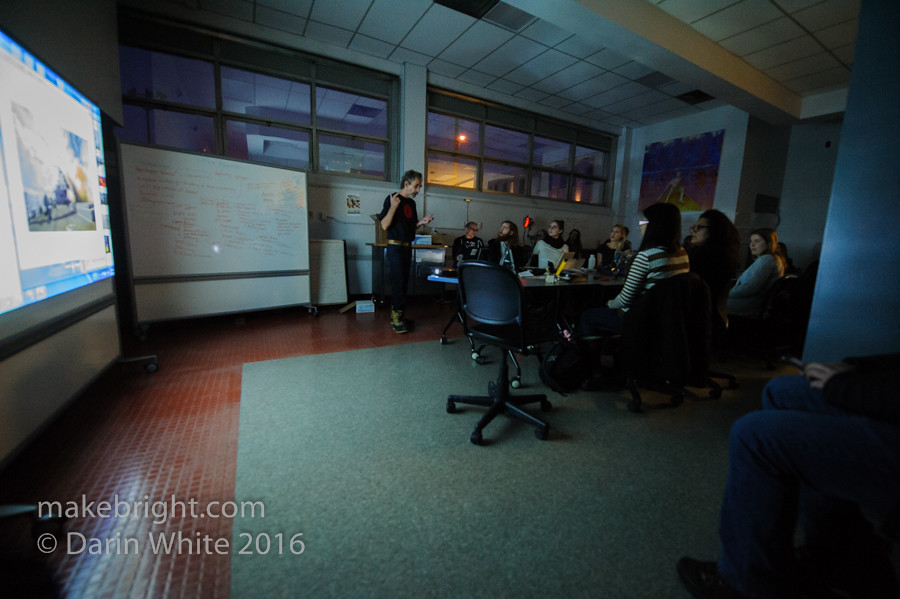 How can you cram decades of thought and experiments and creation into an hour? 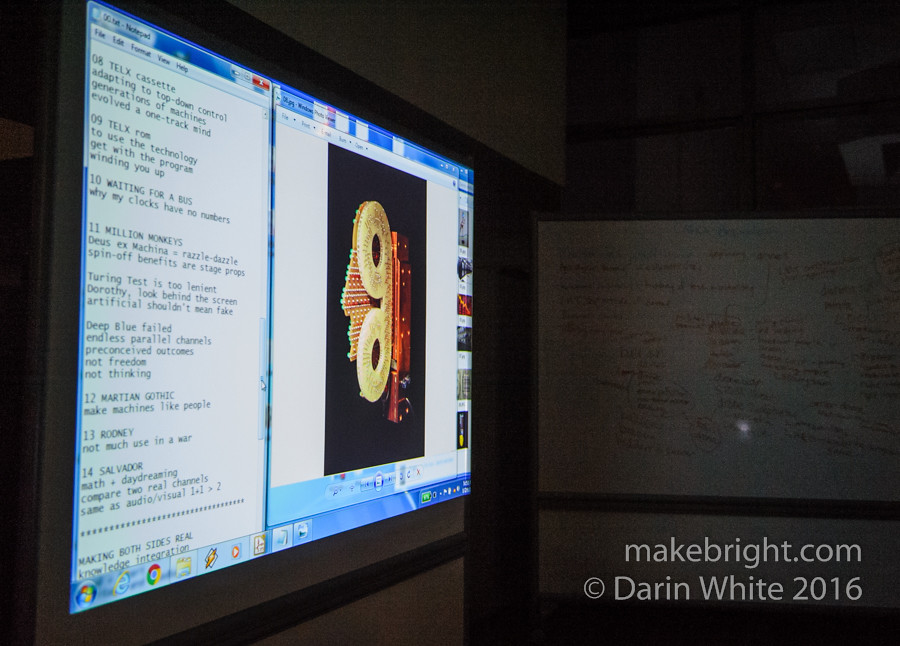 I hope all this work will some day be in one place at the same time. 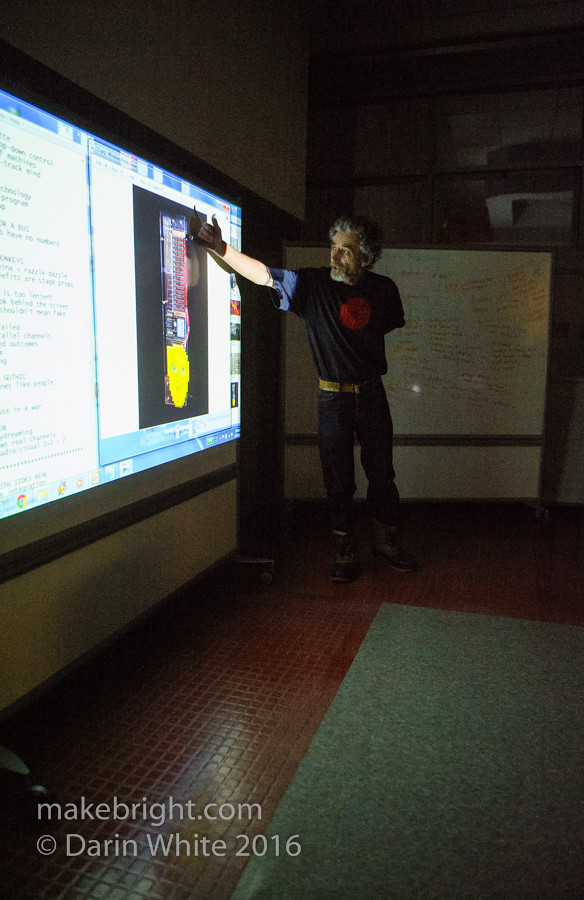 It was interesting to hear Bernie talk about the promise of computers he was offered earlier in life and the reality of them now and how that informs his work. Does art serve tech or vice versa? 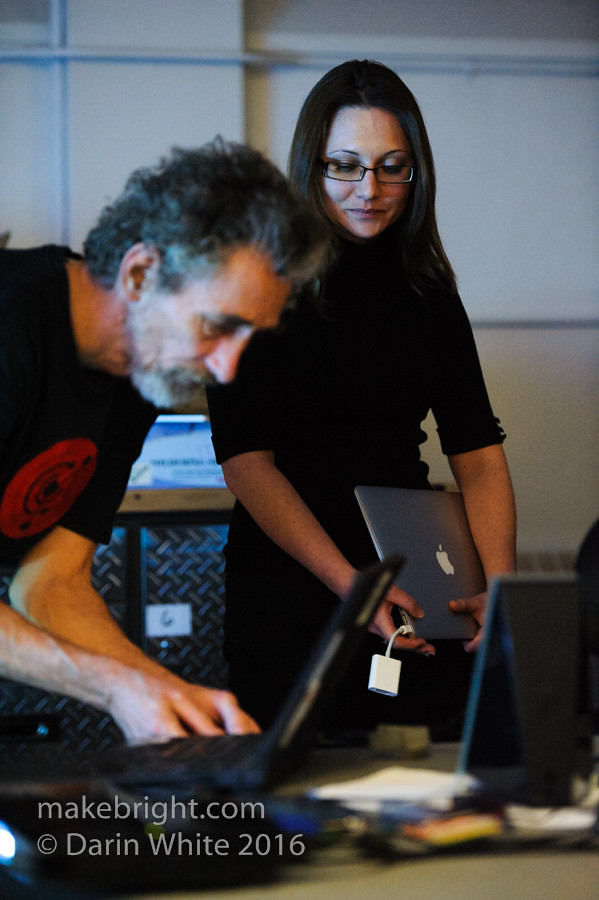 Then it was over to Dr. Ashley Rose Kelly (above) who recently joined the English Department at UW. She has done some analysis on makerspaces as alternate paths to learning. This was a really great talk too because it spilled out into a general discussion. 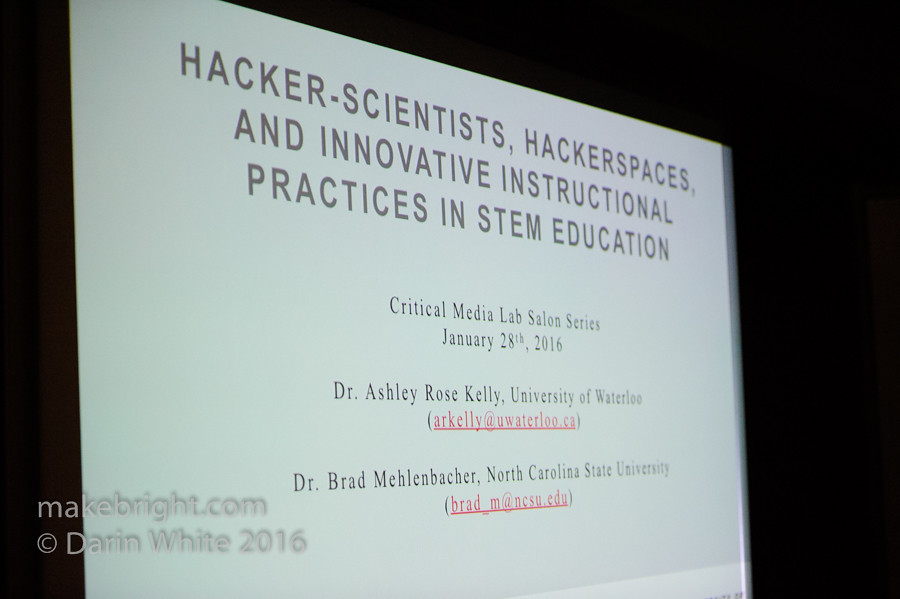 I’m fairly invested in the whole make-o-sphere with history as a kwartzlab founder and a Maker Expo planner. I’m probably personally more suited to learning in a lab than in a lecture hall.

We had the inevitable discussion around the table of semantics: “hackerspace” or “makerspace”? 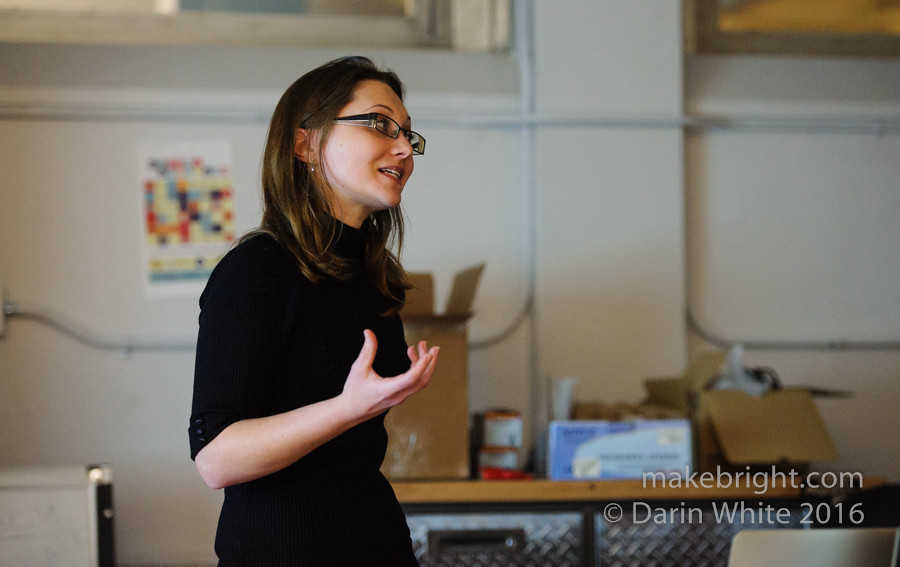 Ashley talked about the SafeCast project that consists of community-built environmental data collection hardware and a mothership to capture and analyze data. It was born out of the post-tsunami mess at Fukushima where independent radiation level data wasn’t available. Think of this as crowd-sourcing data with DIY Geiger counters on steroids. Powerful stuff. 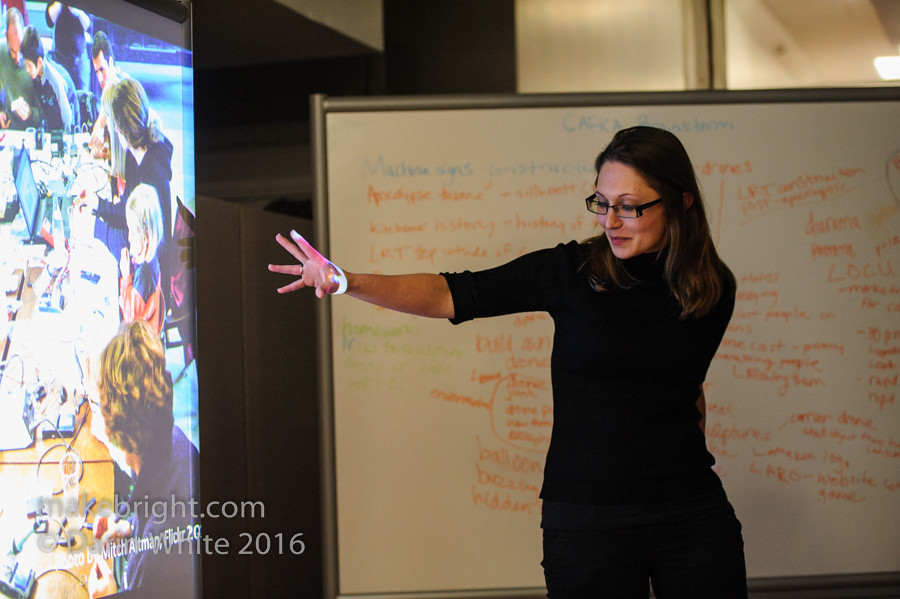 An even more interesting discussion developed around public access to makerspaces. That thread led me to discover a makerspace within UW that I’d not heard of.  That developed into an invitation the following week to visit (story coming on that shortly).

I love this format: some structured talks to get things rolling and then lots of discussion. I met a bunch of new people. I know these are way-early in the evening (5:30pm), but later has its own problems too. You know what we always say here: leave yer sofa, find the others.

At Charles and Gaukel, this is Kitchener.

2 Responses to Salon: discussing (not styling) in DTK