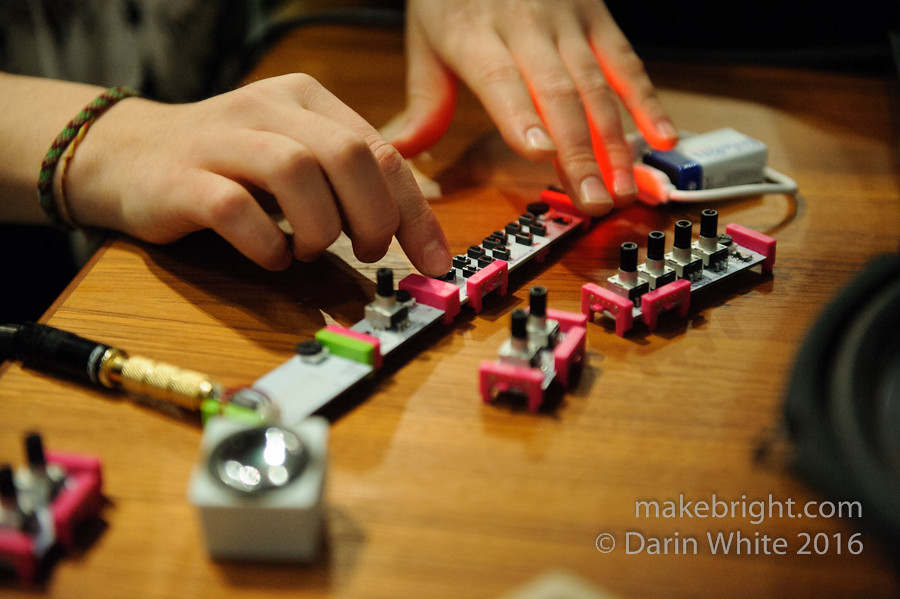 To state the obvious: you can build the community in which you want to live.

A week ago, I got together with some electronic music makers as they (well, we) put that into practice. My good friend and modest polymath, Matt Borland, mentioned at coffee late last year that he and a crew were starting a music meetup. I kept asking questions until he invited me. Not only do I love new meetups: I also have a bit of history hacking noisy electronics.

I’ve got more for you here, but first, gotta give a shout out to my latest Patreon supporters, Matt Borland himself and Ben Brown, kwartzlab and Maker Expo meta-maker.  If you dig my community-building work, please support it with your pocket change. Ok, now more story.

Matt, an engineer by training, builds sound-generating synthesizer circuits. I imagine that pursuit partly fueled his recent job change from UW and Conestoga College sessional instructor to audio gear product manager at a local firm. His expertise includes a fair chunk of research in vibration analysis and he wrote a helluva good doctoral thesis on characterizing piano soundboards (yeah, I read those). 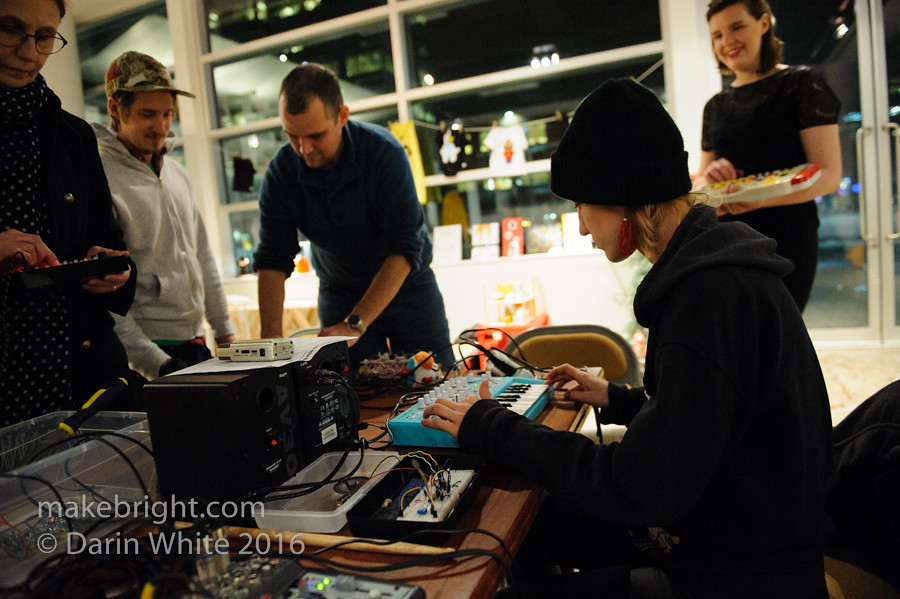 Inspired by the movie “I Dream of Wires” documenting the rise, fall and rebirth of synthesizer music, Matt was keen to create a community akin to the east coast scene that developed in the 60’s and 70’s around Don Buchla’s approach.

The most interesting community seedlings come from collaborations. The newly-formed Waterloo Tape Music Club (WTMC) is just that. Encouraged by artist Isabella Stefanescu (above left) who brought multi-disciplinary artists together in A Sense of Place project, Matt (centre) connected with others.

Joining in this Thursday night session, was Nik, Candy (seated) and Jess. 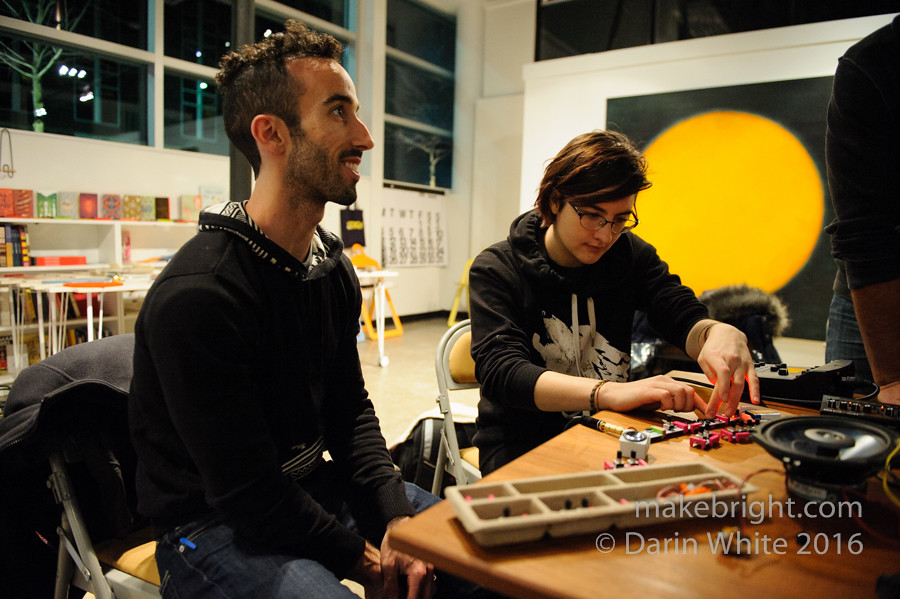 Here’s Jordan Mandel, a Digital Media Lab instructor with UW’s Stratford Campus where he manages the Audio and Engage Labs. He’s the second leg of the WTMC tripod. Kasia (right) is rocking the improv littleBits synth.

Matt met Jordan at a Felt Lab talk after giving a talk on piano tone mapping back in April 2015. 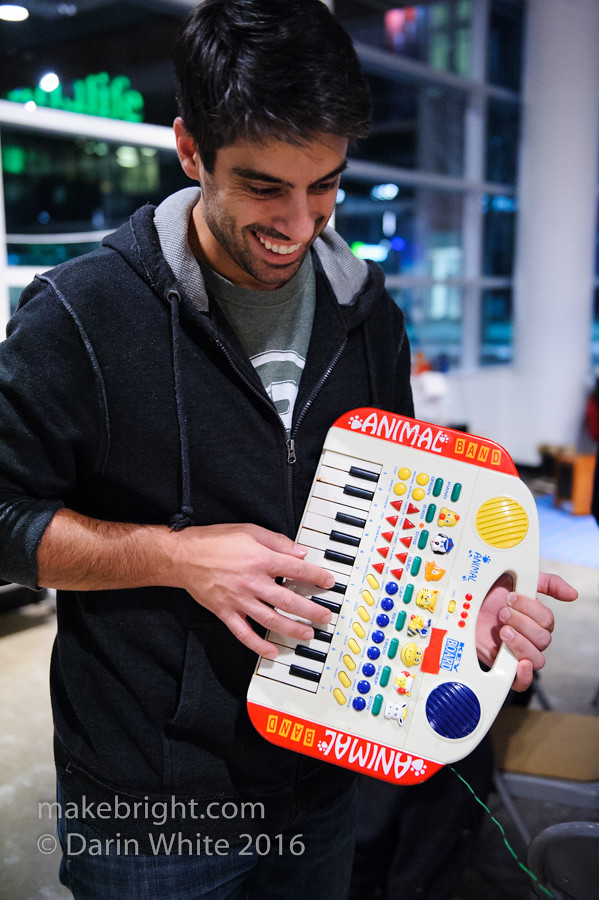 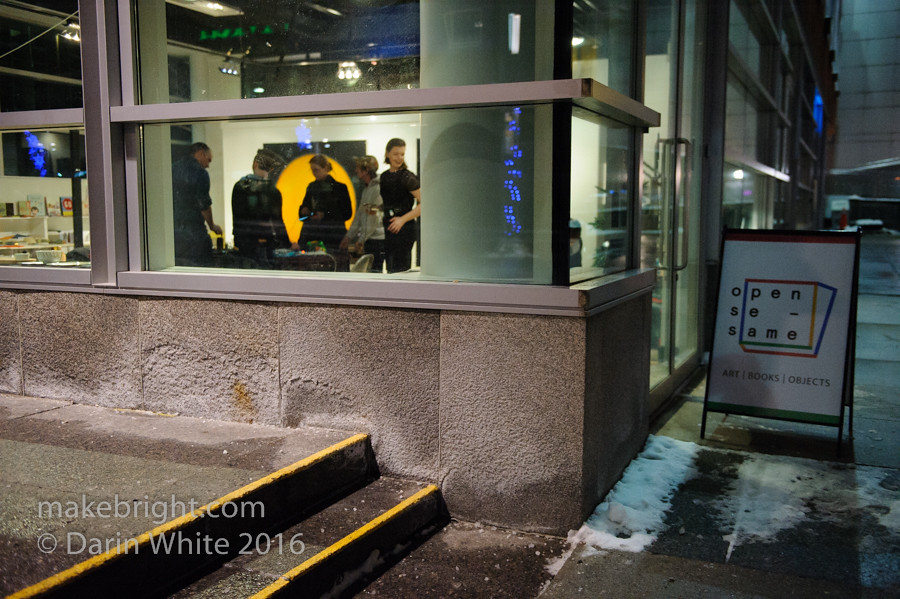 Sarah has curated some shows at Lauren Weinberg’s art space Open Sesame at Kitchener City Hall, and Lauren made it possible for us to all meet up on King Street in DTK. There is a whole web of people in Waterloo Region willing to help new efforts get started. 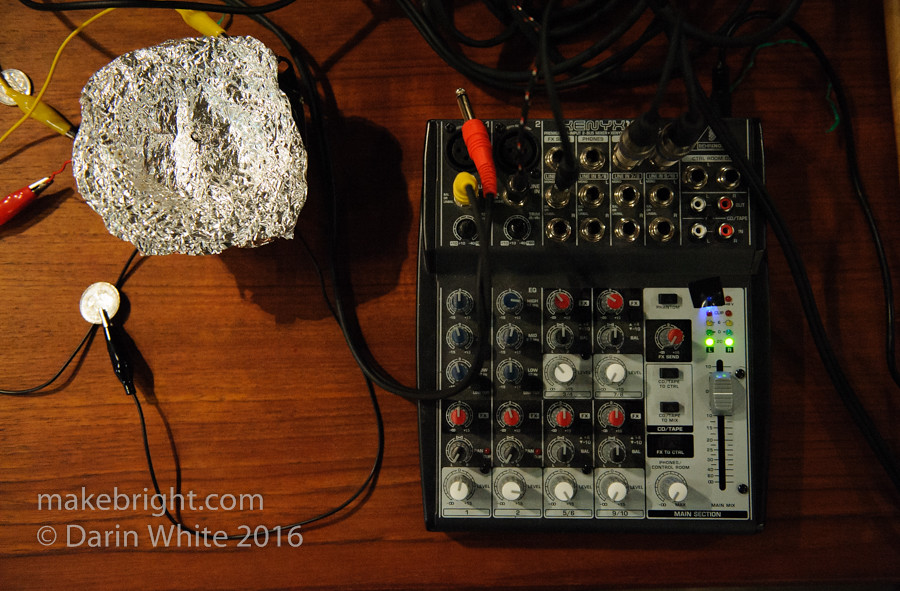 Lacking a landing place in academia to do research in this domain, Matt brings the engineering background together with Colin’s music experience to form a sort of citizen lab with Jordan. I see more of this happening in makerspaces across the Region and beyond. Highly-skilled and deeply-motivated makers coming together, often with few resources, to pursue a course of research on their own.

Colin had this cool rig above that employed a hunk of tinfoil laid on a speaker and intermittently connected to an electric contact. Touching the contact just so to the foil would set up a resonant sound pattern. There were later experiments with a length of chain and also a hand file. 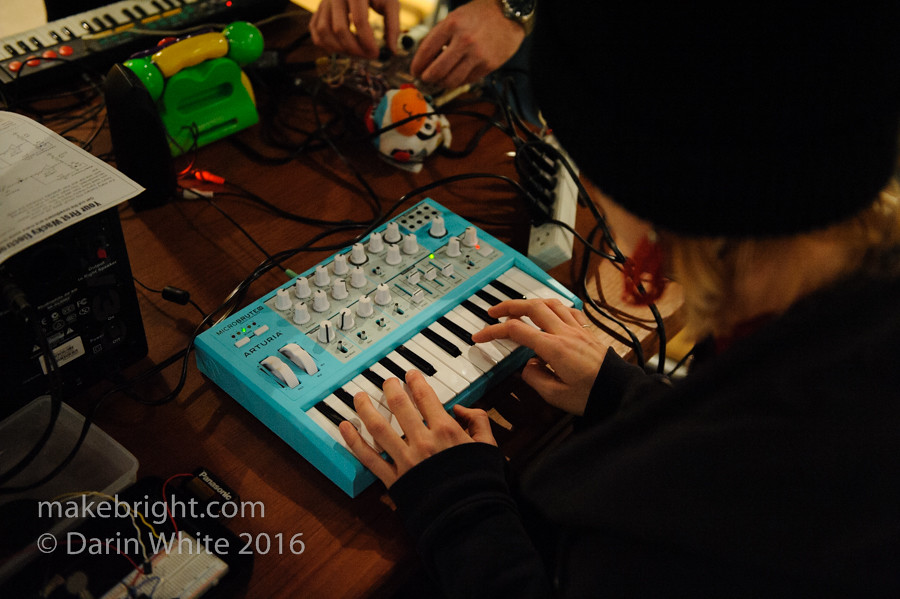 Candy on the keyboard. 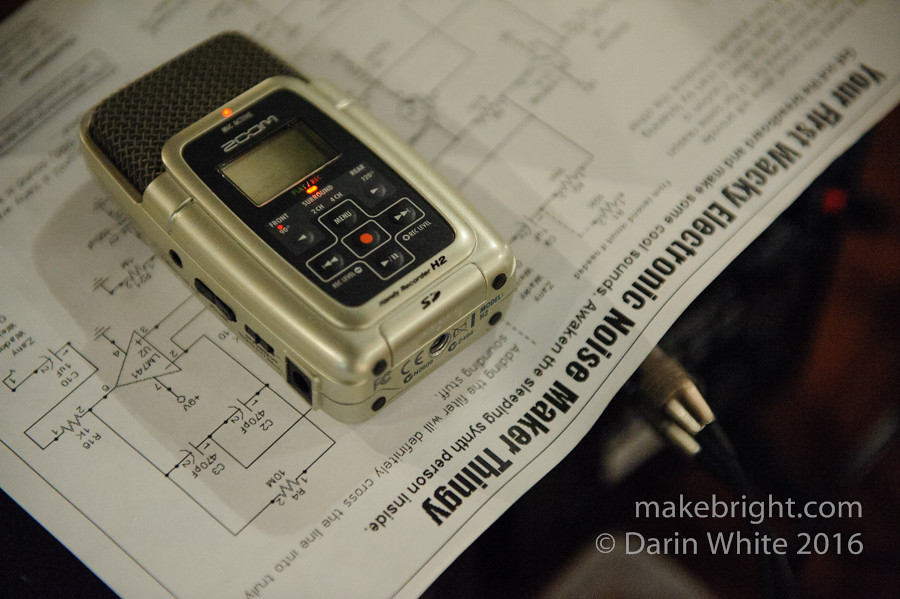 Here’s a small sample of the nights sound making. Not a coordinated effort (at least on my part), but fun experiments. 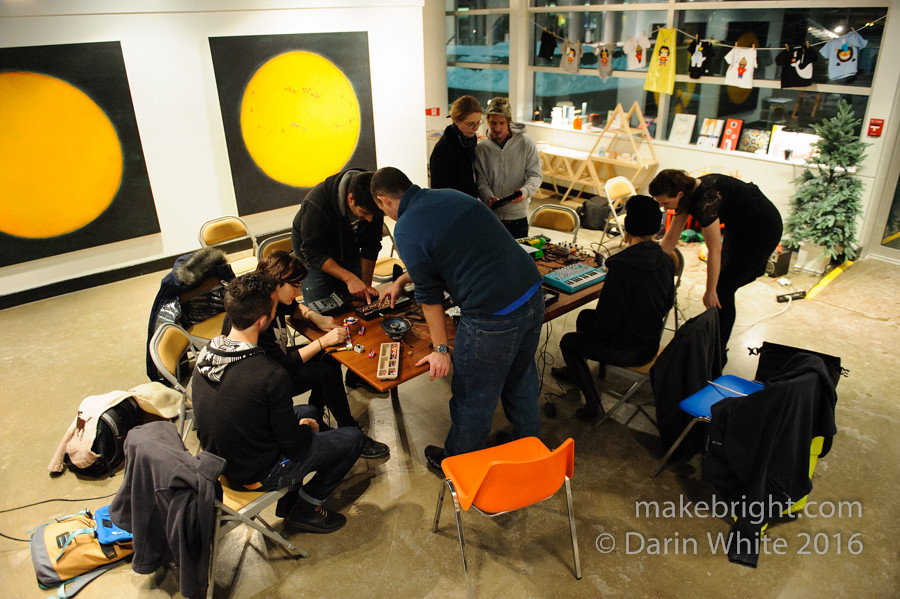 I like this space on the corner of King and College downtown. It’s like a fishbowl inviting people in. 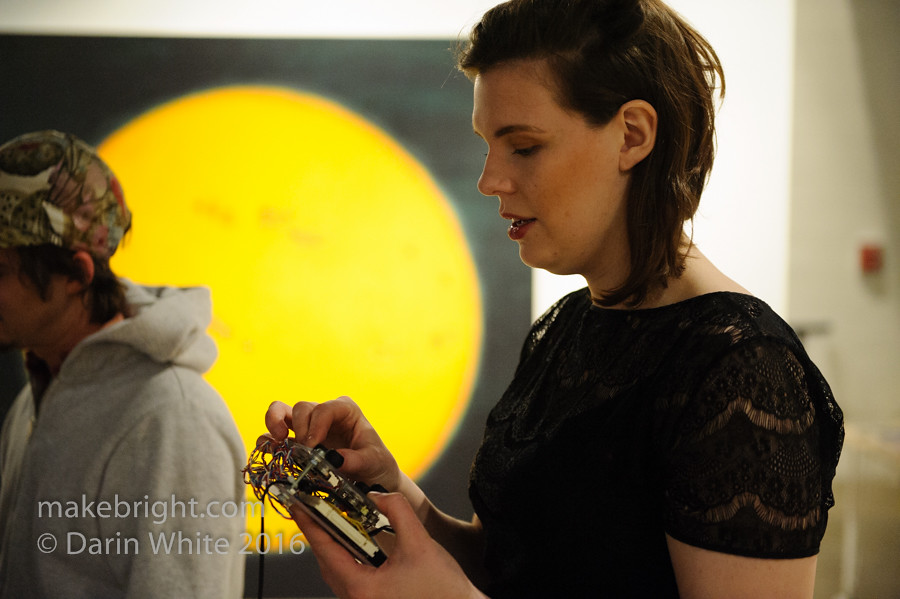 Jess staffs the gallery. Here she’s rocking the Wacky Sound Generator that I brought. Though built by me, it was designed by the amazing Ray Wilson who runs Music From Outerspace. It is the hands-down most popular piece of gear every place I go. 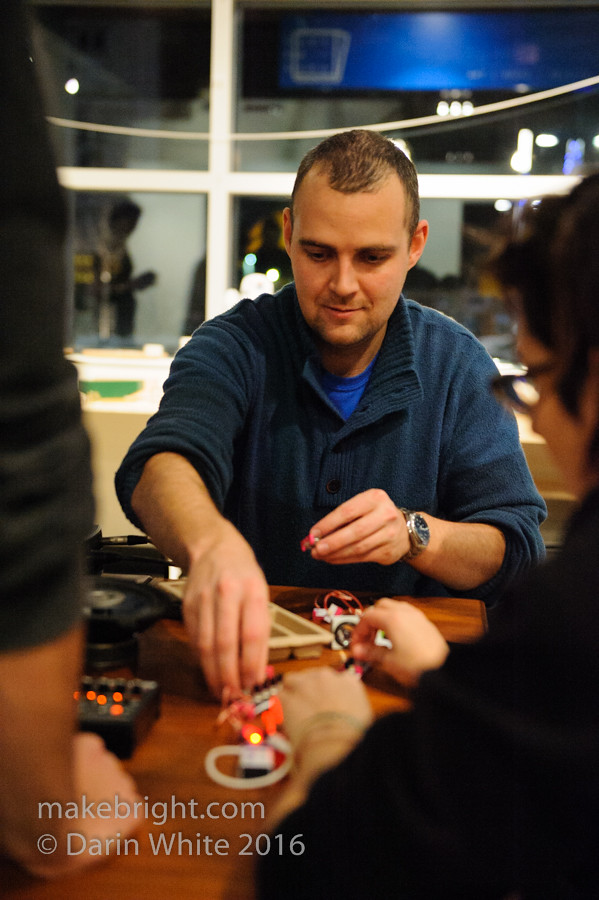 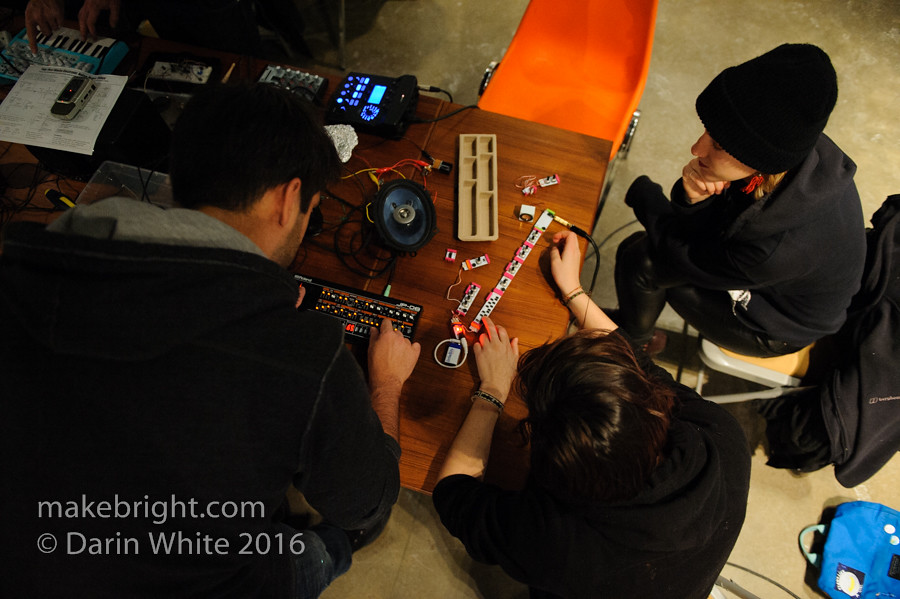 Colin, Matt, and Jordan had planned to get some talks going around projects that various people were doing, but we ended up happily making sound all night long. 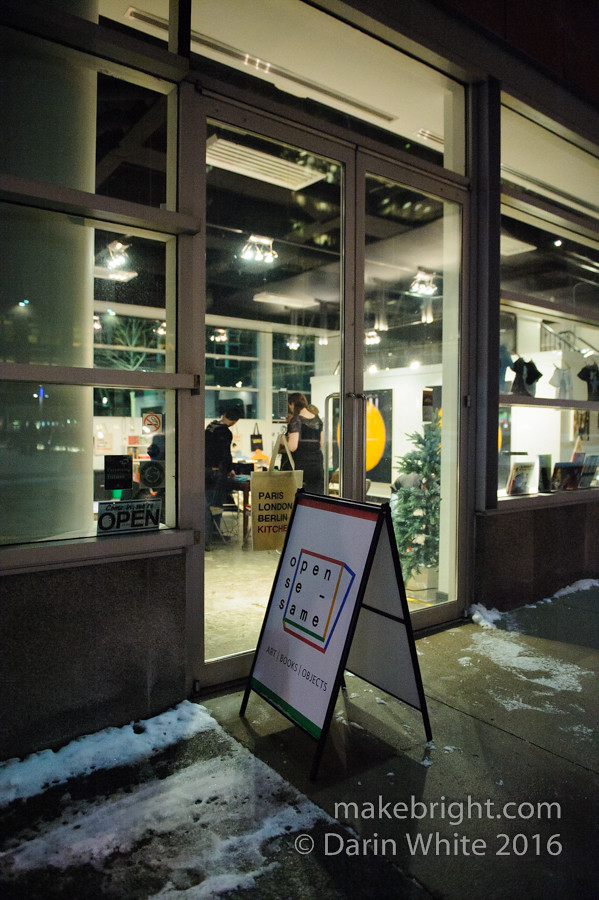 The next meetup is very tentatively scheduled for March and may be in a different location. If you’re super-keen to know more you can contact Matt at tak@takforidag.com 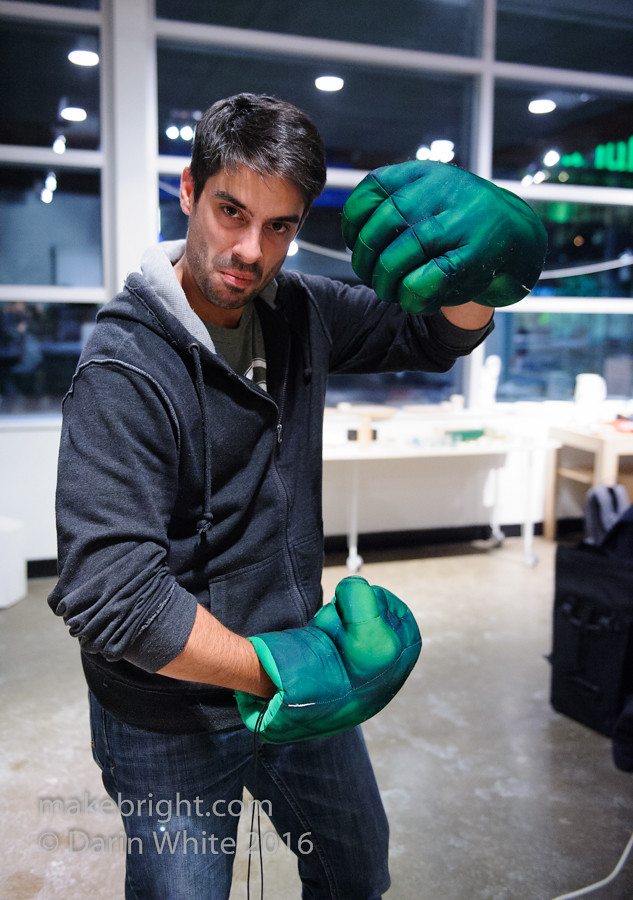 Colin responded as most do to my Hulk Gloves: with glee. My buddy Storz gave me these for Project Loud Monkey. I rewired them to allow connecting to an external amplifier. “Hulk SMASH!” 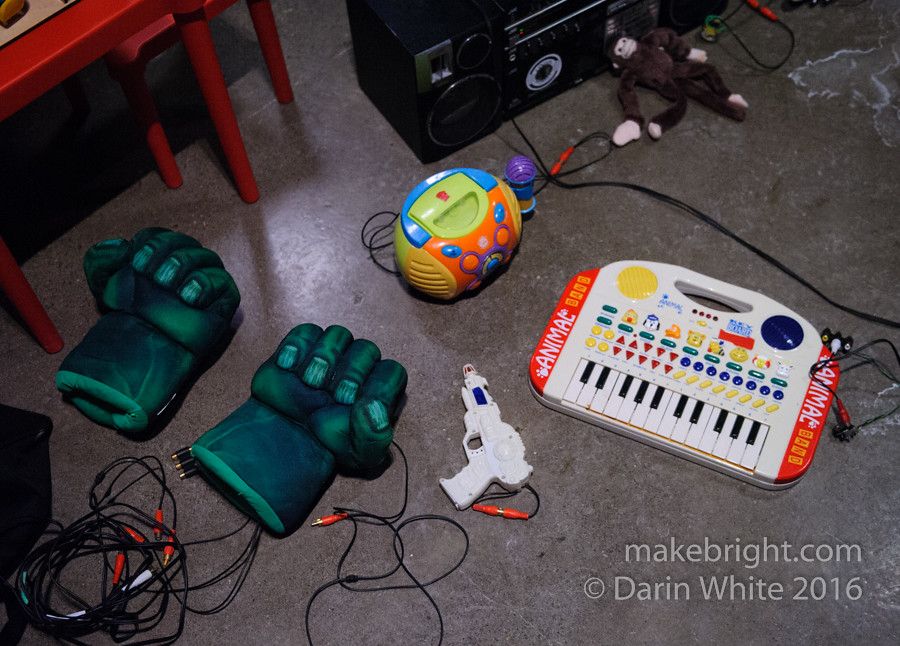 All the toys that parents were delighted to part with due to their noisy nature. Now in my care for Loud Monkey. I wasn’t sure if I should lug all this gear out to the meetup, but I really don’t like showing up as a mere spectator. Always best to participate. 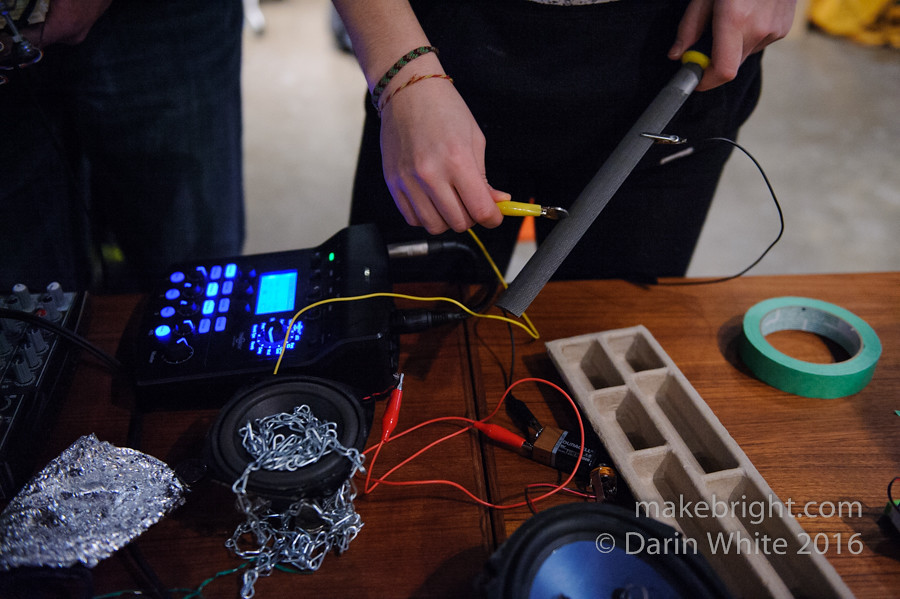 There’s some chain link on that speaker of Colin’s. Electrical contact along the file generated interested sound. Discovery! 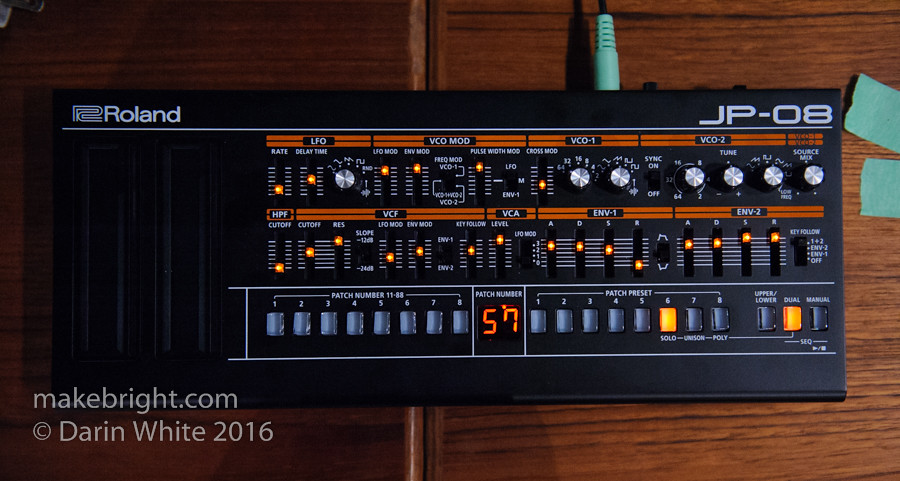 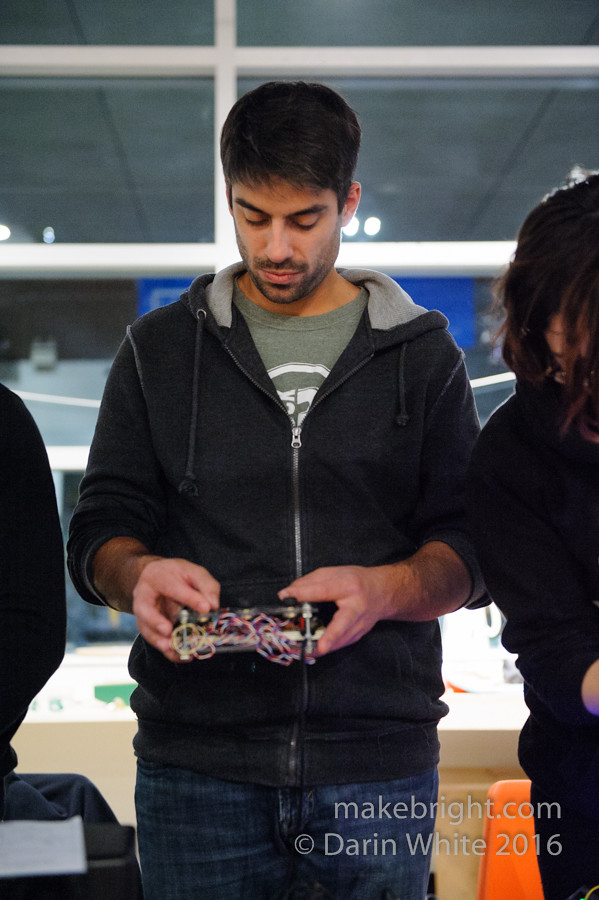 I think there is a Wacky Sound Generator in Colin’s future. 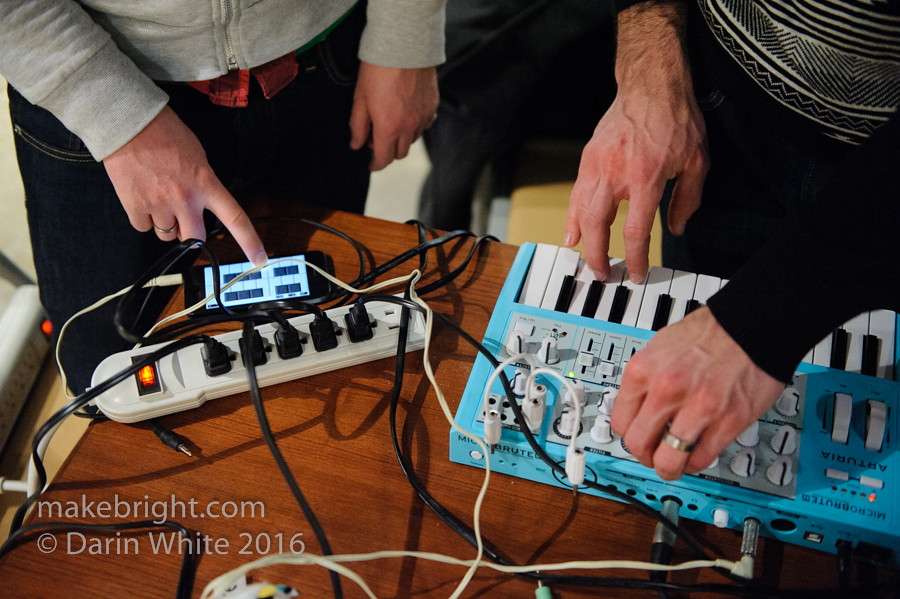 Nik on the phone-based sequencer and Jordan on keyboard. Collaboration. This meetup provided everything I like to find when I leave my sofa at night: new friends, tech, art, making, exploration. High five to the organizers. This stuff doesn’t happen by magic, but when people put it together it serves up magic. What will you make?

On King Street, this is Waterloo Region.

This entry was posted in community and tagged electronics, music. Bookmark the permalink.