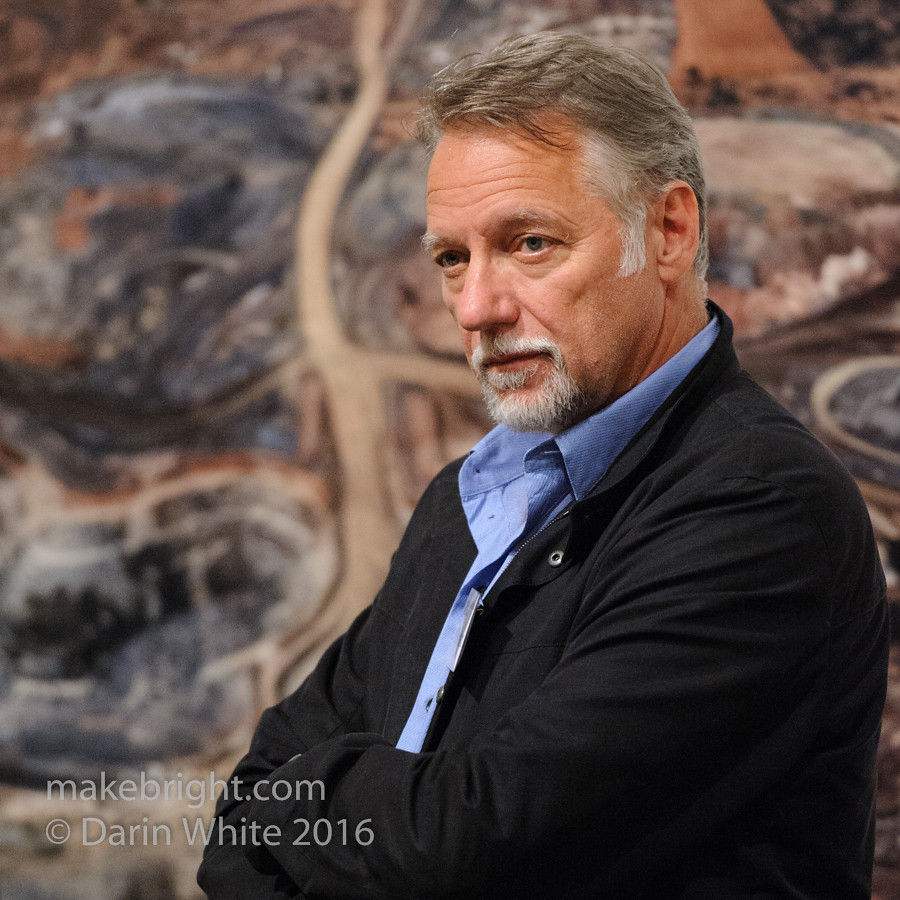 Earlier this year, I resolved to attenuate my superlatives. You know… everything is “awesome”, “terrific”, “greatest”, etc. Well, I gotta suspend that modus operandi for just one post so I can tell you about Edward Burtynsky’s show “Infinite Change” on now at KWAG and the talk given last night by the man himself.

My hair is blown back and my brain is still crackling as I can’t stop thinking about: the work, the talk, the fact that this giant Burtynsky collection second-only-in-size-to-National-Gallery-of-Canada is now in the permanent collection of our Kitchener Waterloo Art Gallery right here in Waterloo Region. This is a big deal. A huge deal.

Interlude: if you dig my community-building work through these stories, please support it with your pocket change. Shout out to my patrons who get what I’m doing.

The TL;DR: go see this show right away. If you missed the talk last night, I can’t help you (I tried on Thu, but you gotta believe me when I put this stuff on facebook/twitter/coffee shop), but you will definitely want to see the work, which now lives here. Like us. 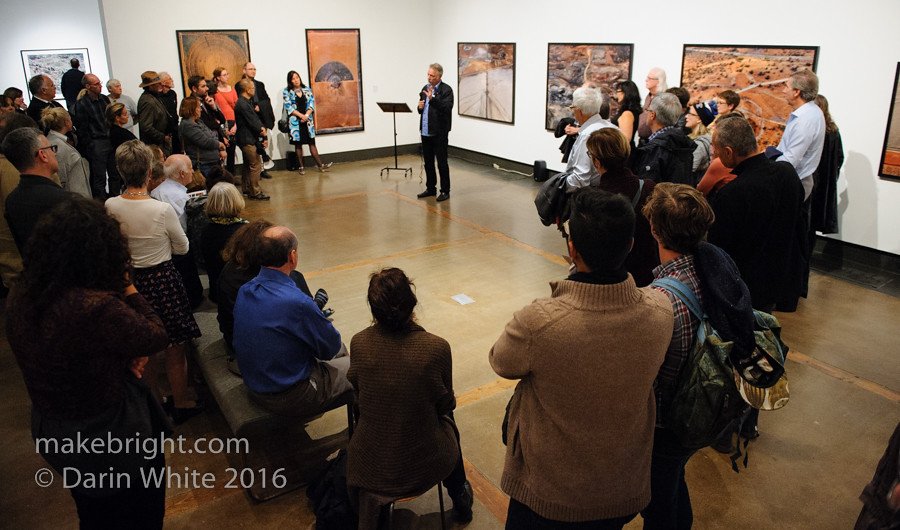 The gallery was happily jammed with hard-core fans (there’s my friend Nik, bottom right, who described himself as a Burtynsky fanboy and brought along a book of Ed’s work in hopes of getting an autograph).

I didn’t know what to expect in the talk. What we got was a most succinct walk-through of Ed’s path in his work/life that I found completely inspiring as a photographer and human. Particularly appealing is his utter lack of pretense and down-to-earth, super-chill comportment. From an early start in photography when his father purchased an entire darkroom setup and installed it in their St. Catharine’s basement, to his studies at Ryerson and then a serendipitous wrong turn and epiphany in Pennsylvania that revealed “manufactured landscapes” in coal mining country; Ed’s course seems fueled by curiosity. You can read wikipedia to learn that he founded Toronto Image Works, was inducted as an Officer of the Order of Canada, is an integral part of the Scotiabank CONTACT Photography Festival, and more.

Most interesting to me were his thoughts around the human condition and our impact on the planet. He wasn’t soapboxing; just offering images of what is. He talked of a moment on a 4-month cross-continent photo journey, when stopped at a gas station he realized everything from his plastic raincoat to the fuel in his car comes from oil. The origins of that oil were opaque to him. He started tugging on that thread back in the ‘80’s and 30 years later he observes that we can’t have this (the comfort-filled conveniences of modern life) without that (the horror of, for example, a plastic dump in China).  He noted that “inverted pyramids” created by quarrying stone deep into the earth in Italy are what turn into our kitchen countertops here. The insatiable extraction of copper from a vast mine in Chile is rooted in our cycling of smartphones every 18 months. He talked about the mechanical advantage of the internal combustion engine facilitating change of our planet on a scale not seen since a giant meteor slammed into the Gulf of Mexico, wiping out about 70% of life. Ed noted that, beyond oil, he discovered in his series on water that every major river in the world is now dammed. That causes dustbowls in old riverbeds, lifting heavy metals from their bottoms and floating it in the air across Los Angeles. He discovered that the Ogallala Aquifer beneath North America, one of the world’s largest, has been depleted of water from ten Lake Erie’s worth to only seven.

When I type all this, it reads like a mission, meant to convince you of something. But the way Burtynsky put it across was more along the lines of sober reflection, reminiscent of Noam Chomsky describing global politics and conflict. You had to be there. 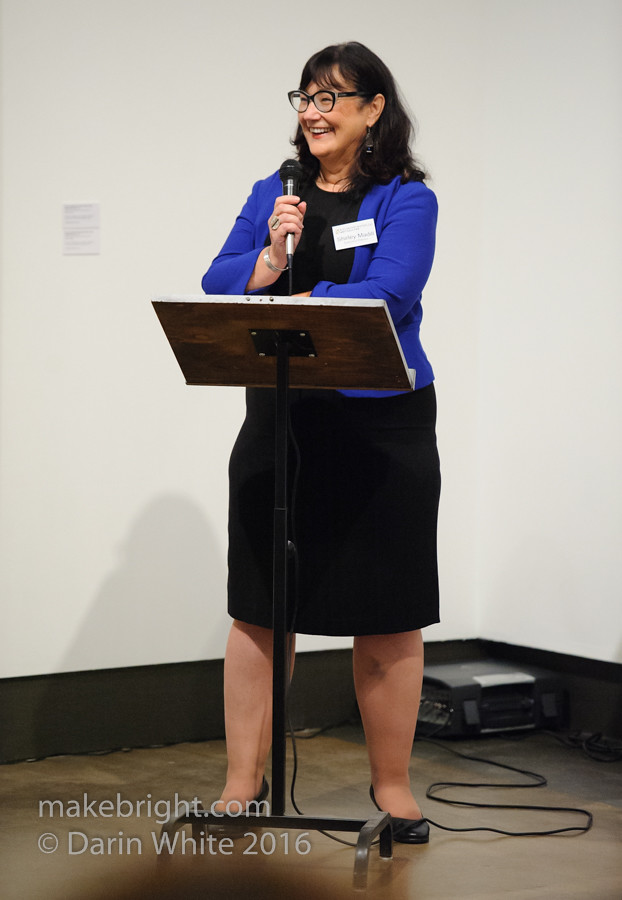 Smiles from KWAG ED Shirley Madill. This is a significant inflection point for the gallery. Congratulations. 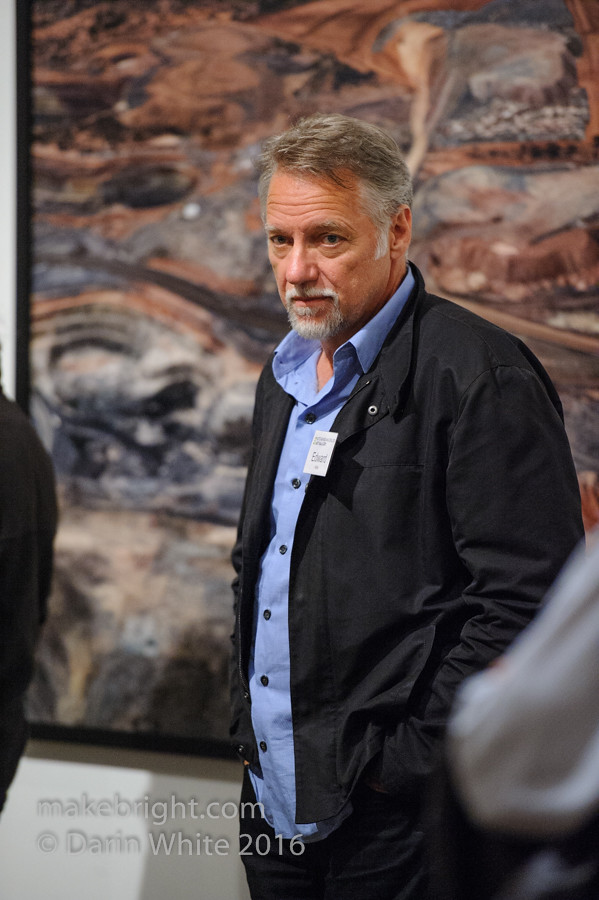 Ed, waiting in the wings. 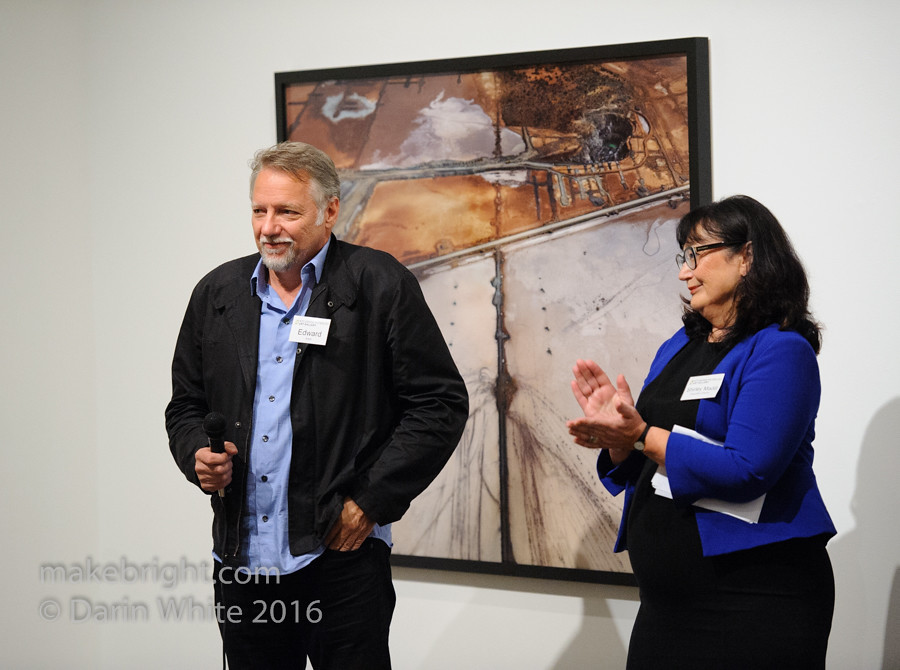 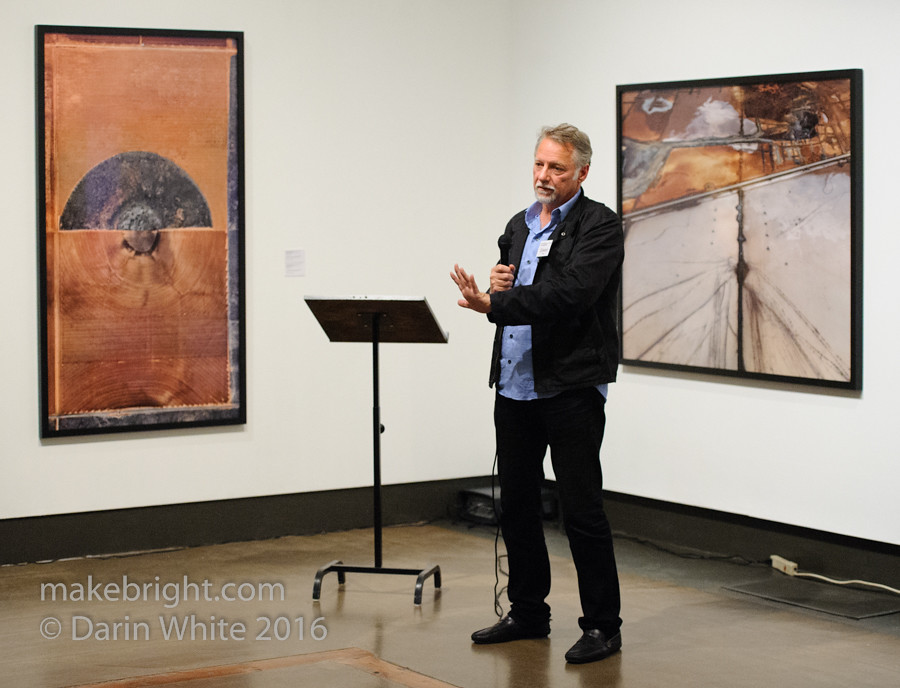 It’s interesting to consider, and this may sound obvious, how your whole life experience informs and shapes the work you do. True in general and doubly so in creative endeavours. This is very evident in mid-career (whatever that means) artists. The experience shows.

One of Ed’s early shows was right here at KWAG in the ‘80’s. The gallery acquired more of his work over the decades and this latest gift of work is a singular and delightful development (no pun intended). 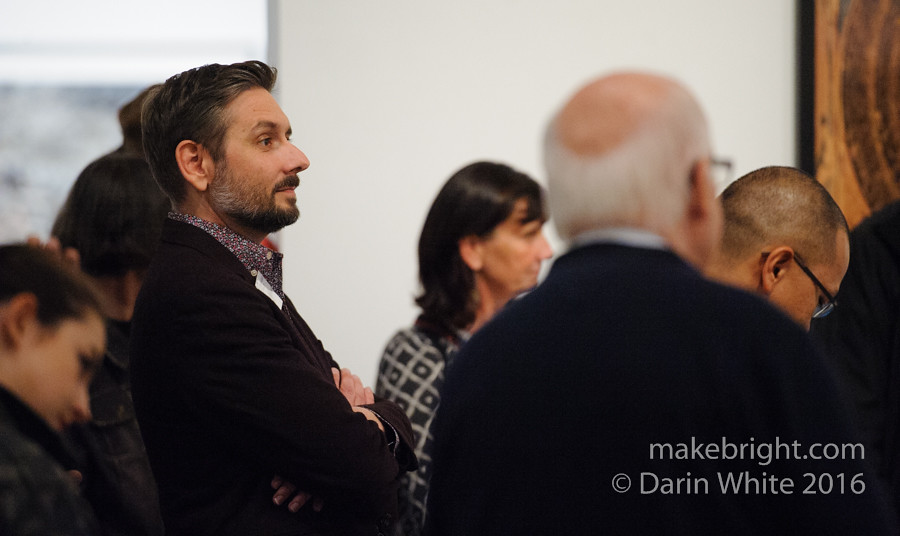 My friend Bryce Kraeker who is president of the KWAG board was thrilled with the show. After the talk he said his only wish would be that there was wall space to hang more of the collection.

Speaking of friends, thanks to Bob McNair for putting this talk on my radar. 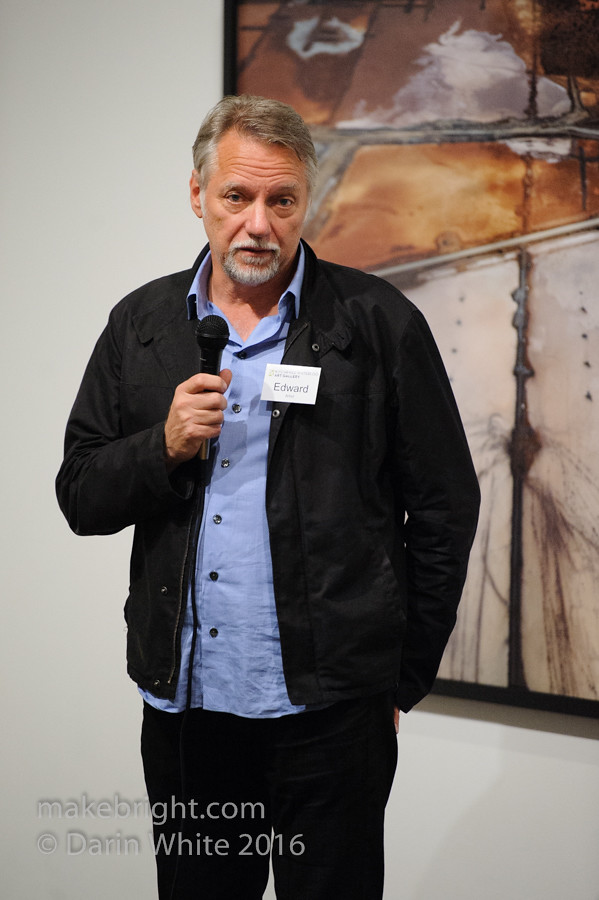 I took a lot of photos of Ed. This seems to be the way of my own work: capturing images as a sort of pinching-of-self, a process of recognizing “hey, this is really happening.” This happened when I photographed Larry Towell at Laurier, and Barbara Davidson at FLASH and Louie Palu at the RIC. 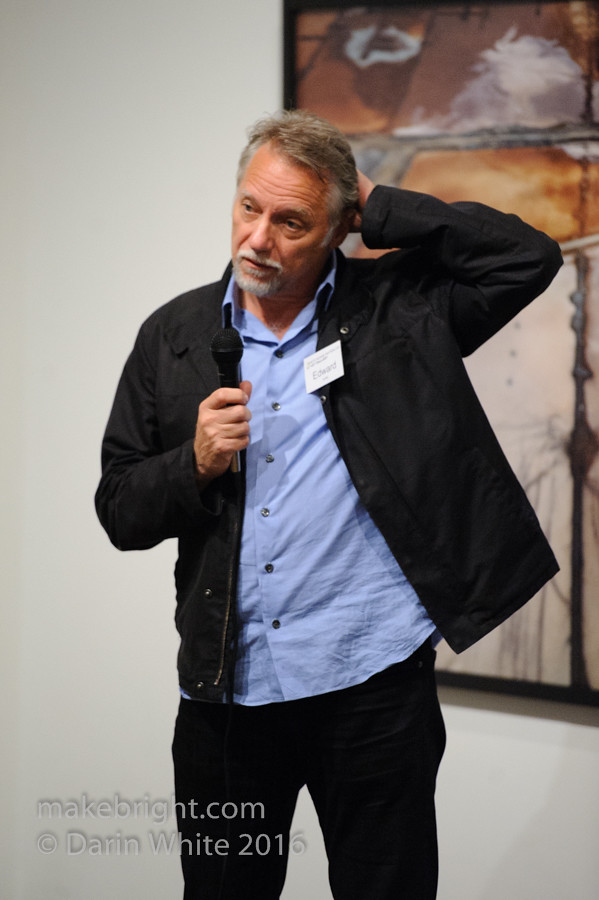 A question from the audience around the superposition (my word) of beautiful images and ugly realities. Ed joked that there is some lighter work and I think it must take a well-developed sense of humour to persevere in such a sobering series. I think about all the work setting up the circumstance in which the images could be made. The inevitable setbacks, the legwork, the technical challenges and the image captures. And even then the work’s not done: these images, shot digitally with a 100 mega-pixel Hasselblad, are stitched together into the larger finished work, colour corrected and printed.

Ed described shooting large-format cameras early on (think: giant camera, hood over your head, 8×10” negatives) and told us that he has always shot with permission and cooperation of location officials. “It’s kind of hard to sneak around with a large format camera.” 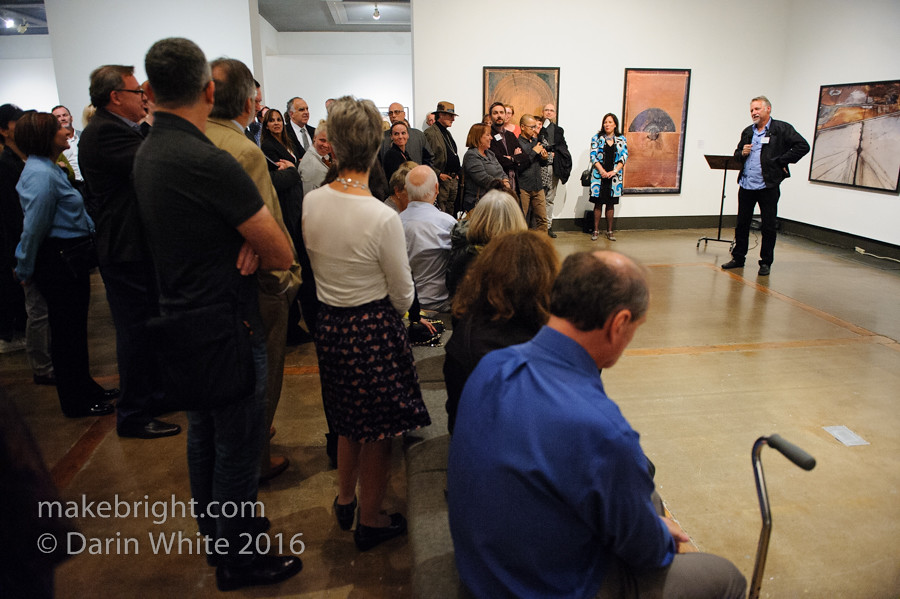 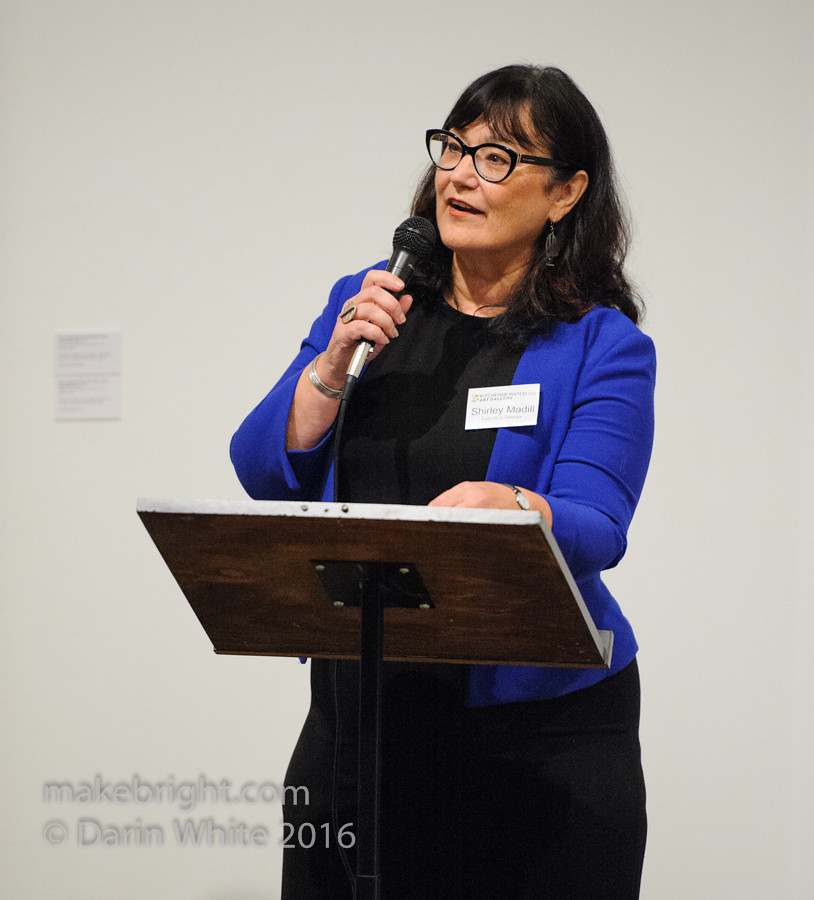 And that was it, save for thanks to sponsors and to Ed. 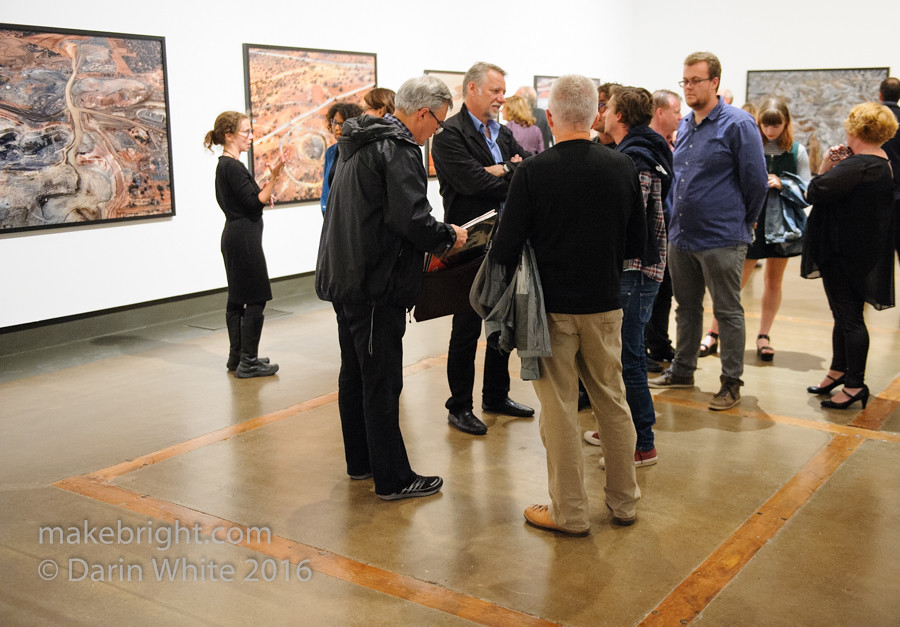 This may be Nik getting that autograph. Ed stuck around to chat, despite having a long travel day Saturday to another quarry to shoot. I myself had many great conversations that night with friends old and new in the crowd. I’ll definitely be back for a second and third viewing of this show before it comes down.

Thanks to Ed Burtynsky for his generous gift to KWAG, and really, to us. Well done, KWAG.

At the corner of Queen and Otto, this is Kitchener.

This entry was posted in art, event and tagged Kitchener, KWAG, photographer, photography. Bookmark the permalink.