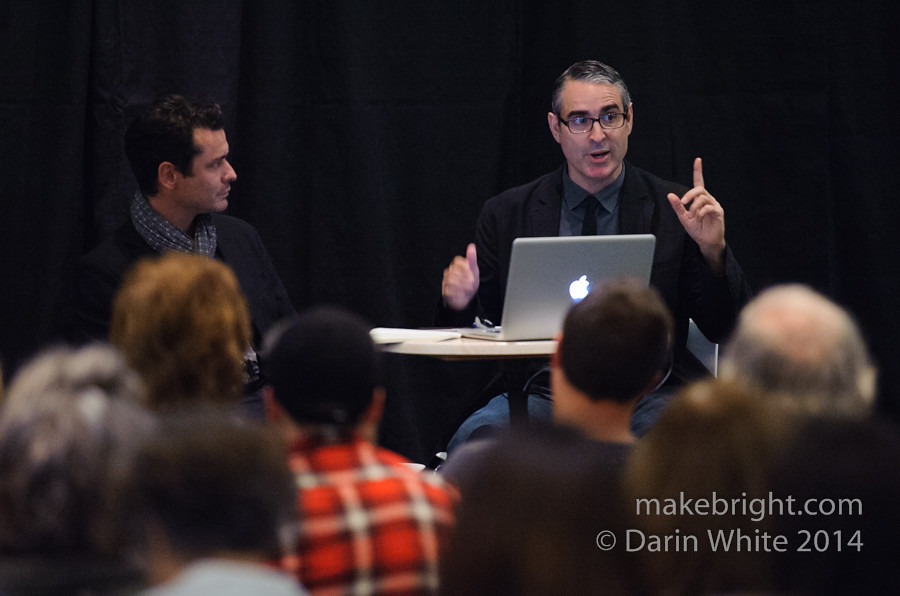 World-class photog, Louie Palu, spoke at the Ryerson Image Centre in Toronto last night and frickin’ blew me away. I was positively sizzling with inspiration when I walked out of there two hours later. Louie (above right) gave this talk as part of curator Thierry Gervais’ (left) show DISPATCH: War Photographs in Print, 1854-2008. With something like five tours of combat photography in Afghanistan, a project covering the Mexican drug cartels, a photographic examination of detention at Guantanamo Bay, and many more riveting gigs, Louie is the real deal. Check out his bio.

I had the massive good fortune to sit down for porch beers with Louie this past summer at Tony Reinhart’s house. Tony and Louie are friends from their work at The Globe and Mail years ago. A couple of years back when Tony and I collaborated on our DISCONNECT show, he said I should check out Louie’s work. I did, and the hook was set. Sitting around Tony and Tenille’s kitchen table while Louie walked us through his gripping images from Mexico and Guantanamo reaffirmed my belief that photography does have material impact and can raise issues above the modern info din. It can change the way people think.

The TL;DR: the place was jammed, excellent Q&A, go see this show (through Dec), and I’m lining up early for when (hopefully) Louie decides to teach. Can anyone point me to a video of the talk so I can go over it again? 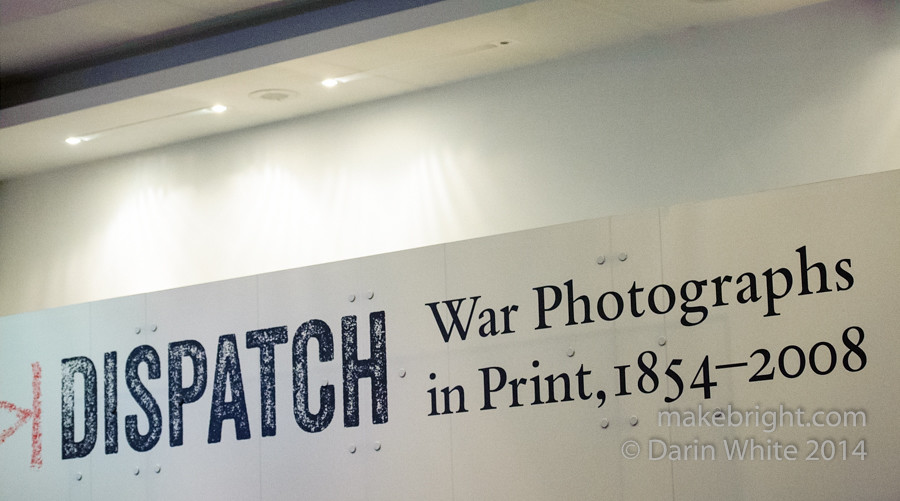 I had intended to give myself lots of time to get over to TO yesterday, but I was really cranking to get out that piece on kwartzlab, then chatted with Tony about his piece on content creators getting paid, and then I took a side shopping trip to discount photo gear shop Cowboy Studio on Dixie Rd. By the time I had finished up in Mississauga, I thought “Ok, I’ve got an hour to get up to Yonge and Shuter, no problem.” That would have been true if it weren’t construction season and the Gardiner wasn’t narrowed. Doing some Starsky and Hutch driving up Yonge Street and racing down the stairs from the parking garage I walked into… 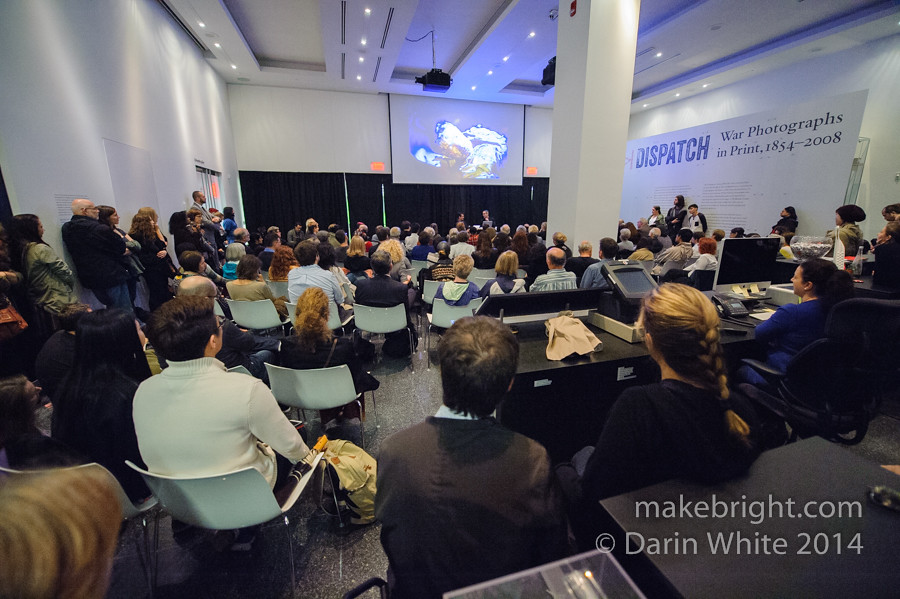 this. And 30 seconds later, curator Thierry kicked off the show. Just in time. Standing room only. 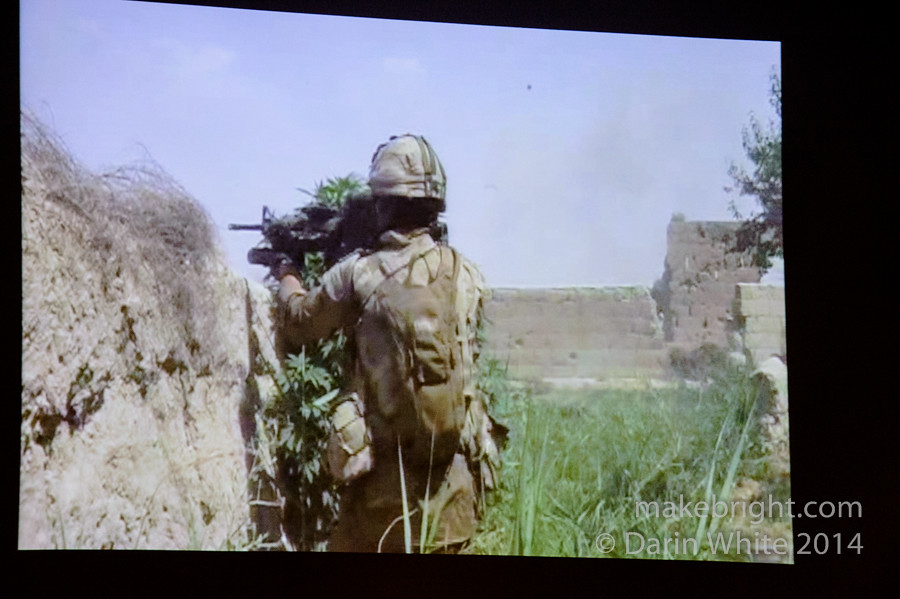 Louie gave the heads up for people sensitive to the sound of gunfire that some of the video content would potentially be disturbing. He noted that still photos can’t tell you what war sounds like in the way video can, and it also doesn’t always capture how fluid and chaotic that experience is. Nothing captures the smell of war. You only get that when your boots are on the ground. This video above was shot in the middle of a firefight. Louie pointed out that there are always at least two sides in a conflict and you don’t often read or see the impact on the “other” side, which is to say the side of popular western democracy. 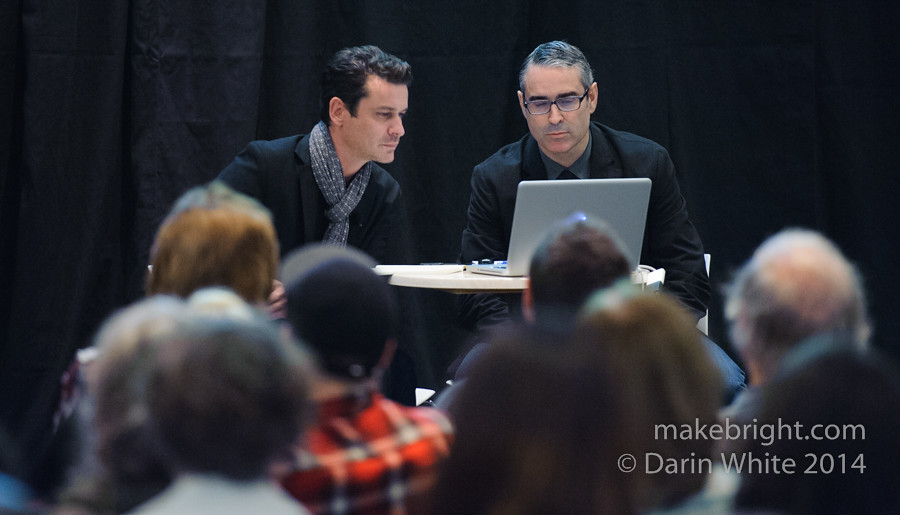 Louie carries a straight-forward rig in conflict zones: 2 camera bodies, a 35mm and 50mm prime lens. Fancy lenses are for back in the more peaceful world. As he described in a brief 10-minute intro before Q&A, the motivation for the work is storytelling with the goal of raising difficult issues of the human condition. He grew up in a community, including his own parents, who understood firsthand the costs of war from World War II in Europe and they shared those stories. 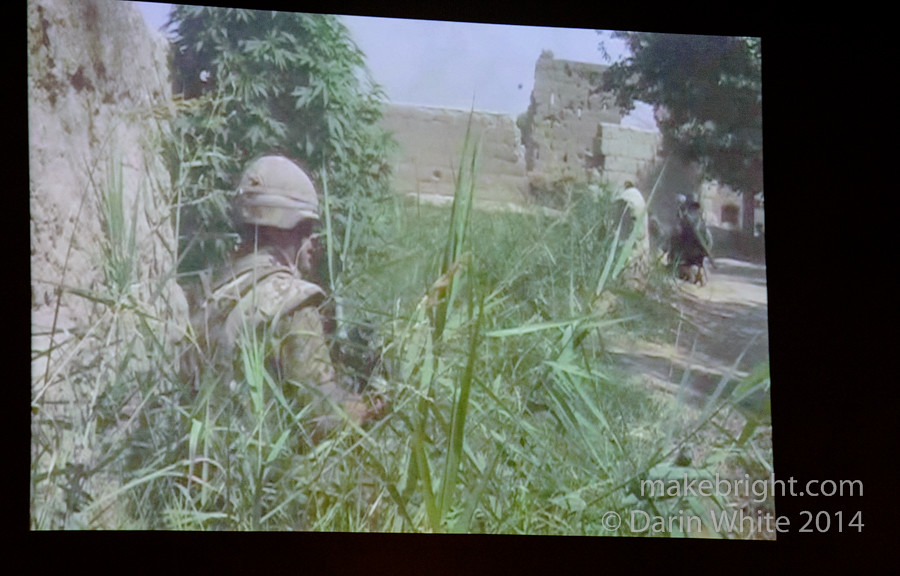 On one Afghanistan tour, a CBC crewmember had his foot blown off by a landmine. The CBC responded by restricting their staff to delivering reports, “live hits”, from within the base. No more “over the wire” excursions. Louie, being a self-funded entrepreneur, offered to take a video camera into the field when he went on patrol and get footage for them, provided the camera was very compact. He also insisted on maintaining copyright over that material. So began captures that now fuel his movie project Kandahar Journals with Devin Gallagher. 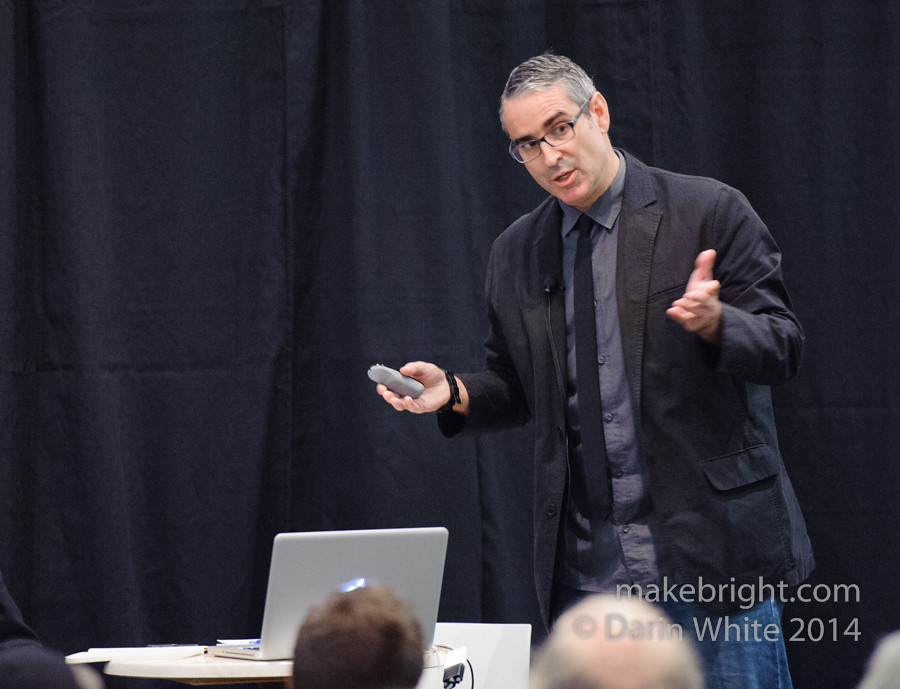 Louie talked about adhering to his own personal code of ethics, aligned with the NPPA code. He doesn’t stage the shots. He doesn’t mess around too much with the results. When asked if he has had to choose between helping/intervening or photographing, he said he has many times provided first aid in the field and has grabbed a corner of a stretcher to medevac wounded soldiers when there were only three able-bodied soldiers on hand. He said if he was asked to “pass the machine gun” he would probably say no. He described various levels of intervention, one being the photography itself. Physically or verbally intervening can very quickly have fatal consequences in combat. When asked about the risks of his work, he said he very consciously assesses risk to ensure he returns home in one piece. 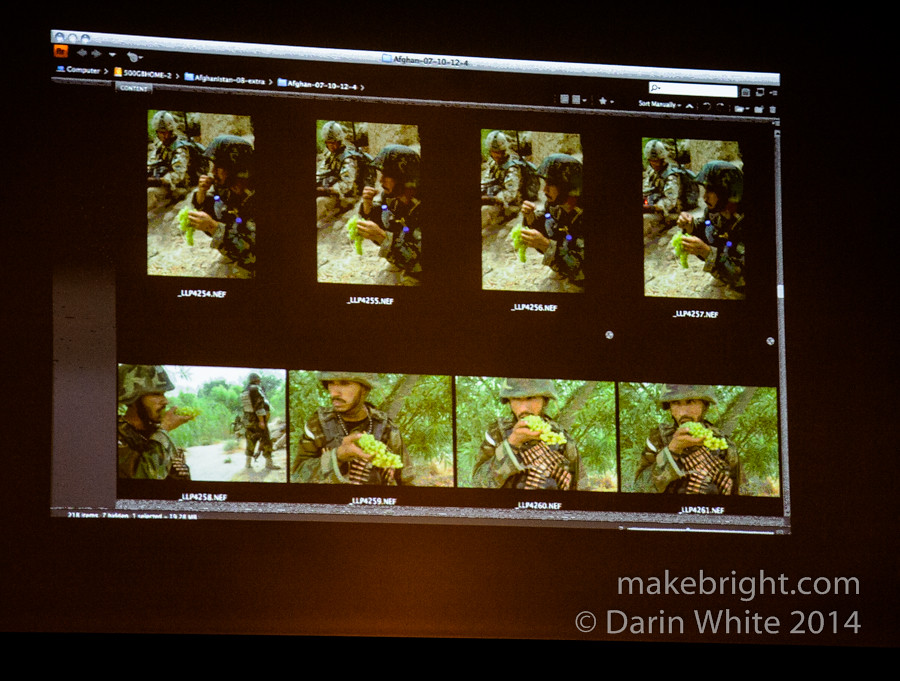 When asked about consent for the work he recounted being thrown to the ground by soldiers who he had just photographed carrying their dead or injured buddy. He also noted that every time that happened, the soldier who roughed him up came back and apologized and said they wanted Louie to show this to the world. Sometimes you don’t take the photo, he recounted of a particularly disturbing medevac trip in a helicopter with a gravely wounded soldier. He just looked out the window.

Out on patrol with soldiers, Louie was asked “What are you doing here?” Louie: “Getting to know you.” And I suspect, earning their trust and respect. Those relationships made possible a very powerful series of portraits of soldiers just returning from patrol. They are unflinchingly direct. And I think they humanize the situation: that these are real people who come from hometowns and have families. It’s interesting to note that he got to that particular series after realizing he had a lot of photos from “out on patrol” and was looking to capture something different. He said generally the harsh light of Afghanistan made for not ideal photos, so he found a bunker with just the right amount of light and a uniform background. Each portrait only took 2-3 minutes. And they landed on the covers of a whole lot of magazines.

To a question on the impact of the work, Louie responded that he does believe the work has impact and influences change. He cited the Geneva Convention and foreign policy changes as measures, however imperfect, of progress. He said we, in the audience, are all involved whether we think we are or not. We vote in governments, and those governments execute foreign policy that sometimes involves killing people. When asked if photographing war was sensationalizing it, he said he simply tries to show what he sees and lets the viewer decide for themselves. 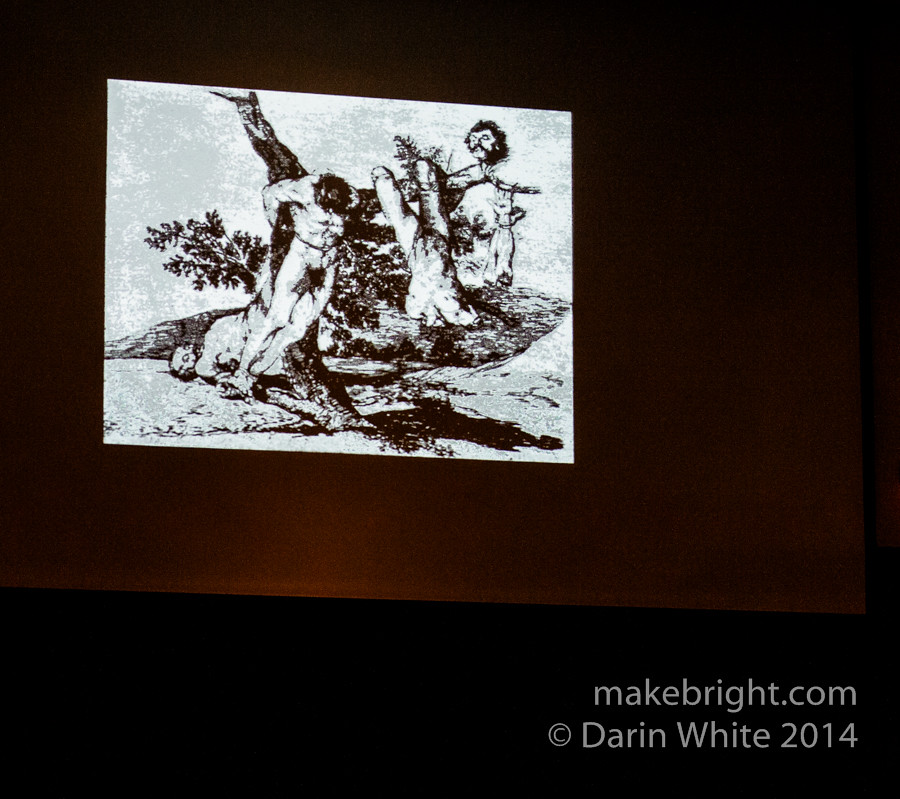 Louie called out the influence of art in his work. He referenced Caravaggio’s treatment of light and took us back to Goya’s etchings from the series The Disasters of War, shown above. He pointed out that Goya did this, not as a one-off painting, but intentionally as an etching that could be printed over and over and distributed. An echo of today’s distribution via a myriad of media channels. Most interesting were photographs Louie had taken of his work in the context of their final output: a website showing a portrait of an American soldier just back from patrol is juxtaposed with an ad for a matchmaking service. He asked “What does that say about us?” 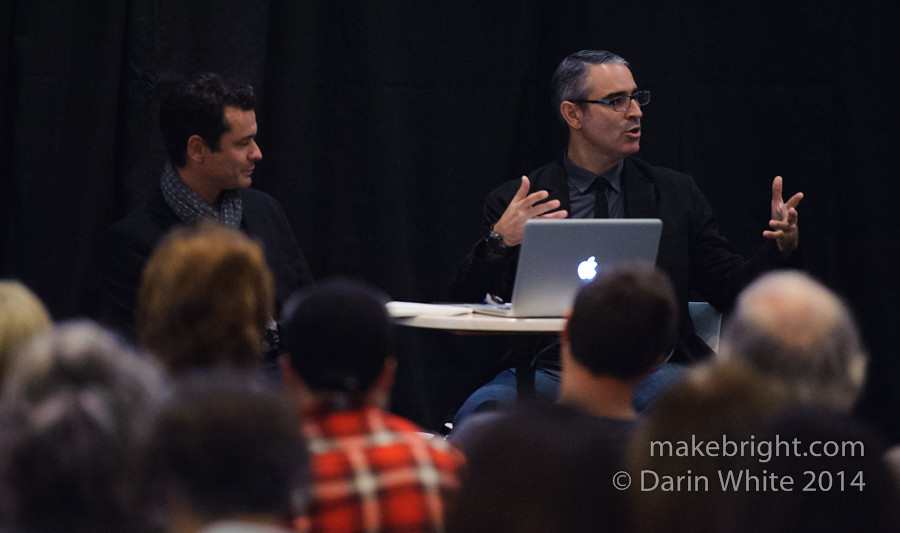 A question was asked around what he does to decompress upon returning from a conflict zone. He said he exercises, almost never drinks because that just fuzzes him out and prolongs the decompression. He visits with family a lot. He has sought counseling at points, asking “What’s this stigma around mental illness? You break your arm, you go to the arm doctor. You break your head, you go to the head doctor.” He acknowledges that some colleagues just stop going back into conflict zones as a way of self-preservation. 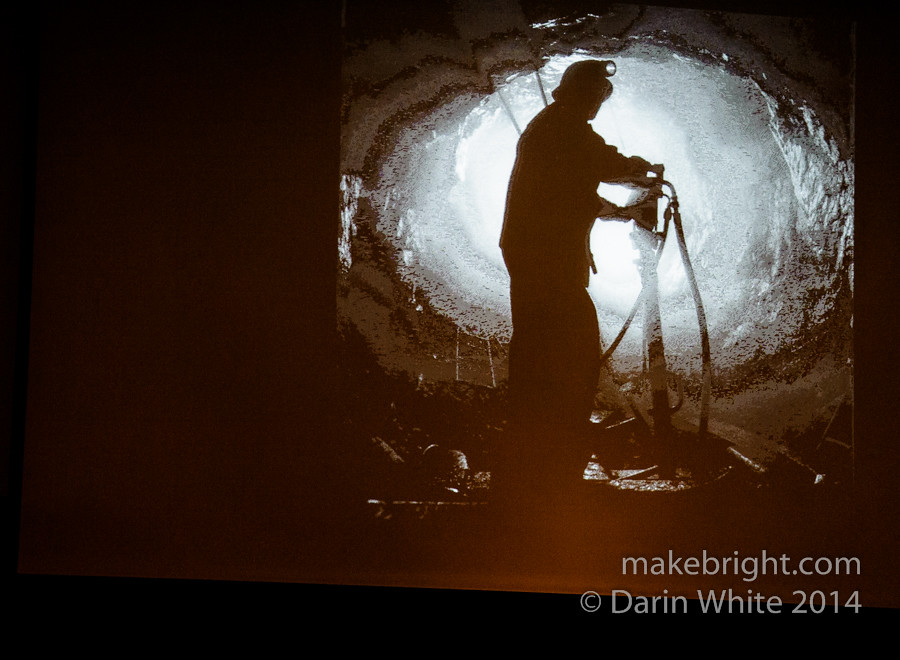 “Want to know where all the metals in your phone come from?” asked Louie. And the associated human cost? His work on human conflict extends beyond straight up fights with machine guns and missiles, to the condition of miners digging metals out of the ground that feed our insatiable appetite for electronics. Look at the photo above. My capture of the projection isn’t even close to capturing how powerful this series is and how well executed. 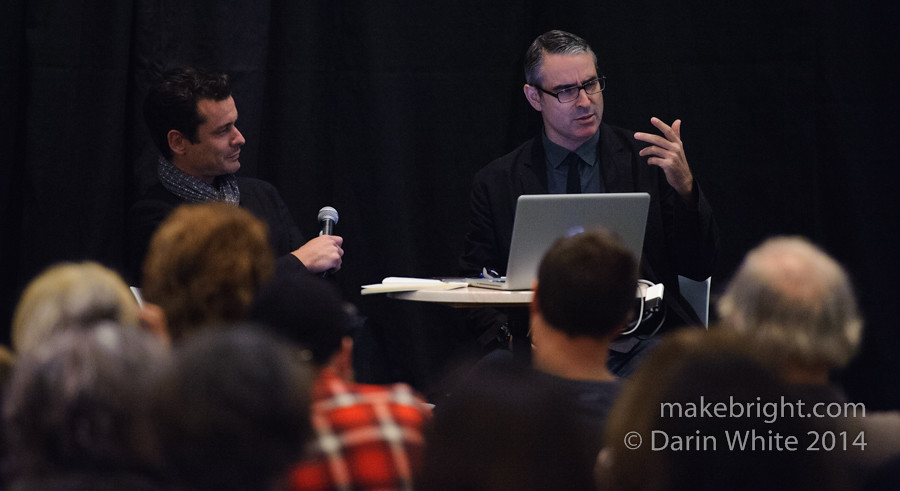 Louie touched on the difficulty of public apathy. People reading the newspaper just “turn the page”.  And he said if you see a disturbing photo in a publication, try to imagine what they are not showing you. What is deemed too shocking to show readers.

I realized after the fact that I should have recorded the talk, but I was pre-occupied trying to get some decent shots of this from the back of the room. I know this was streamed by RIC, but surely it was captured too, right? I think you, especially documentary photogs, would get something solid out of this talk. I feel like I’m missing a lot writing this all down from memory.

Let me say one thing that strikes me about Louie. To the extent that I’ve heard him talk, he seems to have his ego in check. He’s got a body of work and awards as long as my arm, and with all that I find him to just be very direct, talking about the work, with no bullshit. And that really speaks to me. 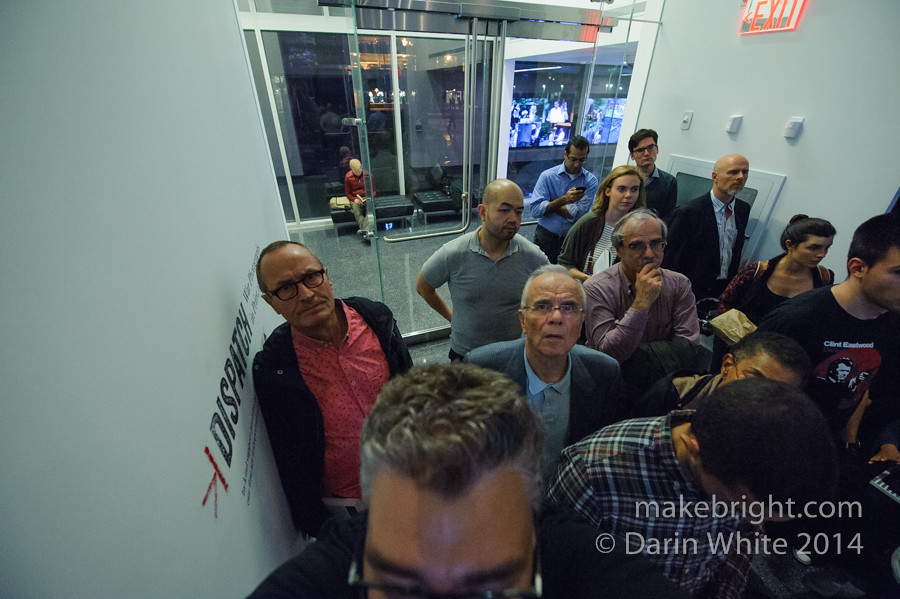 Here are the people that came slightly later than me, standing in the entryway. Popular talk. 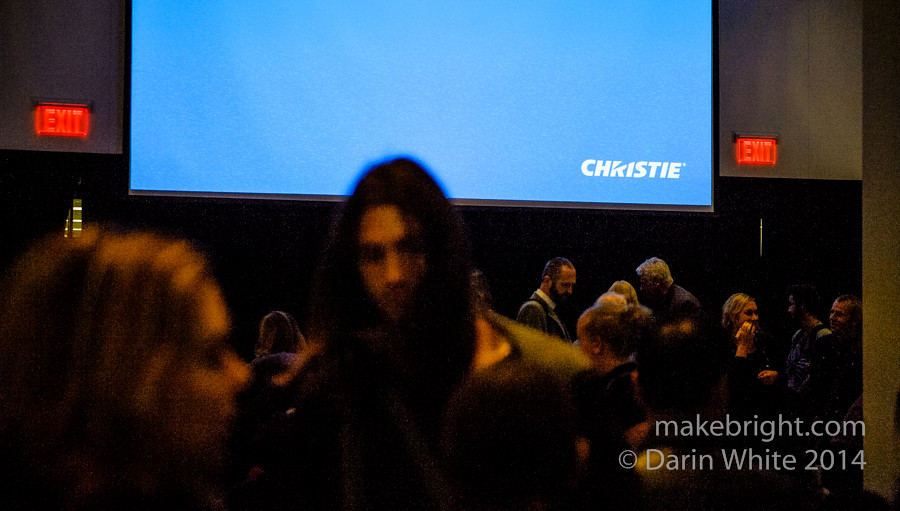 And then it was a wrap around eight o’clock. (Hey! Christie technology here too.) 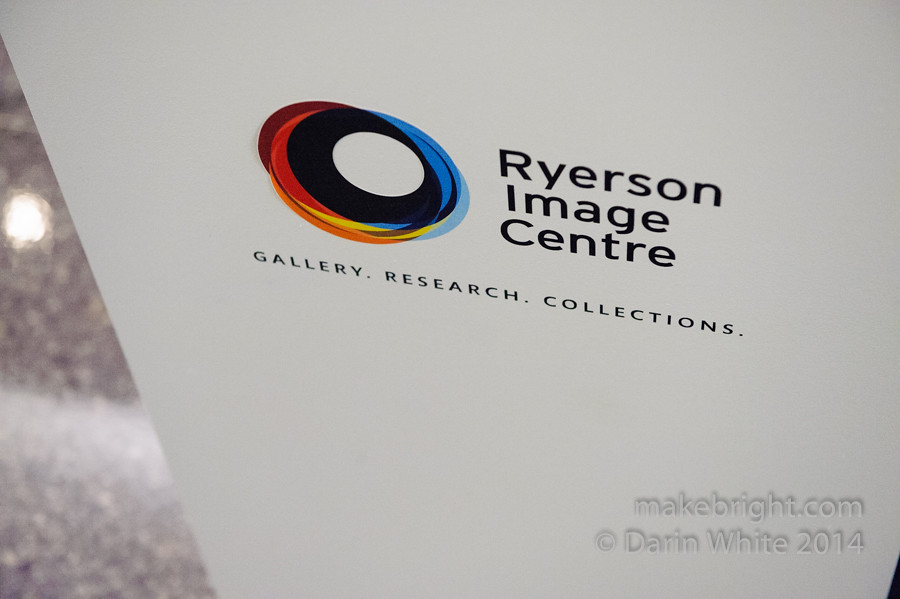 The RIC caretakers told us that the gallery was closing in five minutes so there would be no time to view the actual show. Fortunately, I’m back in Toronto in a week so I can get back there and see what I missed. 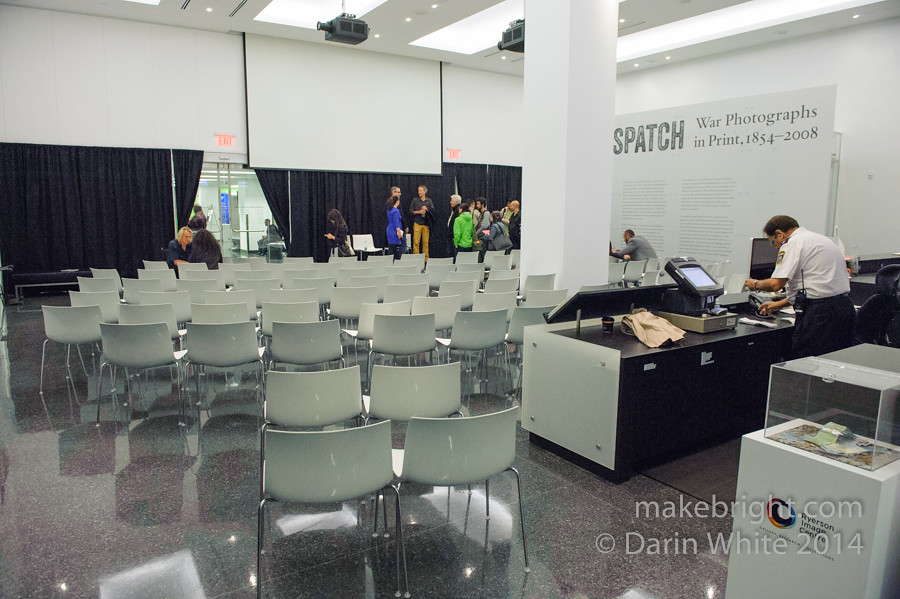 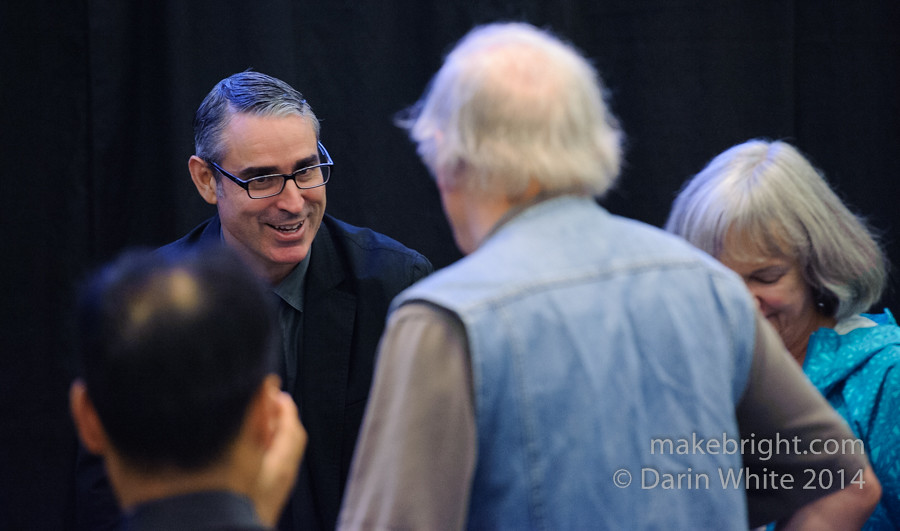 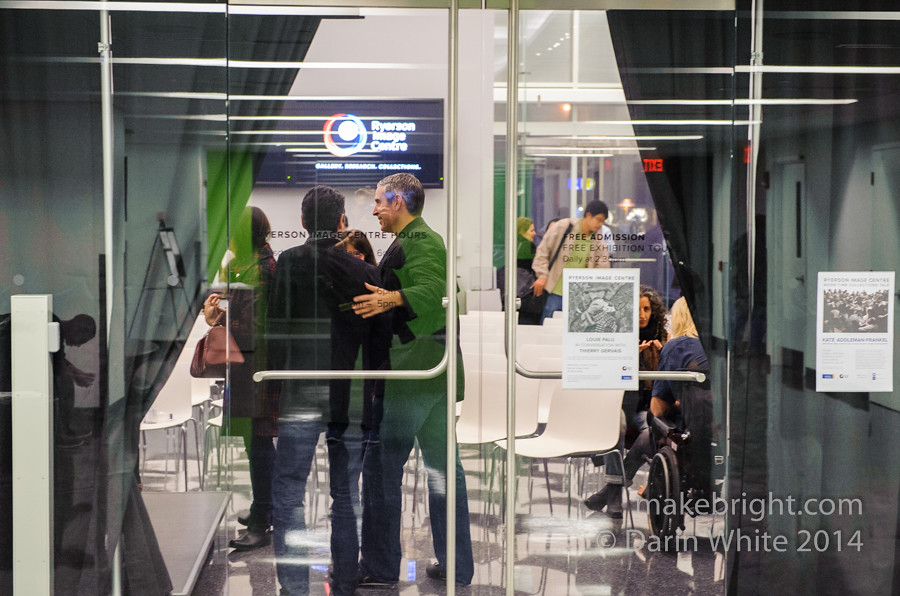 Quick photo with the curator. 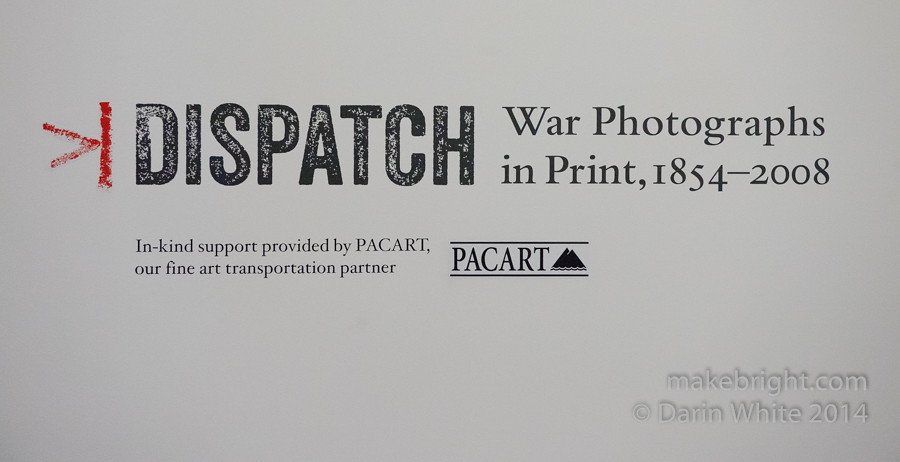 Again, this is the show. 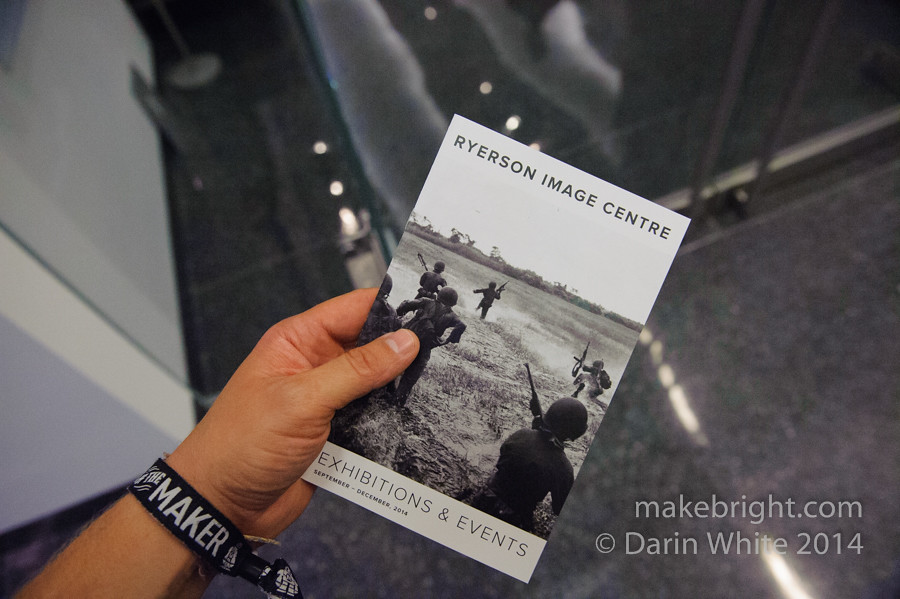 Runs through mid-December. Go see it. 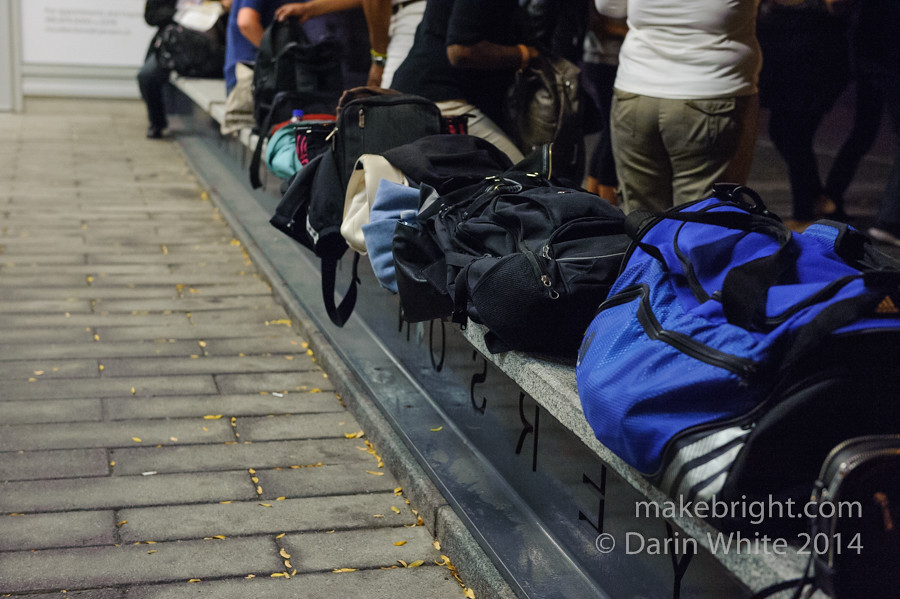 After all that intense talk inside, I emerged in the middle of what I can only describe as… 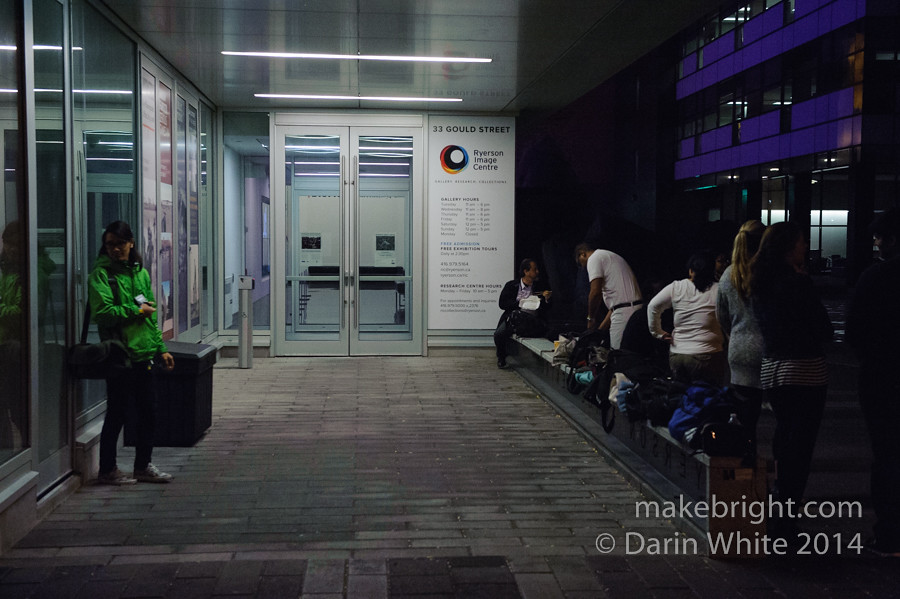 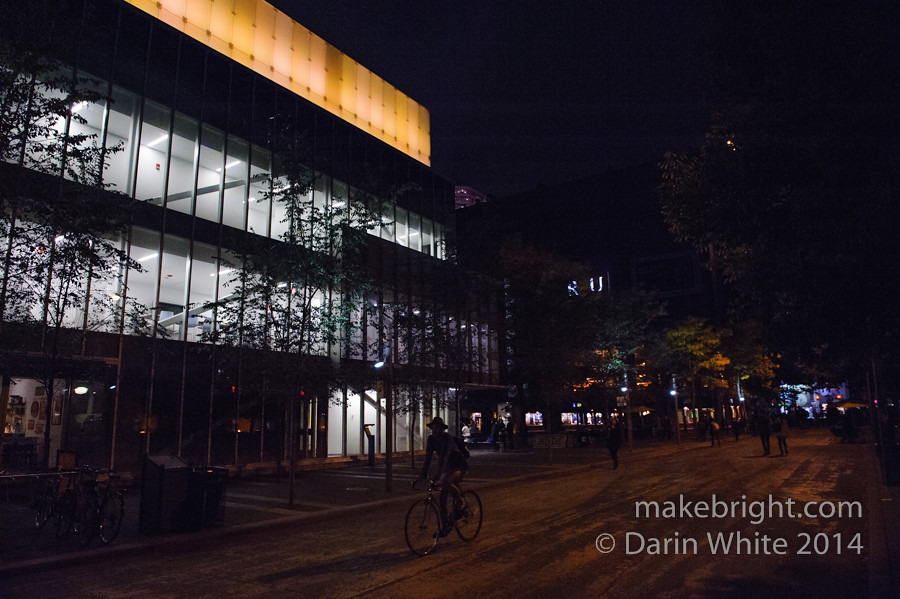 And I wondered how I had never… 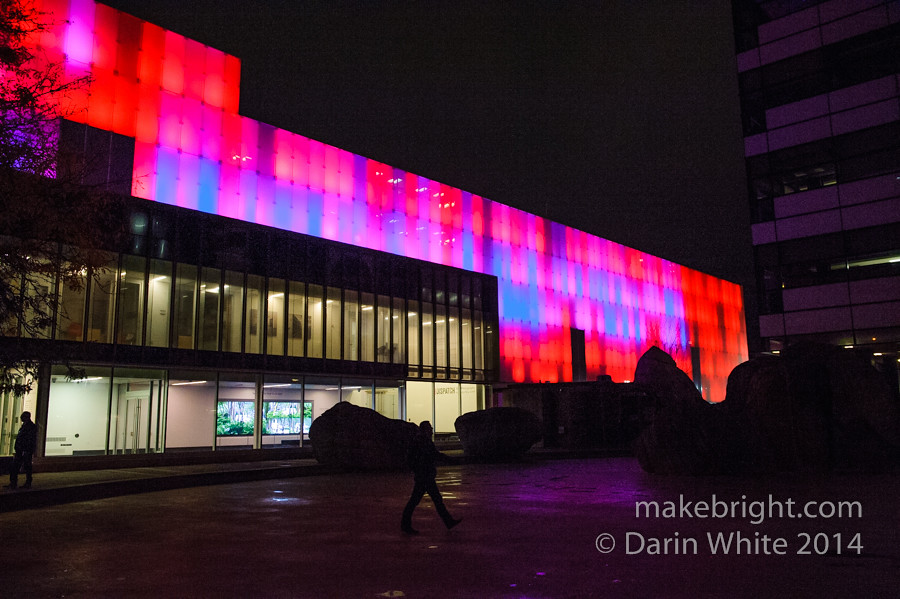 wandered around this little pedestrian mall just off Yonge Street… 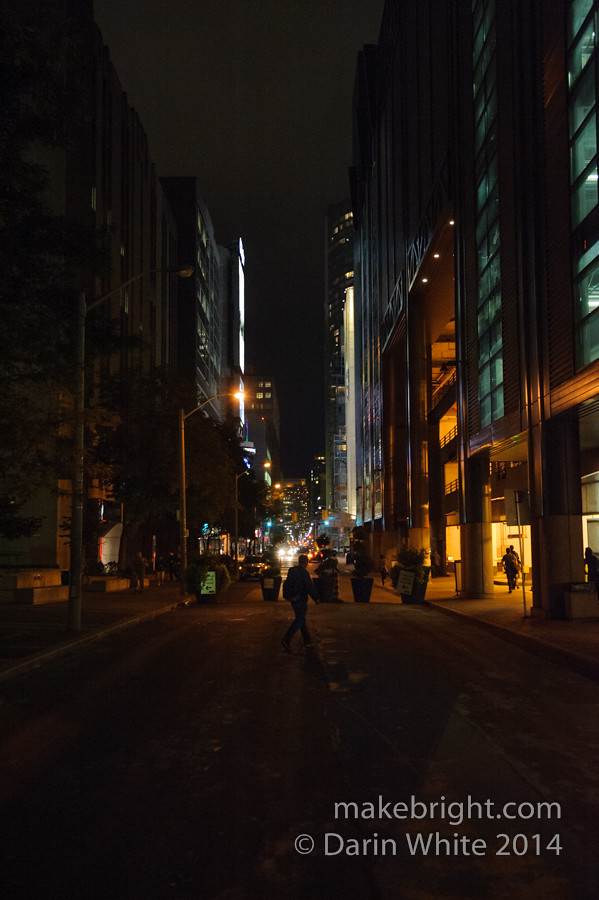 This entry was posted in fieldtrip and tagged photography, toronto. Bookmark the permalink.