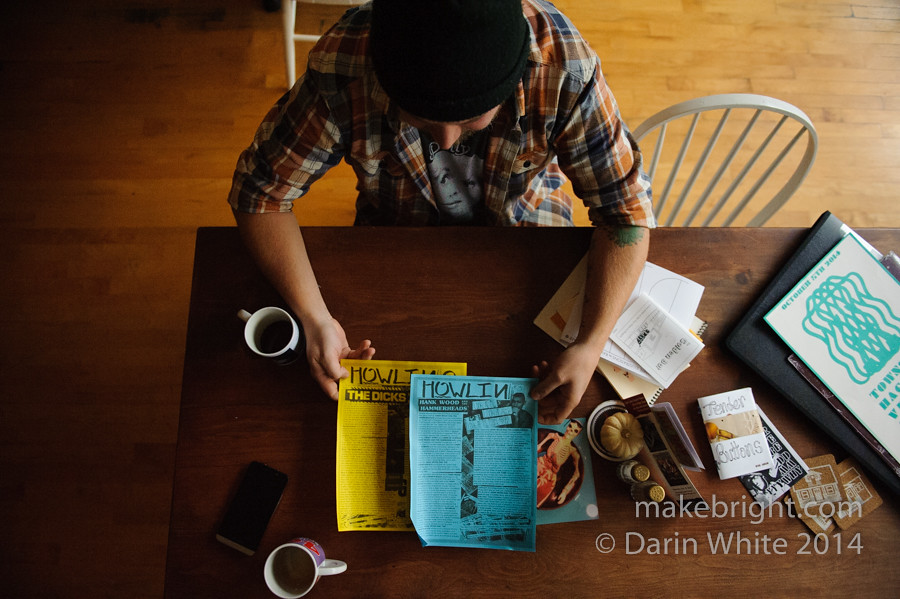 Hey, so there’s a lot going on this Saturday, Nov 1! I got the first item for your to-do list right here:

1. DIYDAY2 at Chainsaw. Marc Lecompte is back with his zine-making, music-loving band of merry makers. Lots of cool unique merch that you will find nowhere else. And Marc kindly made a table available for me, so I’m going to be there with some prints of my photos for sale. There’s an interactive/participatory vibe this year where a zine is going to be assembled during the course of the noon to 5pm event with submissions from all who want to jump in. You know where this is: Uptown Waterloo at King and Dupont Streets. Get down there and see something totally different or even buy some stuff from these hard working makers. Hey if you see me there, identify yourself as a reader of my blog by saying “I read your blog”.

Jon Johnson’s awesome poster is here if you want to spread the word in hardcopy.

I chatted with Marc about the show on Wednesday this week. Above, he’s showing me a zine by local dude Steve Horvath. Click through for the scoop. 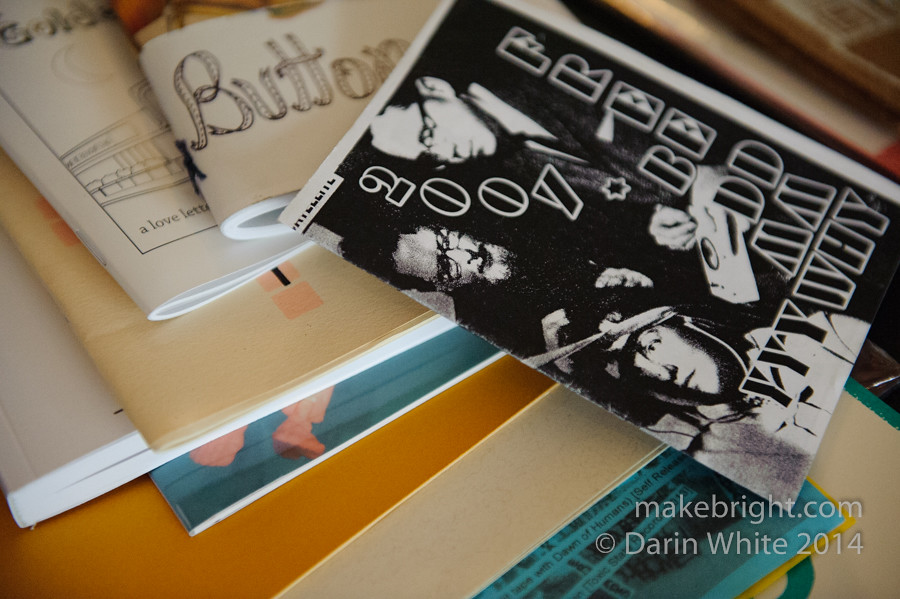 The band Day Month Year (zine shown here) was a 5-piece that morphed into 3-piece Absolutely Free.They play at 4:20. 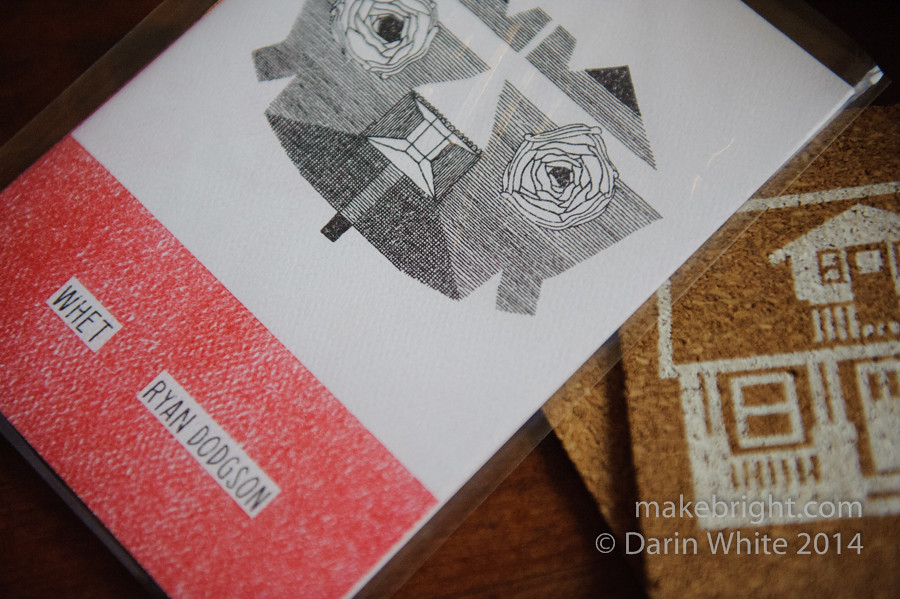 Ryan Dodgson, an illustrator from Toronto. Also a partner in Perish Publishing. 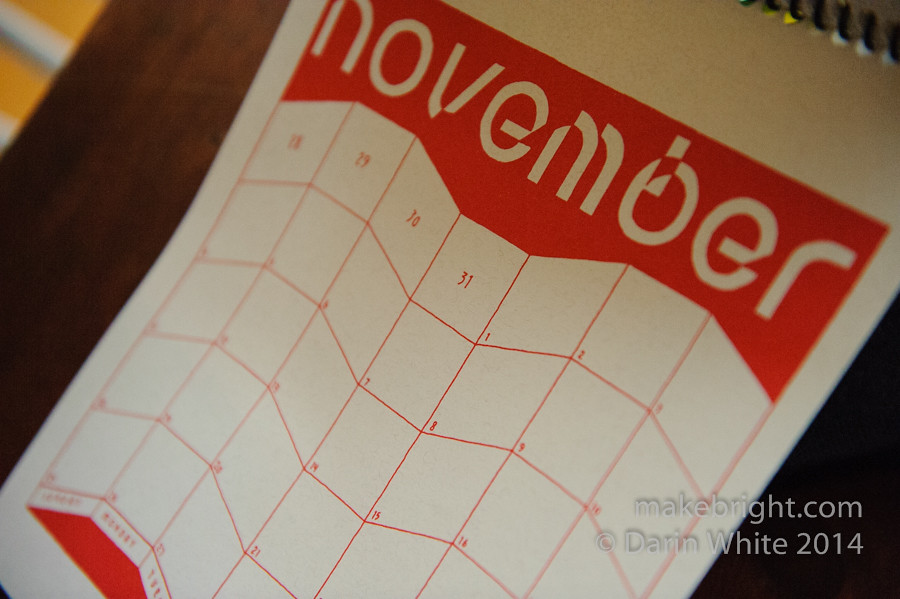 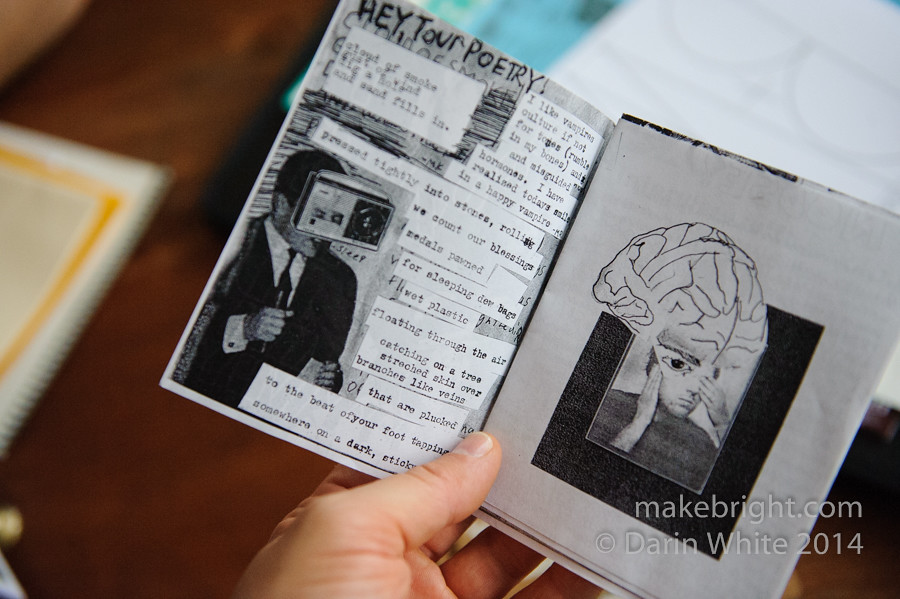 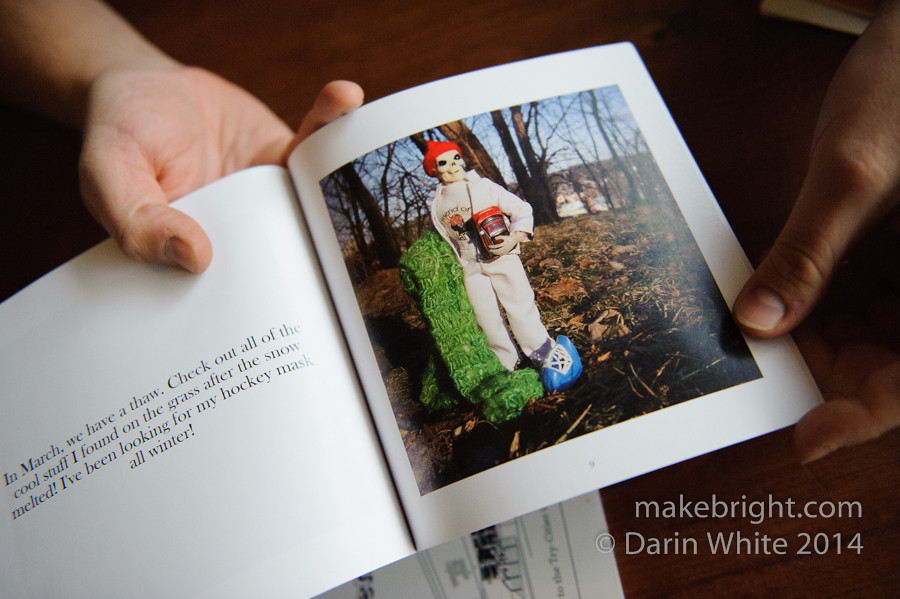 John Hendy has created a zine specifically for DIYDAY that will be available on that day (this is not it). He’s also showing over at Tri-City Stopgap pop-up this very same day. 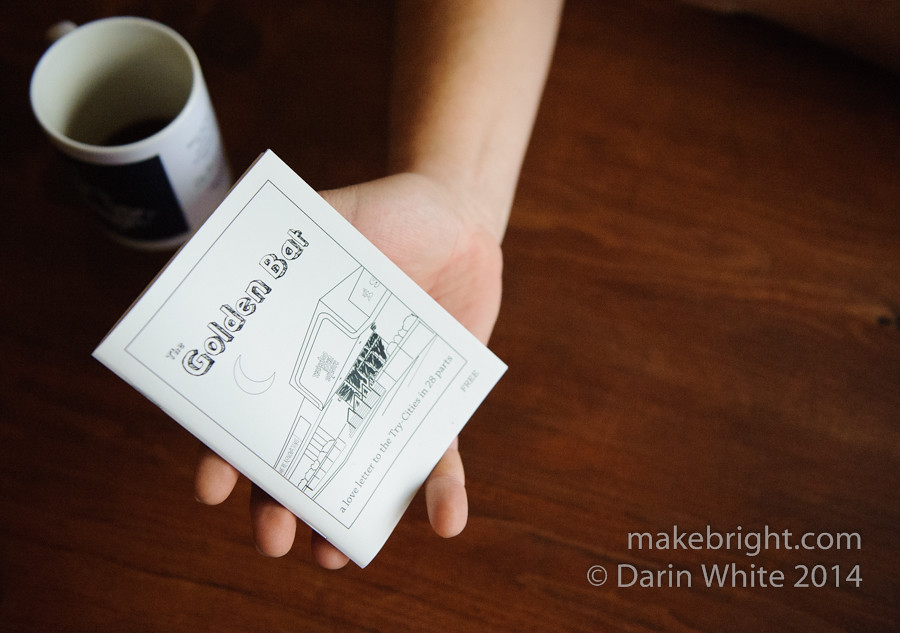 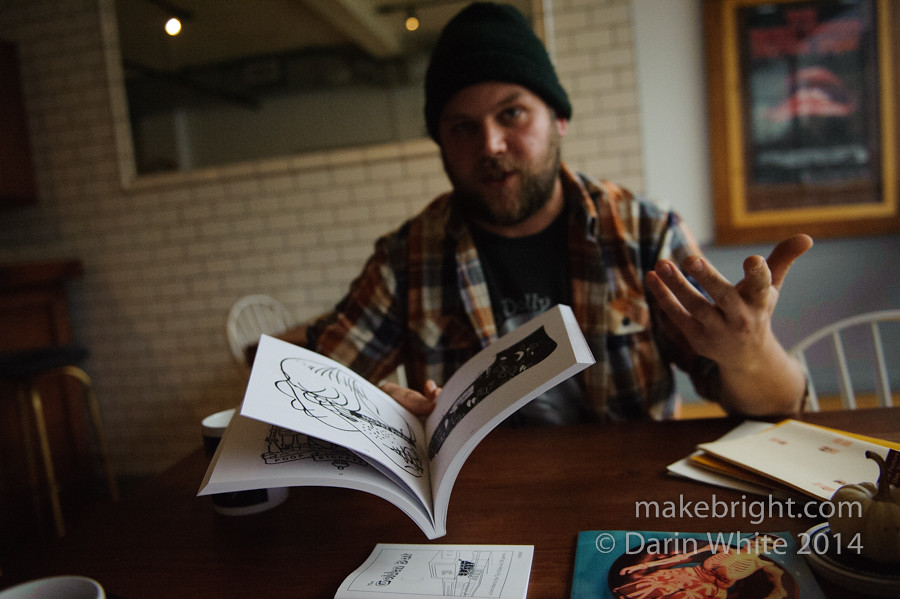 Raymond Biesinger’s book of illustrations. Raymond, along with Garrett Heath Kruger form the band The Famines which was one of Marc’s inspirations for the DIYDAY show last year. Not only because Raymond is an illustrator, but they also needed a show in the daytime. So Marc thought about how to put on a good show during the day. Marc: “That’s what DIYDAY spawned out of: me trying to put on a show for this band. I was like ‘How can I make this good for them?’” 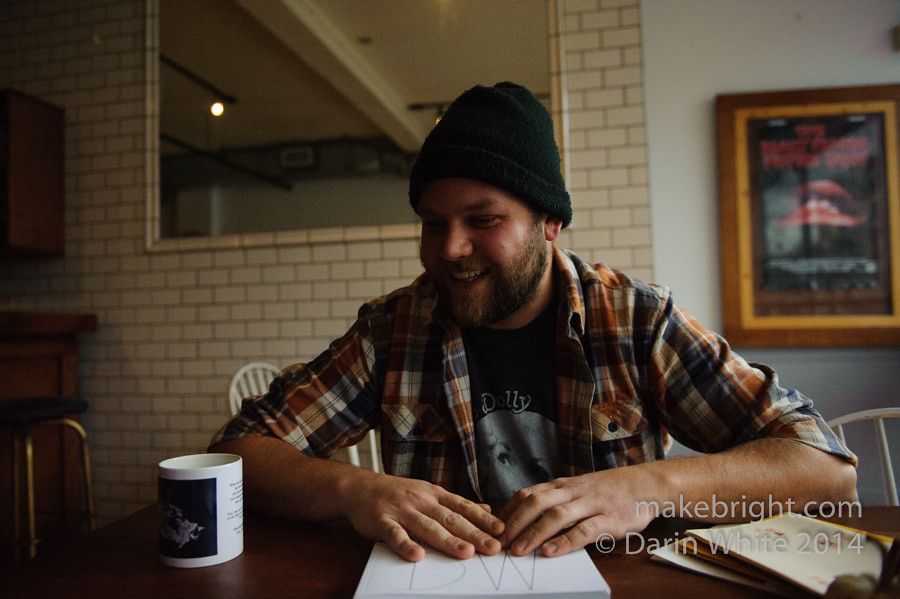 ML: DIYDAY2 is a good example. I’m putting it together. I’m not paying myself. I’ve put a fair bit of work into it. It’s an opportunity for people that are doing shit to show it to people and hopefully sell some stuff. That’s a bit of a grassroots “here’s some money for the artists” kind of thing. I’m hoping that people do come out to that with a few bucks and support the artists. That’s sort of the goal. Most of the artists I know feel compelled to do [their work] for some reason, so it’s nice when they can come set up a table and get a hundred bucks in their pocket and just feel great.

DW: Is there a charge for artists to get a table?

ML: Yeah, it’s $15 a table. It’s going to go to the printing of all the posters and flyers and we’re doing a community zine project that day, so it will help cover the cost of printing those. Hopefully I have enough to cover the cost of doing that. It sort of depends on how many people contribute. Everyone who contributes to the community zine that day, I want them to have a copy in their hands afterwards. If a hundred people contribute and I need to print a hundred issues and it’s a hundred pages, I could really eat shit on it. Hopefully that’s not the case. I want as many people to get involved as possible.

DW: So this is new, this angle of having a collective project at the event? We’re not just consumer/providers, we’re participants. Active participation. 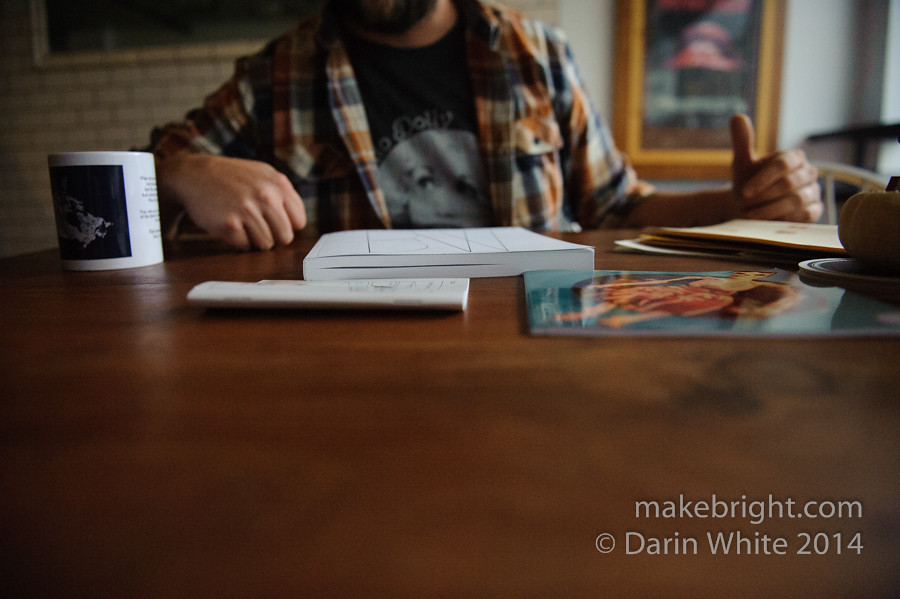 DW: What do you want to have happen with DIYDAY?

ML: I just want a lot of people to come through that door and see stuff that they wouldn’t otherwise see. Even if it’s just for that one day that they experience it. Ideally it would pique their interest and they would seek things out more often, but the idea is that people who are creating and doing things, admittedly it’s mostly things that I’m into personally. Them being able to show what they do, and maybe make a couple bucks. Hopefully. And bring to the surface that there is this strong more-underground arts community in the city. That’s the goal. And I want a lot of people to come out and see Absolutely Free. I think they’re amazing and their new album is great. They’ve been working so hard. I think they will blow people’s minds. I’m super-excited for them to play.

DW: What time do they play?

ML: They’re going to play at 4:20. (It’s just kind of a coincidence) They’re closing off the event.

DW: How can We help you? Even beyond DIYDAY. You look like a guy that is getting stuff done.

ML: One thing is, I put on these shows, and generally they’re pretty well attended, but I sometimes think that could have been better. One thing that I think would be beneficial, is I can’t get posters put up at the university without getting them stamped and I want students to know about this stuff. Aside from advertising at the [Princess] Cafe and Cheeses Murphy, I don’t have a way to get students to come to things. And DIYDAY, if that was happening when I was a student at Laurier, I would have thought it was amazing. Getting students, even high school kids. I don’t know how to engage with high school kids or university students. I always make my shows all ages, too, because when I was a teenager I always wanted to  go to shows, but they were 19+ and I was so bummed out. So I make them all ages but I don’t know how to get all ages people out to the show. It’s important for kids to do that kind of stuff in their formative years. Go out and see shows. That’s the kind of stuff that inspired me to play in bands and put on shows.

ML: If you’re ask me what I need, I don’t think I really need anything. What I would love to see in this city, and it’s something that’s always in the back of my brain, and something I’m always working towards, is a space that would be like an artist-run spot where, hey, let’s talk about government throwing money at things, take a spot, make it a place where artists can do work, where live music can happen, where people can go for live shows. Like “I can’t put on this show in the cafe because it’s too loud and will bother people in the cinema?” Well I’ll just use this space over here, that can be rented out to people that want to do arts-related events. Surely the city can sustain a place, the electrical bill and property tax for a year. Let’s say that.

ML: I put a lot of focus on live music. That’s something that I enjoy a lot. So for me, a venue that people could just use that was somehow subsidized. Could not a group of like-minded people not just get together and do it themselves and hope to pay everything every month? I know it’s a tall order, but that’s the kind of initiatives that people who are doing stuff need to take. 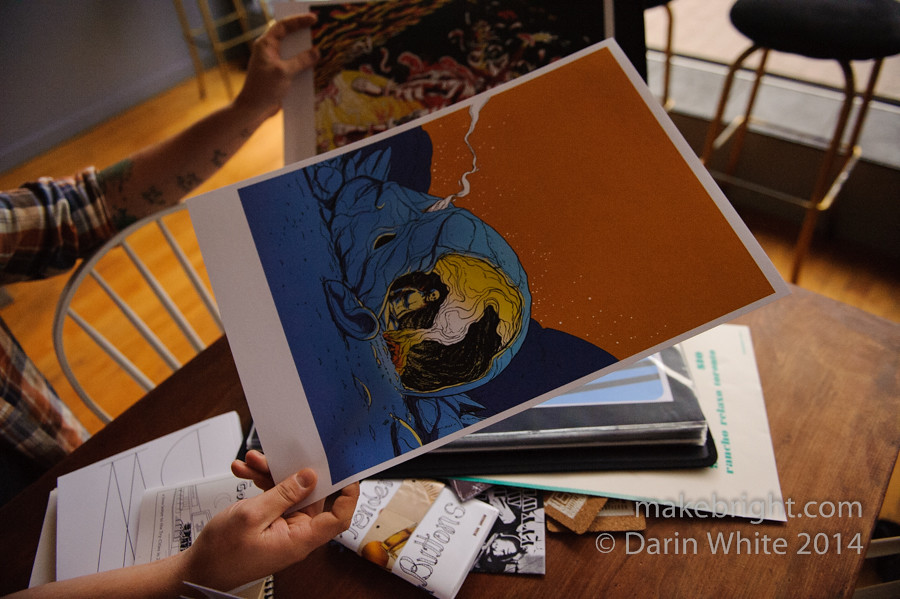 Oh yeah, Branko Vranic’s work. He did this piece as a gig poster for a show Marc put on at the Starlight in the summer featuring Ought. 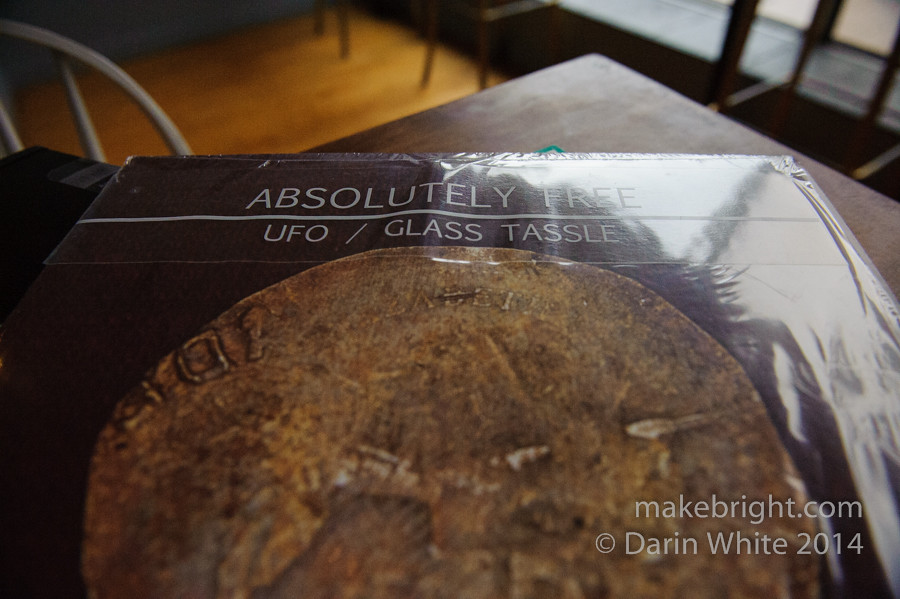 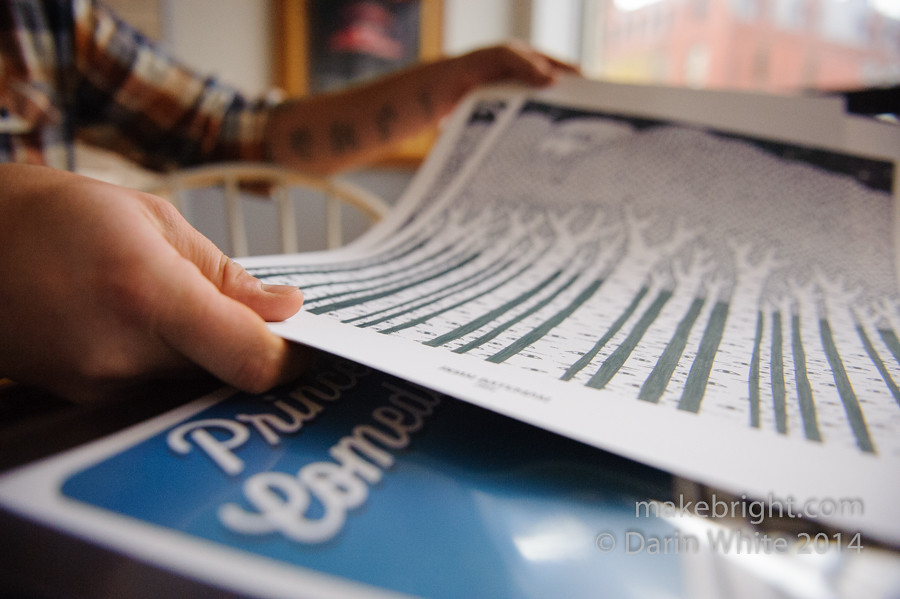 Roan Bateman’s detailed prints will be in the show. His kids go to the same school as Marc’s. Jon Johnson printed these for him digitally. Roan has done album art for Hawkeye who played DIYDAY last year. Also done art for Mean Red Spiders from Toronto. 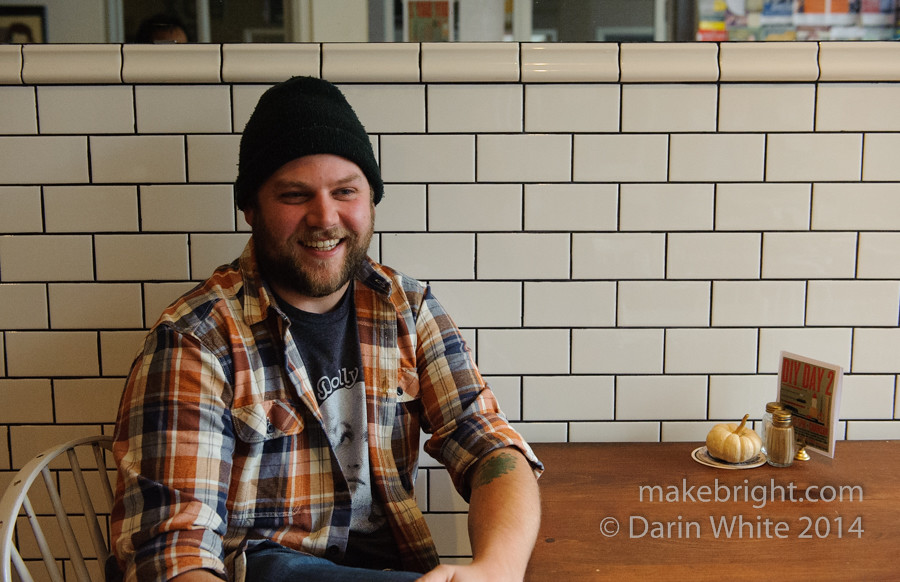 ML: One of the things that is so awesome for me is that I’ve approached people and been like ‘Hey, would you do DIYDAY?’ People that I know who have done stuff. And the fact that they’re like ‘I don’t know if I have enough. Oh you know what, I’m going to make a bunch of shit for it. You know what I mean? That to me is awesome. There’s going to be lots of new and unique things there for people to see. And a lot of stuff that people made specifically for the show. 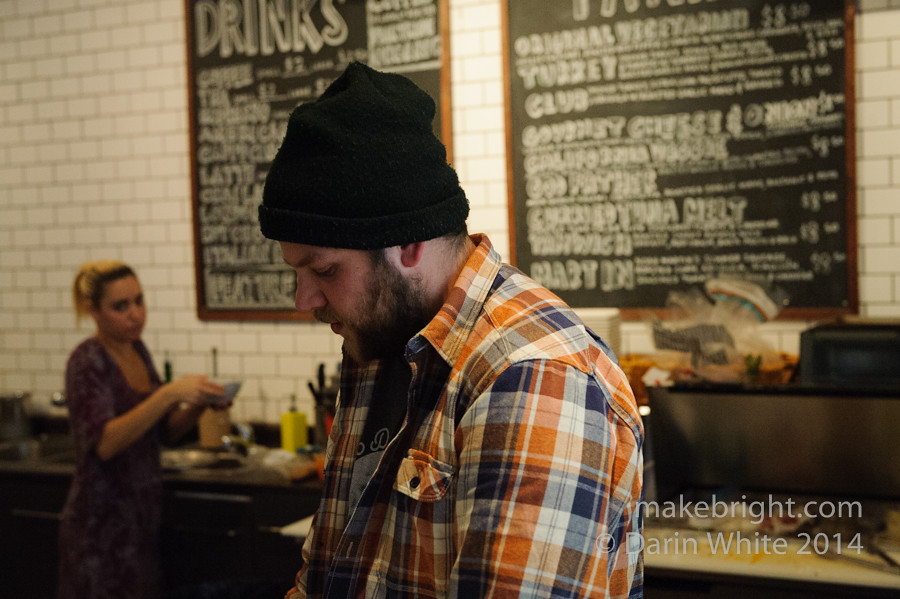 There’s Laura in the background. The thought bubble over her head probably reads “Hey, is this interview almost over?” as the noon lunch crowd starts coming in. 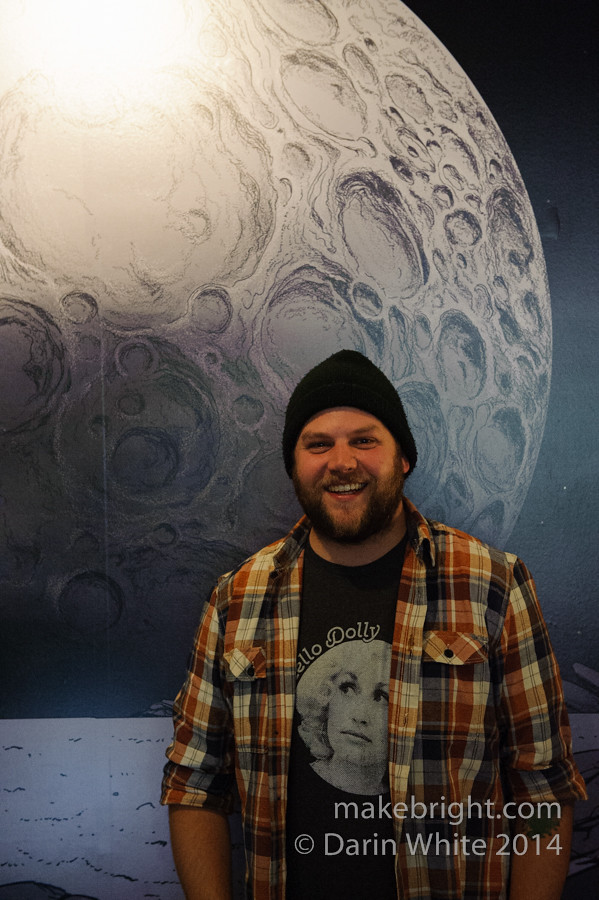 A shot back-dropped by the space scene by Branko. 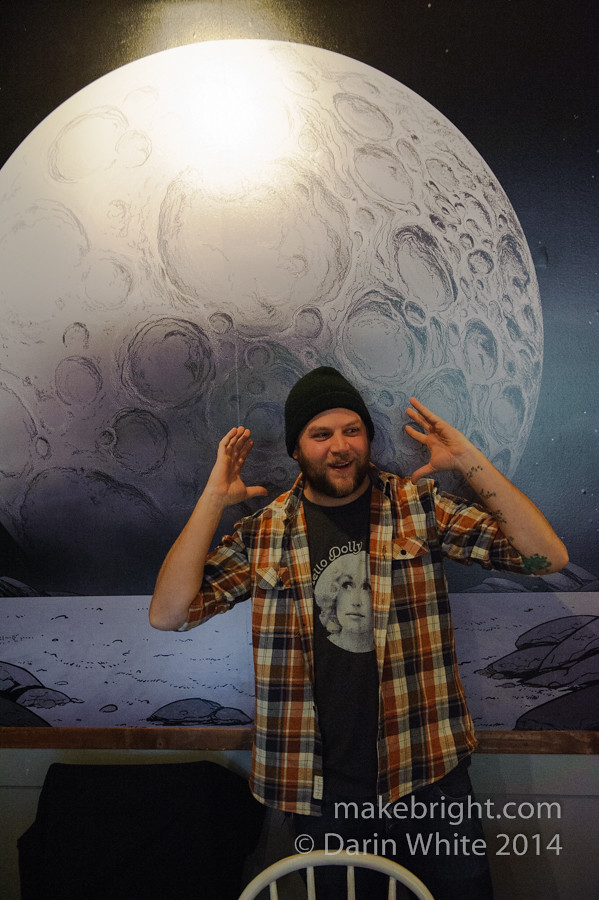 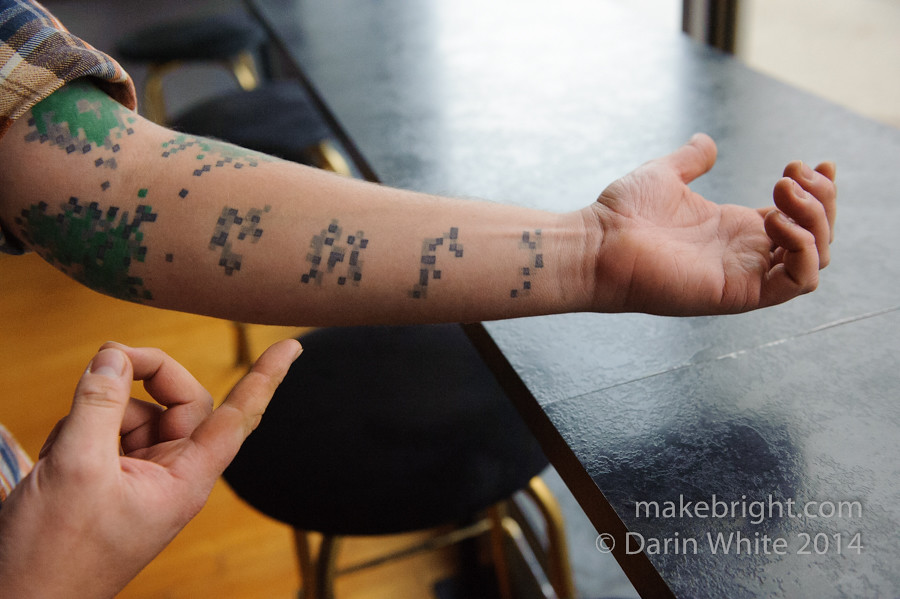 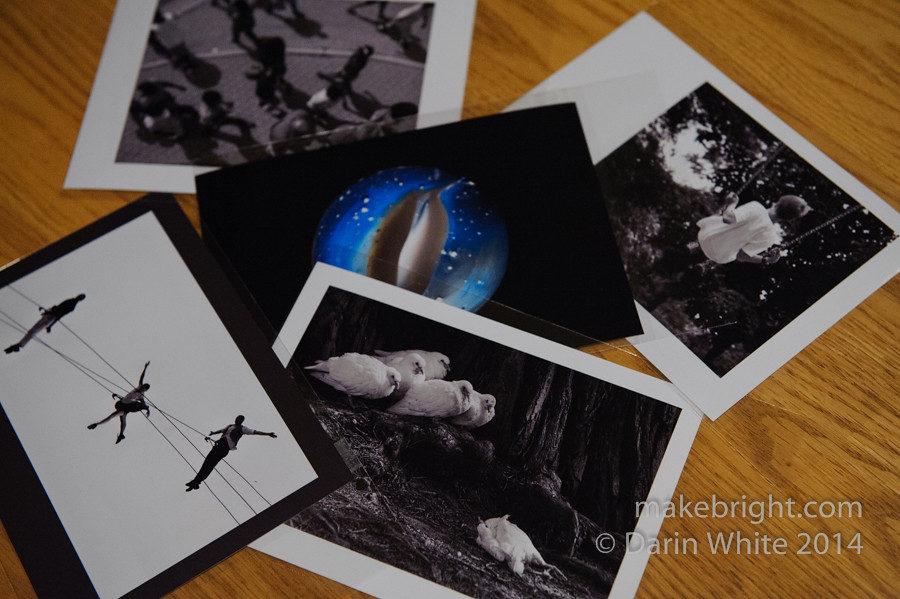 These are actual 5×7 prints of my photos in real life. I’ll be selling them for $5 each. There will be 22 because that’s how many sleeves I got through a kind donation from Leigh-Ann and Dan Liebster. One print of each image. Now you can have a little piece of makebright to stick on your fridge.

Ok, get down to this show, participate in the zine if you like, buy stuff, or just say hello. I’ll see you later in the evening at 7pm Tri-City Stopgap popup closing party. Tell 4 friends.

It should always be this way.

This entry was posted in Uncategorized. Bookmark the permalink.