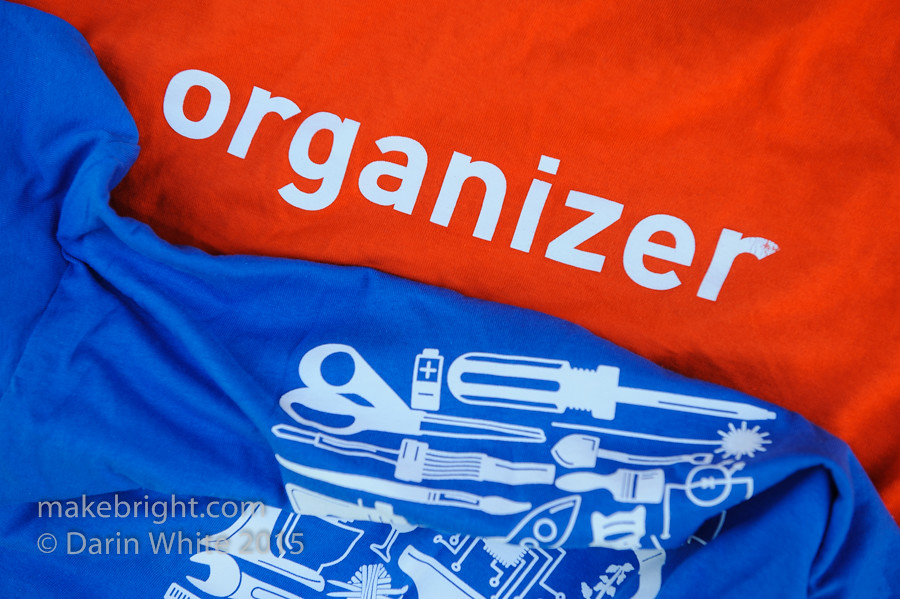 Few times in my life have I been prouder than I was of the Maker Expo event that our team delivered to Waterloo Region on Saturday. We connected you with 100+ makers across a diverse range of disciplines who absolutely love to share what they make. You brought us 7500 visitors who were super-keen to roll up their sleeves and make with us. An outstanding success for a brand new event.

The saying goes that “nothing is free” and that’s true of the Expo. While we didn’t charge admission, there were a lot of expenses to cover like t-shirts for volunteers and crowd barriers to protect you from fighting robots. We also wanted to support some larger maker projects like the geodesic yarn dome and the collaborative painting. Our sponsors generously stepped up to cover those costs and we are deeply grateful to them.

What goes unpaid is the volunteer time put into Maker Expo (hence “volunteer”). I’m a one-man business at makebright. I made a decision to push Pause on the 150% effort a startup business requires in order to put almost all of my horsepower into the Expo. For me personally that means over the course of 22 weeks I invested about 900 hours in Maker Expo work. That’s a full-time job. With no revenue. Nobody asked me to contribute that much, but I so believed in the project that I went all in. Whether that was wise or not remains to be seen. It is a test of my core belief that if I take care of the community, then the community will help me take care of my business.

I’m going to elaborate a bit more here about my role in making Maker Expo, but here’s the gist of it: I’m a storyteller. My toolbox includes photography, videography, writing, a ton of curiosity, a background in art and 20 years in tech and the maker movement. Most importantly it includes years of social investments I’ve made and a pretty substantial network of people with whom I have connected. Please consider hiring me to help you tell your story. It can all start with a chat over coffee. Reach me here dw@makebright.com

Click through for some Maker Expo behind the scenes… 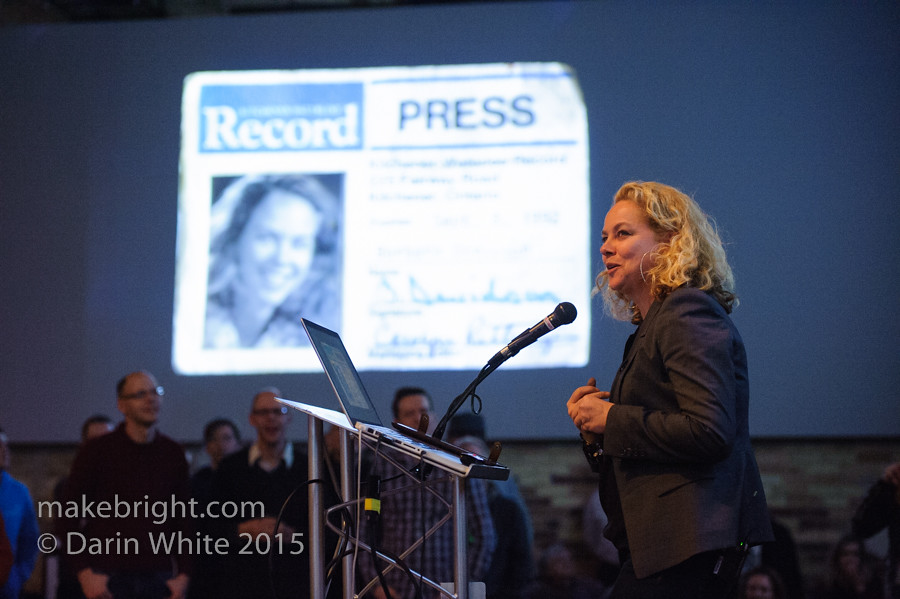 Back in January I was part of a different team of volunteers who delivered the inaugural FLASH Photography event to Waterloo Region. That brought Pulitzer-prize winning photojournalist Barbara Davidson to town and got the work of 100 photogs up in front of the crowd. Of course that show was months in the planning, and in that I did what I do best: told the story. We got a crowd of 300 jammed into the Tannery Event Centre with a waiting list of 100. Big win.

In my February recovery from that event, I heard about some planning just kicking off around a maker gathering. My good friend Ben Brown was heading that effort, so I signed on to help make another new event for Waterloo Region. Eventually we would call it Maker Expo.

Maker Expo, like most good things required a total team effort. I’m not going to cover that aspect here because I want to focus on what I brought to the effort. I will say this is a great team that knitted together a broad range of skills and abilities to git ‘er done. 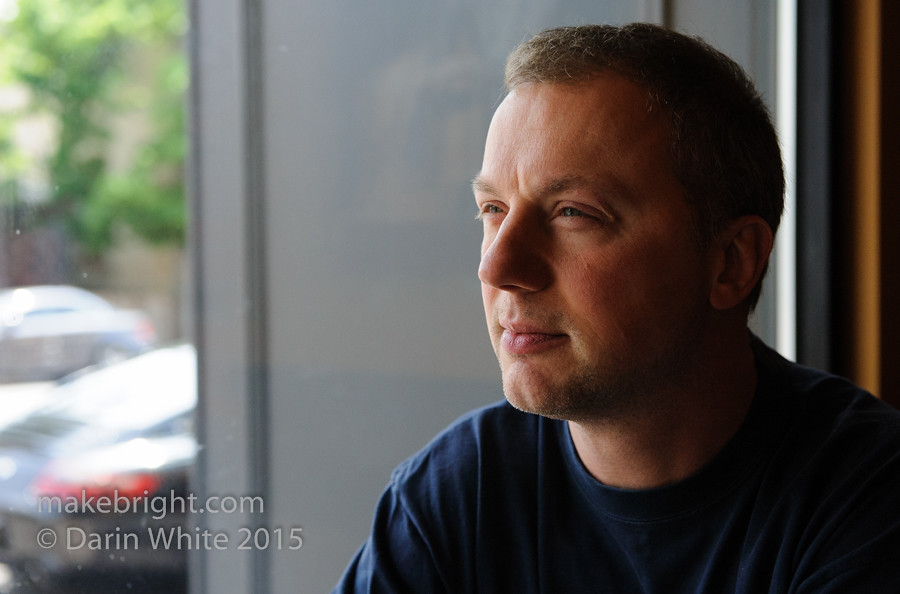 Nothing happens in a vacuum. It seems like a lot longer than 4 months ago that I wrote my first blog post for Maker Expo. My friend Karl Kessler (above) runs Doors Open Waterloo Region with Jane Snyder, and Maker Expo was going to be on the same day as his event. I ran that by him over coffee and he said “Great, let’s cross-promote!”

With that story, I started figuring out how best to introduce this new event to the Region, while at the same time spreading the word on various efforts within the community. It had to be win-win. I did cross-promotion stories on:

* Marie LeBlanc Flanagan of Weird Canada over a coffee.

* Our planning team in the City of Kitchener’s Ideas of the Brave session, aimed at gathering input to inform their 4-year economic development strategy.

I went on to talk to and write about Cathy Brothers of Capacity Canada, Ian Newton of all things cool in cutting edge music, CJ Allen from The Shot, Salah Masad from UW Engineering, Duncan Finnigan of 12 Angry Filmmakers, and more. For the community to believe in the effort, they needed to see the connection points between this new thing and familiar people and places. 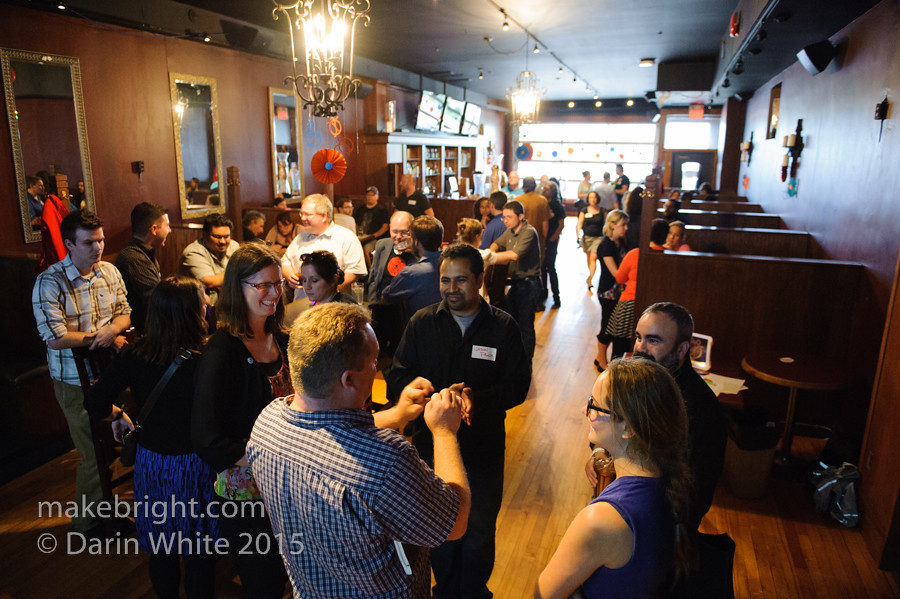 I totally believe you need to show your meta-making as you go along in life. That is to say, for the community to believe in us, they needed to be able to follow along a bit with the creation of Maker Expo. So I started telling the story of our organizing team with our kickoff party at Cork Hall (above). To really communicate in an authentic way, you need to tell a lot of small stories. Vignettes. And you string ‘em together. Even not-so-glamorous pics of our weekly meetings gave the community a window into what we were doing.

It was critical to humanize the whole effort. That’s why every one of the dozen talks I gave about Maker Expo started with a slide of the organizing team and my observation that every good thing you see in the community exists because *people* did it.  It doesn’t just happen.

Closer to the event, I did a video of our Expo boss Ben Brown sharing his thoughts on the event and inviting the Region to join us. Regular readers know I set out in 2015 to stamp out anything anonymous. If we want the community to care about anything, they need to know the *people*. 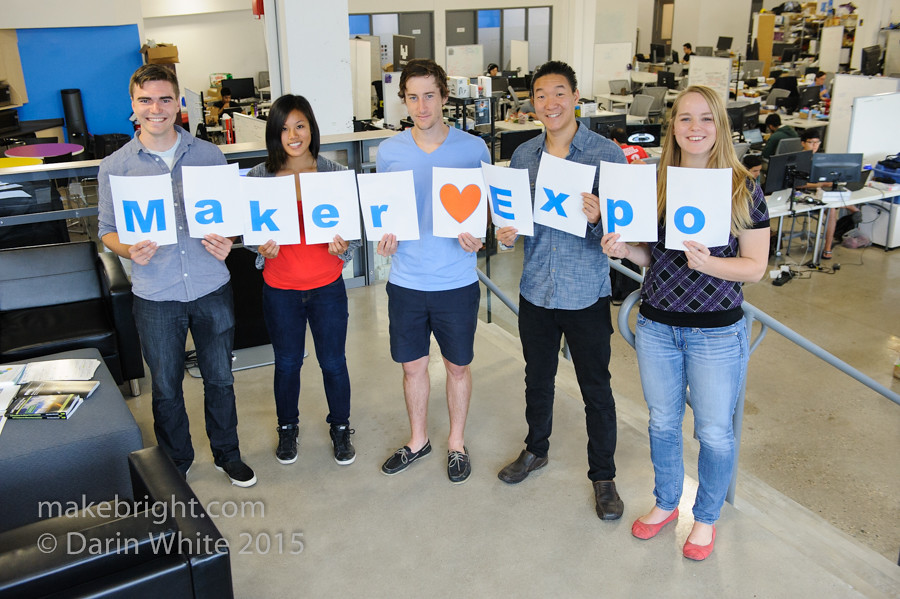 It’s one thing to get attendees to come out to your event. That can be a challenge itself. It’s slightly harder to recruit volunteers. And a couple of difficulty levels up from there is getting makers to invest a lot of their time to join the event as exhibitors. Topping the charts of do-the-hard-thing is finding sponsors. In addition to media strategy/execution responsibilities, I took that job along with my co-organizer Ravi Baboolal. In mapping out our sponsorship tiers, I offered to profile our tier-2 sponsors on the Maker Expo blog.

That led to profiles of UW’s Velocity incubator, Laurier’s 2nd year students in a Schlegel Centre for Entrepreneurship course, and Conestoga College’s IEEE chapter in their makerspace.

Video profile on one of our sponsors: UW Velocity

Right around this time I started to add basic video in with the stills I was getting at these various shoots. Video can be a very compelling tool and I know enough Adobe Premiere Pro to be dangerous, so I started figuring out a lot about video and how best to use it. I have a very lo-fi setup, but I capture decent audio. Most importantly, I’m good at getting my subject to relax. With still photography, I just need the subject relaxed for 1/320th of a second. With video, you need to keep things relaxed for 20 minutes or more. Great experience. 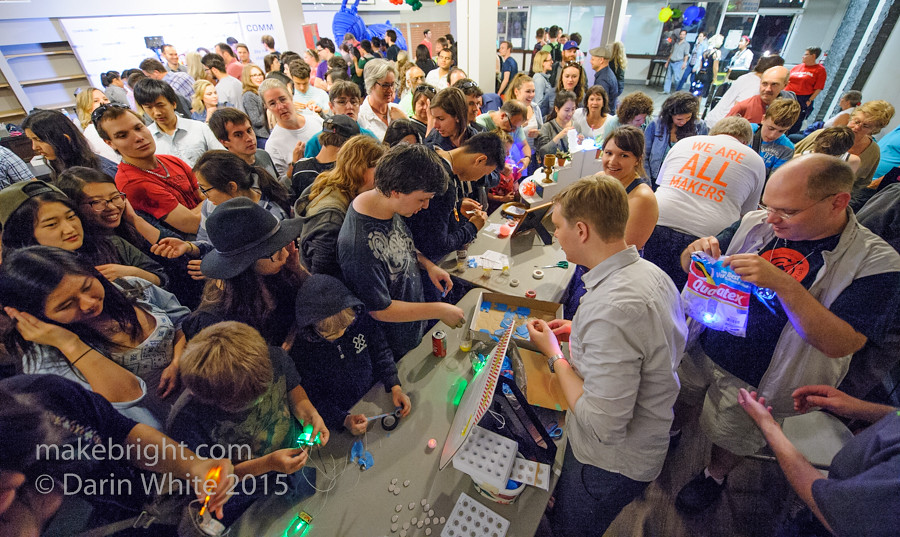 Taking the Expo to the Streets

I approached my role with Maker Expo in phases with each one featuring a top priority. First we needed exhibiting makers, so that was the focus up until our Canada Day application deadline. Then the next phase was a push for 100 volunteers.

It’s only marginally effective to put out a call on social media: “Join our thing!” Far more effective and far more labour intensive was to get our feet on the street. We did a very exhausting but productive promo pop-up blitz at: Communitech, Summer Lights Festival, Cambridge Arts Festival, Nerd Nite KW, Tech Jam job fair, and Eden Park Fest. Those were just the ones I was at. Other team members hit Hamilton Mini Maker Faire, Discovery Square, KW Knitters Guild Festival, and more. There was really no substitute for connecting with people face to face. 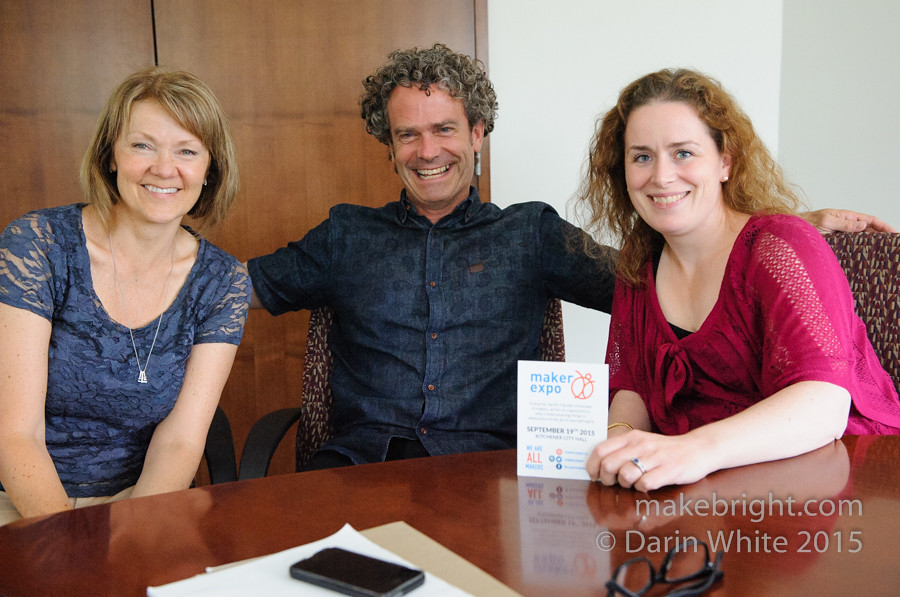 Laura Allan, Stephen Preece and Victoria Larke of Laurier’s Schlegel Centre for Entrepreneurship, one of our sponsors

My goal with our primary sponsors was to figure out how to connect beyond the funding. For Velocity, we were fortunate to have four of their companies join us at the Expo. With Laurier, we were delighted to help connect entrepreneurship curriculum with the Expo. Cam Turner and I worked with Laura Allan, Stephen Preece and Victoria Larke (above) to hook 120 second-year business students to makers at the Expo. Instead of a final exam, these students will be working with the makers to analyze their business. So good! 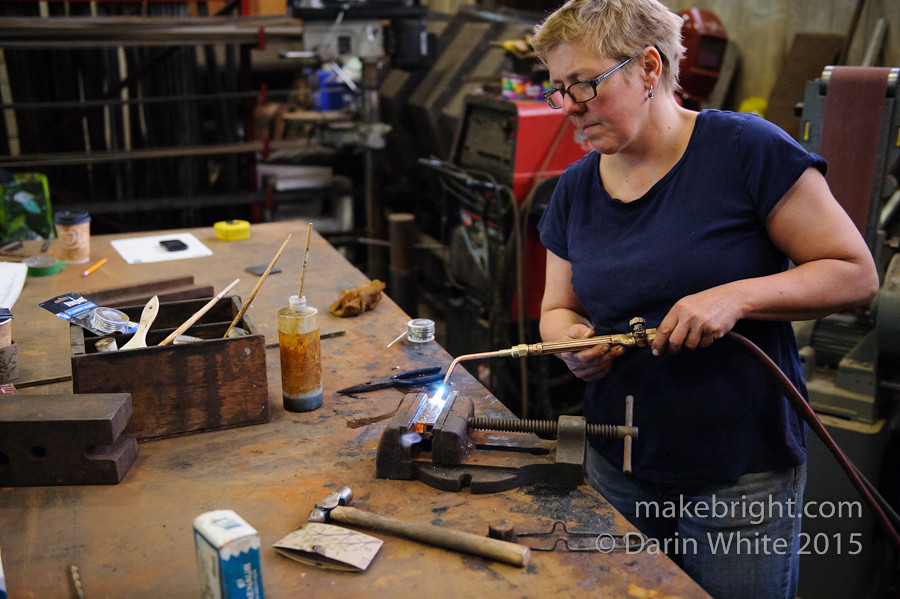 It’s All About The People

Our region is full of tech and art and all the things that are produced by those collective engines. But I firmly believe that the key to our prosperity lies all within the people. To that end, I featured makers like Sandra Dunn, Maria Santamaria, Pat White (my mom), Chris Parent, Brent Wettlaufer, the Little Libraries of KW crew, and Allan Caine. This is how the community connects: not by seeing the work, but by seeing the person who loves to do the work.

It was also important to me to feature our volunteers who are critical to the show. That was challenging to do leading up to the show as the volunteer orientation sessions were the week before the show. I got it done. I also pitched a “high-five a volunteer” idea to the community to recognize their work. I gave out a lot of high-fives at the Expo.

I believe it is the case that people in the community feel a lot of social (or sofa) inertia. They mostly stick with what is familiar. To lower that threshold, I featured the venue, so people would feel they know where they would be landing at Maker Expo.

Life is short, gotta have fun. So I tackled strategic goals with a fun approach like pre-event video and photo shoots with the three mayors warming up for their robot battle at the Expo, a beat-construction-fatigue video with Sam, an interview on community events with Eric Rumble, and a connection with Geek Week to cross promote.

All of this was stitched together with what we’ll call lighter weight social media hits. You’ve gotta keep the media heart beating to rise above the noise. Fortunately I had a lot of help with this one. 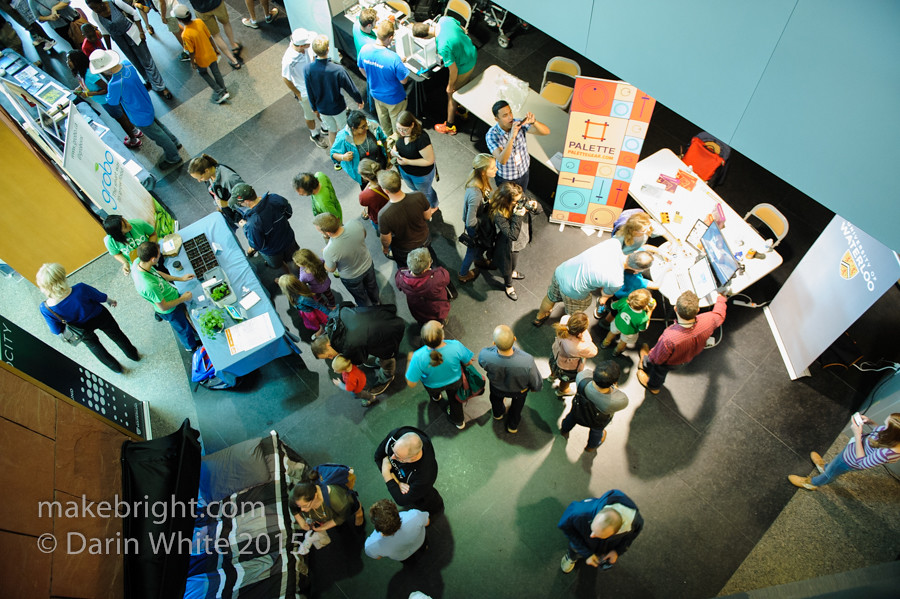 Maker Expo 2015 and the makers

The work doesn’t completely stop after the event. I’m now collecting media, surveying, and gathering quotes. We’ve got a debrief coming next week where we’ll discuss the Expo and what we want to start/stop/improve with it. Have your say with this 5-minute survey.

Let’s Get To Work

I’m a big believer in volunteerism, and I’m also a serious practitioner of it. What I need is to derive enough paid work to buy groceries and put two kids through university and keep doing things like Maker Expo and makebright. I am open to all ideas and y’all know I love to chat over coffee. Please consider hiring me, connecting me with paying work, or offering your ideas. Reach me at dw@makebright.com.

I’m completely invested in this community. This is Waterloo Region.

This entry was posted in shameless self-promotion and tagged business, community. Bookmark the permalink.