For those not following along, I’m helping revive some long-unused CNC machine tools at our awesome local high school, Sir John A. MacDonald in Waterloo, Ontario Canada…

After a lot of reverse-engineering of the CNC control box at home and some substantial design/soldering/troubleshooting/bench testing, I got back into the school today with tech teacher Dean Henderson to try my adapter electronics on the actual mill and lathe. Here’s a test run video of the new and super-easy web-based CAD/CAM/cut tool from Easel.com. The goal here is to turn students on to the power of rapid prototyping, so simple tools and fast workflow is key. You do up your design in Easel and generate your toolpath and just hit “Carve”. That sends a stream of motion commands (g-code) down the USB serial port to an Arduino I’ve configured with the open motion control tool GRBL (which drives a lot of 3D printers and mills in the world). GRBL buffers those commands, does some rudimentary optimization, and feeds out step/direction signals to the motor drivers. 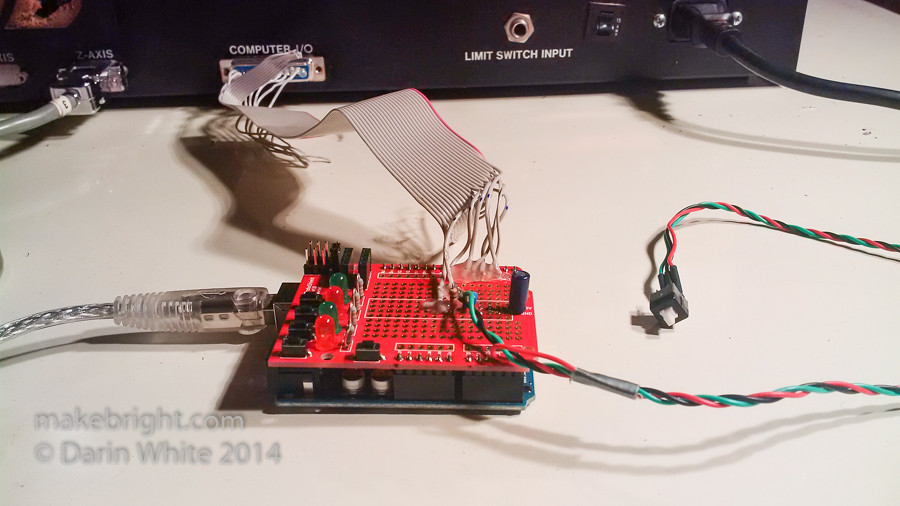 In many applications, the motor drivers are built right on to the Arduino in the form of an add-on shield. In our case at SJAM, we already have perfectly good motor drivers in the TORCAM control box I reversed engineered. So I interfaced the Arduino with the 25-pin Dsub connector on the CNC control box. And it works.

Update 2015-07-21: looks like a burst of interest on this post, so here is some of the background work I did to get to this point.

Some details and tweaking still to be done, but I am delighted with how this came together. Now we can make some stuff… in Waterloo.

This entry was posted in maker resource and tagged CNC, waterloo. Bookmark the permalink.