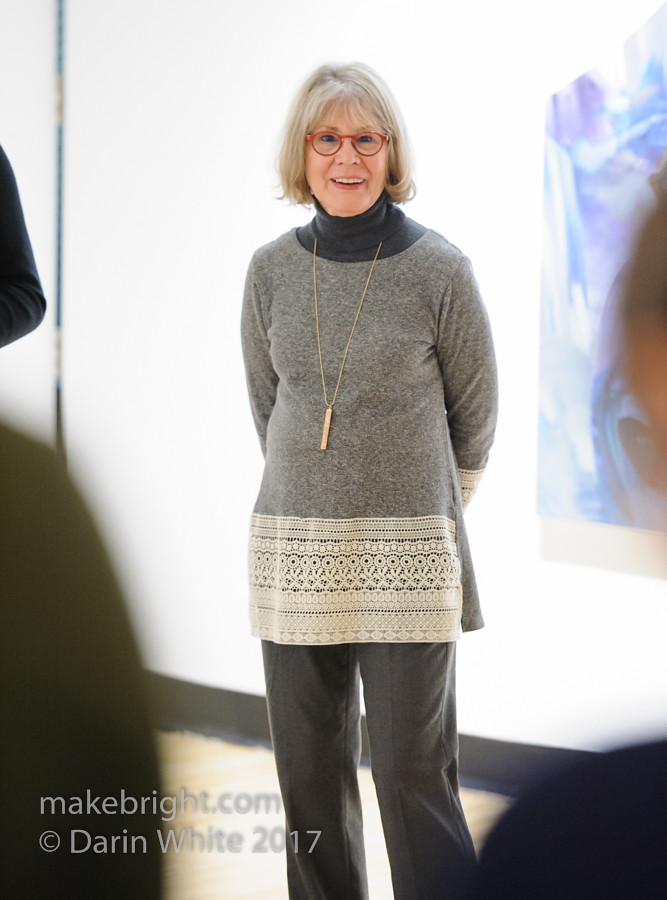 “I still have something to say”, said top-shelf photog/performance artist/professor Suzy Lake on Thursday night at the Art Gallery of Guelph, and she had my rapt attention for her whole talk spanning nearly 50 years of work.

I landed at this talk (along with Brohemus) for two reasons: seeing some of Suzy’s work at the National Gallery of Canada in Ottawa last June made me wicked-curious to know more about her. And secondly, my brother took a photography class with Suzy in his undergrad at the U of G. Just last year, Suzy won the Scotiabank Photography Award which is a big deal. Something that I deeply respect is that she is a long-time meta-maker of the arts, working beyond her practice to increase the capacity of the Canadian art-o-sphere and to share her knowledge through teaching. 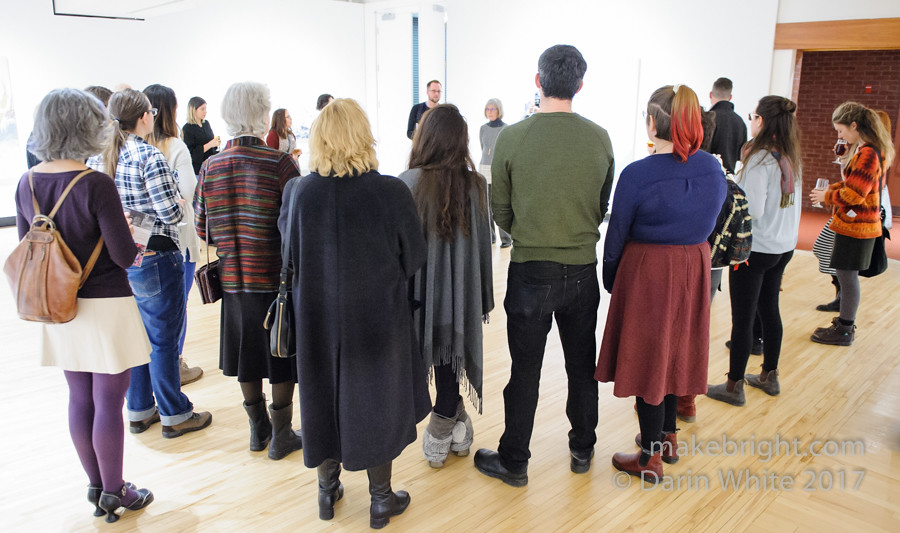 The full scope of Suzy’s work is beyond this small blog post. My first encounter was with her costumed self-portraits, and that’s just the tip of the iceberg. Beginning her fine art studies at Wayne State University in Michigan back in the ‘60’s, she was intrigued by the tools of photography and film, but formal study in those mediums was only possible for Communications majors.  Nevertheless, she adopted them as the “ordinances at hand”. She mashed that up with performance work and constructed installations. She has and continues to have strong concepts that are well-realized and that hit me directly in my makerly breadbasket.

The TL;DR: Suzy Lake is massively talented. If you missed this talk, tune in to the street. Big thanks to Suzy, AGG, CAFKA and Musagetes for makin’ it happen. 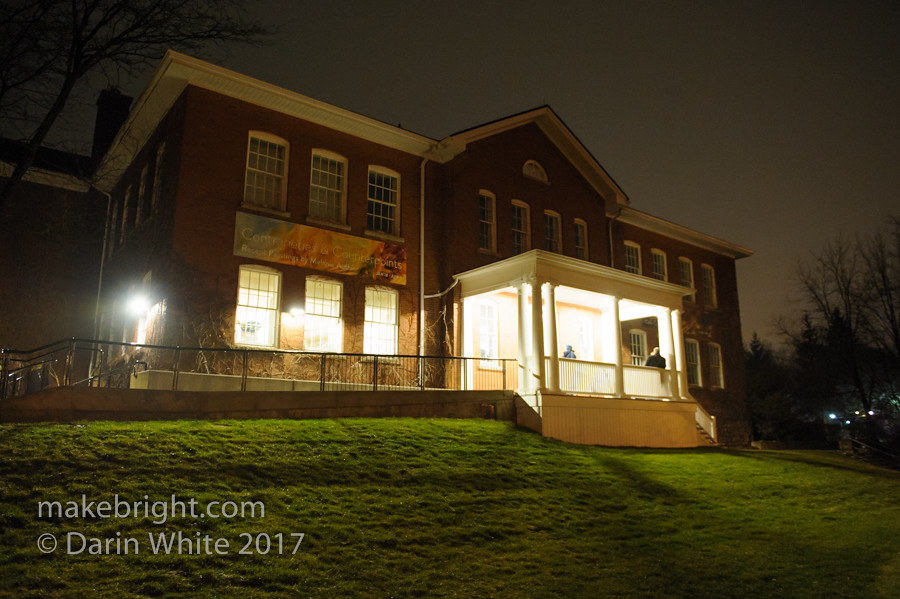 It has been too long since I’ve been back on campus. Back in the ‘80’s, we used to call this building Macdonald Stewart. In 2014 it became the Art Gallery of Guelph. By whatever name it goes, it’s a great space. 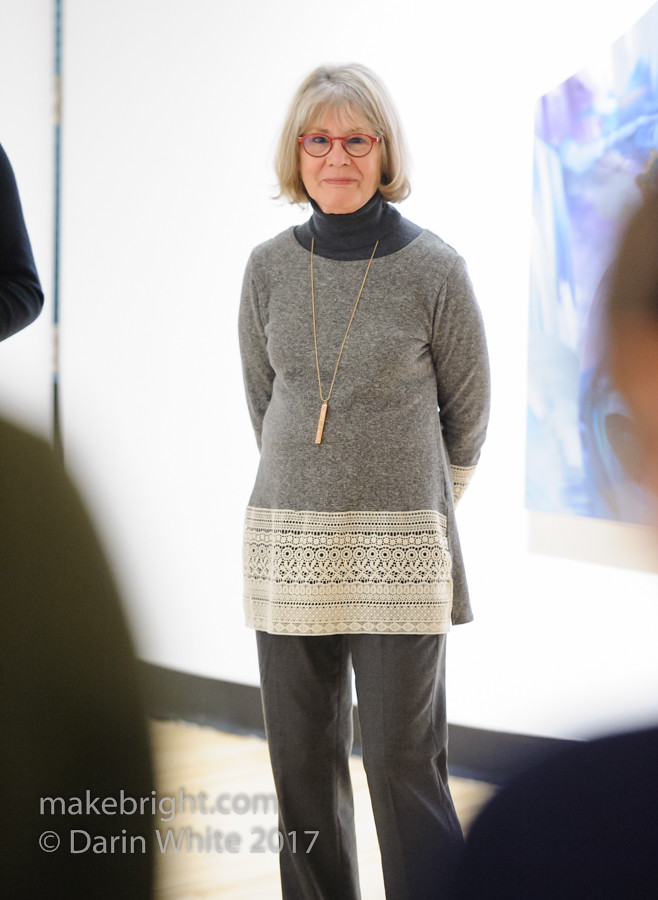 As I tripped the shutter, I was thinking of all the frames Suzy had shot of herself in a wide array of approaches and contexts, and there I was tracing those footprints with my own photos of her. It felt like I had a bit of license to include a few slightly unconventional shots that would normally be weeded out. 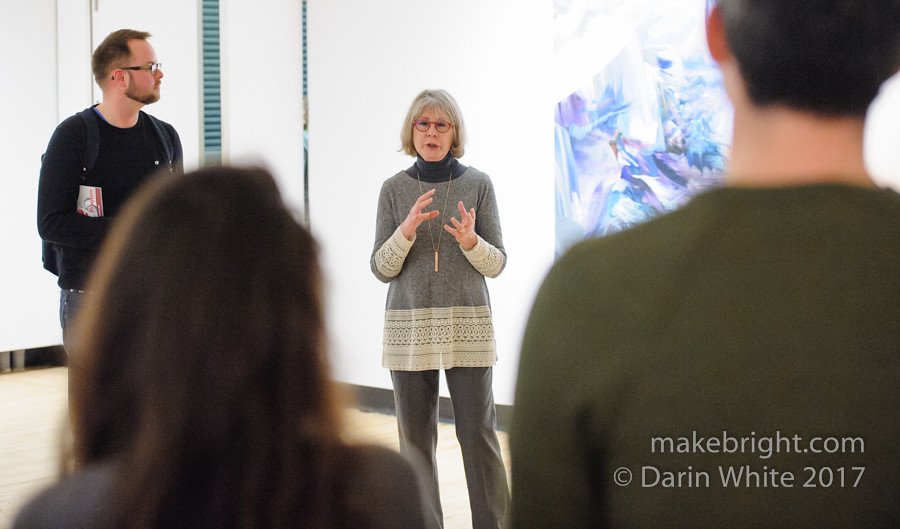 Describing the beginning of her career making art, Suzy noted the in-built constraints of the 60’s: “I was raised to be somebody’s wife and somebody’s mother”. This echoes conversations I’ve had with my Mom who is only a couple years older than Suzy and who told me that she had two choices growing up: “I could be a secretary or a nurse.” Suzy noted that her work was often dismissed through gritted teeth as “women’s work”. She persisted. 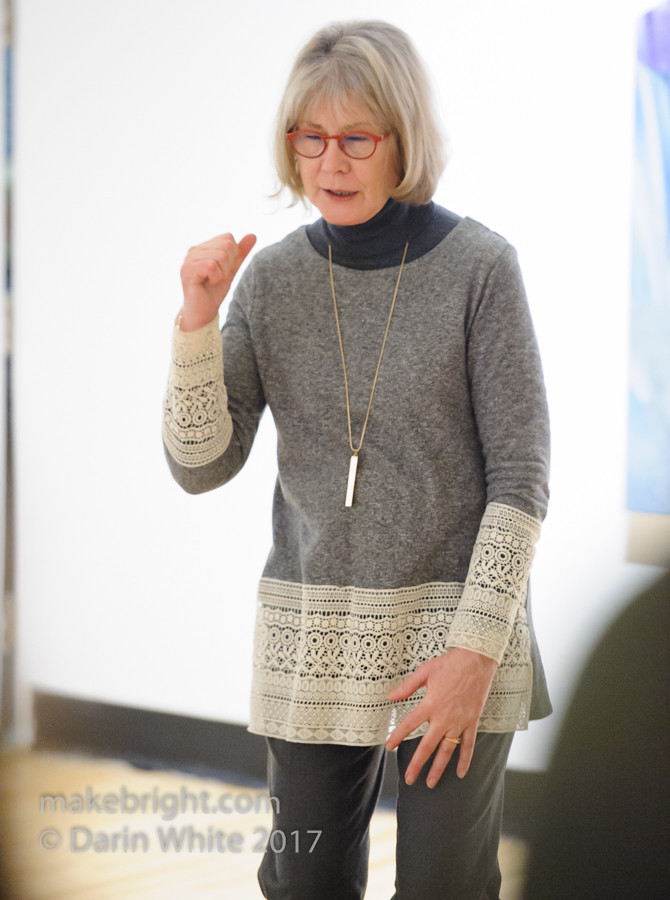 It turns out that you can cover a lot of ground, art-wise, in the course of 50 years. Suzy described her Extended Breathing project in which she took hour-long exposures of herself. Hour. Long! Now *that’s* discipline. Her feet are tack sharp in the images and movement blur is introduced into the exposure through her breathing and swaying. Given the suburban context of some of the images, I thought that was an interesting comment on an artist’s ability to be rooted in the everyday and at the same time create freedom to move and express something. 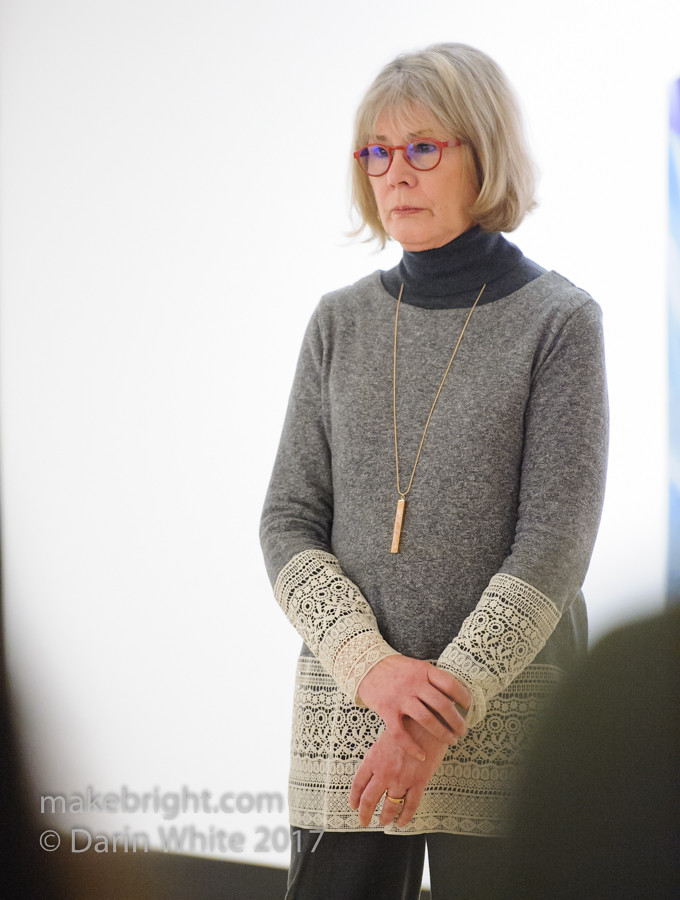 Another project, Choreographed Puppet, Suzy described involved fabrication of a large framework from which she could be suspended in a harness like a marionette. Perched atop the structure were friends who would animate Suzy by pulling the ropes. This made for interesting photographs. 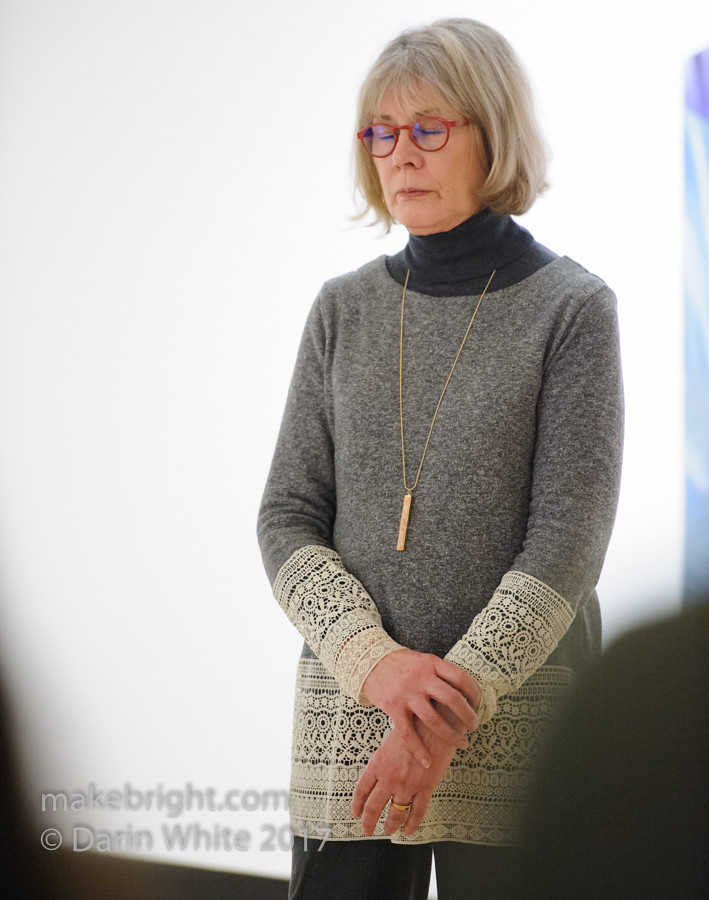 And yet another series, Reduced Performing,  involved Suzy laying in a flatbed scanner large enough to take a full-body scan of herself. Each pass took 12 minutes, which again captured some blur of breathing, which I love. The scans make Suzy look doll-like. 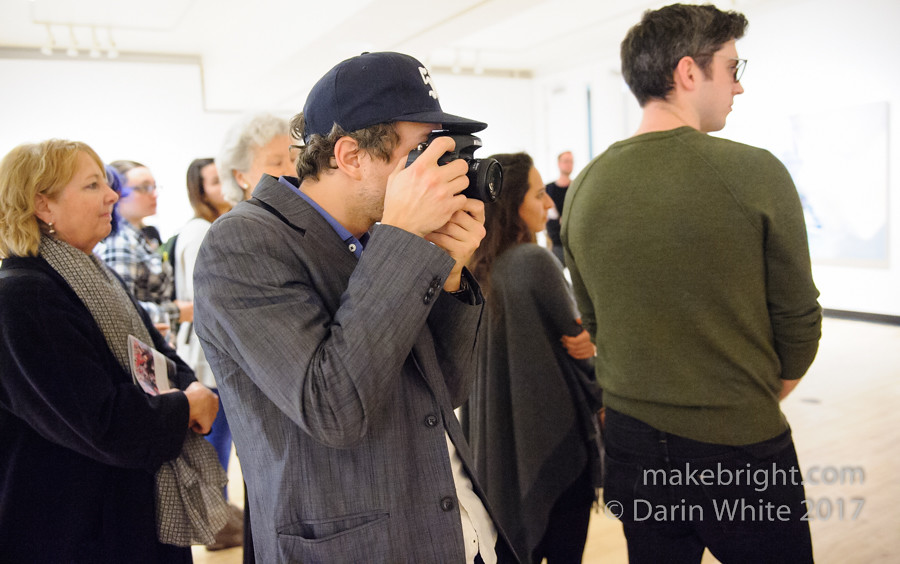 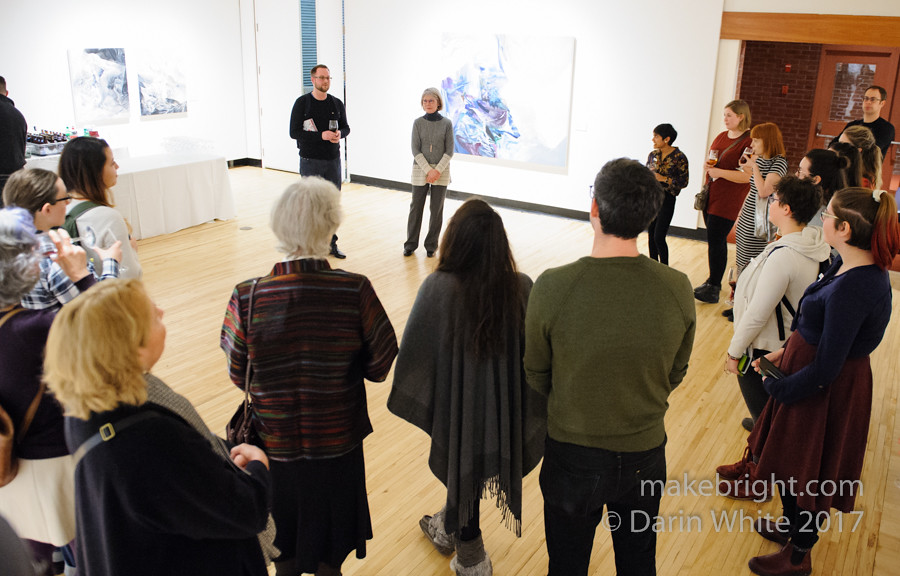 I was quite honestly inspired by the variety of concepts Suzy has explored and the mash-up of photography/film/performance. 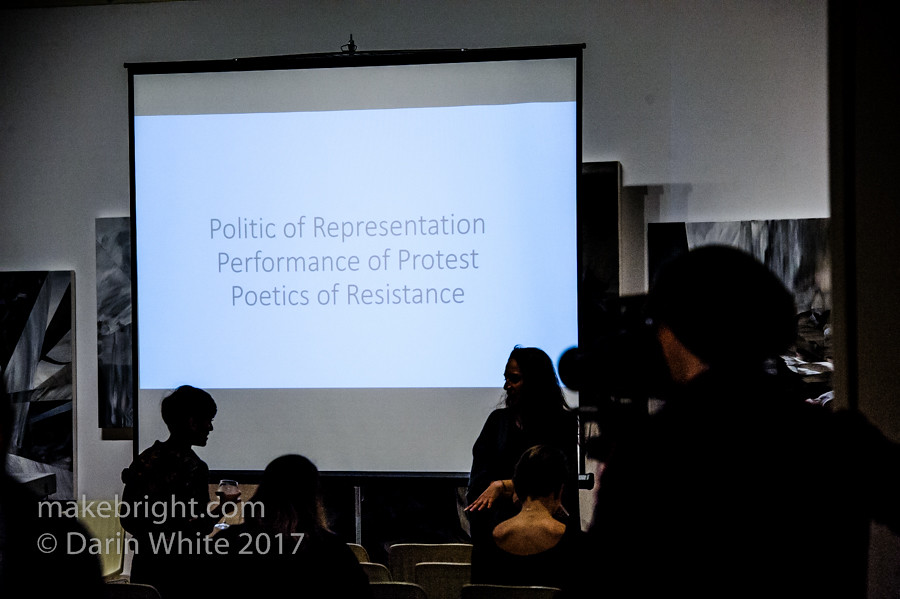 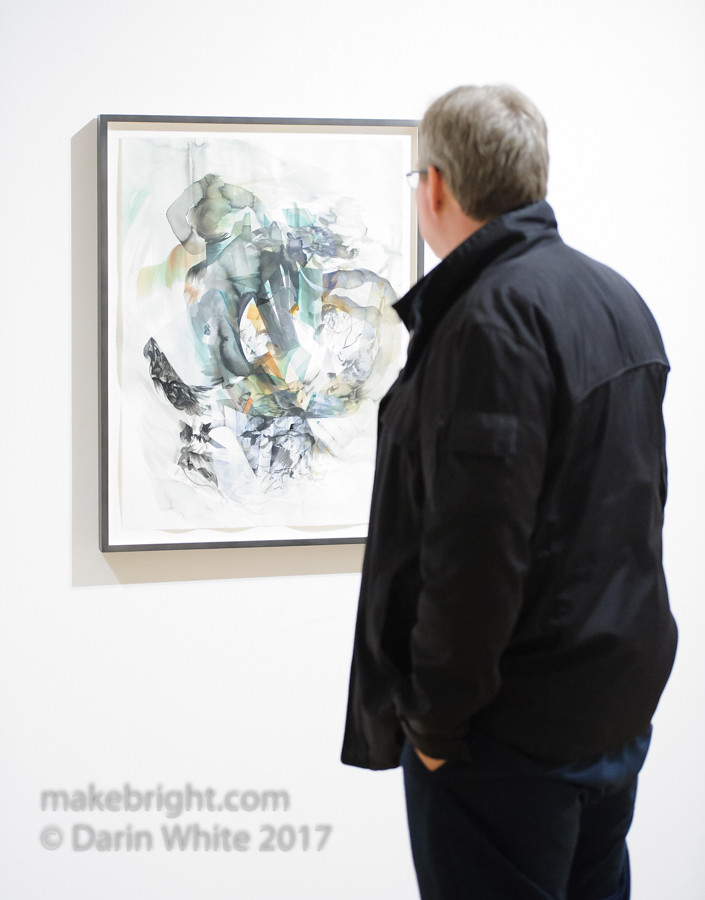 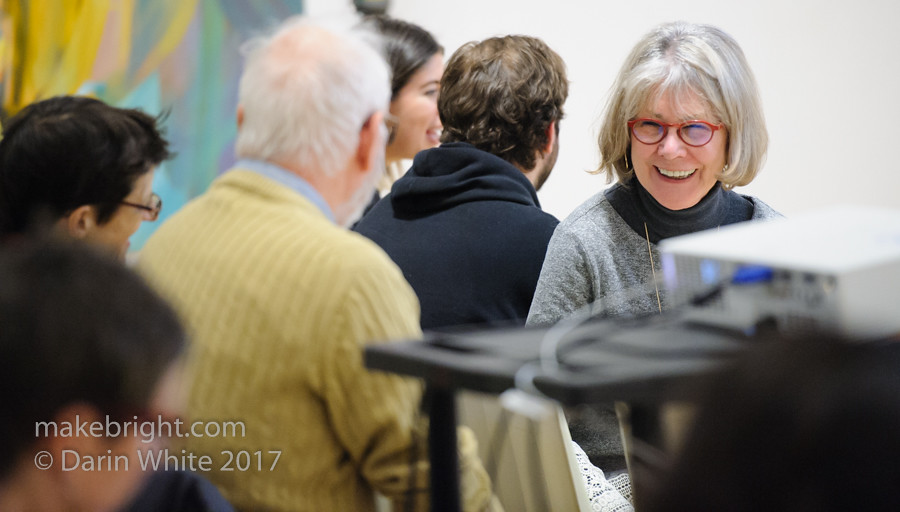 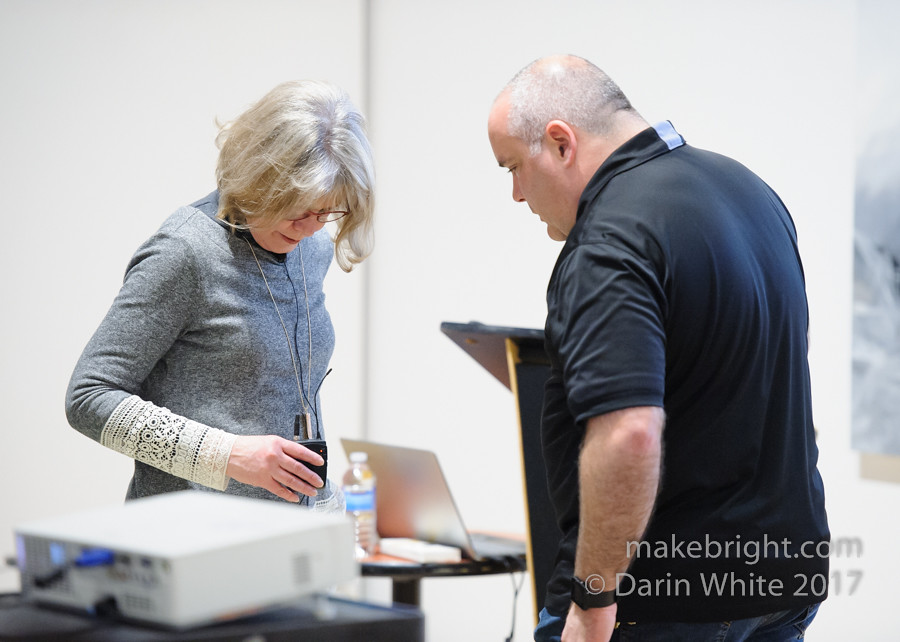 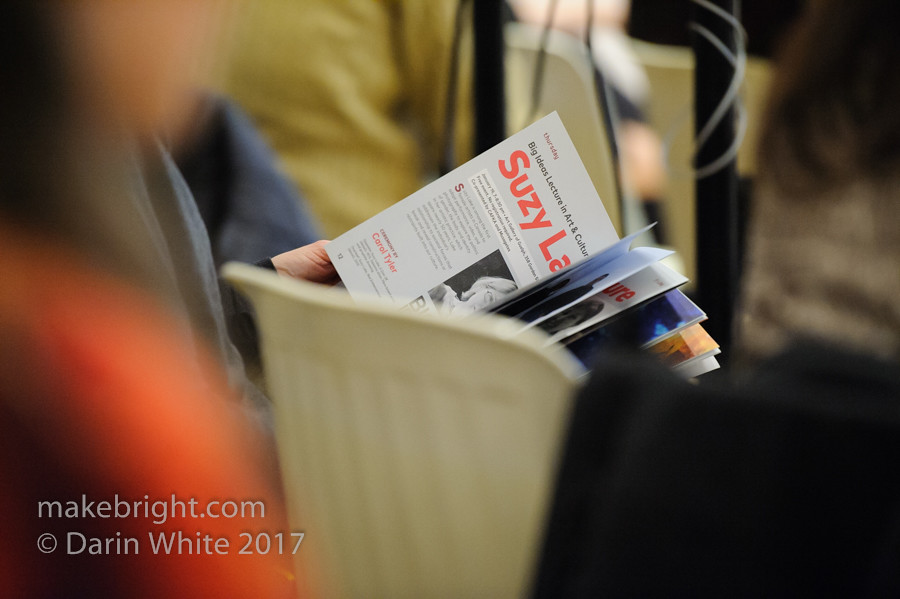 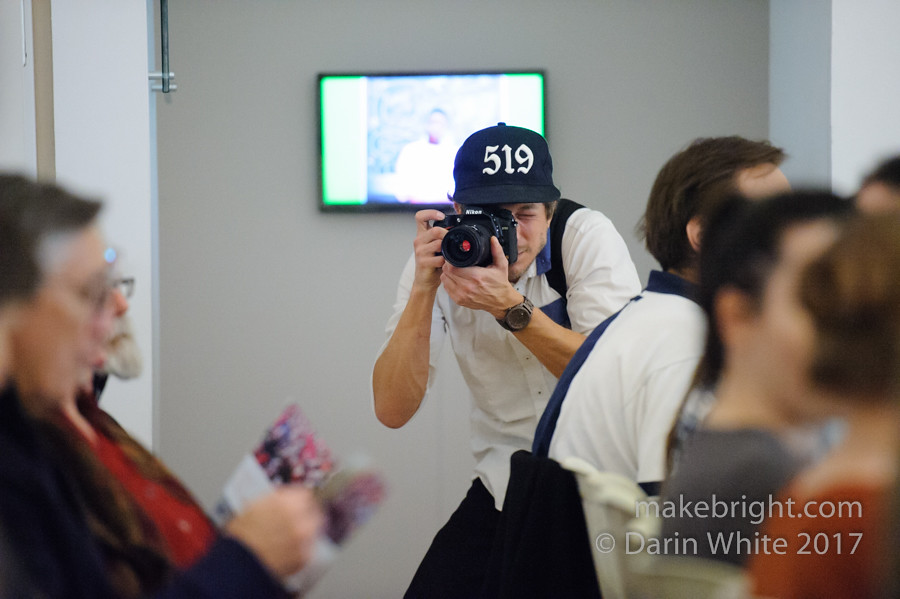 Man, this guy was on the job. 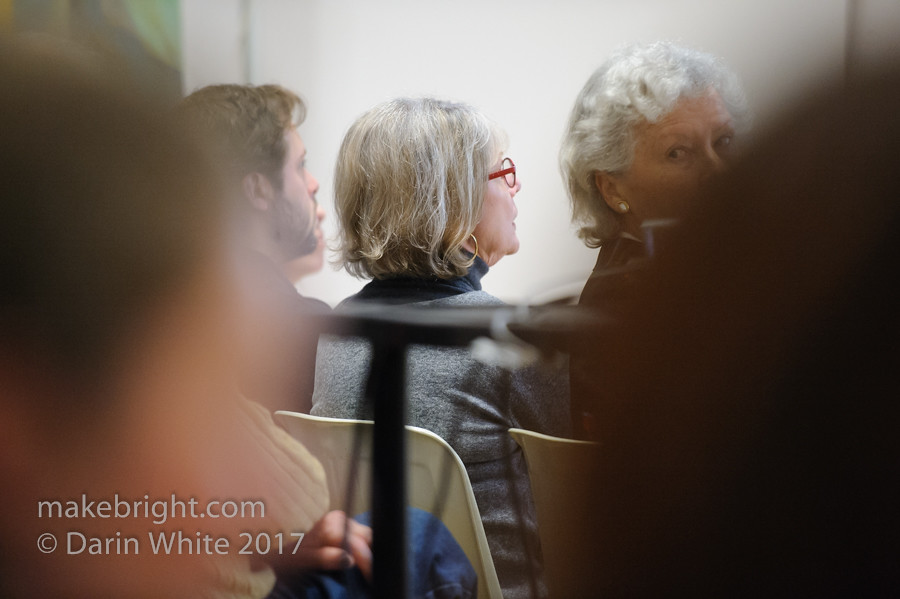 Suzy’s Beauty and the Aging Body series challenges our perceptions of beauty. Particularly delightful is her triptych Beauty at a Proper Distance/In Song which from a distance shows a youthful mouth and up close reveals facial hair, wrinkles and stained teeth. Suzy joked about lecturing to students while concealing her unplucked hair with one hand permanently gripping her chin. She noted that within the art world she is, to some degree, in competition with the youthful 20-something students filling the room. I thought a lot about that. 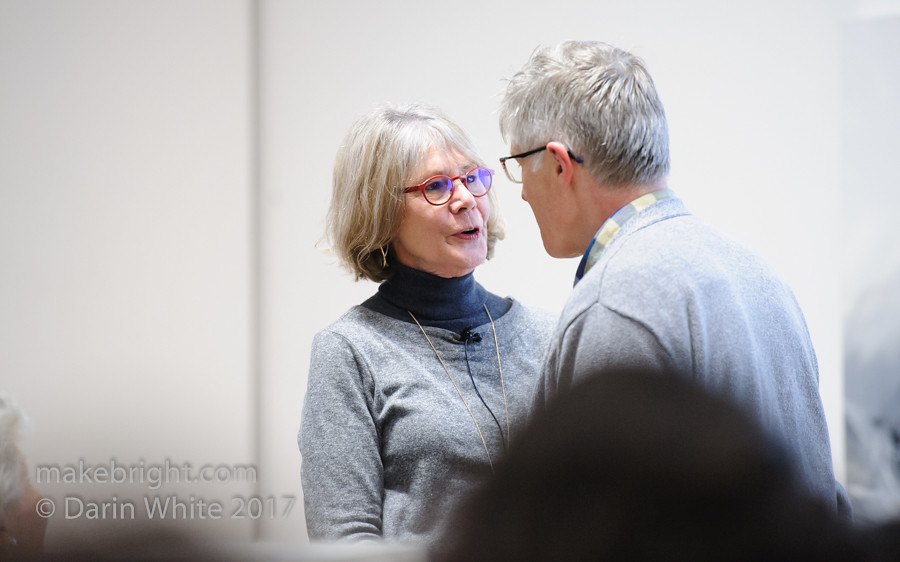 People look a certain delightful way when chatting with friends. 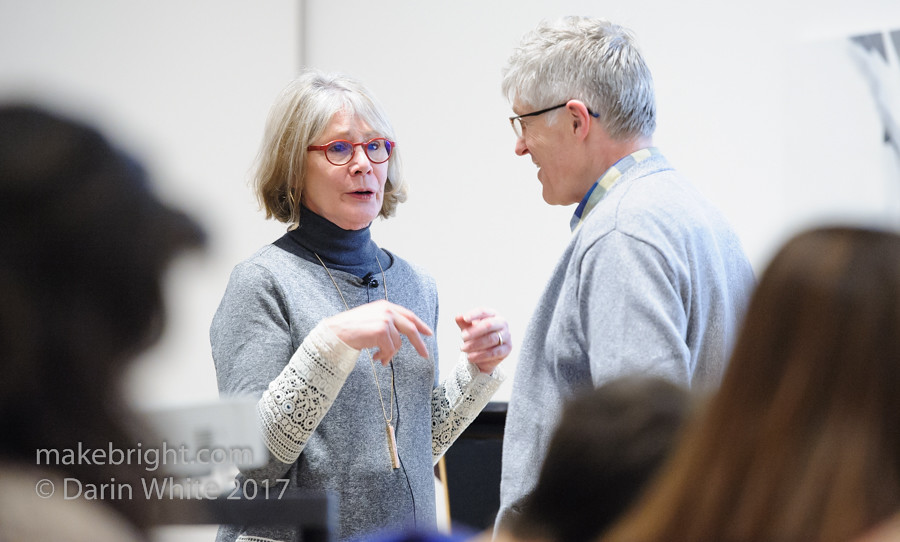 They are quite themselves. 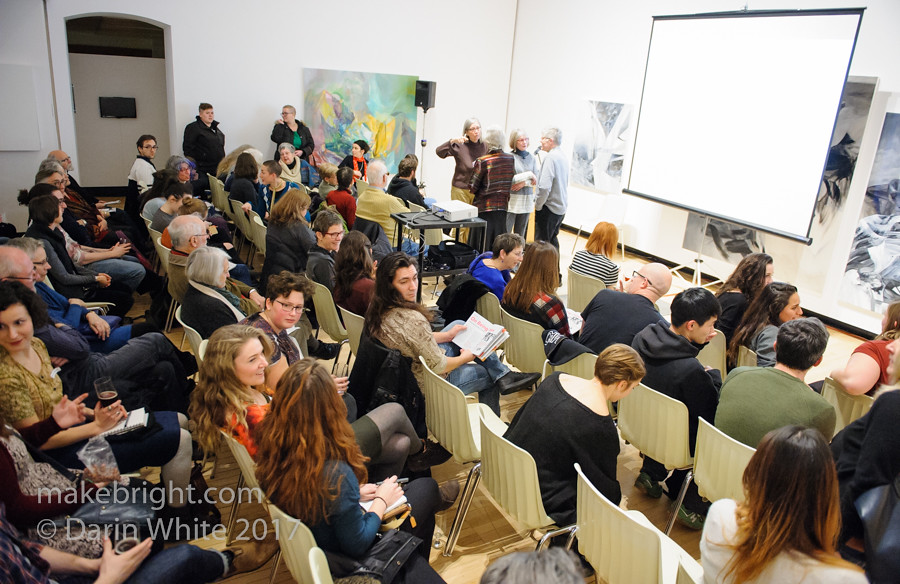 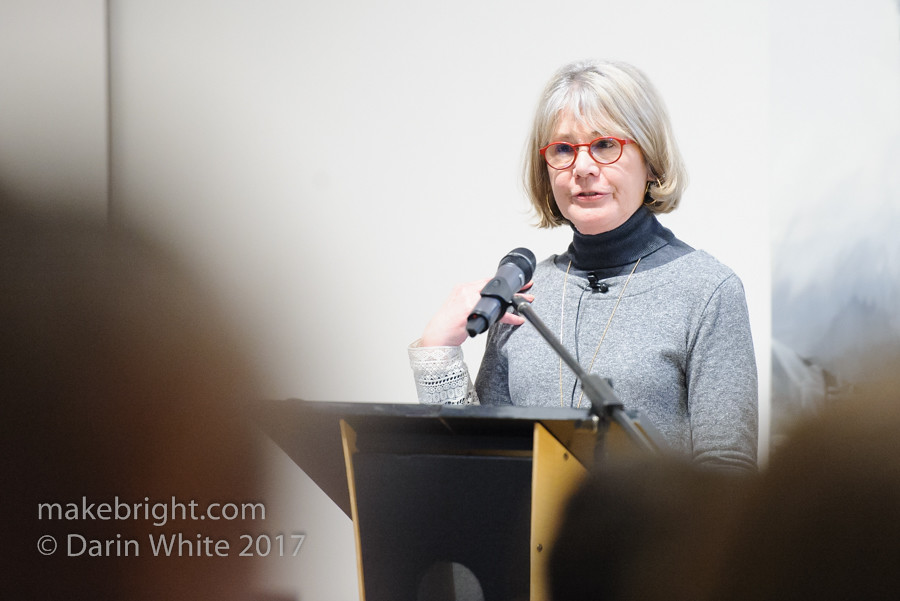 As I understand it, the Scotiabank Photography Award comes with a solo exhibition at the Ryerson Image Centre this year during CONTACT. That show runs April 28-Aug 13, 2017. If you haven’t been to the RIC, well now you’ve got two reasons to go. 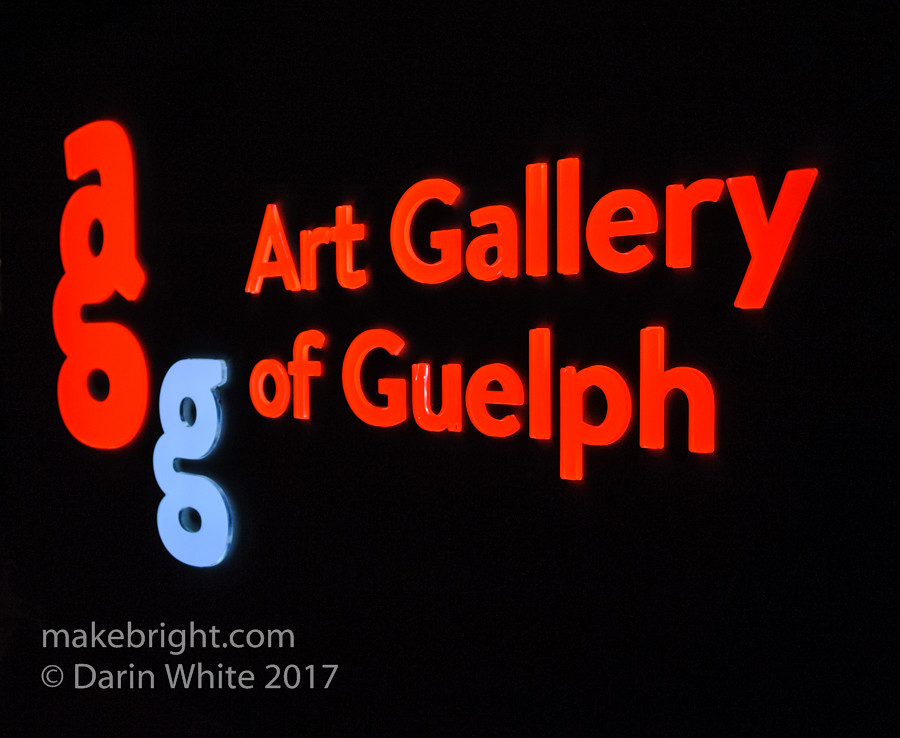 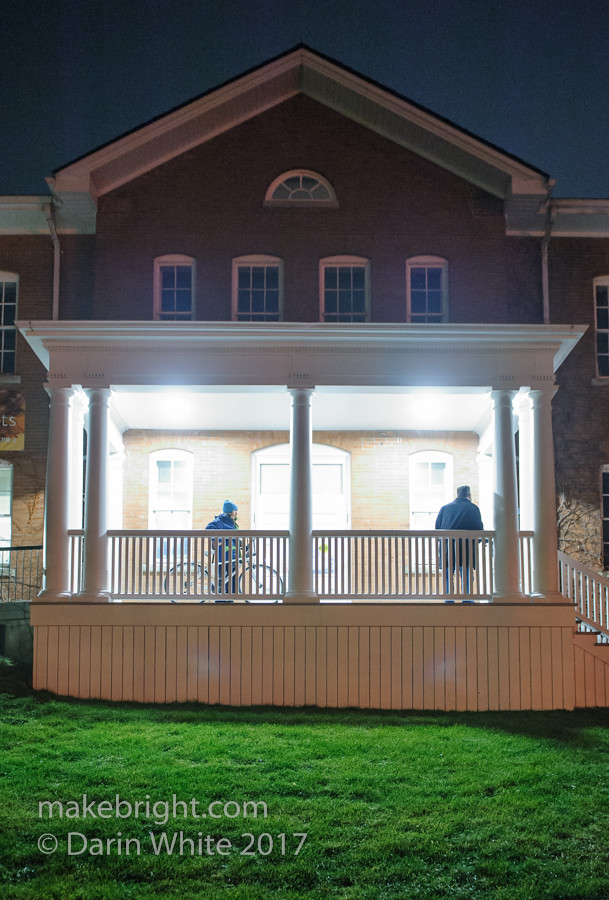 out into the mercifully mild night we went.

In Guelph, this is us.

This entry was posted in event and tagged Guelph, photographer. Bookmark the permalink.