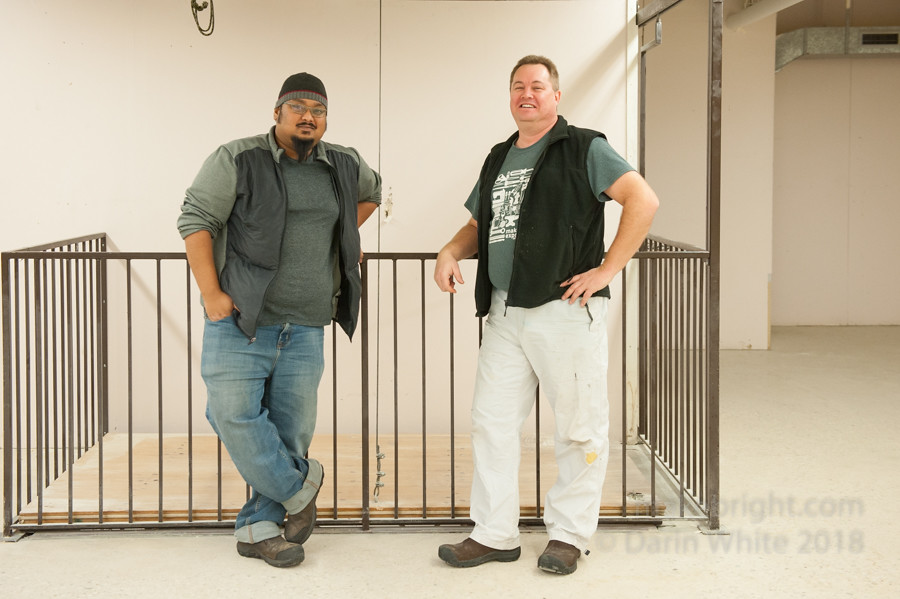 After a good number of years at the corner of Charles and Kent, Waterloo Region’s original makerspace, kwartzlab, is on the move to new digs just around the corner at 145 Bedford.

Hard working meta-maker and move organizer, Cam Turner (right) invited me for a look at the new space last week. Happily, my good friend and kwartzlab President, Ravi Baboolal was there, too. While I’ve only got two people in frame for this photo, there are many more kwartzlabbers who have worked hard to get here, including the three women and three other men on the board of directors. A big team effort.

The TL;DR: kwartzlab is a fantastic bunch of people who support hands-on making in the community. They’ve been doing this since 2009, so in makerspace-years they must be something like 63. The group is massively expanding their space in response to member requests for personal studio space and from experience running concurrent activities with different crowds. Moving only four blocks, they’re still in the heart of Kitchener, steps away from a GRT Express Bus stop and a 10 minute walk from the ION stop at Charles and Borden. They just launched a refresh of their web site that describes how to join and what they’re all about. Be sure to follow along on this next leg of their evolution on Twitter, Facebook and Instagram. The group is in serious move-mode now, packing up tools for the move, so be sure to hit one of their Tuesday Open Nights 7-10pm in the new year and don’t miss the big opening (tbd). Big congratulations, my friends. 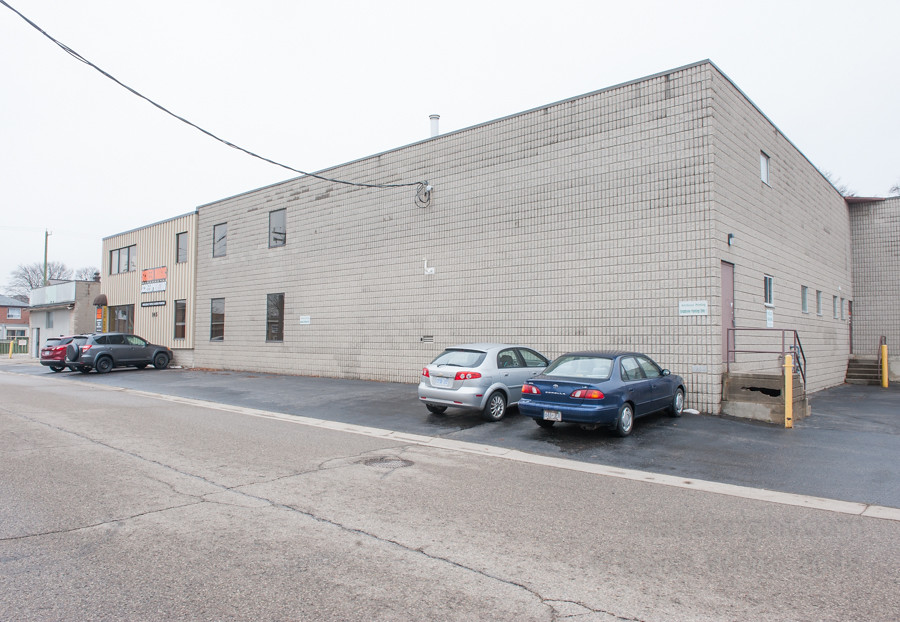 The left end of the building here is almost Ottawa Street, near Courtland. 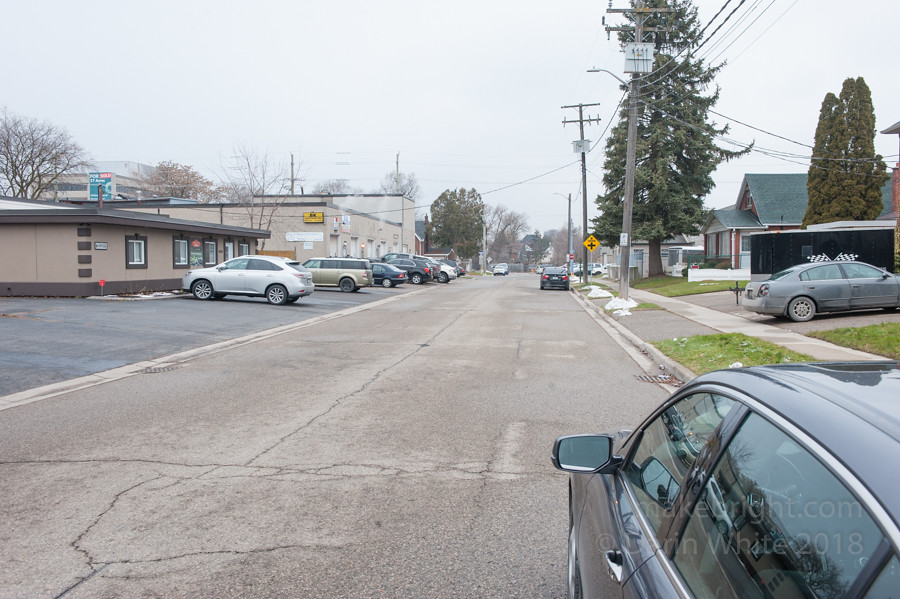 Looking up Bedford, there’s Borden at the other stop sign. Click through for a modest (seriously) number of pics… 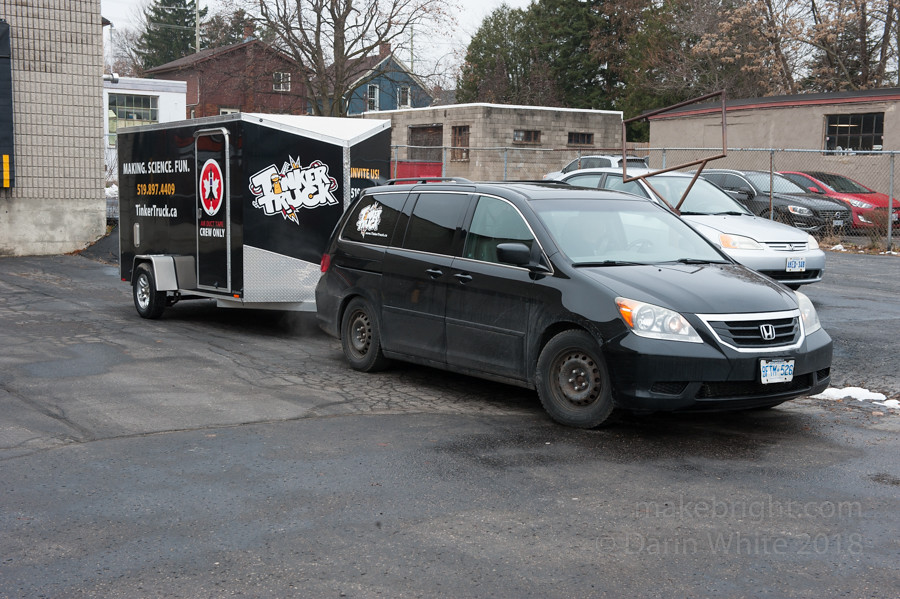 Cam runs Tinker Truck, your mobile makerspace for hire. On this day the tinker truck was hauling new sofas for the lab. 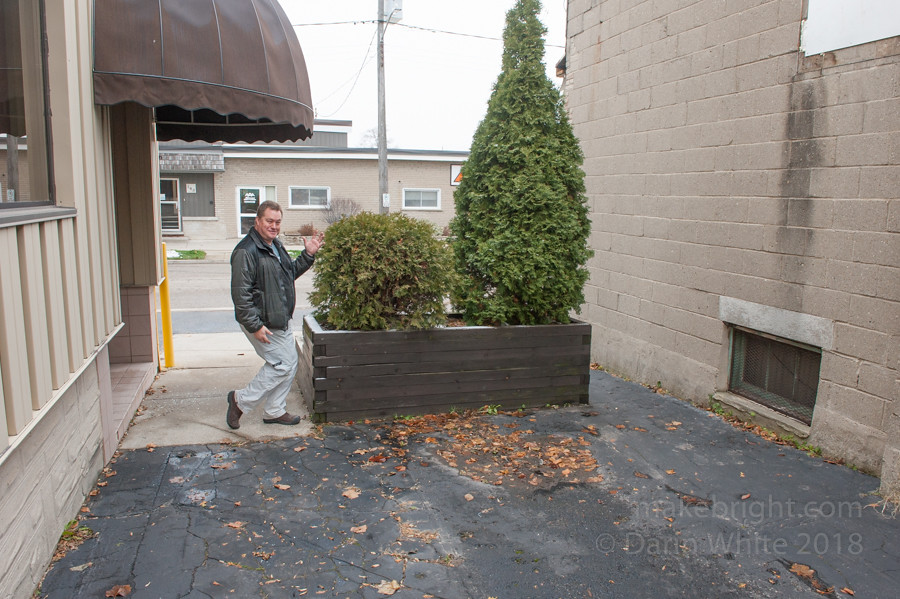 Plans for some great bike parking here at the front door. 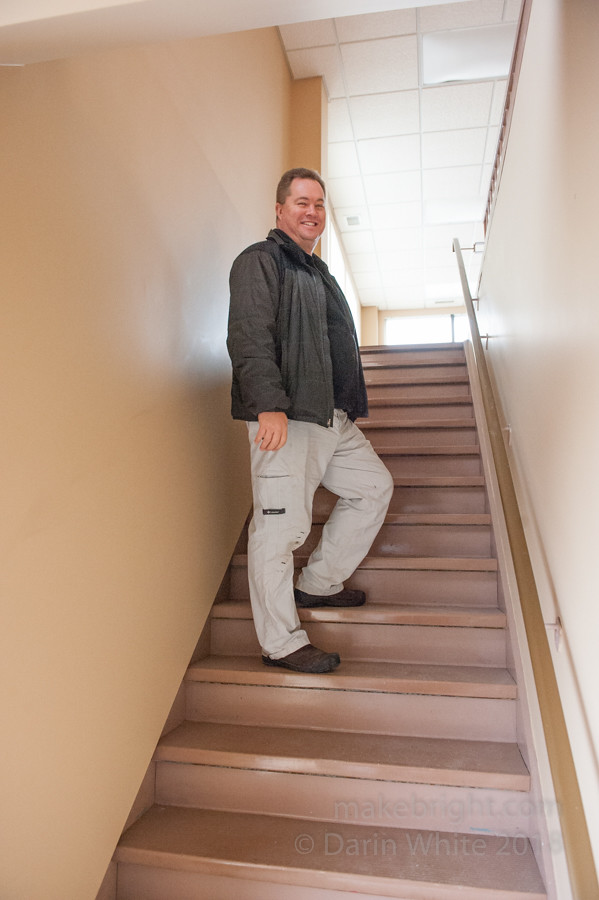 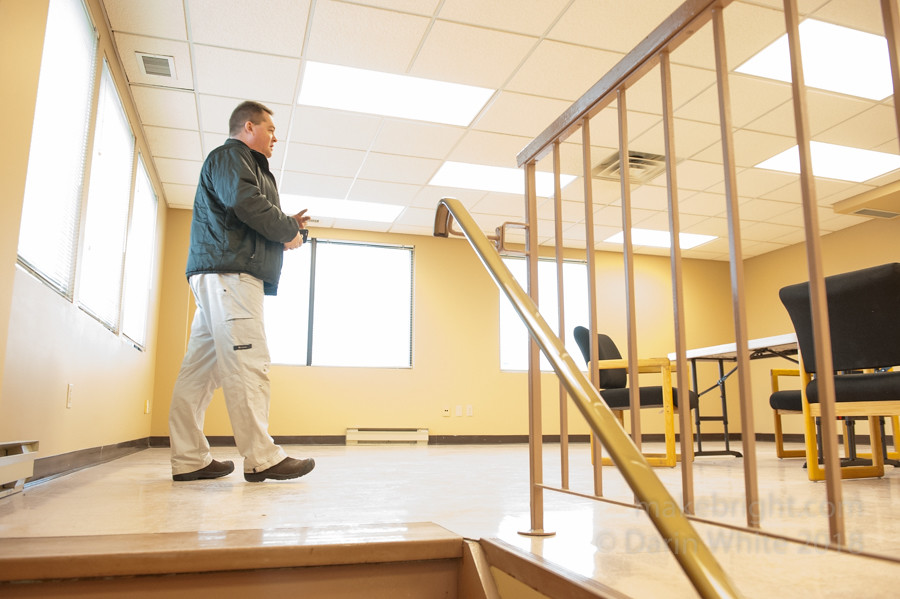 to the second floor… 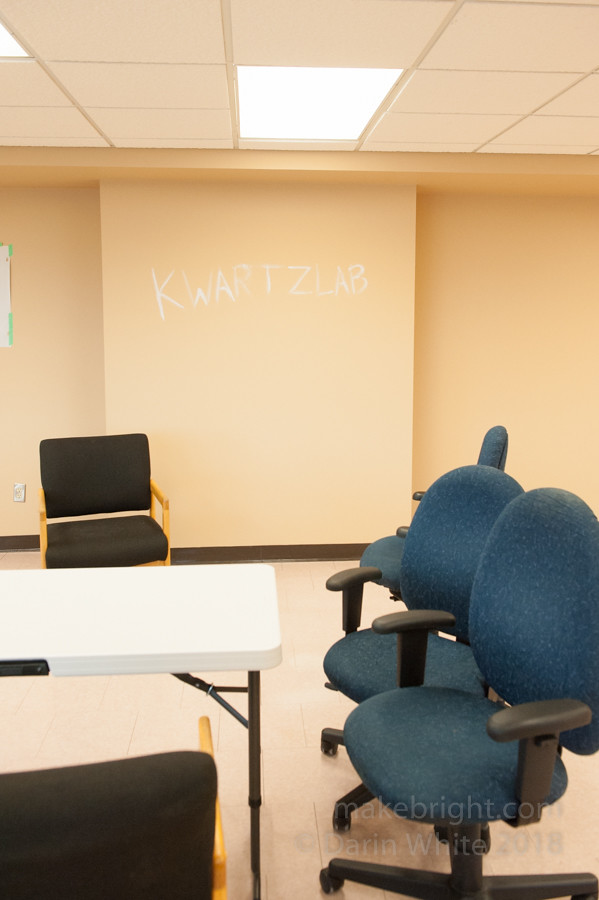 in what will be the lounge and public area. 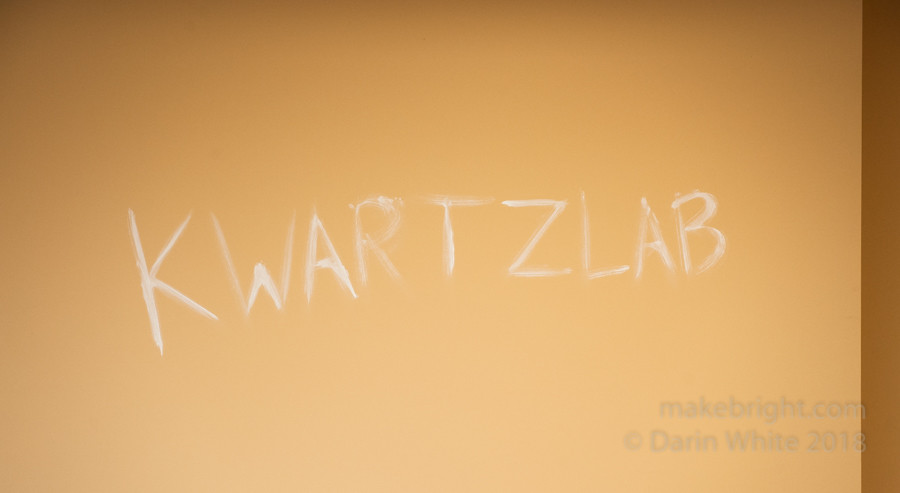 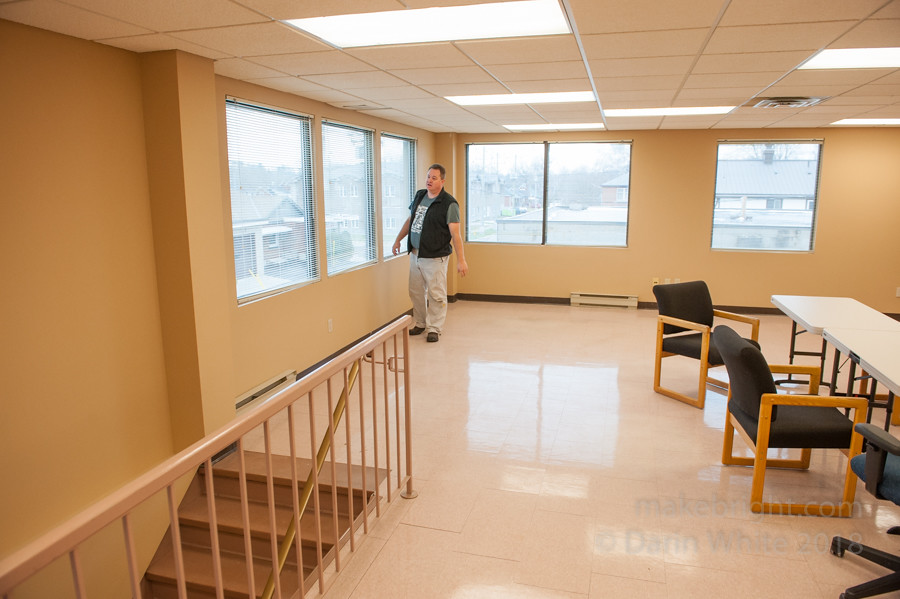 Cam didn’t know he was going to be modeling, but I needed a person in these shots for scale. 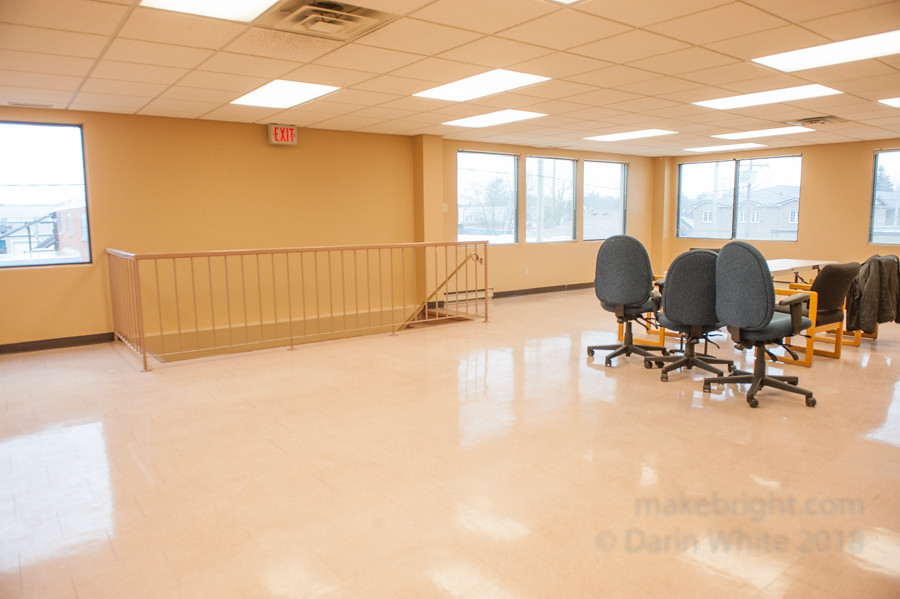 Cam described a more… coherent approach to furnishing and interior design in the new location. First impressions, and all. 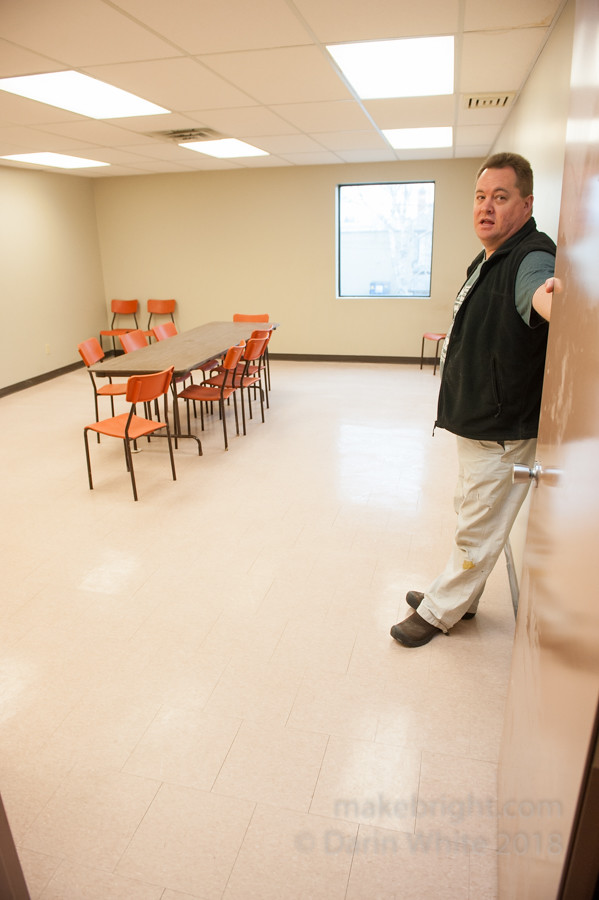 Heading deeper into the space, a separate room… 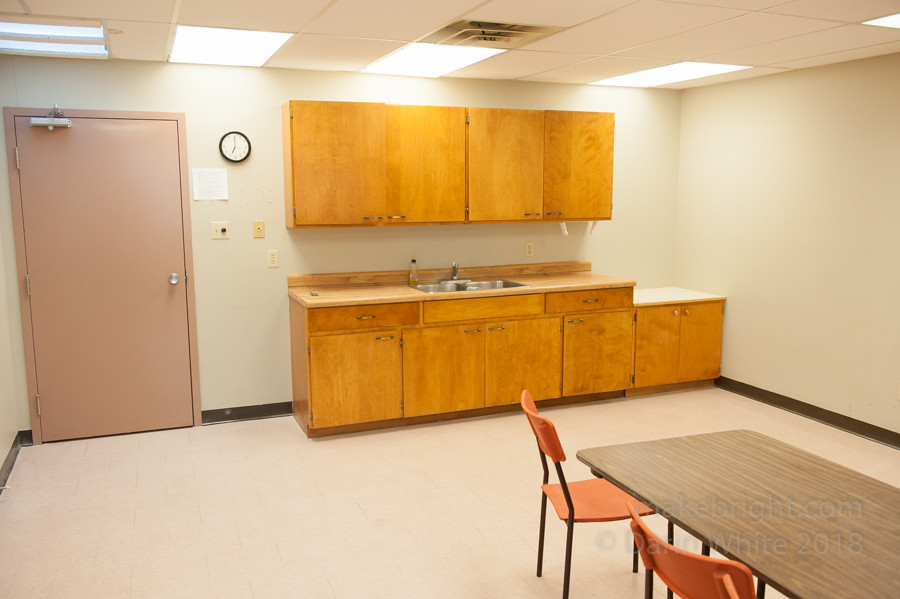 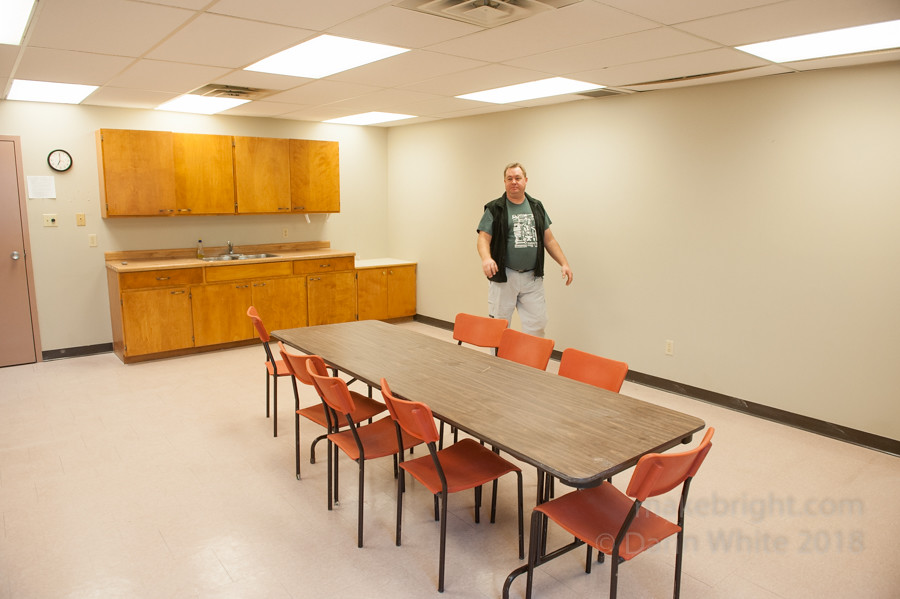 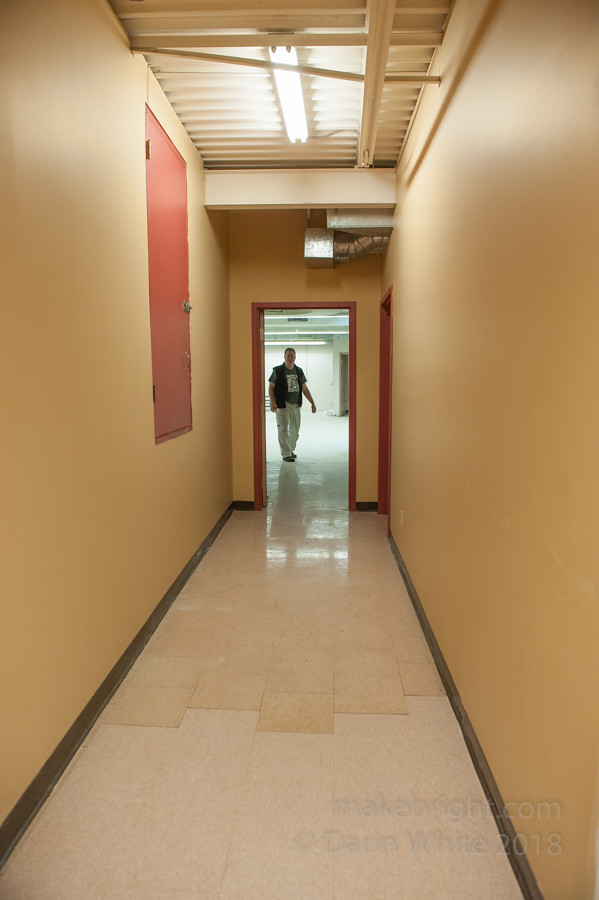 And further into the building… 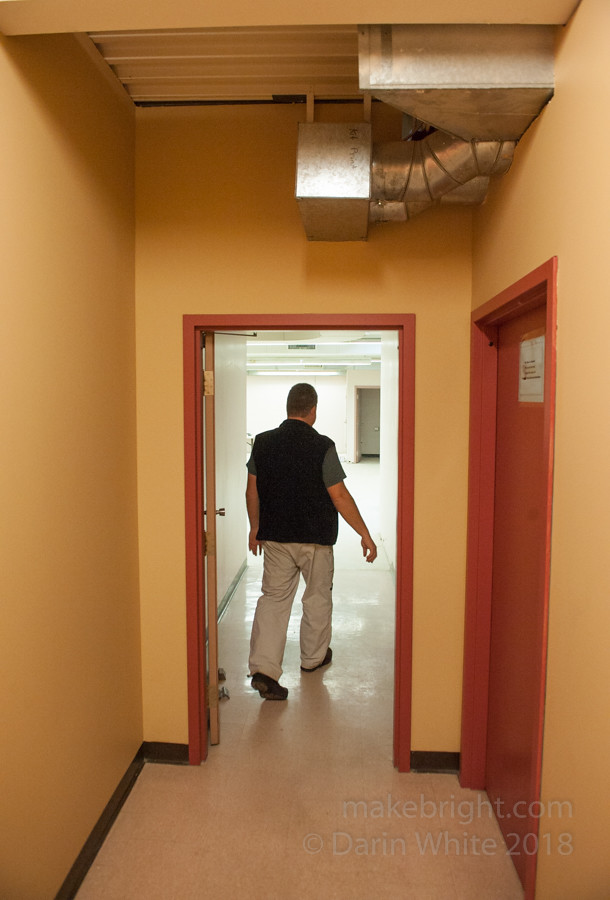 in what I believe will be a members-only section… 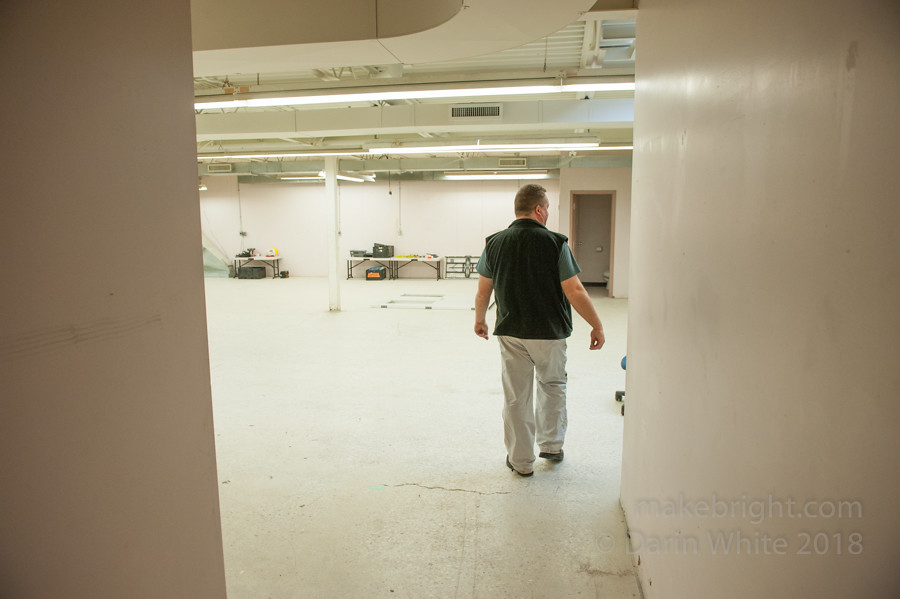 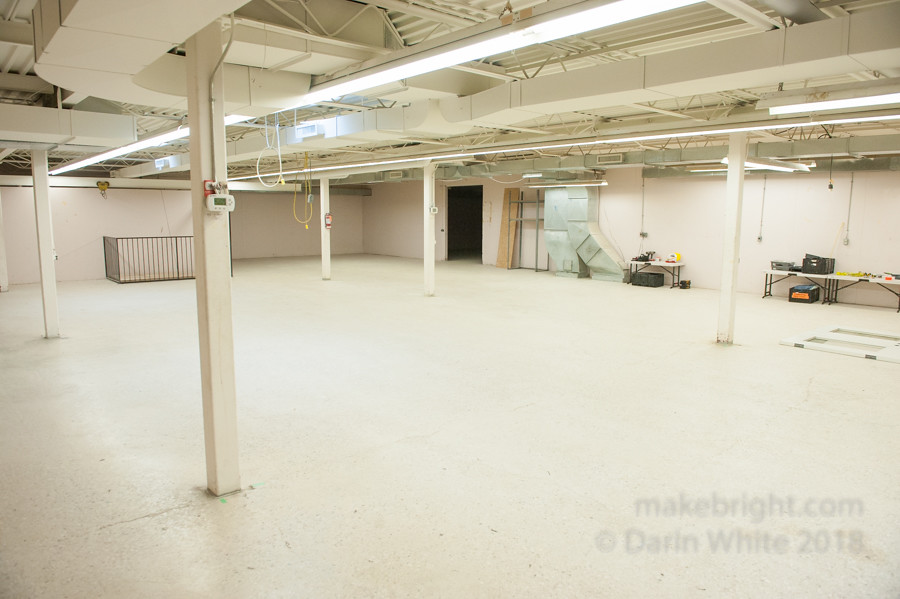 This large room will be partitioned into work-specific areas as well as private member studios. I already see green painter’s tape marking out the walls into 8×10’ rooms and bigger shops. kwartzlab picked up a bunch of reclaimed pre-built, dry-walled walls last month for just this purpose. 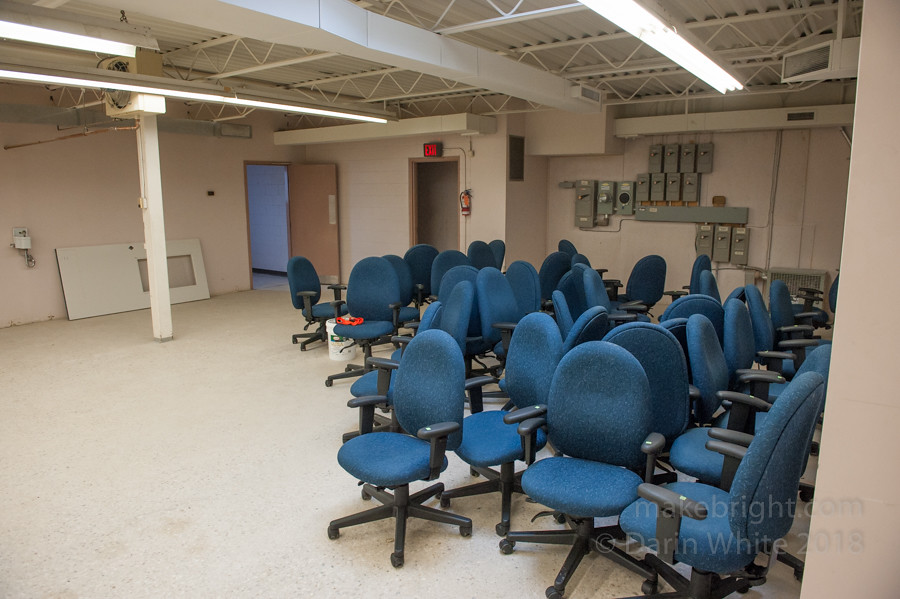 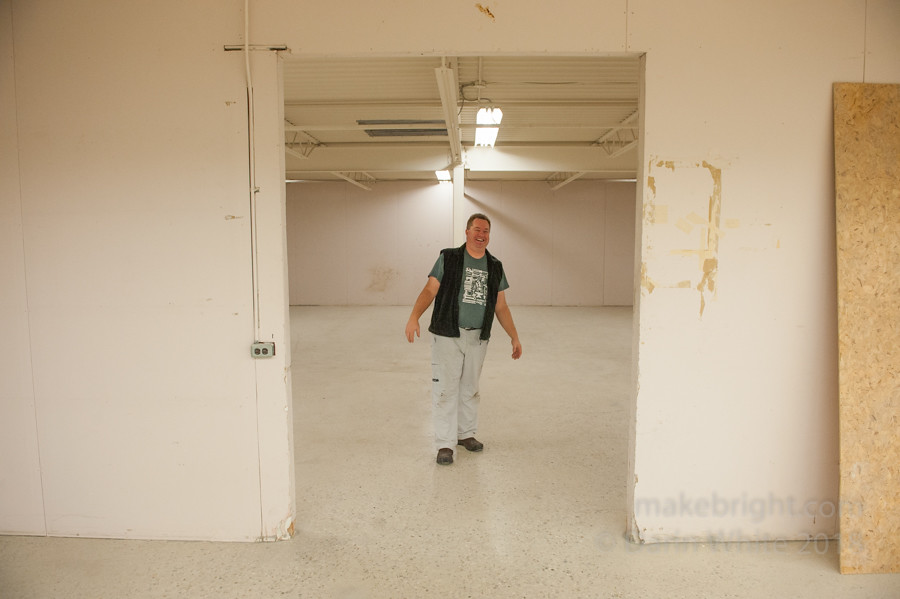 The heavy lab for machining and metal work. Happily, it will now exist separately from the space designated for woodworking. 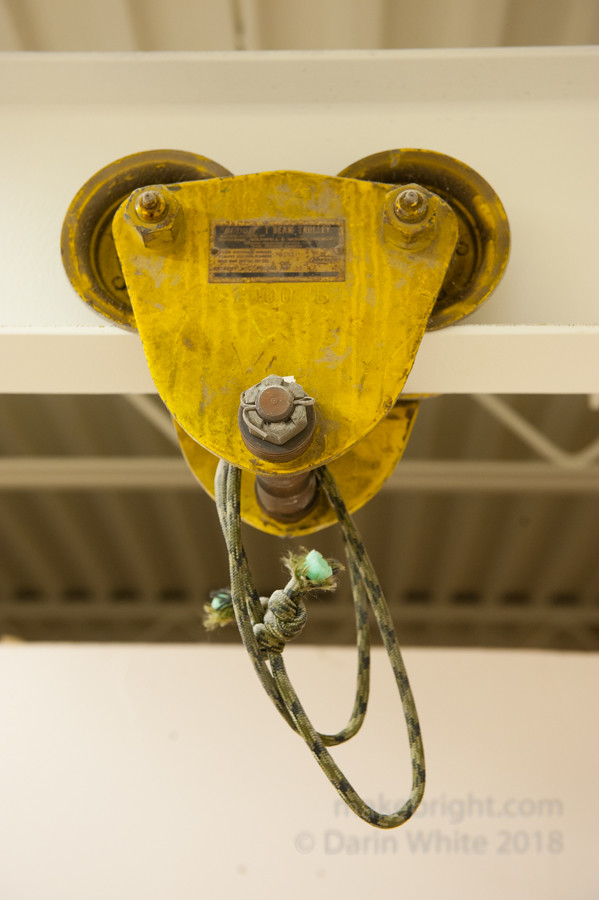 Speaking of “heavy”, there is a port in the floor that will allow the big tools to be moved in. 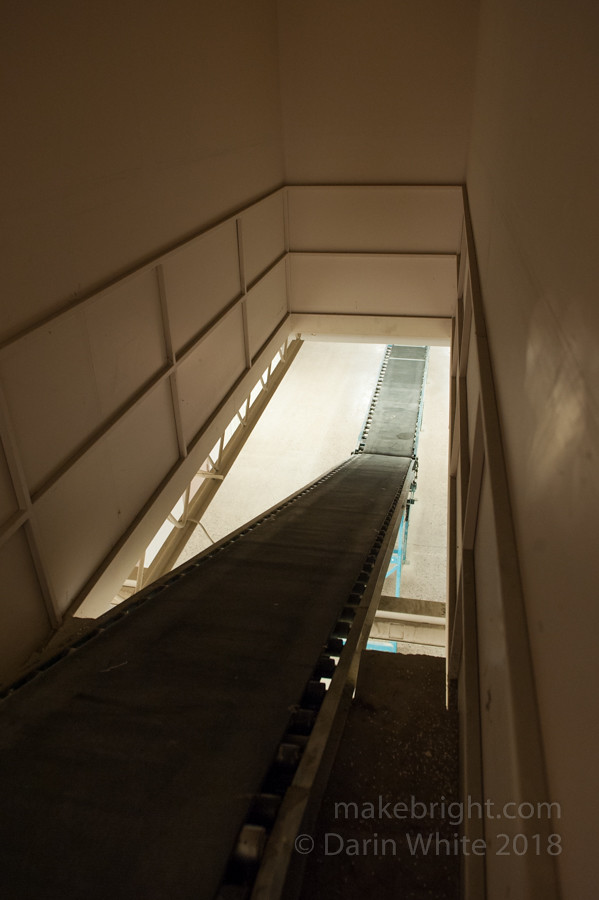 There’s also a conveyor belt up from the loading dock, which should make moving other stuff a lot easier. 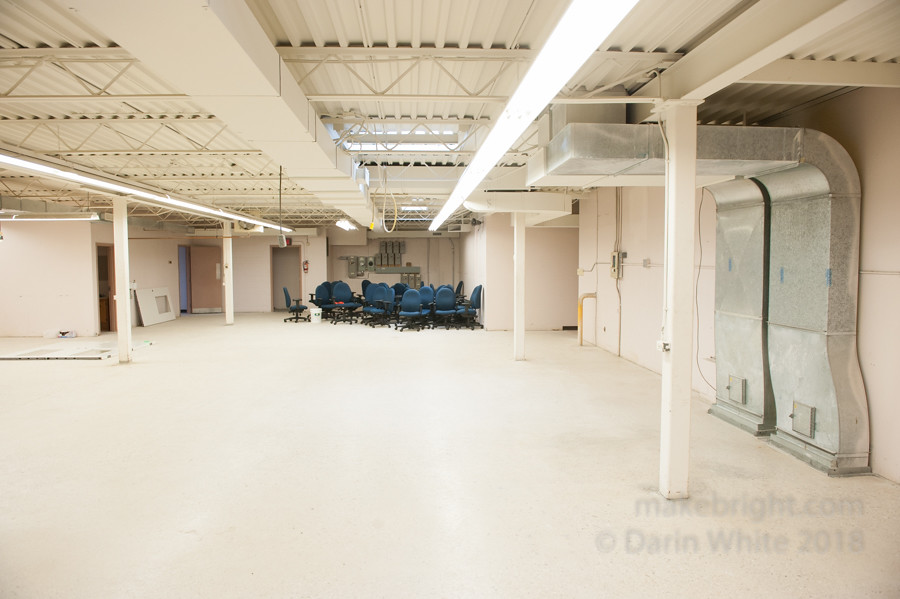 This space is cavernous. Hard to convey visually when it’s mostly empty. 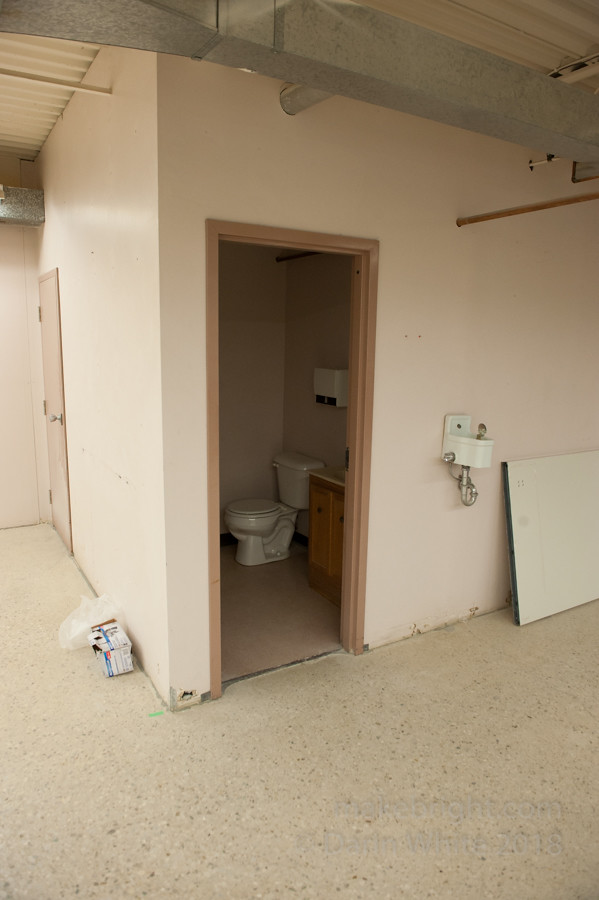 Two washrooms, this time. And office space (a different room) for the board of directors and for IT gear. 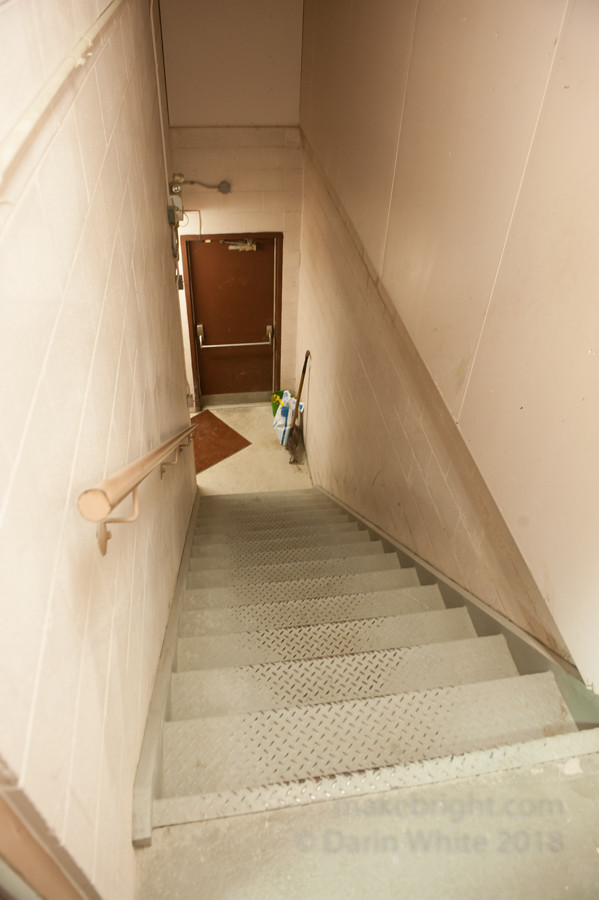 Member entrance, out to Bedford. 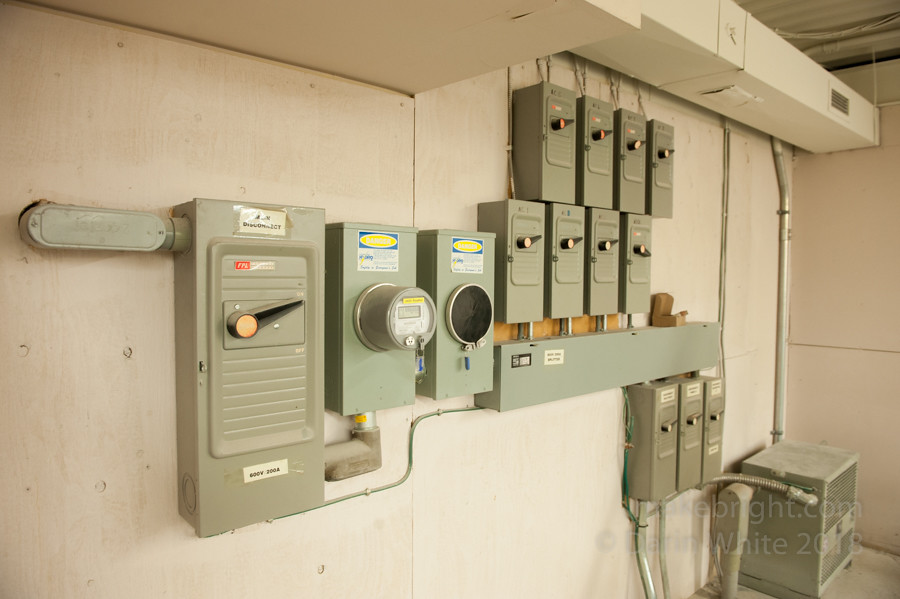 And… they’ve got the power!

My excitement is off the charts for what will be here. I’m showing you the empty shell, so that later, in all its glory, you’ll know that the magic of kwartzlab is the people.

This entry was posted in kwartzlab, Uncategorized and tagged makerspace. Bookmark the permalink.

1 Response to kwartzlab on the move