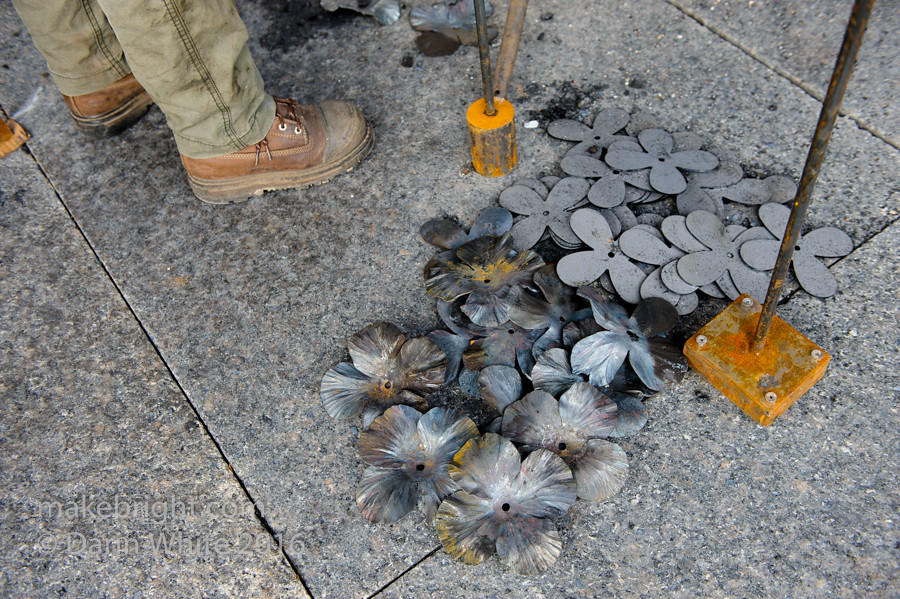 My very good friend Sandra Dunn is one of 12 international blacksmiths invited to create a panel for a World War I Cenotaph in Ypres, Belgium. In September, Sandra will lead a team of six blacksmiths in Ypres to build the railing for this cenotaph that incorporates the forged steel poppies from around the world. Blacksmithing organizations across Canada have organized poppy making events from Vancouver Island to Ontario, Quebec and the Maritimes.

On Remembrance Day last year, I caught up with Sandra and her apprentice Bronson Kozdas forging some of these very poppies out in front of Kitchener City Hall. With a crew from the Ontario Artist Blacksmith Association, they were hammering out textured flowers from these flat steel blanks in the photo above.

I wanted to put this story out now because one week from tomorrow on May 7, there will be another poppy forging event. This time it will be held at McCrae House in Guelph. Yes, that’s the birthplace of Lt. Col. John McCrae who penned the famous haunting poem “In Flanders Fields”. This event is being hosted by Ypres cenotaph designer Terrence Clark and his daughter Rebecca Knott, here all the way from the UK. Kids are encouraged to try their hand at forging steel poppies and admission is by donation.

Speaking of donations, I’ve got more for you here, but first I’ll pass the virtual hat in hopes that you’ll kick in a buck or two to help me bring stories like these to light. There are no ads on makebright. There is no paywall or different levels of access. There is just the work I put out. My awesome Patreon supporters kick in small amounts of money per post with a monthly cap because they’re investing in Waterloo Region. If Patreon isn’t your jam, you can donate in person like my Mom did. If you dig my community-building work, please support it with your pocket change. Ok, now more story. 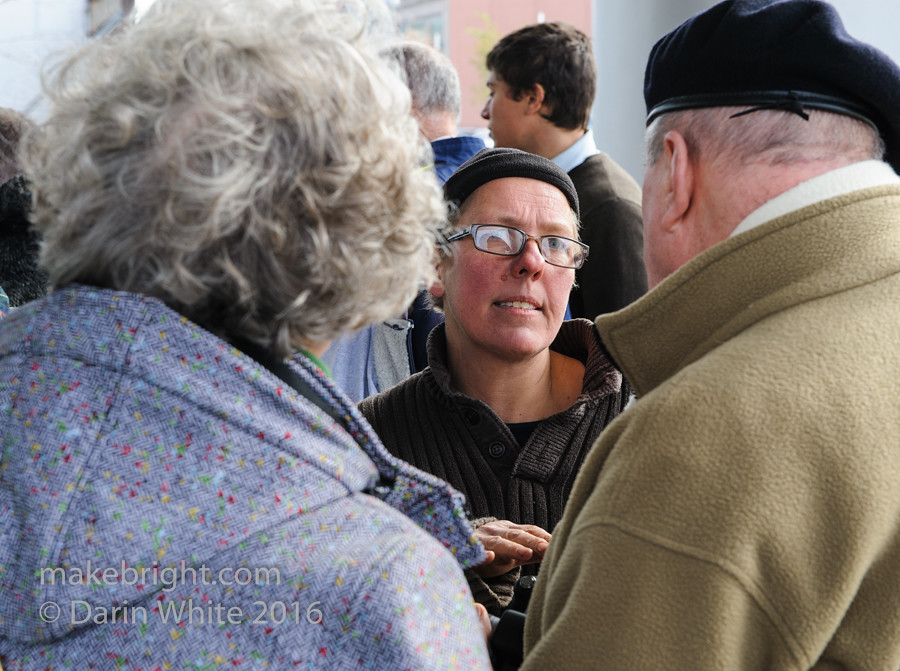 Here’s Sandra talking to the crowd. I have massive respect for her mastery of blacksmithing and she’s also a helluva nice person. I did a profile on her after a terrific tour of her shop down on Ardelt in Kitchener. 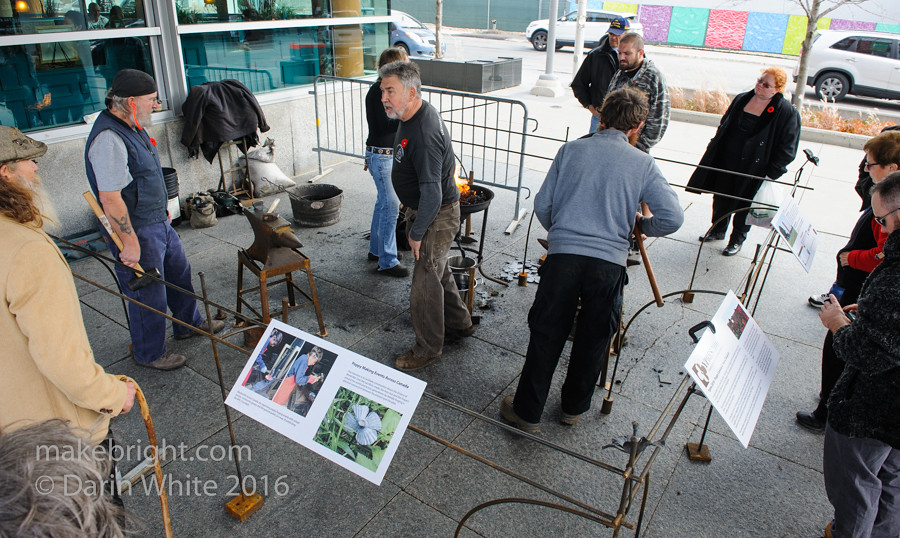 My buddy James Bastow and I were heading down to the Duke Food Block for lunch when we happened upon this setup. In fact this is where we had Sandra and Bronson stationed for Maker Expo earlier in September. 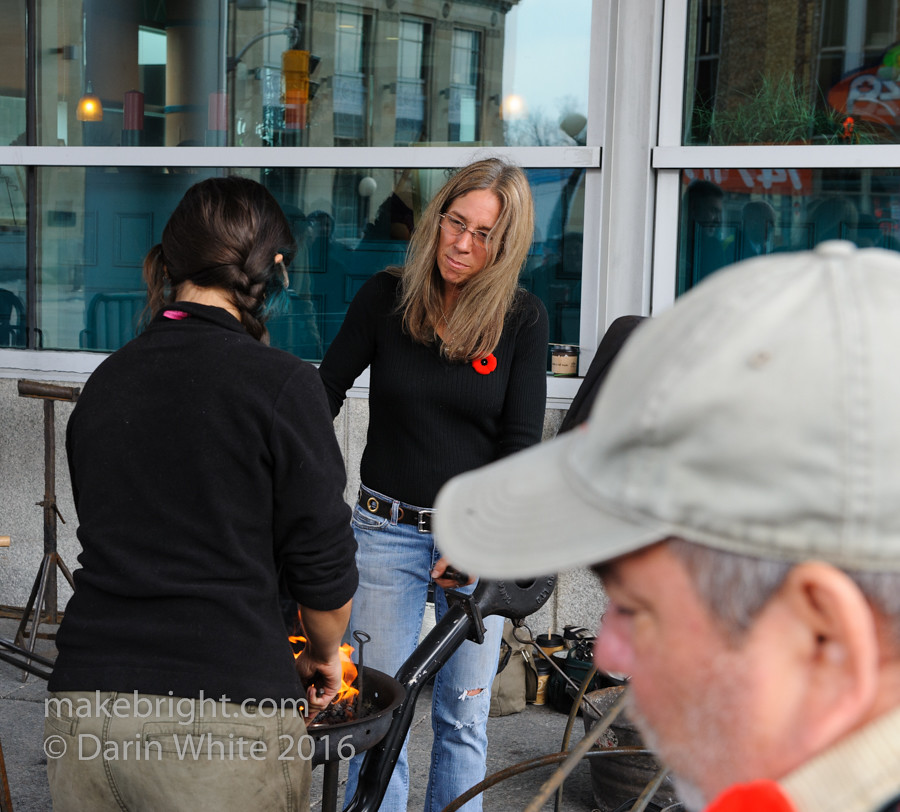 Lots of people with fire… 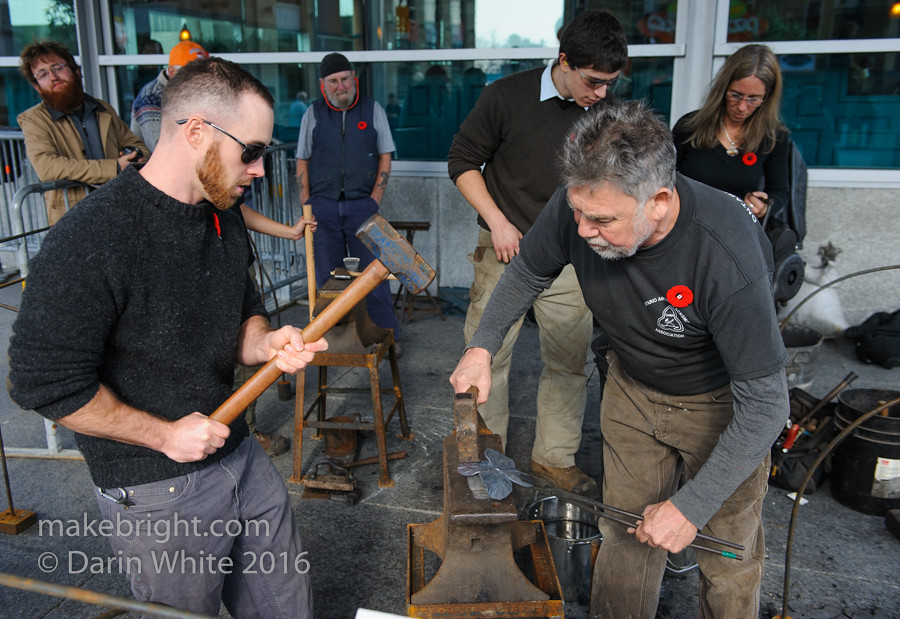 hard at work. As I’m understanding it, the flat steel blanks are held over a die on the anvil and then riveting(?) hammer is set on top and whacked with a sledge. Of course you first need to… 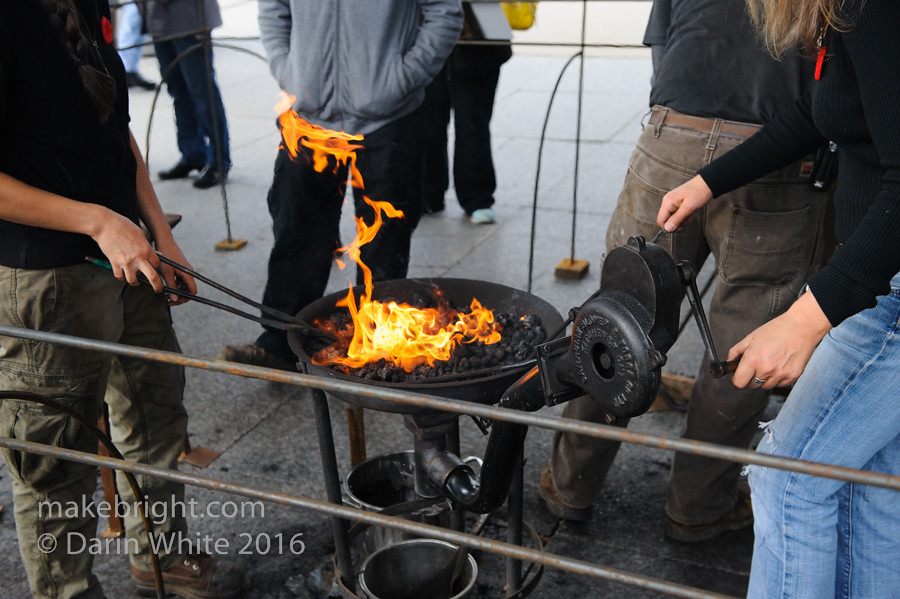 heat up the blank first. The blower on this portable coal forge reads “Canadian Blower & Forge Co – Kitchener Ont”, a company incorporated in 1915 in the city of Berlin, one year before the name was changed to Kitchener. 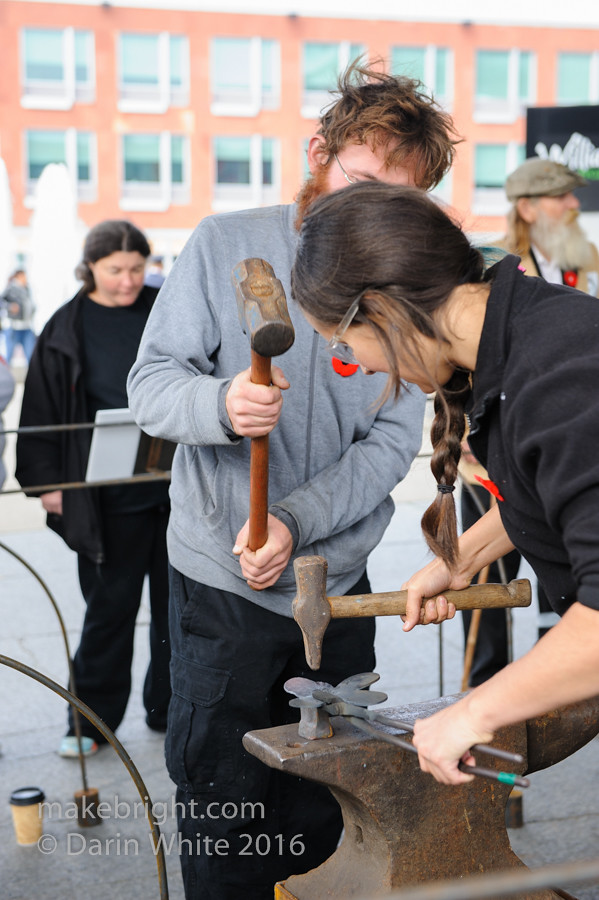 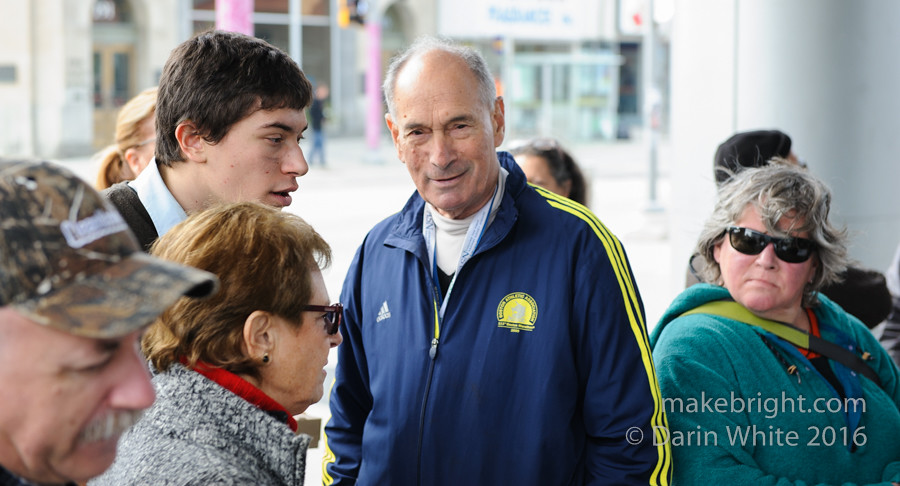 I found Bronson (left) on a rare break. Judging by family resemblance, I’ll assume it was a close relative who nudged him to get back to work now that the photographer (me) was there. Bronson laughed: “Darin’s already got lots of photos of me.” 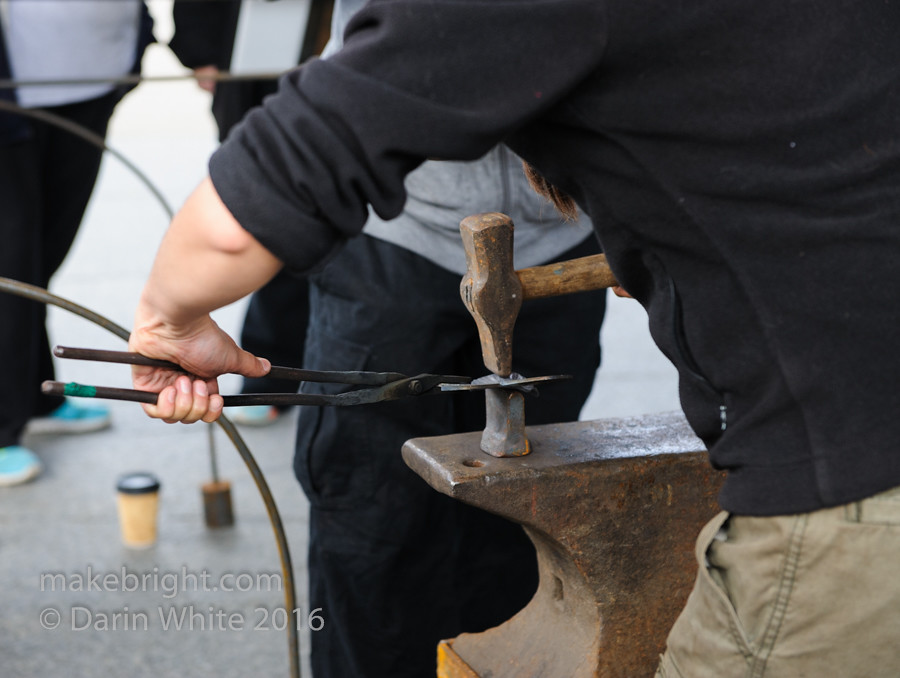 Sandra and Bronson did a poppy forging workshop last year for students in Walkerton who had just returned from a class trip to Ypres. They also did workshop in Montreal during Nuit Blanche in February. 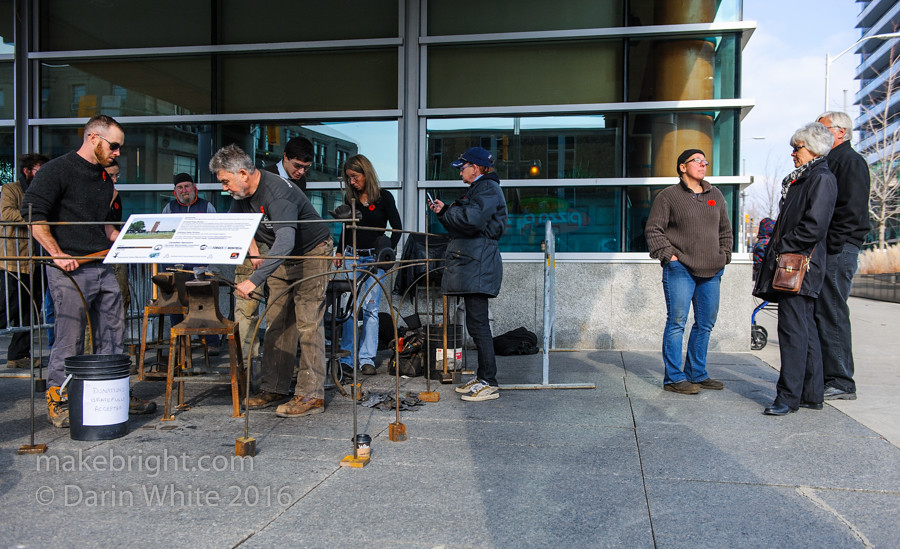 To participate or support this project here in Canada, you can reach out to: 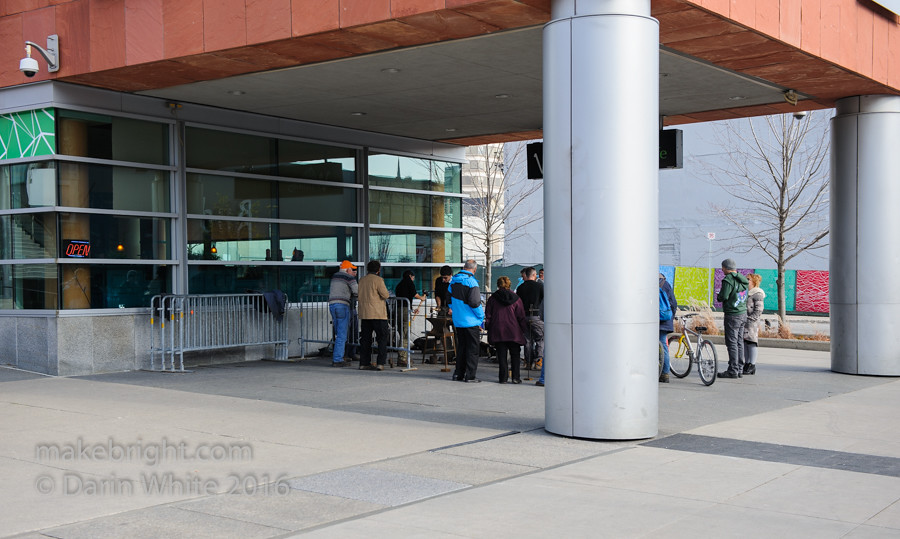 Around Maker Expo the saying goes “We are all makers. This is Waterloo Region.”  Here’s another example of the long reach of our creative undertakings and industrious nature far beyond our borders.

At King and Young Streets, this is Kitchener.

This entry was posted in community and tagged blacksmith, Kitchener, learning, makers. Bookmark the permalink.