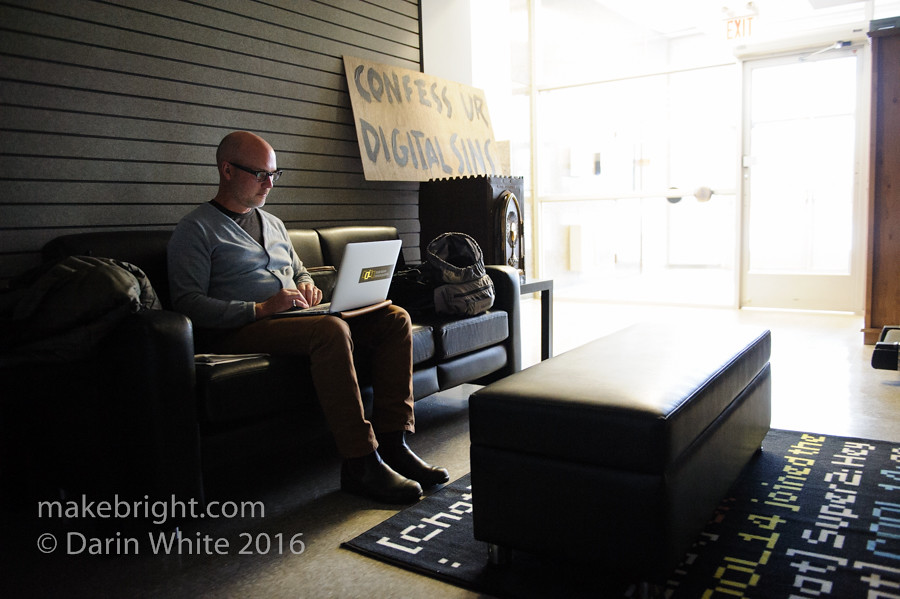 Last week I hit Salon #2 at the Critical Media Lab at Gaukel and Charles. “DW, why are you talkin’ about this again so soon?” you may be asking. Well, dear reader, I love this series: format, talent lineup, crowd. The whole deal. Yeah, I know 5:30pm is a tough time to make, but honestly there’s no perfect time for everyone, so let’s just show up. It’s fair to say that popularizing the salon sessions serves my self-interest of wanting the series to continue beyond #3.

Here’s Associate Professor Andy Houston, first speaker up, waiting with me for class to finish in the main room. Andy is acting chair of UW’s Drama Department.

I’ve got more for you here, but first: self-promotion. There are no ads on makebright. There are no pop-ups that ask you to turn off an ad-blocker. My awesome Patreon supporters have helped me surpass “gas-money threshold” of $30/post. At the $320/post level, I’ll be able to devote a whole day a week to searching out these stories and delivering them to you.  If you dig my community-building work, please support it with your pocket change. Ok, now more story. 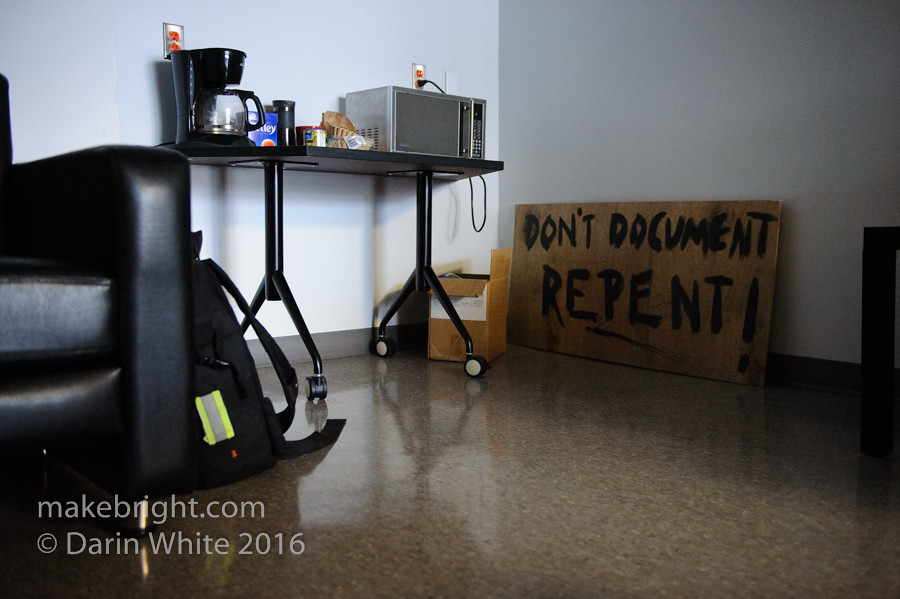 The first time I ever visited CriMeLab, I found a giant cow sculpture. The hits just keep on playing here. I could only stay for the first speaker as I had to haul up to the St Jacobs-based Felt Lab for a 7pm meeting #2 of the Waterloo Tape Music Club (post on that coming shortly).

Andy’s talk on site-specific dramatic performance was one where I had no idea what to expect. I didn’t know this was even a thing. So this is exactly the kind of talk I want to attend because it stretches me a bit. 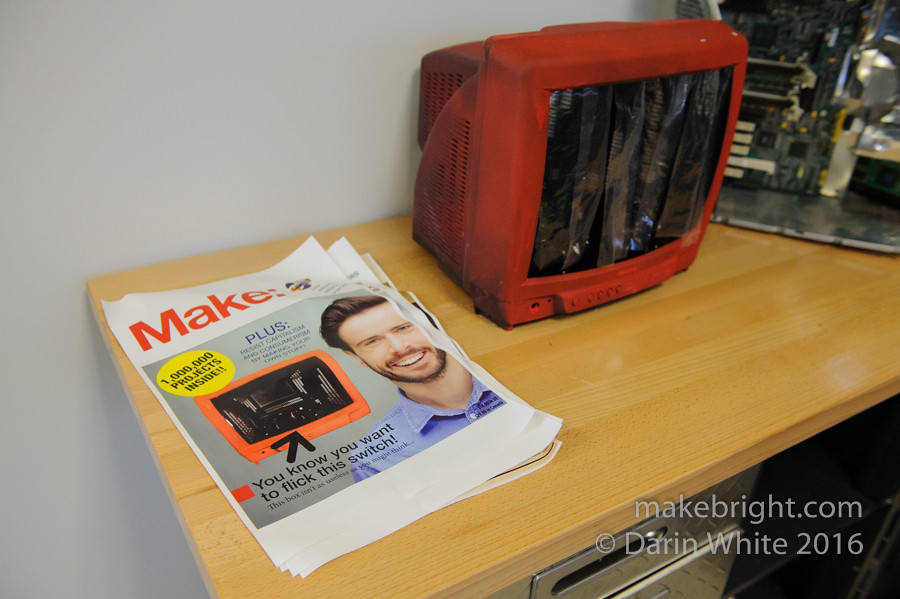 Ah, a student project, complete with… 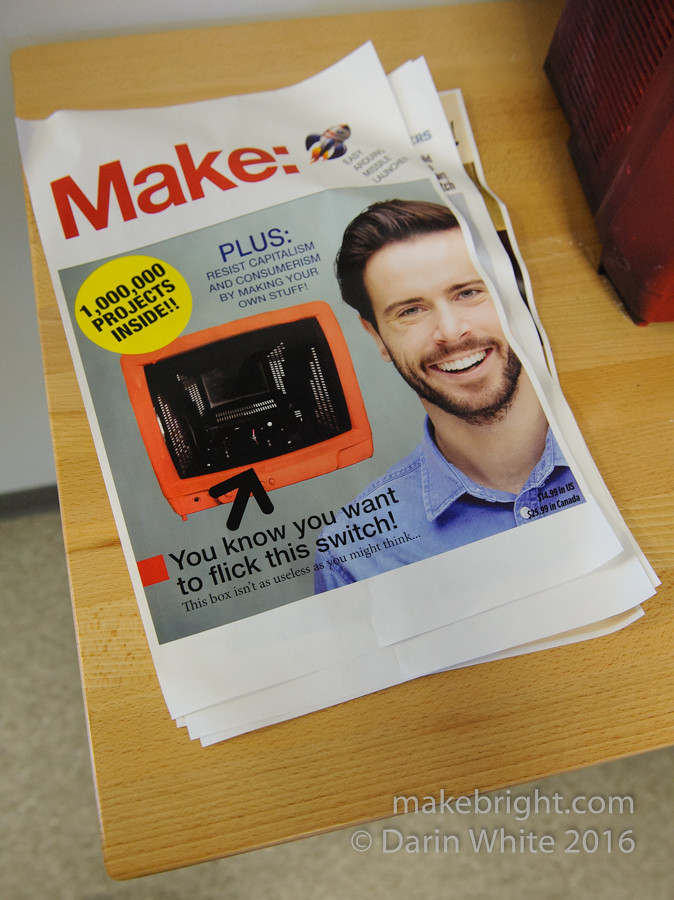 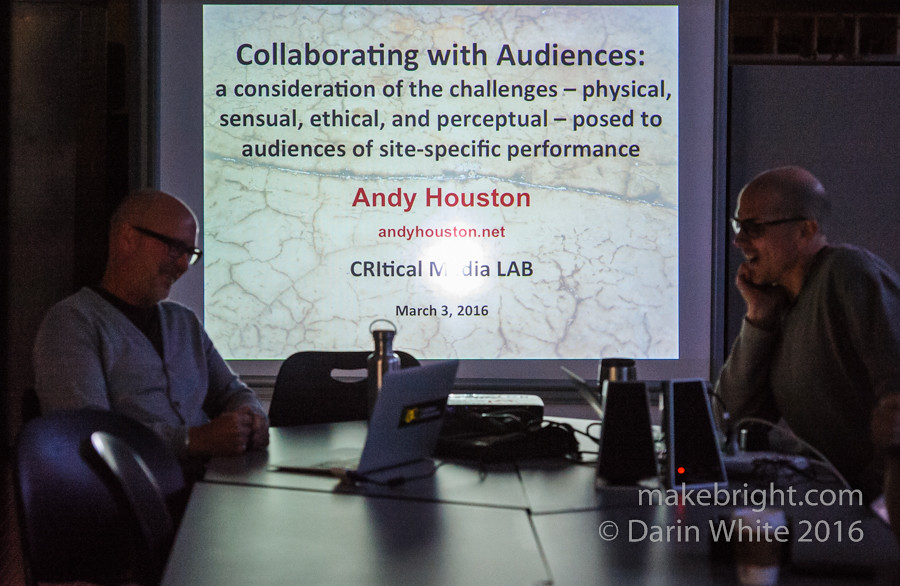 Marcel O’Gorman (right), godfather of CriMeLab, was hosting that night. 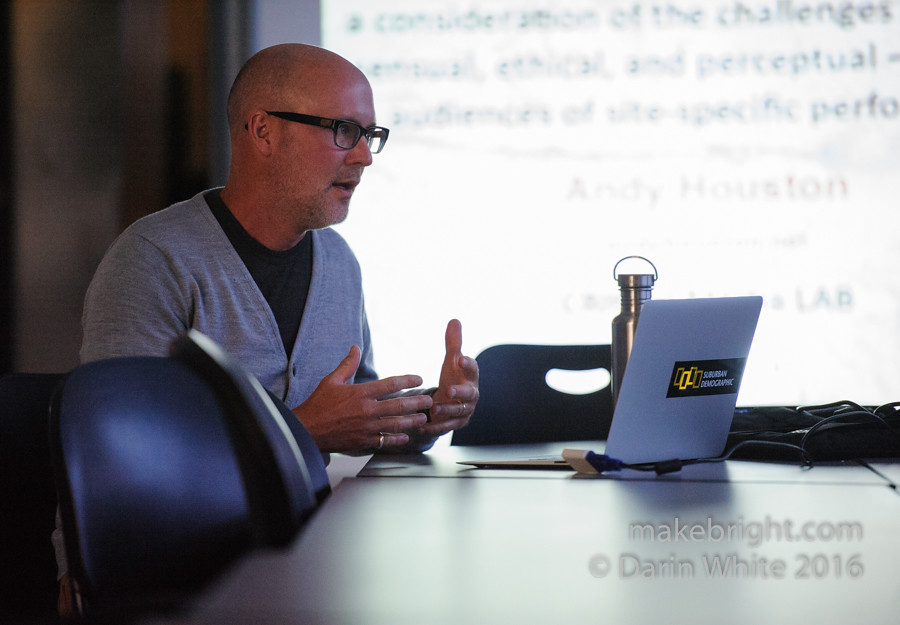 Andy described a project he worked on in the southern Saskatchewan town of Ponteix. The project, named Windblown Rafales, was centred around the centennial celebration of the town. 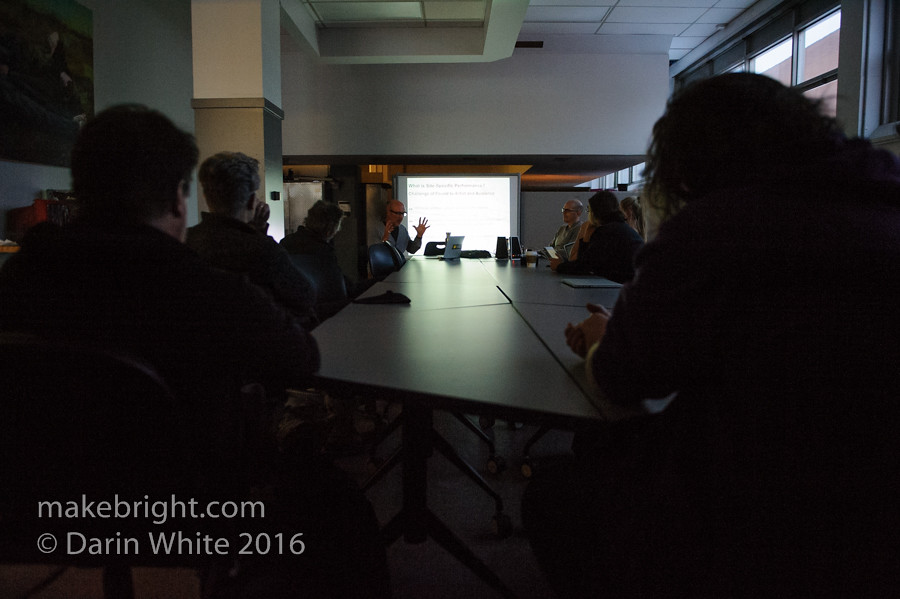 The performance was developed over a number of weeks in the summer of 2008. The coordinating crew of Knowhere Productions camped out in the school gymnasium, embedding with the town of 500, meeting the people, exploring the history and experiencing the opportunities and challenges of isolation on the prairies. 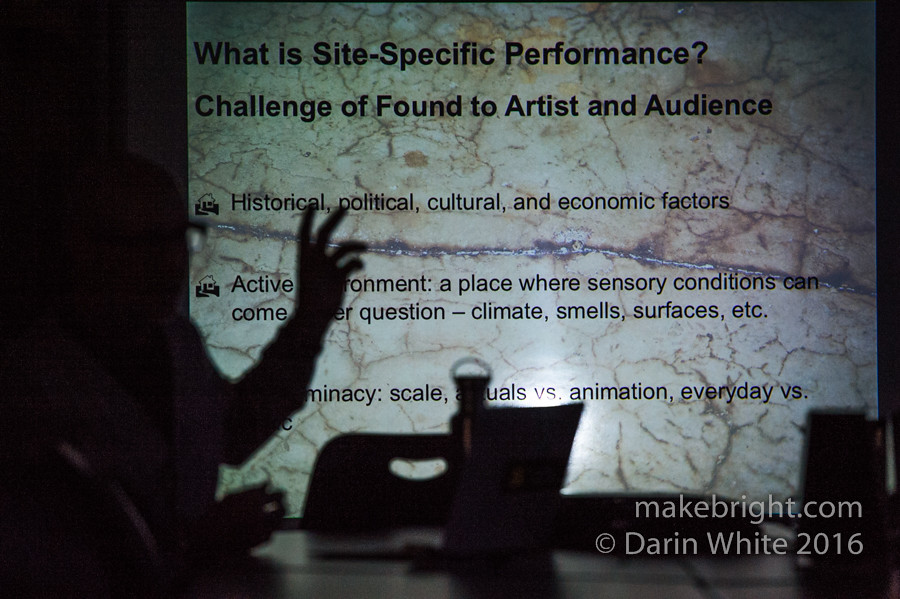 Despite being invited to the town by the parish priest, Keith Heiberg, the production team experienced challenges putting on a secular performance based around the notion of a pilgrimage that started at Notre Dame D’Auvergne Church. I know from experience that a church has many different “bosses”, traditions and taboos. Andy gave a shout out to Father Heiberg for helping to smooth the waters. 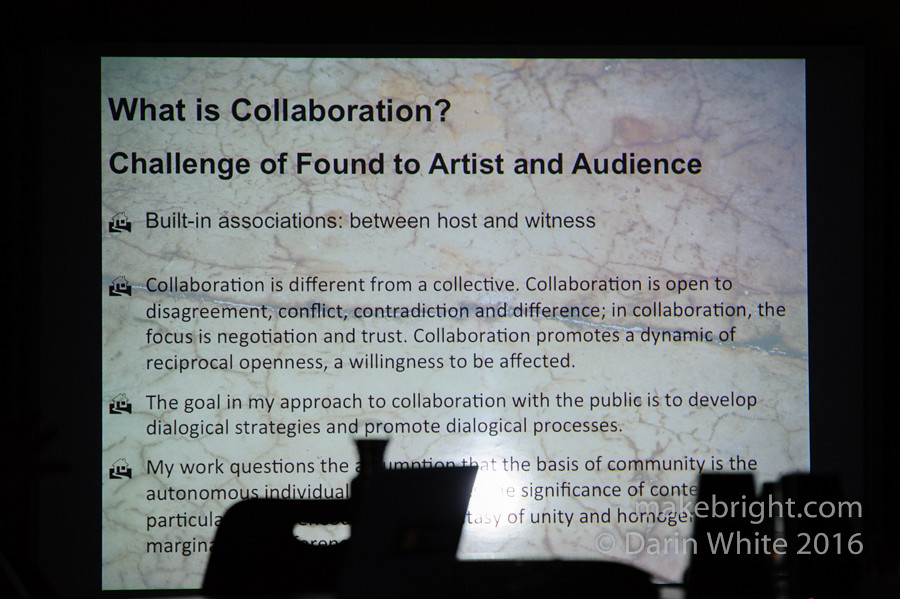 Interesting collaborations with locals included a surprising connection with the school janitor and his sculptures, that were incorporated into the performance. I suppose you could think of the big turnout for the final performance as the most important collaboration. 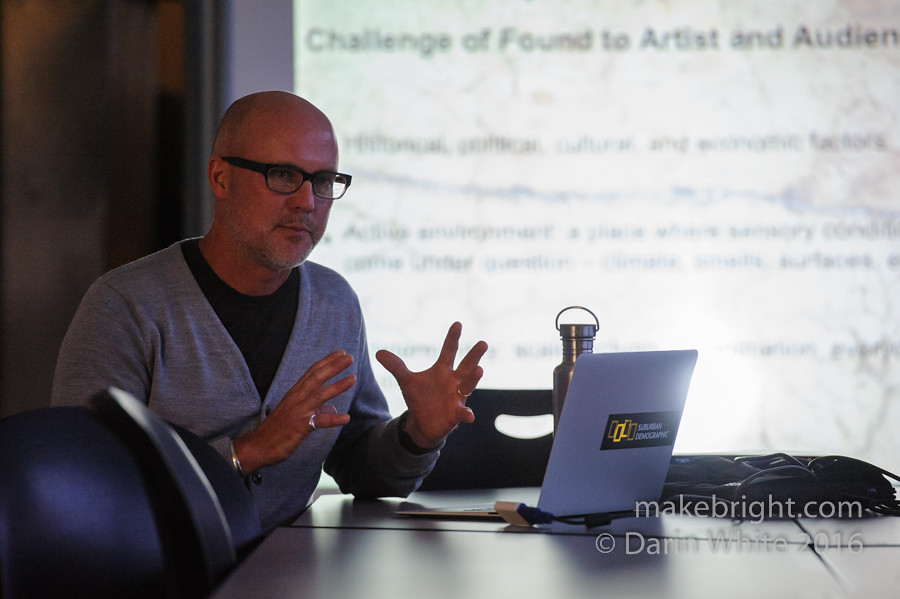 From the church to a former hospital to an orchard and finally back to the parish hall, the production included multi-faceted performances of dance, storytelling, puppetry and song. Regular readers know that I’m a big fan of cross-discipline projects. Something that intrigued me most about this gig was the self-awareness of the production company as “parasite” in the sense of disrupters. I think about this in my own work as I get all up in other people’s business with my camera and stories. I think about the observer effect and also about the social echo after the story is told. I reject the Star Trekkian Prime Directive notion of non-interference. 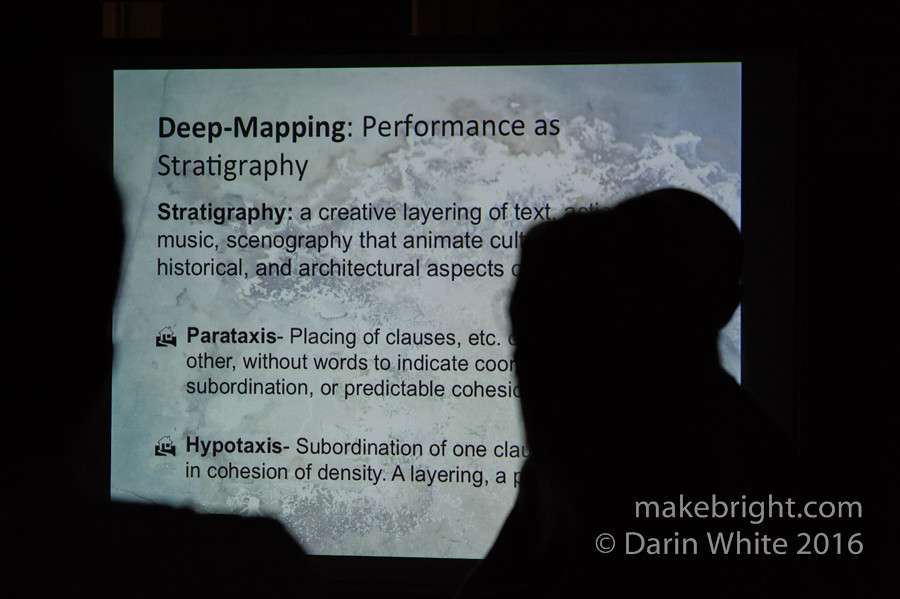 Andy did a good job of explaining in plain English various aspects of Windblown Rafales. As I dug into some background material later while writing this piece, I found the domain-specific language very opaque. I had to look up a lot of terms like: discursive hierarchies, stratifications, dialogic, abject, epistemological. There were also a lot of references to other work/writing within the dramatic domain that are lost on me. But here’s the point: to grow beyond your boundaries you gotta stretch, take what you can, momentarily suspend your WTF’s, and do a little legwork. Life ain’t Netflix. 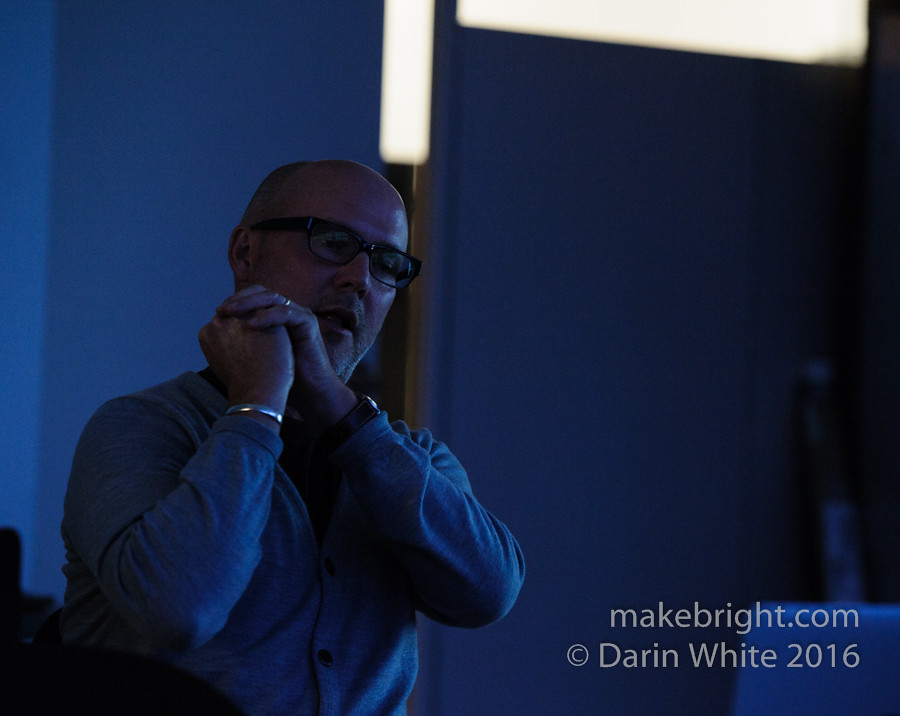 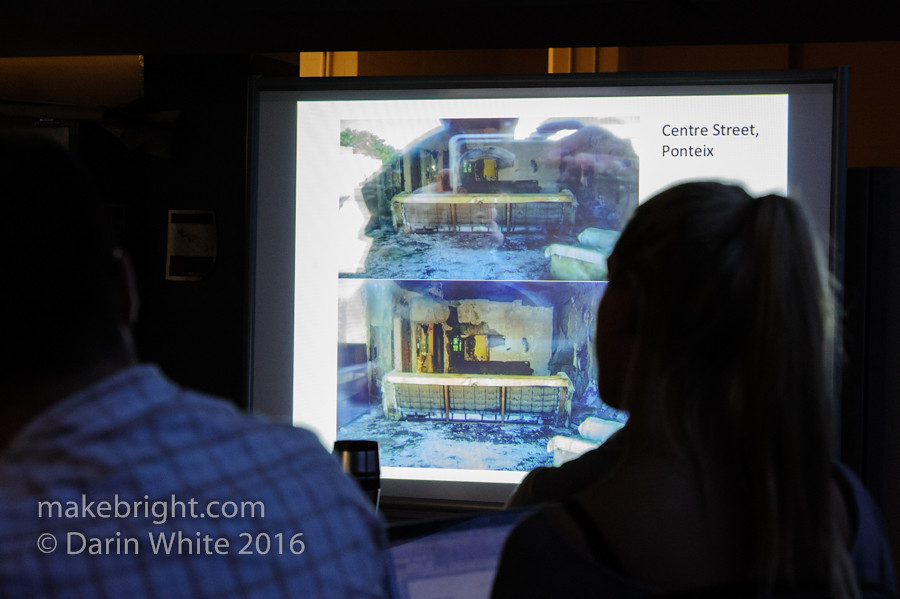 from the edge of the country out on the grasslands… 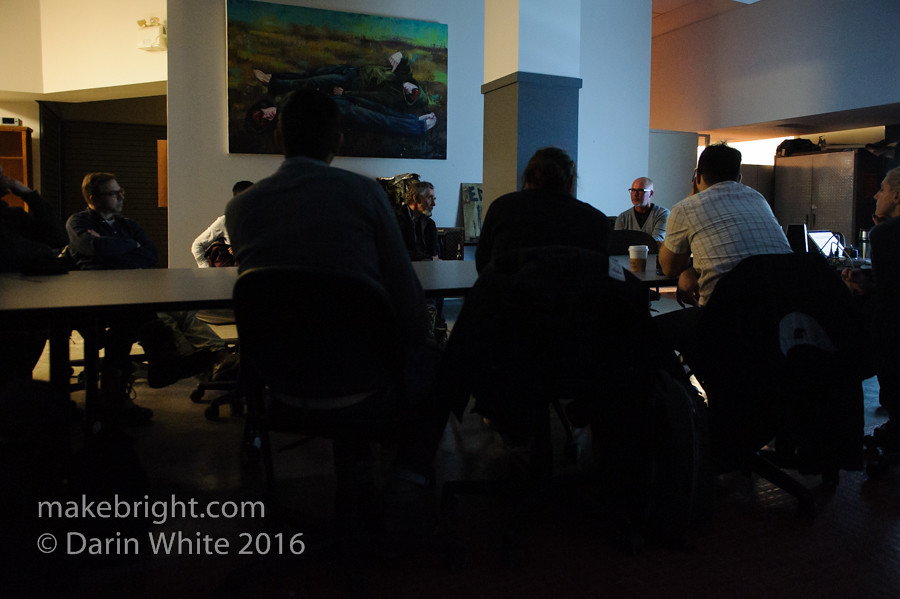 to the heart of Waterloo Region.

Not lost on me is the double meta-level of me experiencing some aspect of drama that itself interprets through performance. Catch more on Andy and this project at his site or the project blog.

From Charles and Gaukel, this is Kitchener.