Barry Katz on how TO;WR can rival Silicon Valley 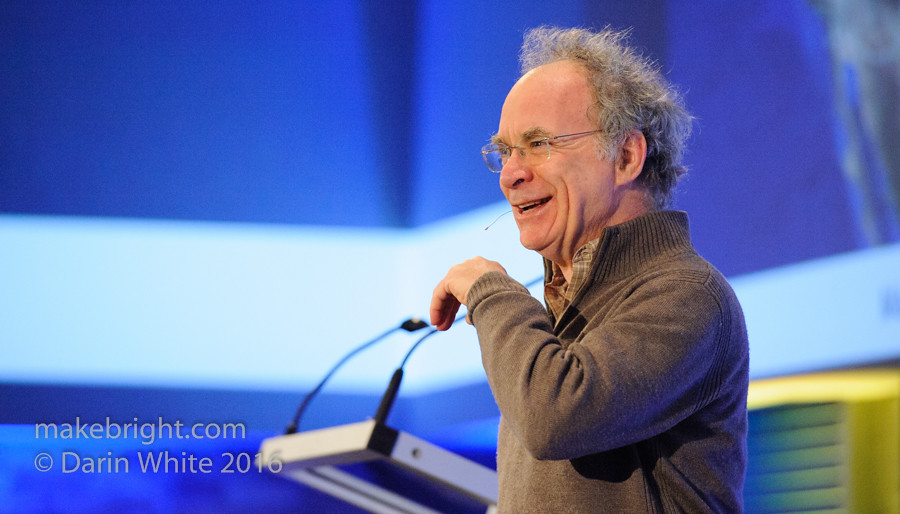 Barry Katz’s short answer to the notion of how [Waterloo Region + Toronto] can rival California’s Silicon Valley is simple: “You can’t and you shouldn’t.” He elaborated by saying that Silicon Valley is the product of a 45+ year evolution of an ecosystem (and warned us away from that buzzword) that simply can’t be reproduced. He fields this question frequently from international visitors dropping by Stanford University where he is a Consulting Professor in the Mech Eng Design Group. Dr. Katz (say KATE-z) is also a Professor of Design at California College of the Arts and an accomplished author. He is in Kitchener to teach a 2-day Design Thinking bootcamp at Communitech. The local crowd of 200 at the breakfast talk this morning listened closely to this man who very modestly said of his extensive bio “I guess this is where I tell you about myself” before moving quickly on to the meat of his talk.

I’ve got more for you here, but first: self-promotion. There are no ads on makebright. There are no pop-ups that ask you to turn off an ad-blocker. My awesome Patreon supporters kick in small amounts of money per post with a monthly cap because they’re investing in Waterloo Region. If you dig my community-building work, please support it with your pocket change. Ok, now more story.

Barry is a Fellow at IDEO, the design firm that captured my makerly attention many years ago with their cross-discipline approach to kick-ass and human-friendly design. This was the hook that pulled me into this talk, but the takeaway was much broader and echoed my own thoughts on the best ways forward for Waterloo Region. “Leverage your own strengths”, Barry said, noting that rather than just planting a bunch of tech firms here, we need to build out a whole ecosystem that supports all constituents in that system. 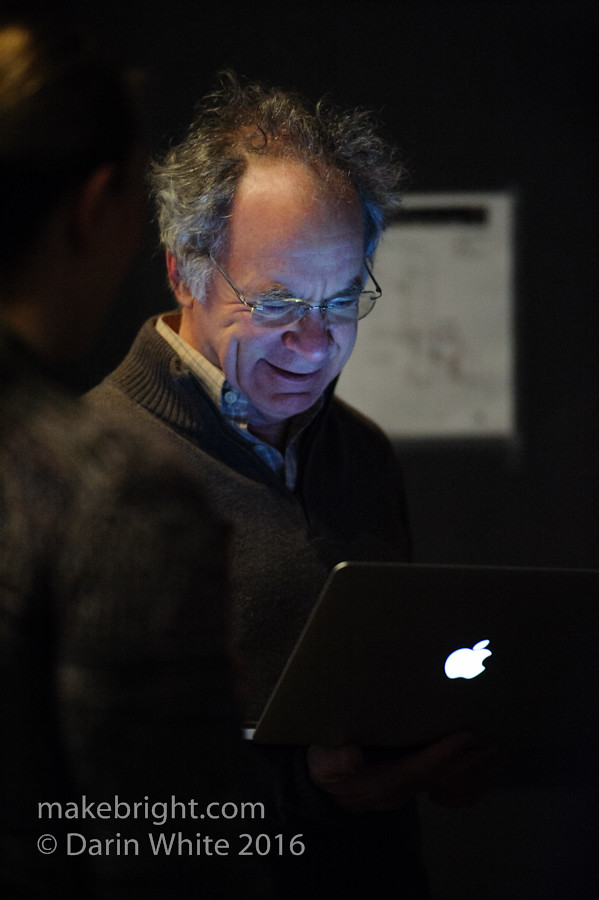 An aside: it’s a big deal that Barry Katz is here… in Waterloo Region. When it comes to the deep thinkers and heavy hitters who visit our small corner of the world, I’m keeping score. This is a radically different place than it was 23 years ago when I moved into the Doon area of south Kitchener. How we think of ourselves, our collective self-image, lags the reality of the transformation. I think if we relax our Canadian modesty for a moment, we can be damned proud to play on an international stage.

Click through for a few more thoughts and pics… 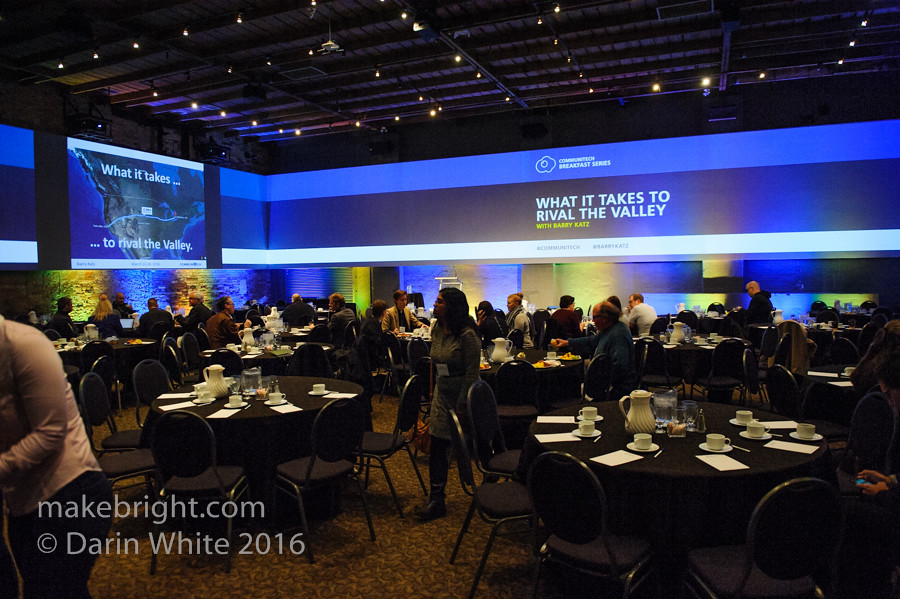 Had to pass on my regular monthly morning meetup around the corner at Kava Bean to attend this one. I’m sure the WR Community Developer Breakfast crowd understood. 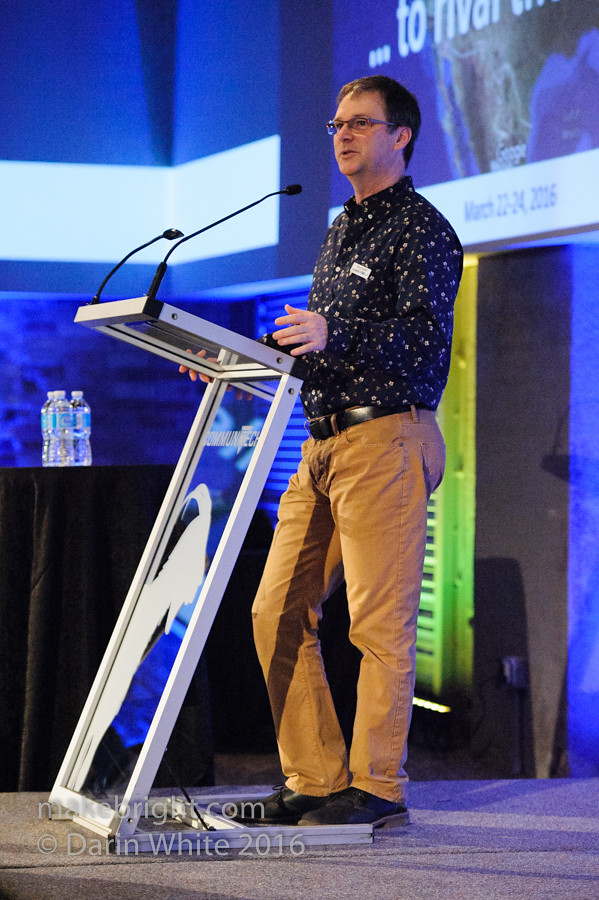 Mr. Steve Currie, VP Strategy at Communitech, introduced Barry and invited him to move to Canada. Depending on how the presidential race turns out, Barry suggested that wasn’t completely out of the question. 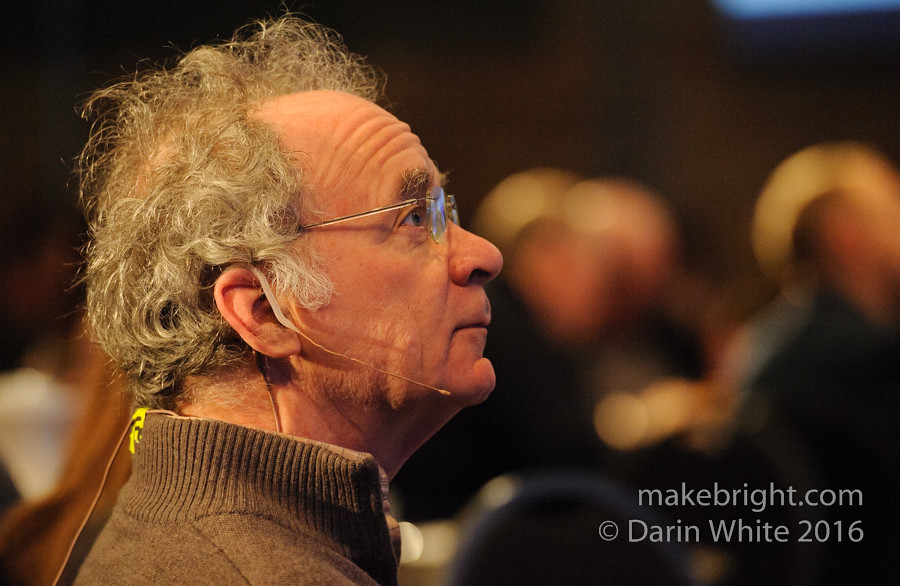 Pro-tip: this Barry Katz is not on Twitter. “I’m the wrong generation.” I’m sure the other Barry Katz got hammered pretty good with notifications this morning as the crowd warmed up social media. 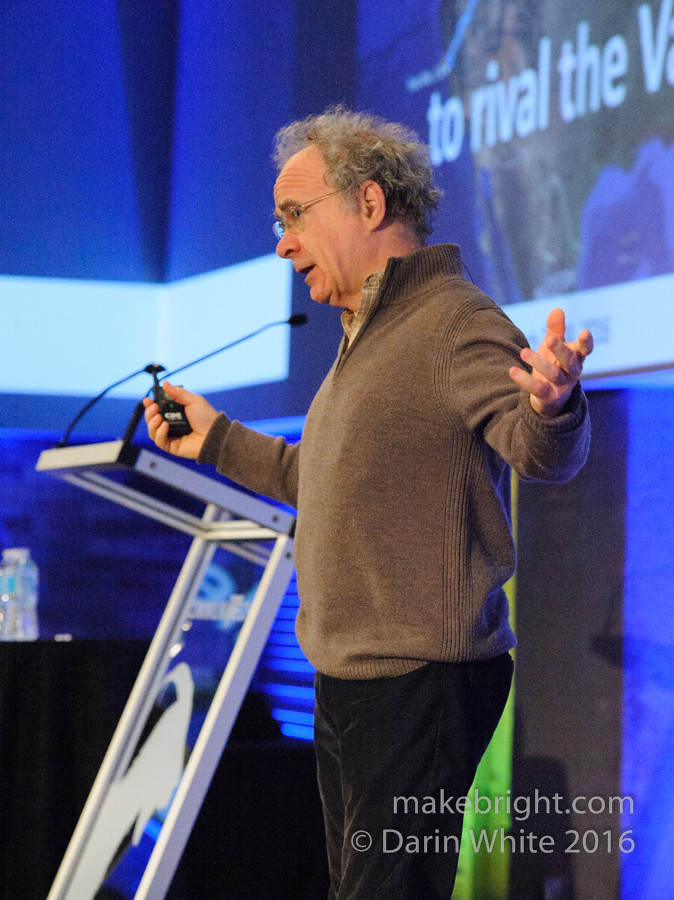 Terrific speaker, totally chill and a great sense of humour. 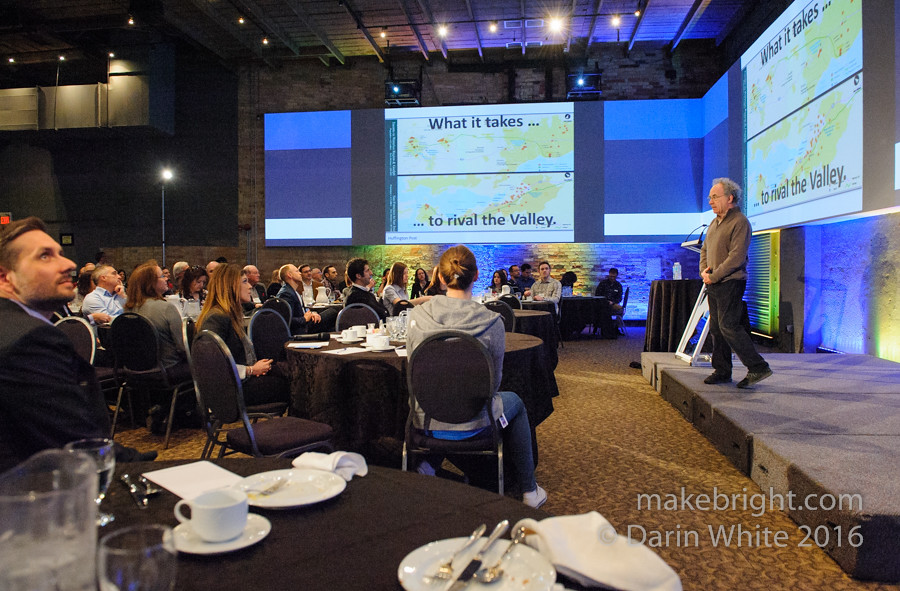 Lots of familiar faces in the crowd, including my friend Bryce Kraeker. Barry pulled up the Waterloo-Toronto and Silicon Valley comparison maps, observing that California had to be laid on its side. 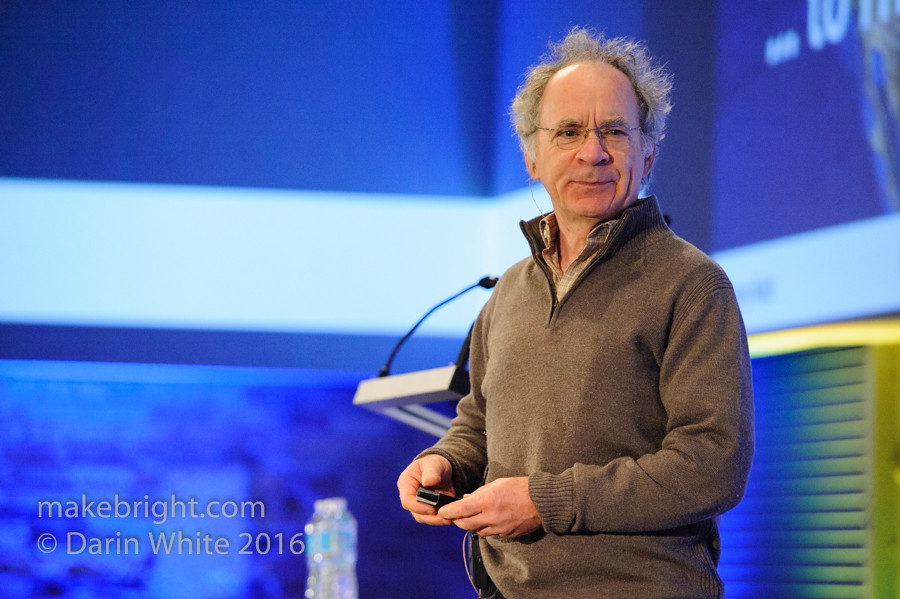 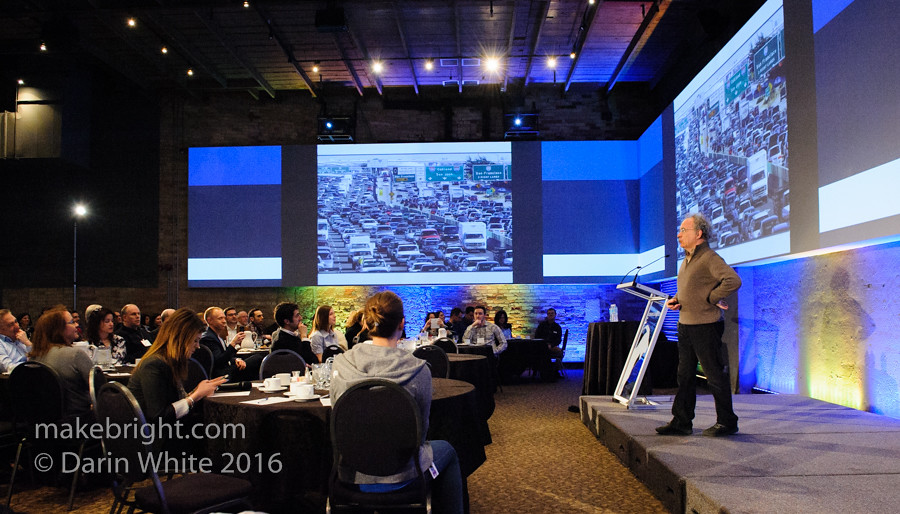 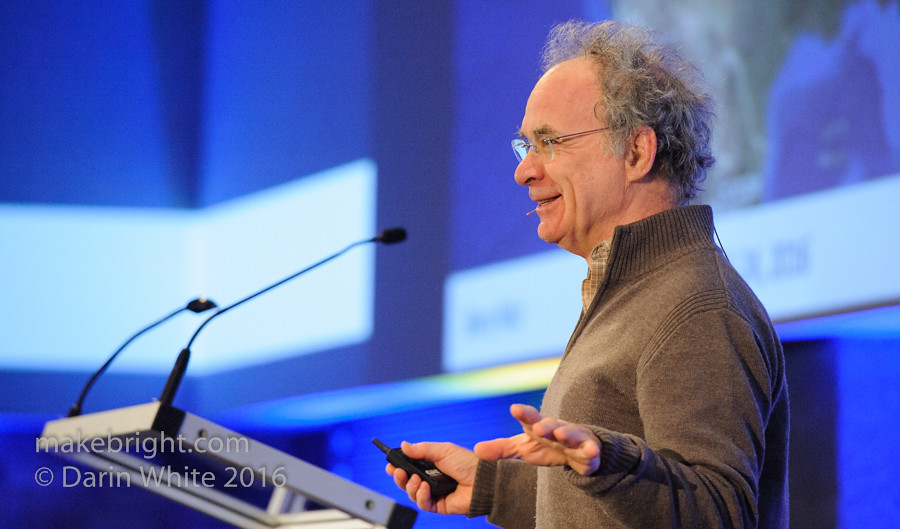 Looking at a map… 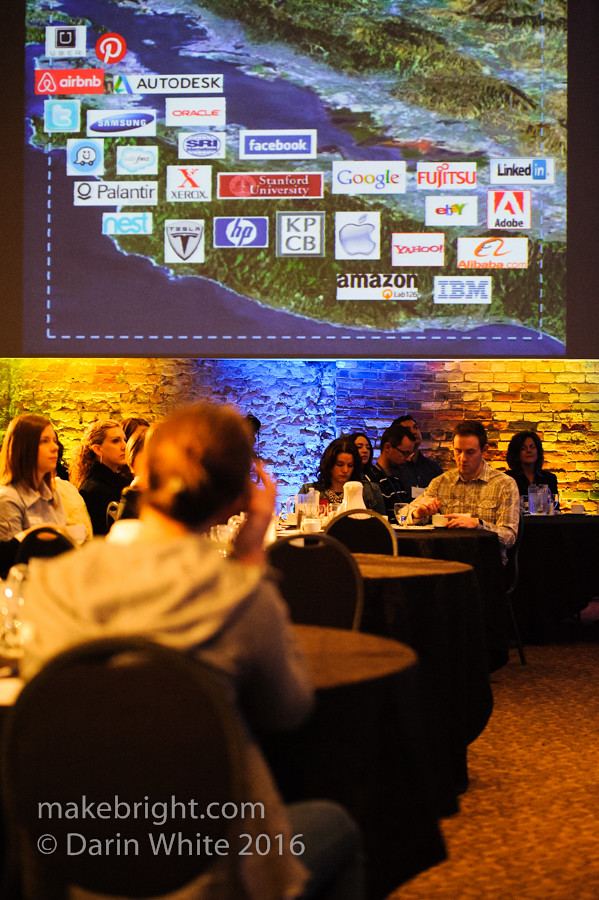 of the Bay Area (cue green laser pointer: “I live about here”), we took an instructive journey of the evolution of the Valley from orchards to Dave Packard’s garage and then on to the more familiar tech companies. 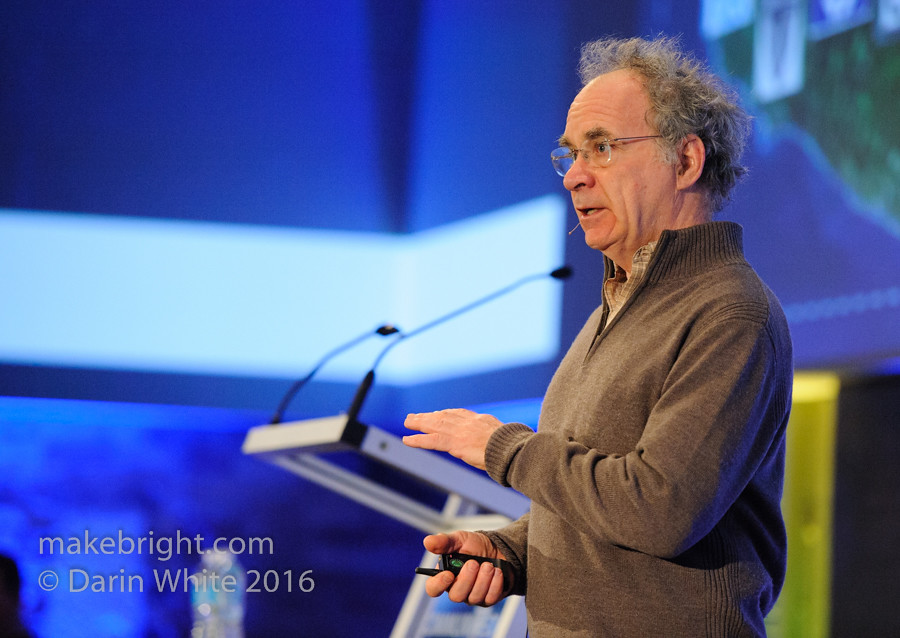 Barry also pointed out that… 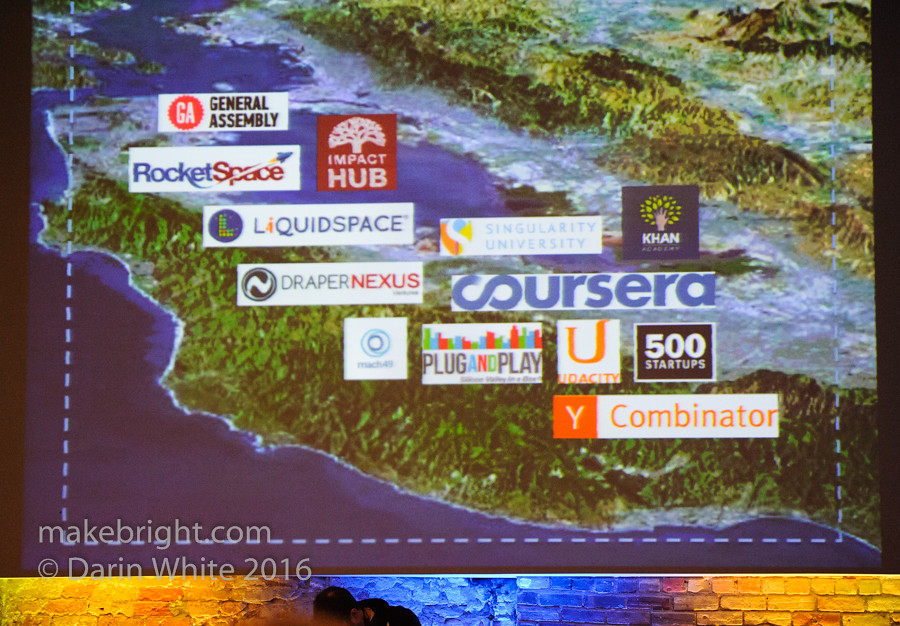 beyond the tech companies, and here’s the important part, there are cross-supporting constituents from a variety of domains. 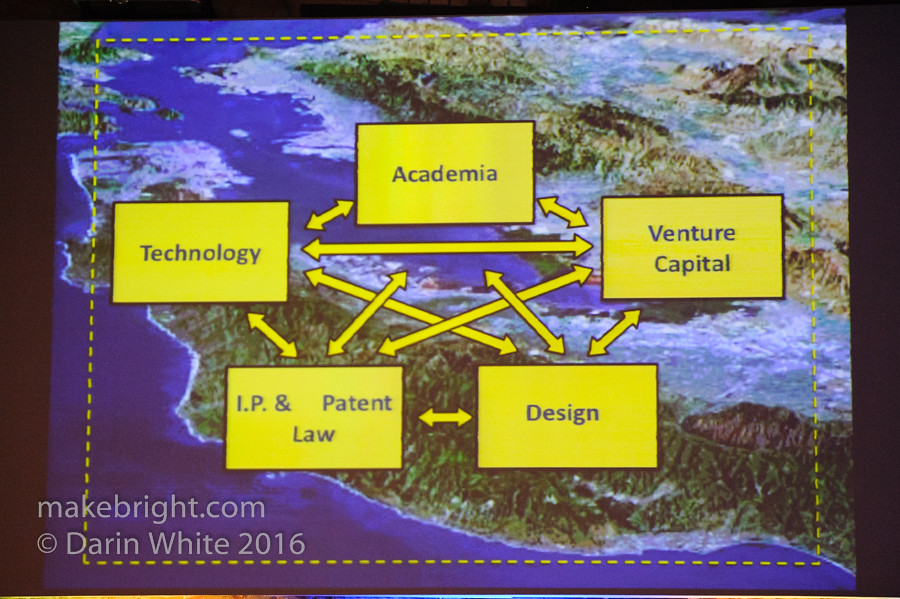 It looks like this. This necessary web of players and interconnects has developed over many decades in California. The thing for WR to note is that by comparison we’re quite a bit farther left on the timeline. We have these components to widely varying degrees and I reckon our work ahead is to grow them and more robustly hook ‘em up. 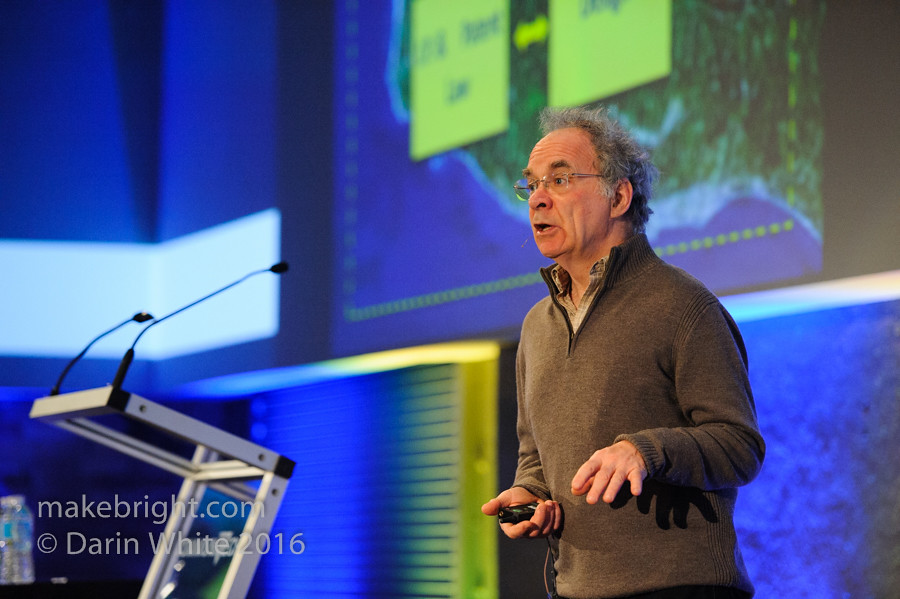 It was also instructive to look back at the roots… 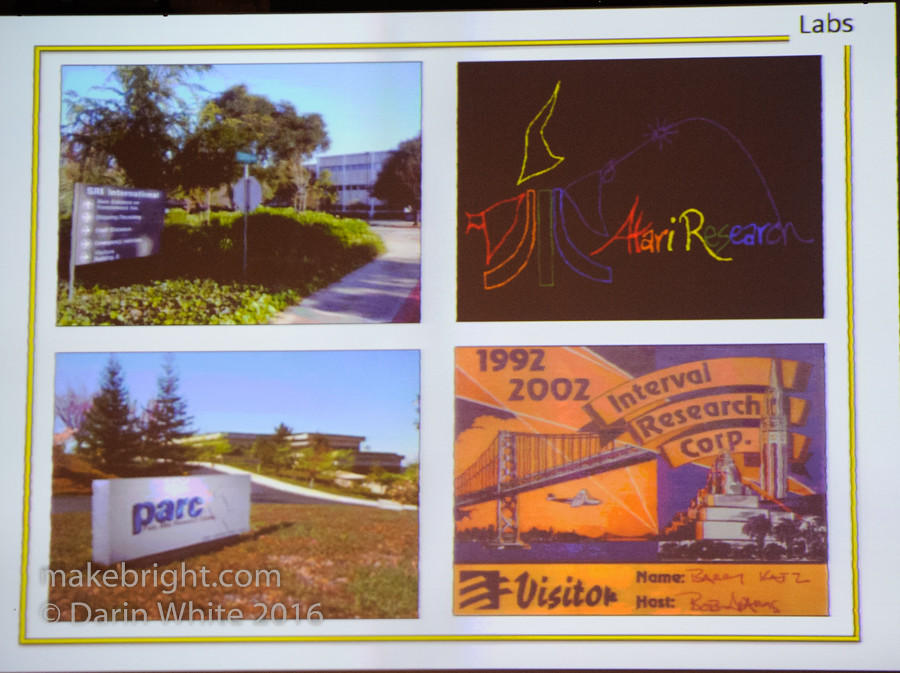 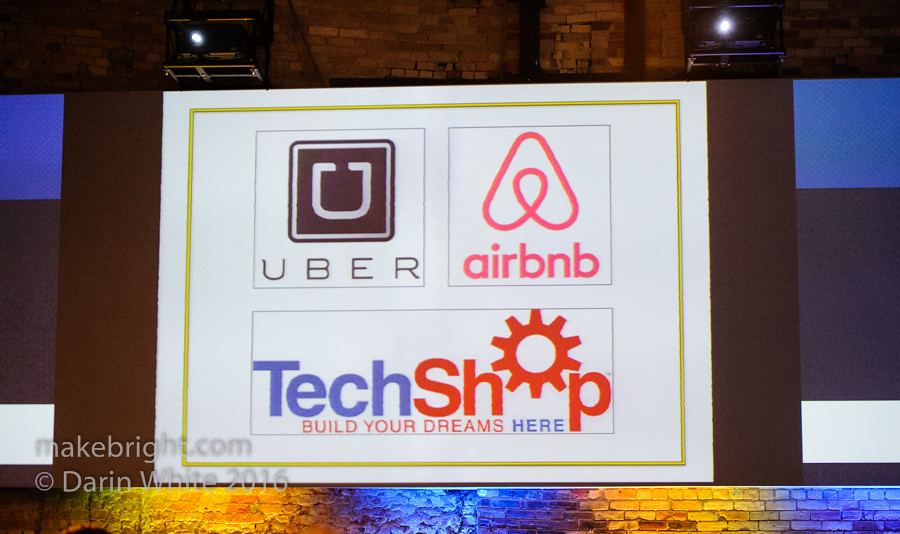 and to consider the future of nascent disrupters. 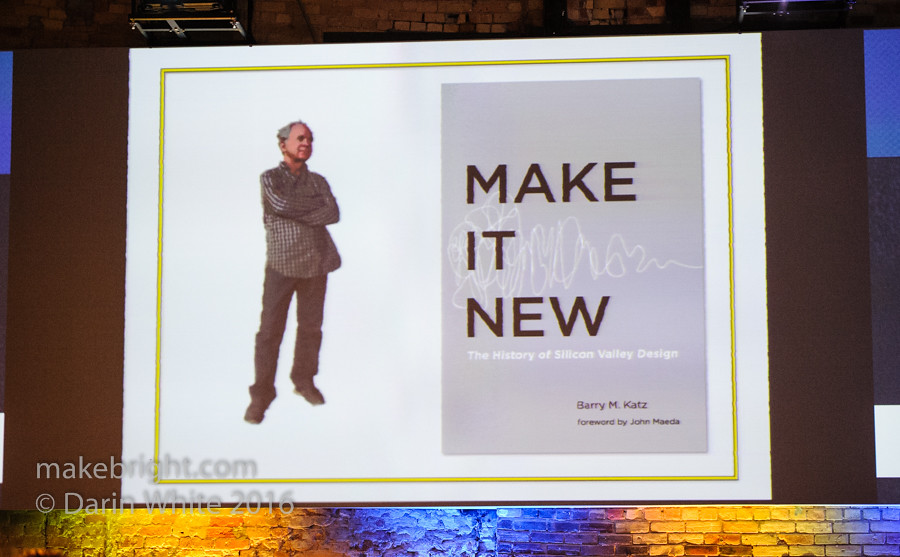 Barry wrapped up with words of encouragement for us and a photo of what he called his new “business card” which is actually a 3D scan and print of Barry himself (above) and that lives on the team shelf at IDEO. Speaking of new things, Barry joked that we could read more in his new book “[low voice] pick it up on-line for $29.99”. 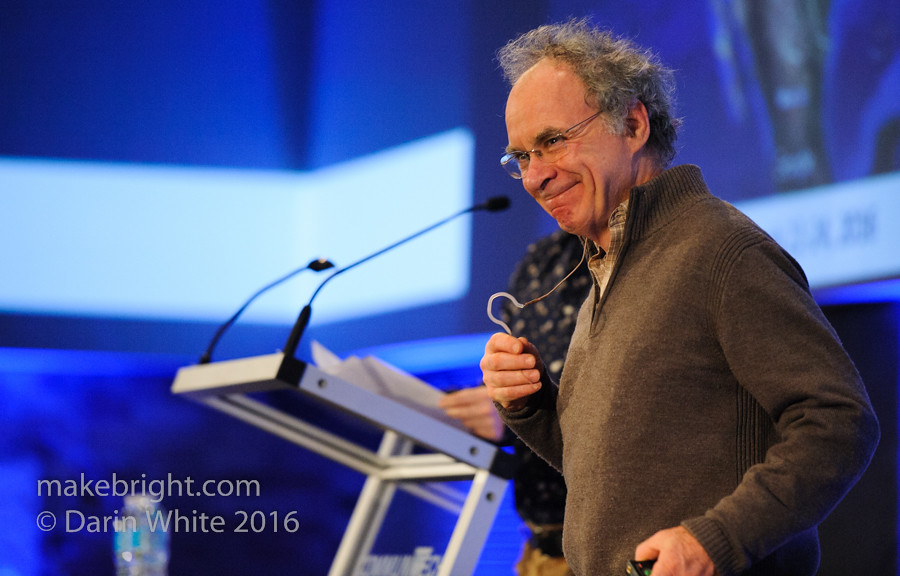 Thanks for coming to visit us, Barry Katz. Come around any time.

At Victoria and Charles, this is Kitchener.

This entry was posted in event and tagged Communitech, design, Kitchener. Bookmark the permalink.