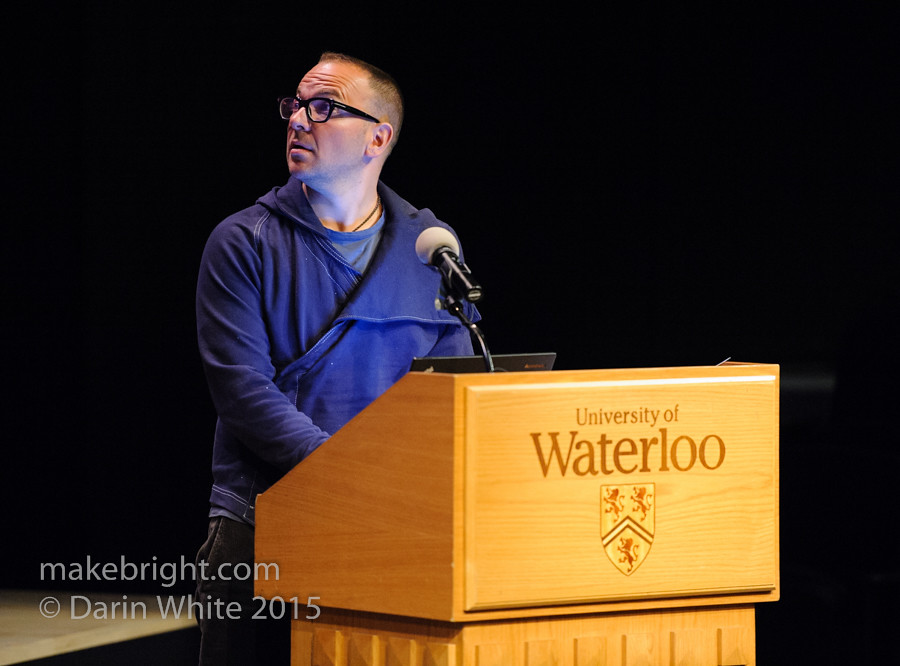 I first became aware of author/blogger/activist Cory Doctorow in the web comic xkcd some time in the previous decade. What a perfect way to learn about someone. I pulled on that thread which got me started reading (since lapsed) the blog Boing Boing where Doctorow writes along with Mark Frauenfelder et al. It really blew my hair back when Doctorow, walking his talk on sane copyright evolution, released his (then) next book on the net for free under Creative Commons with no DRM. I learned he had taken this approach from the beginning of his career. So I downloaded his book, and yeah, it was all there.

Doctorow dropped by UW on Friday night from his now-home in L.A. and I went to hear his talk. More on that in a moment, but first: if you like what you read here, please consider supporting this community-building work with your pocket change. I’m no book-writin’ author, but I’ve been putting out this work for you for six years for free. I’ve been operating under a vague notion that if I take care of the community, then the community will take care of me. That’s not yet covering the $300+/wk grocery bill, but it’s starting to work. My new Patreon supporters this week who decided to be awesome (as Jesse Brown says) are a hat-trick of J’s: Jon Johnson, James Bastow, John Collinson and my pal Agnes Niewiadomski. Big thanks! Ok, back to the story…

Honestly, my first simple-minded reason to attend this talk was “Holy shit, Doctorow is giving a free talk only 2km from my house.” Let’s call this the Famous Person Motive. Actually, the FPM is just the straw that kicks the camel loose from the corral. I’m less interested in fame and more interested in what someone has to say. In person. So, alone I went on a rainy fall Friday night fueled with optimism.

The meal-sized reason I went to this talk was because Doctorow is working on solutions to a phenomenon that is freaking me the hell out. Increasingly, you don’t own the stuff you buy, you’re renting it. Example: my Honda Accord has some woefully buggy software in it. It randomly dumps all my contacts, turns off Bluetooth and features a voice recognition system that apparently hasn’t improved since the early ‘90’s. N-number of service appointments and “software updates” later: same behaviour. And I can’t, as a maker, take control of this situation because
#1 I don’t have the source code for my car and
#2 there are intentional system locks in the car I paid for that prevent me from fixing my car and #3 there exists in many jurisdictions some nutty legislation that makes it criminal for me to even try to understand and share how my car works, let alone patch it. This is generally and somewhat euphemistically called Digital Rights Management or DRM. 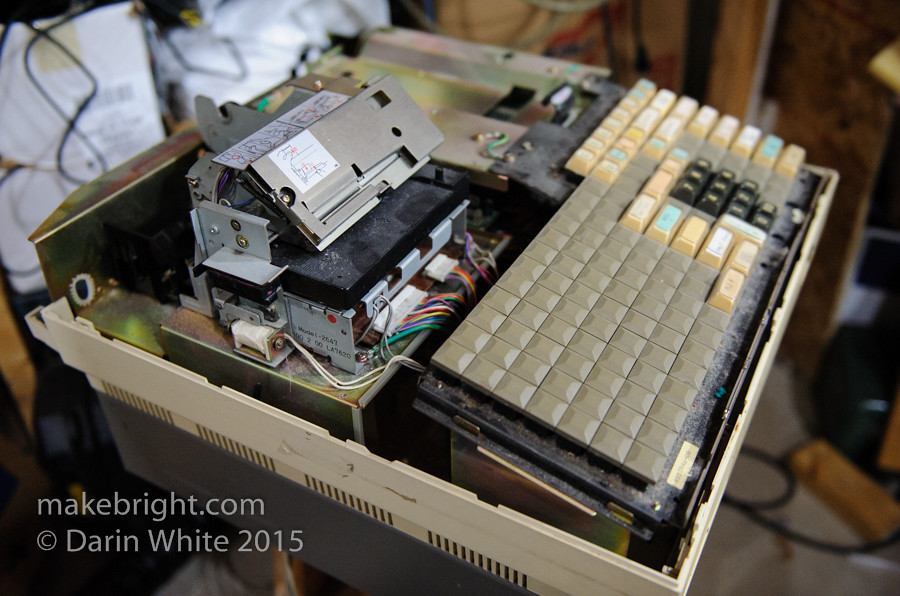 I’m increasingly sensing this disturbance in the make-o-sphere, the effect of which is putting a chilling damper on our ability to understand the world in which we live. We’re not legally allowed to understand how our electronics work. We may not refill cartridges for our inkjet printers. We may not fix our cars. The new business model is recurring revenue by shackling consumers to the corporate mothership under the pretense of offering them extra value and/or safety and under the threat of legal prosecution for going your own way. It’s whacked and it must change before we descend completely into maker atrophy.

The photo above of an electronics tear-down? That’s how I partied the night before this talk. I salvaged that 1980’s-era cash register from a local dumpster ten years ago (no smiling, TDL, and thanks for catching it as I pushed it over the wall from the inside). The kids loved playing with it when they were younger and now before it goes back into the river of e-waste, I want to salvage and repurpose two parts of this: the receipt printer and the vacuum fluorescent display. That requires the very skills and curiosity that are being snuffed out by this prevailing and ill-advised prohibition on tinkering (and I rarely use that word). Last year I reverse engineered some CNC machine shop tools at our local high school to reanimate them after a decade of stasis. The manufacturer had gone out of business leaving the tools like alien technology: looks cool, but how to make it go? There’s a lot of value in being capable and resourceful in this domain, not just at the individual and community level, but as a country. So here’s the bigger problem… 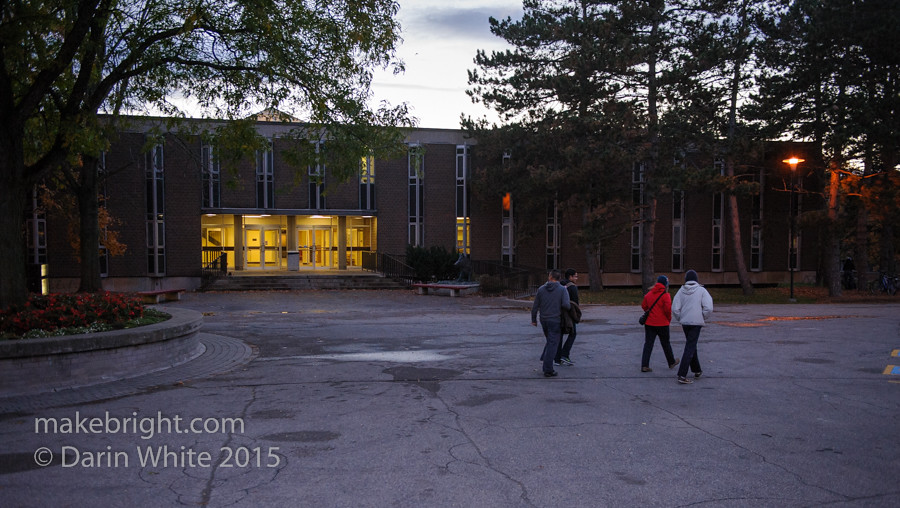 Let’s mash up (as we often do here) two stories into one. Maybe not a separate thread, but rather a broader context. Waterloo Region! Home of tech innovation and a lot of other cool stuff, right? Well, incumbent upon us as this tech powerhouse is the responsibility to look over the horizon and beyond quarterly investor calls and seed rounds and consider the broader long-term implications of DRM mechanisms and legislation.

Chilling effect: if you can’t modify, remake, repurpose your stuff, you won’t fully understand or own it. And we’re not learning. We incrementally get a little less capable with every additional restriction on these makerly gymnastics. And longer term, our ability as a nation to innovate withers as well. If Steve Wozniak hadn’t been able to screw around with electronics before Apple, you’d have no iPhone in your pocket. If Nikolai Tesla hadn’t been able to build freaky lightning generators, then we’d be limping along with Edison’s massively sub-optimal direct current approach to power distribution. 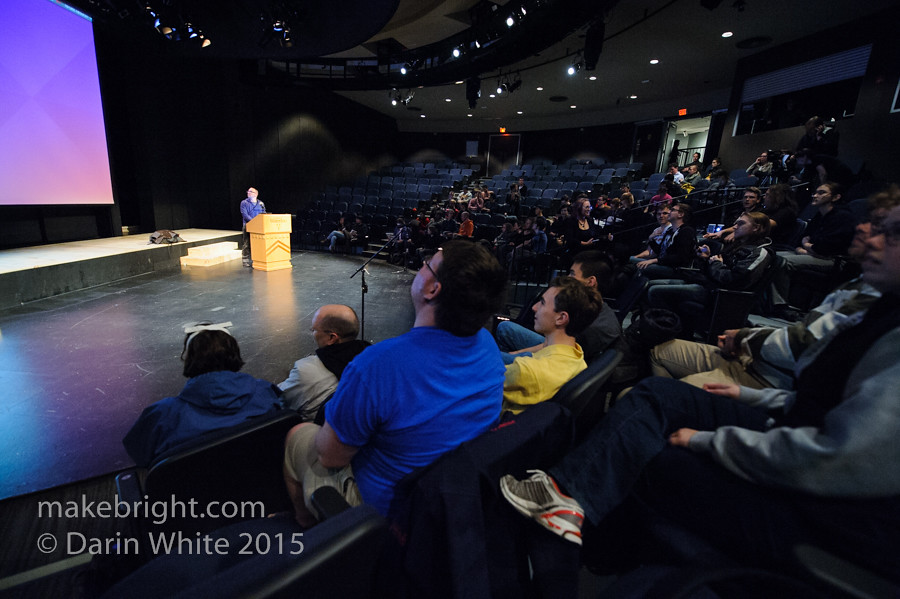 Twenty years from now, investors, where are you going to find the sharp young innovators in whom you want to invest? They weren’t allowed to tear apart their electronics; disallowed by DRM. So they chose a different career path. Same message for future corporate Canada seeking new hires. Same goes for our future teachers. Through a flukey application of already-broken copyright law conflated with the reality that lots of our stuff now has software built in, we’re facilitating a non-competitive economic landscape and stifling innovation.

The non-optional recurring revenue model (where, say, only Xmark brandname ink cartridges work in the printer, not cheaper generic ones) seems awesome for vendors in the short term. Regular revenue, customers locked in, competition locked out, all lawyered up. But just like eating marshmallows, things don’t work out well on a longer timeline. 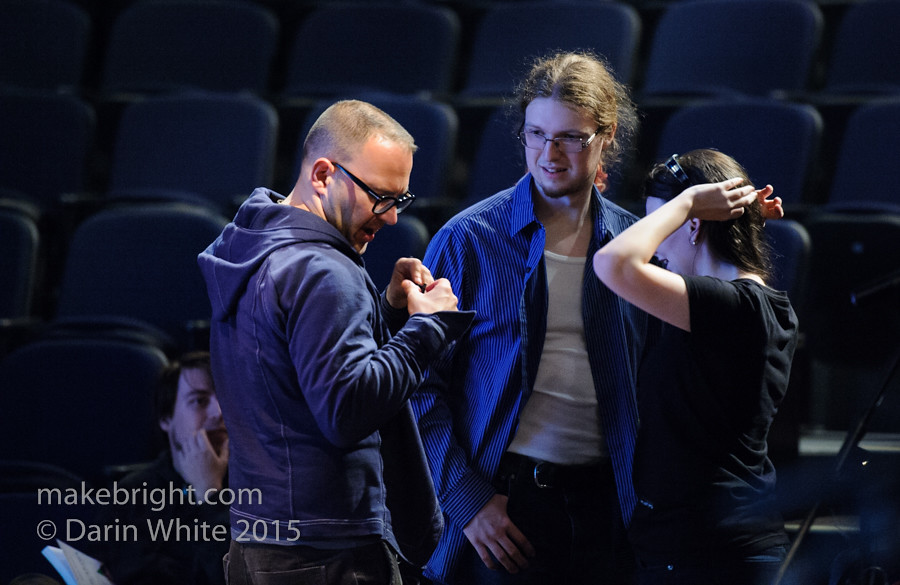 Overdue: thanks to UW’s Computer Science Club for setting up this talk. That’s Theo Belaire (centre) from CSC who later very concisely introduced the talk. 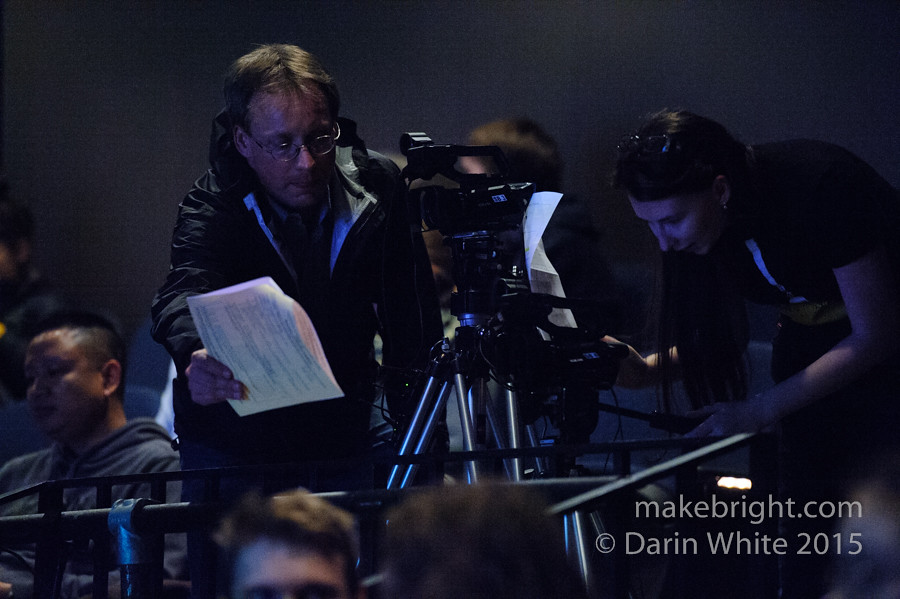 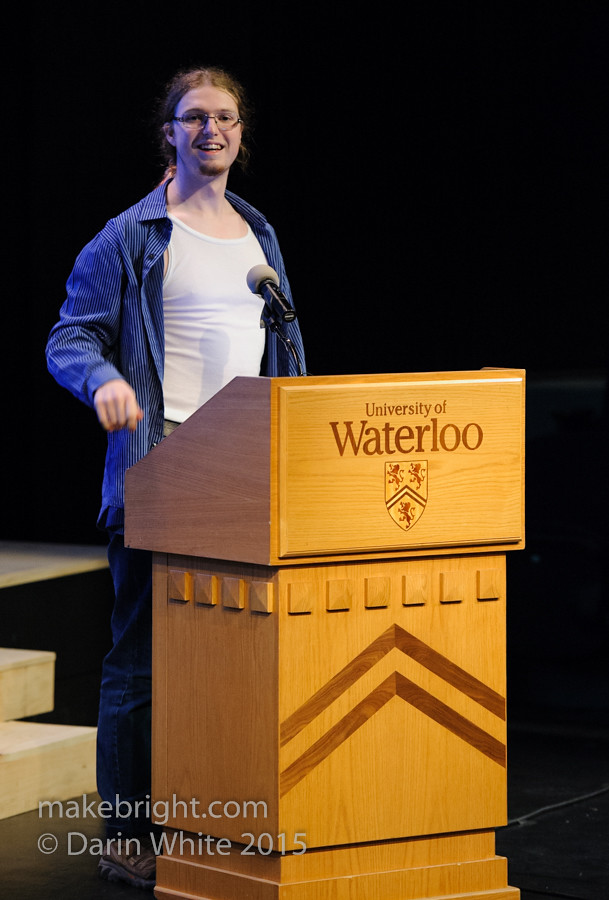 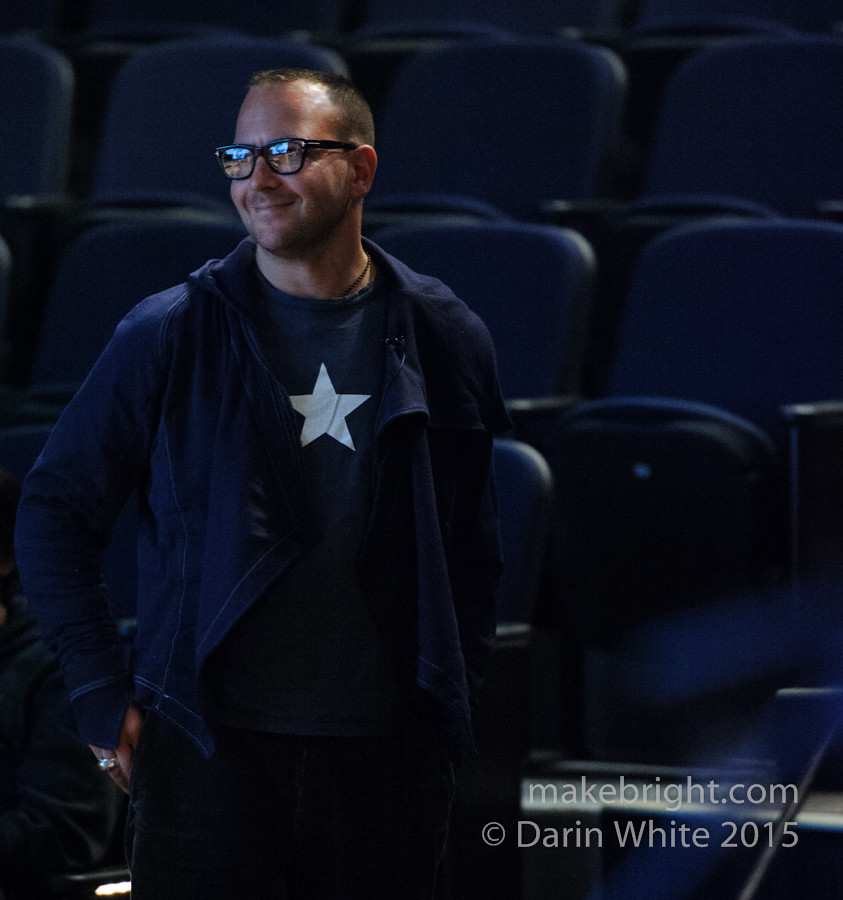 Doctorow was born in TO, lived in London, now based in L.A. He’s been hooked up with the Electronic Frontier Foundation “defending your rights in the digital world”. He’s done teaching stints at UW, USC and other institutions. He’s written a whack of sci fi books and he weathers some criticism that he operates as a shameless self-promoter, to which I personally respond: how the hell else would you make a living doing this? 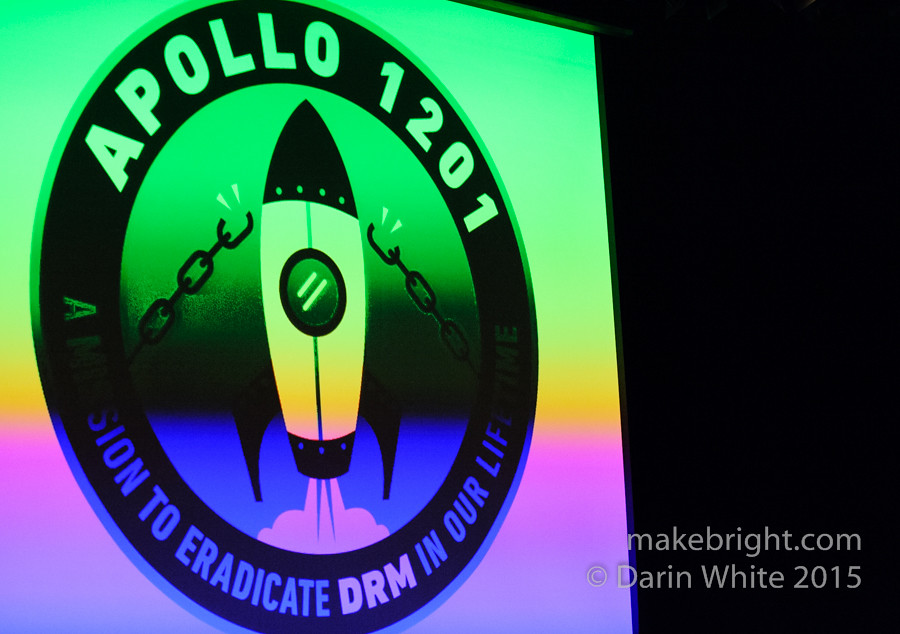 The talk was in large part a primer about the problem space and a bit light on solutions and constructive efforts. For new readers, I worked in product security at BlackBerry for 9 years, so I’m predisposed to sort of follow this stuff in the news. I might also have a more moderate view or at least some experience both on the corporate side and at street level.

The Digital Millennium Copyright Act, signed into US law by the Clinton administration in 1998, was a substantial inflection point in this whole discussion. It is a textbook example of the effectiveness of powerful lobby groups to orchestrate profit advantage and have the consumer foot the bill. The DMCA “criminalizes production and dissemination of technology, devices, or services intended to circumvent measures (commonly known as digital rights management or DRM) that control access to copyrighted works.” Ostensibly the legislation protects a corporation’s R&D investment and intellectual property value in a product. The EFF project “Apollo 1201” (above) references DMCA section 1201 that deals with circumvention of locks, tools for circumvention, and even talking about circumvention. This project aims to “eradicate DRM in our lifetime”.

So let’s say your company makes a coffee maker and it includes software to run the machine and requires little individual pods of coffee for brewing. This turns out to be so lucrative, selling coffee for $50/lbs instead of $12, that competitors introduce way cheaper coffee pods. You decide to implement measures in your next coffee maker so only your high-priced coffee pods work. More profit? For Keurig it turned into a revolt and then capitulation to consumer outrage. I guess there is in fact a limit beyond which customers will not be led. 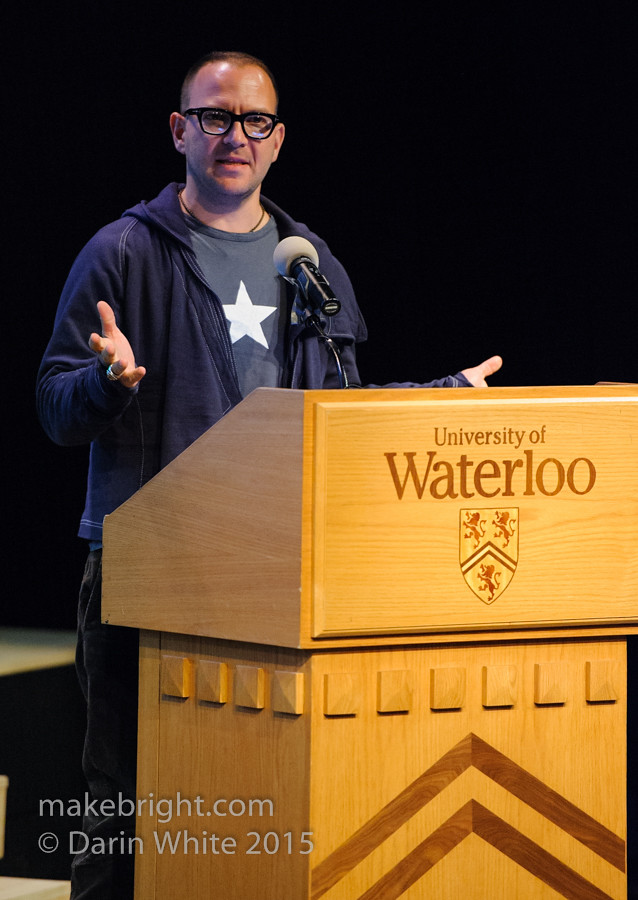 There were many examples discussed and you can check some out on a post by the EFF on the consequences of the DMCA. Of course Doctorow mentioned the recent case of Volkswagen and their emissions-test-cheating software. Researchers might have discovered that problem years earlier but access to the software in those diesel cars was prevented by… you guessed it: the DMCA.

New to me was a story around the tractor manufacturer John Deere. Doctorow suggested the company locked farmers out of repairing their own tractors via software locks similar to the automotive industry. He said this preserves the lucrative dealer repair business, but then went on to describe a situation that was more unsettling and which came to light when the keepers of the DMCA were petitioned for an exception for tractor repair. Doctorow said the manufacturer didn’t want owners overriding/disabling (defective) sensors in their tractor because those sensors capture very granular data on soil density tied to GPS coordinates. That data is opaquely harvested (ahem) by the tractor and backhauled up to the corporate mothership. If the farmer wants access to this data on his own field, collected by his own tractor, he must buy seed from John Deere preferred suppliers. The density data enables maximally effective broadcasting of seed. Doctorow noted this had the ancillary benefit of giving the manufacturer a large data set across a broad geographic regions. I’m still googling trying find out more about that little wrinkle. 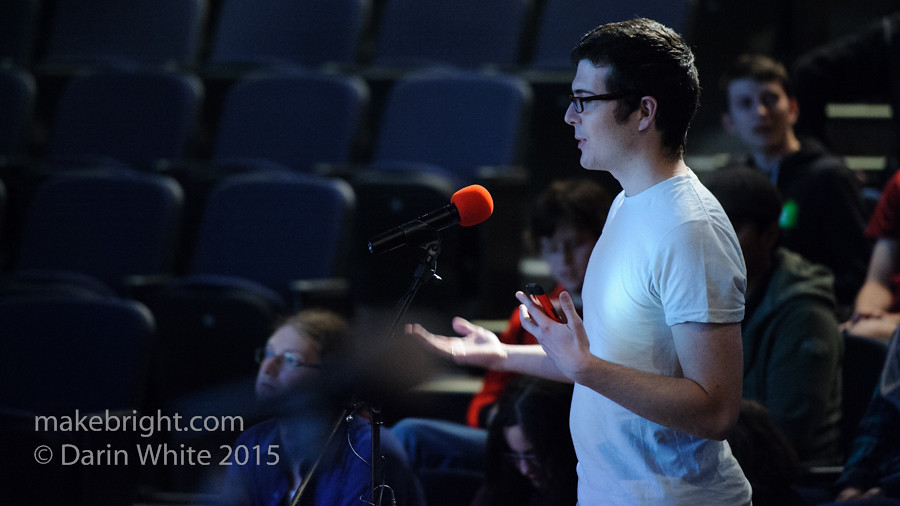 A few questions from the audience. Doctorow asked that at least every other question be asked by someone ((who didn’t self-identify as male) or (who considered themselves non-binary)). I had to parse that for a few minutes and missed my chance to ask for his thoughts on the Open Source Hardware movement with respect to DRM. 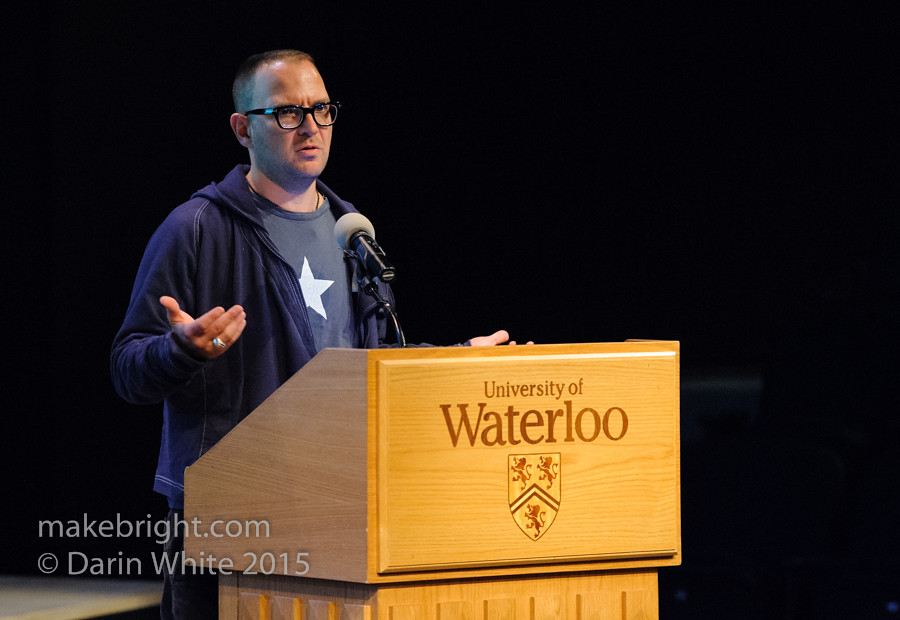 He left us with three requests: #1 Help kill the Trans-Pacific Partnership. #2 Start a local EFF chapter. #3 Carve off some of your beer/iPhone/data plan money every month to support DMCA reform/repeal. Ah, he also noted that in Canada our relevant legislation under Bill C-11 isn’t great either. 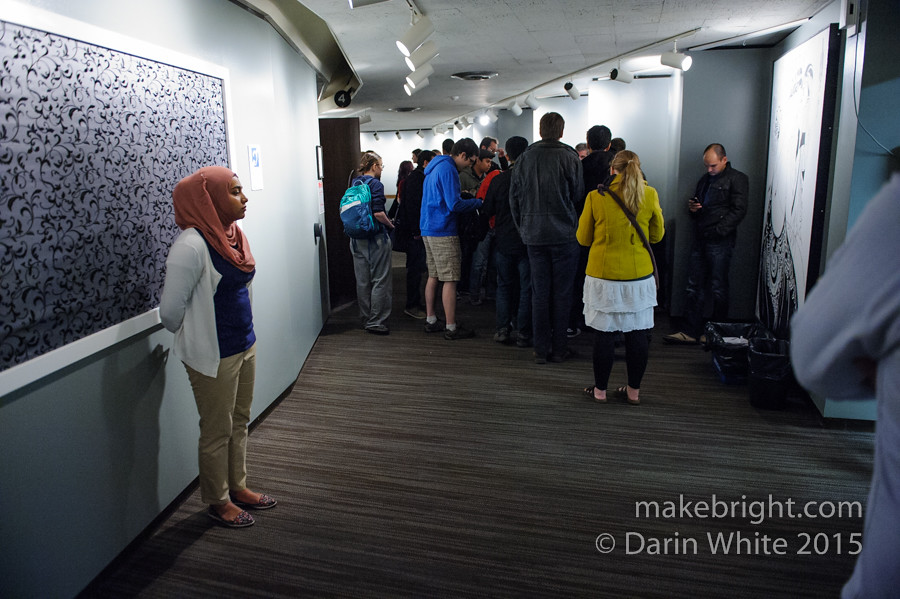 Then on to the book sales and signings. 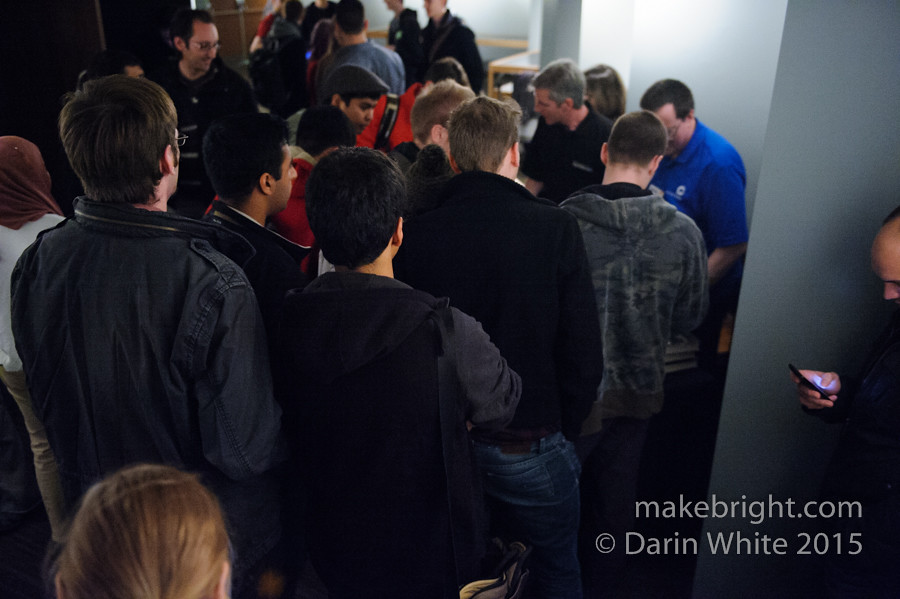 Nice to see newlyweds Darcy Casselman and Ellen. Saw Ben Grossman and his whole posse. Stephen Paul Weber was down in front and Tessa Alexanian got a question in. 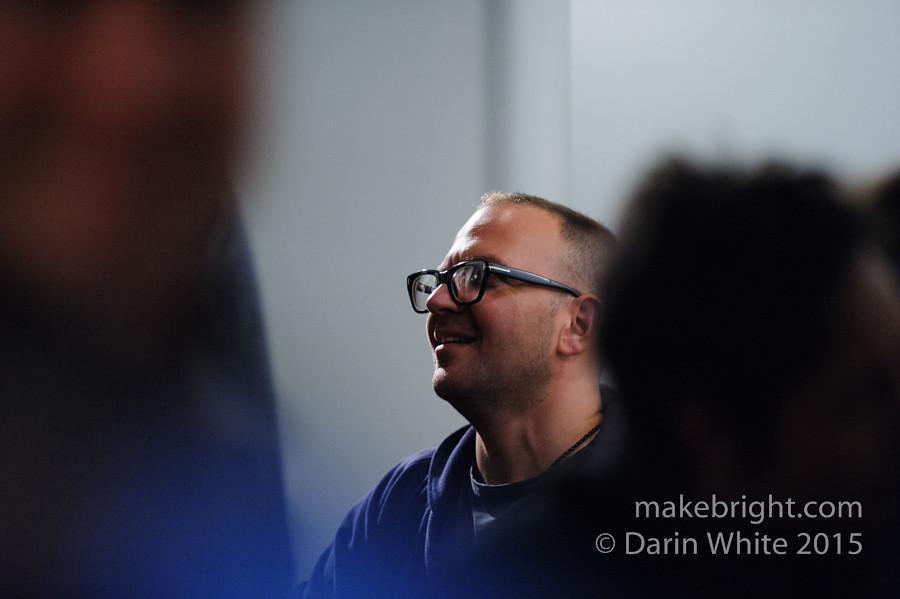 I’m getting on this thing where I photograph people framed by other people. Maybe it’s just called “necessity”. 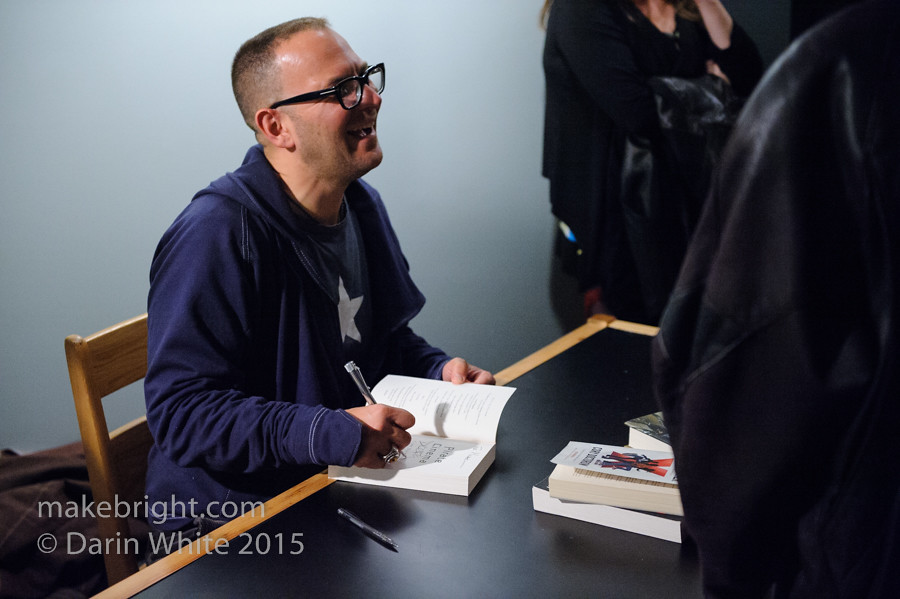 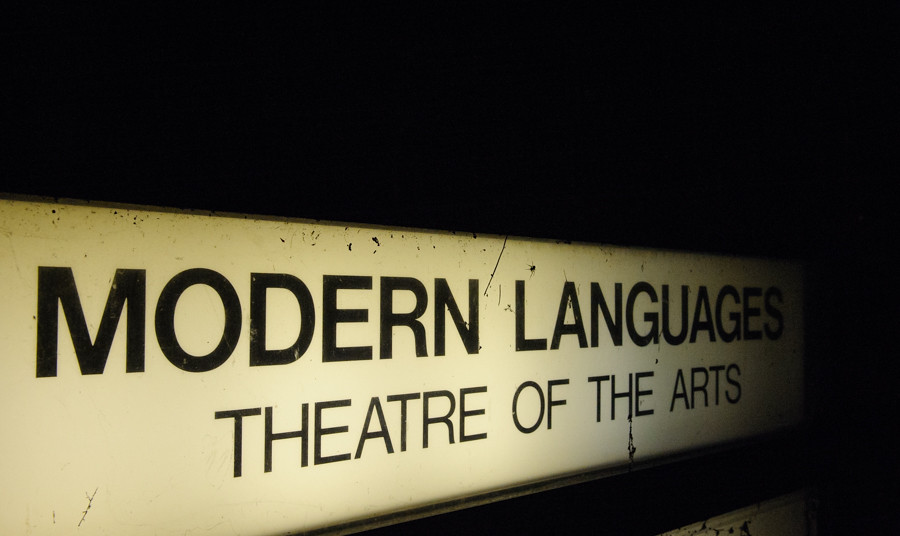 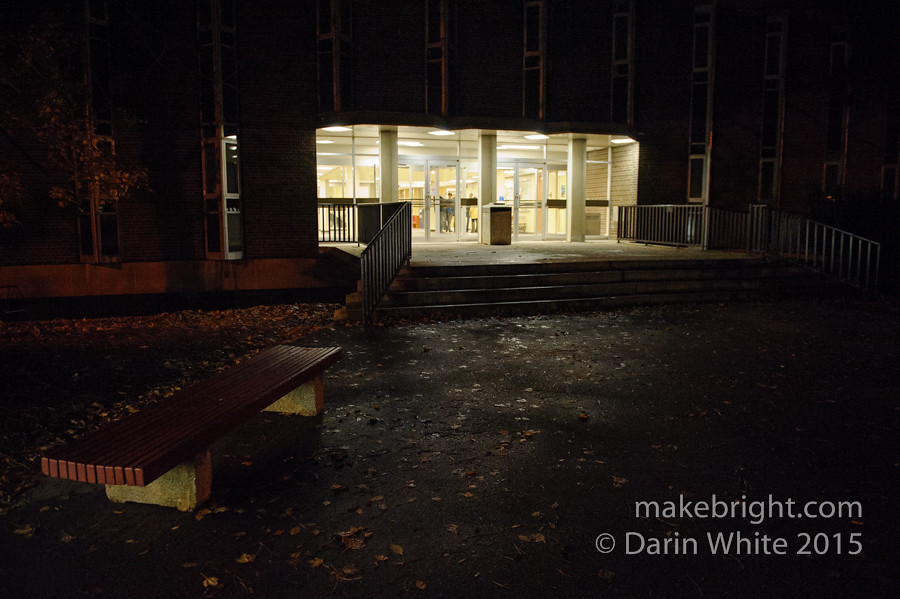 the night with me. I’m super-glad more people are talking about this stuff. I’m old enough that I remember when you bought something you just owned it outright and did whatever you pleased with it. No Terms Of Use click-wrap. No functionality locks. If it broke, fix it. Our current state itself is fixable because unreasonable profiteering relies in large part on apathy. Makers need to speak up and then show up. 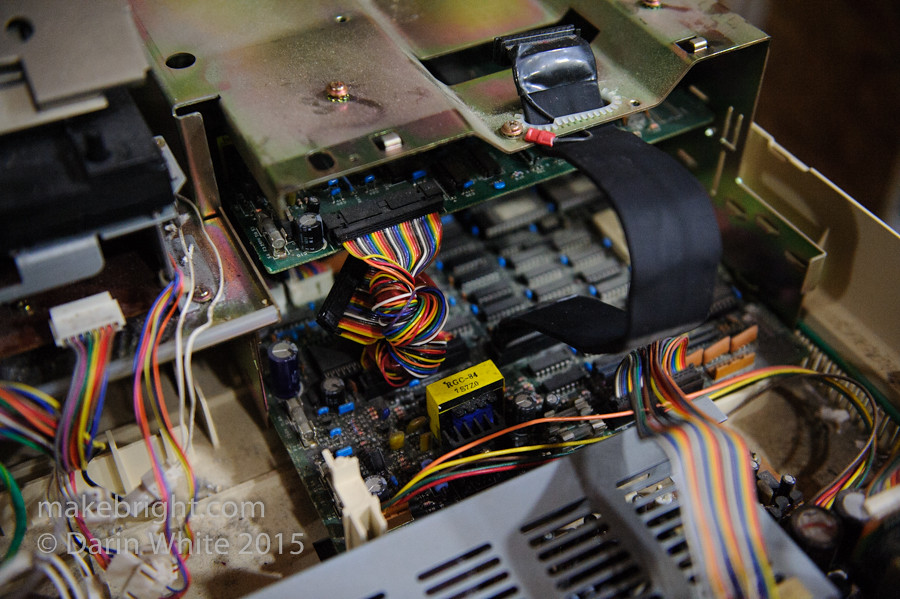 Meanwhile, I’ll be in the lab looking up datasheets and trying to find the high-voltage sinks for the currently broken VFD in this rig.

On the west side, this is Waterloo.

This entry was posted in event and tagged makeosphere, UW, waterloo. Bookmark the permalink.