FLASH—making the photography event we want to see 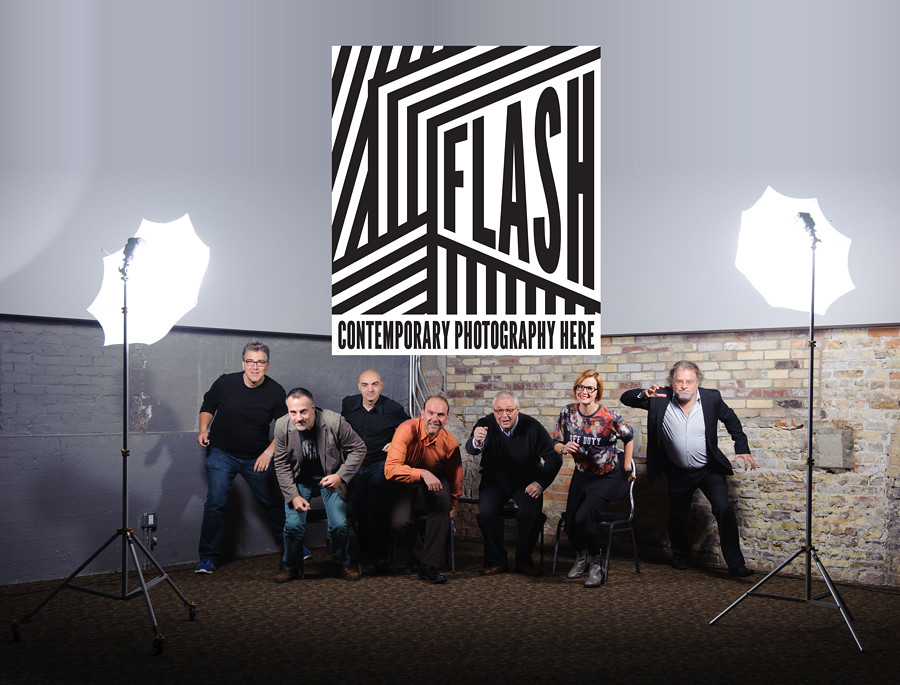 After months of my obscure references here to a photography event here in Waterloo Region, I’m happy to take the wraps off the FLASH photography happening, coming January 23, 2015. This gig is going to kick ass, so before you read any further go get your tickets before they sell out.

The TL;DR:
• headliner is two-time Pulitzer Prize winning photog Barbara Davidson
• three featured photogs will be showing work
• open call to amateur photogs to submit their best shot to the curators panel for the show
• all content creators showing work get paid CARFAC rates
• please, push the flashwr.ca link to your friends on all channels and then show up

Above are the people I’ve been hanging out with to work on this show. L-to-R: Me (DW), Tony Reinhart (Communitech), George Tsintzouras, Charles Fraresso (Christie), Gordon Hatt (CAFKA), Catherine Bischoff, Mark Walton (Foto:RE).

There’s a lot of well-articulated thought on the FLASH site, but let me say it simply here: I feel like we’re making the photography event we ourselves want to see. Top-notch talent and content, on killer projection tech from Christie, in a great venue at The Tannery, conceived and supported by a mash-up of different groups. Made right here in Waterloo Region. 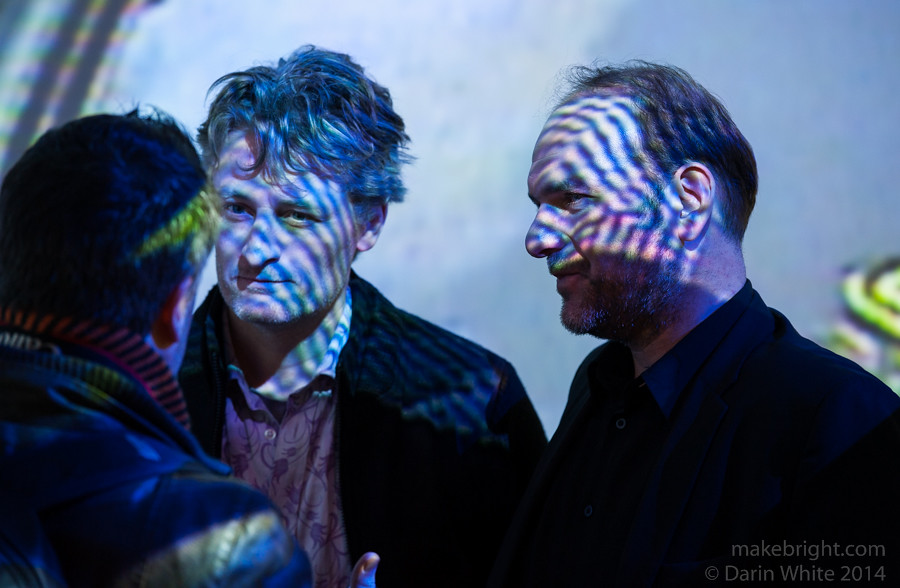 Way back in March, I was shooting an awesome installation at Kitchener Studio Project by my friend Pascal Dufaux. He was here from Montreal on a Christie artist-in-residence gig. Above, Tony Reinhart (turned away) is interviewing Pascal and Charles Fraresso (Christie). At the reception for this show, Tony and I were talking about how sweet it would be to repurpose some of these projectors for a photo show. He said Charles had mentioned that new hi-res projectors had recently been installed in the Tannery Event Centre and that venue would be perfect. So we pulled Gordon Hatt (CAFKA) into that stand-up conversation along with Catherine Bischoff, and so what later became FLASH was conceived. 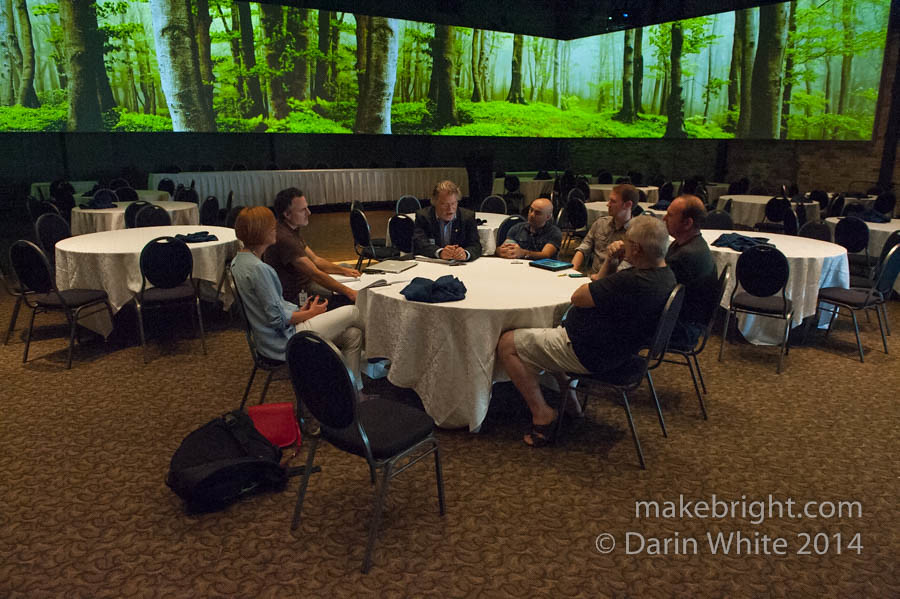 Schedules conflicted and summer happened, but we finally got around a table in August to start sorting out exactly what we wanted to do. If this crowd looks weary, it’s probably from hearing me say repeatedly that we must pay all content creators. If the work has enough value to be in the show, we need to recognize that by paying some amount for rental of the content. Agreement! 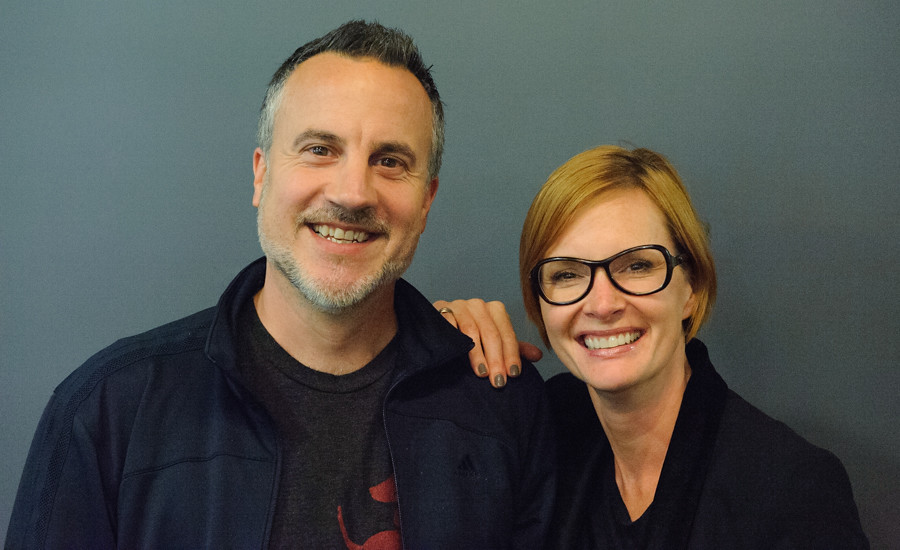 Meetings continued into the fall. A quick hallway shot of organizers Tony Reinhart and Catherine Bischoff shows them pretty happy. 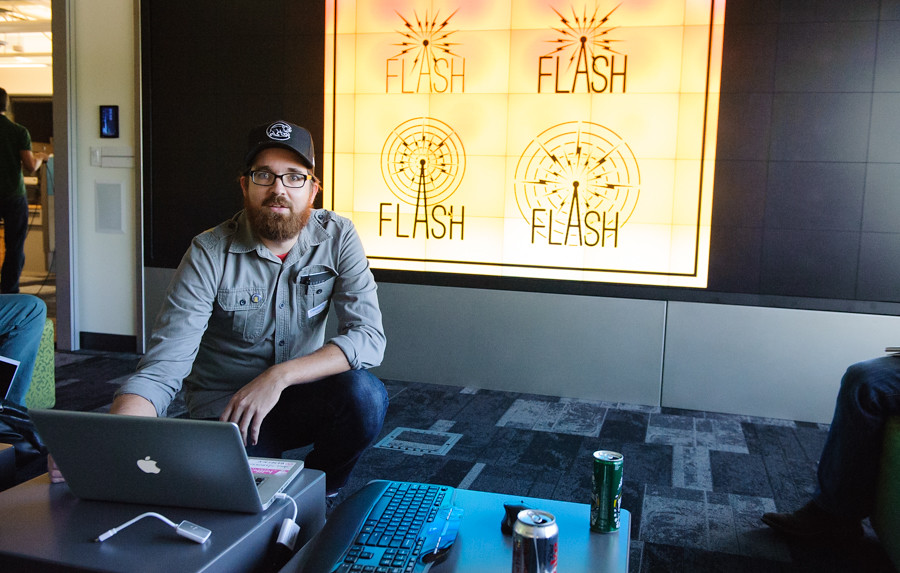 “We need a visual identity. Anybody know any designers?” Before anyone could speak, I shouted out “Jon Johnson!” who I profiled only a few weeks prior. Here’s Jon showing us some options during a meeting at Christie. He came up with… 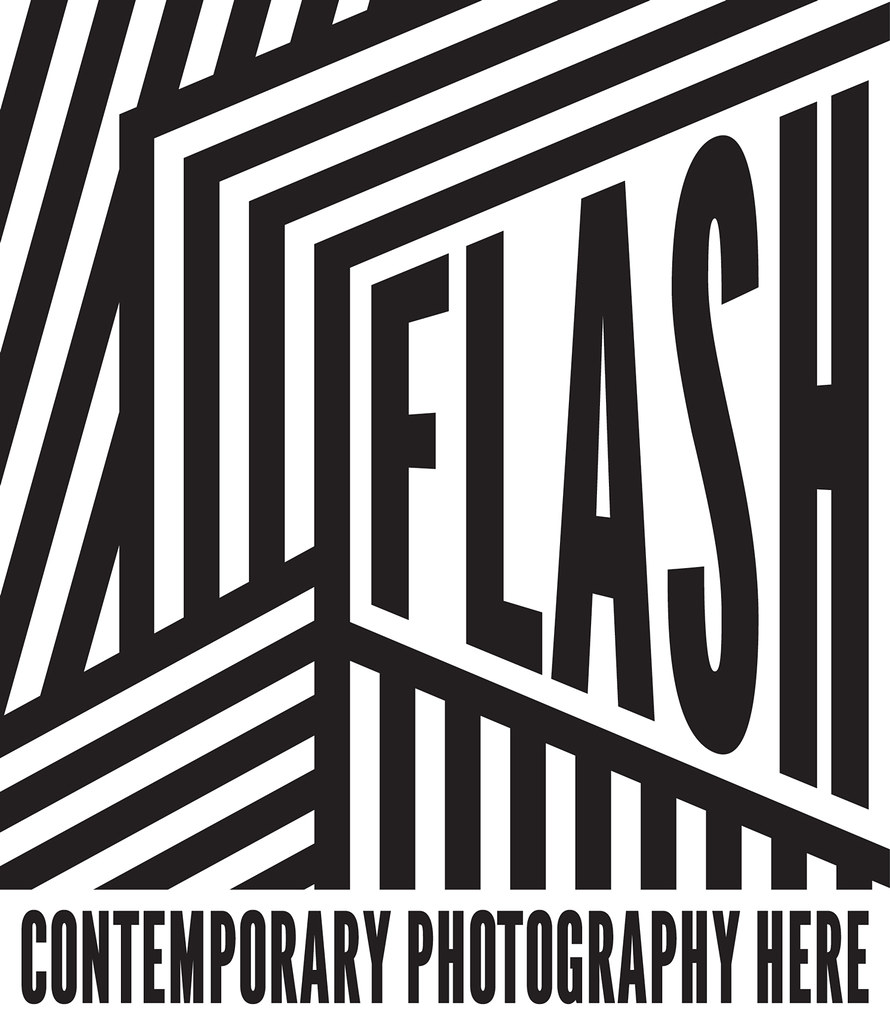 this wicked visual that we chose unanimously from the bunch. Jon is such a talented and chill guy with whom to work. 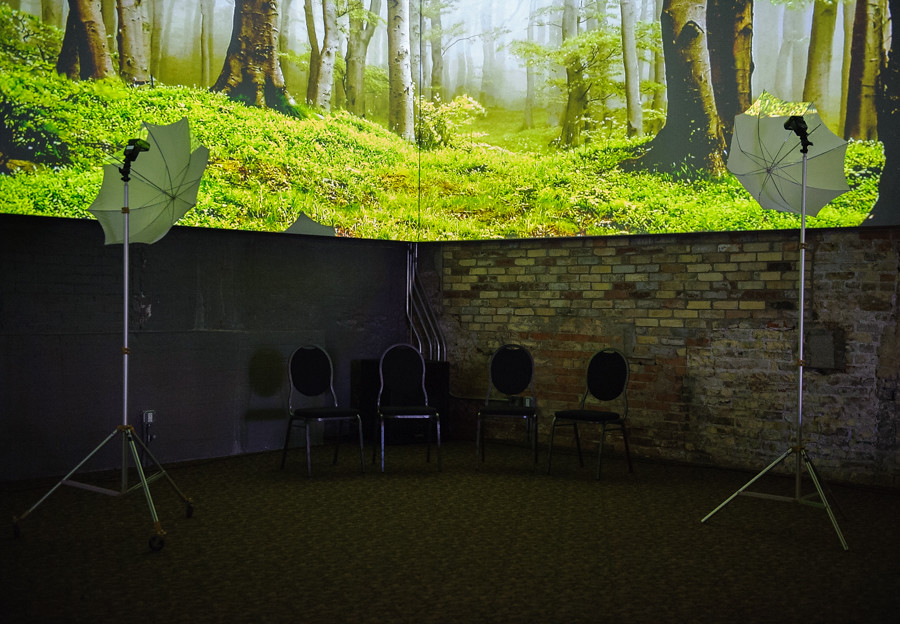 I was doing some shoots for the ever-awesome Kitchener BIA and their new downtown mag OWN IT, and had an opportunity to include a piece on FLASH. High five! Here’s the setup I rigged to shoot the group after one of our meetings. Ceci n’est pas une forêt. Rather, it’s the wrap-around… 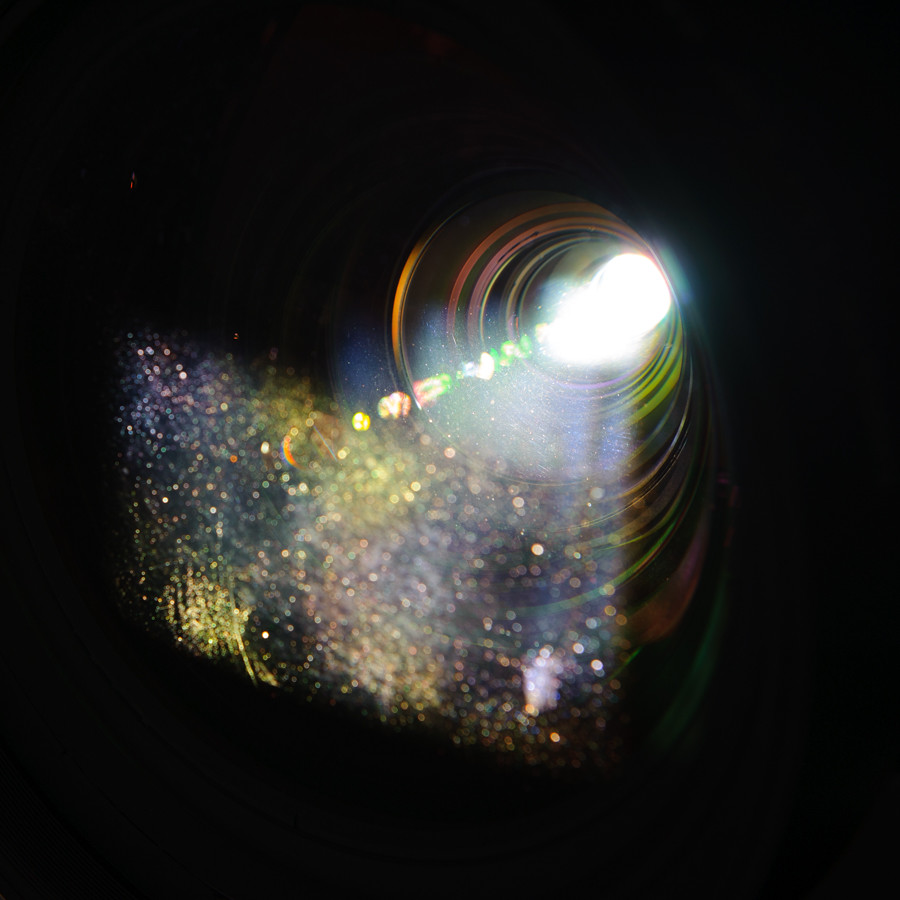 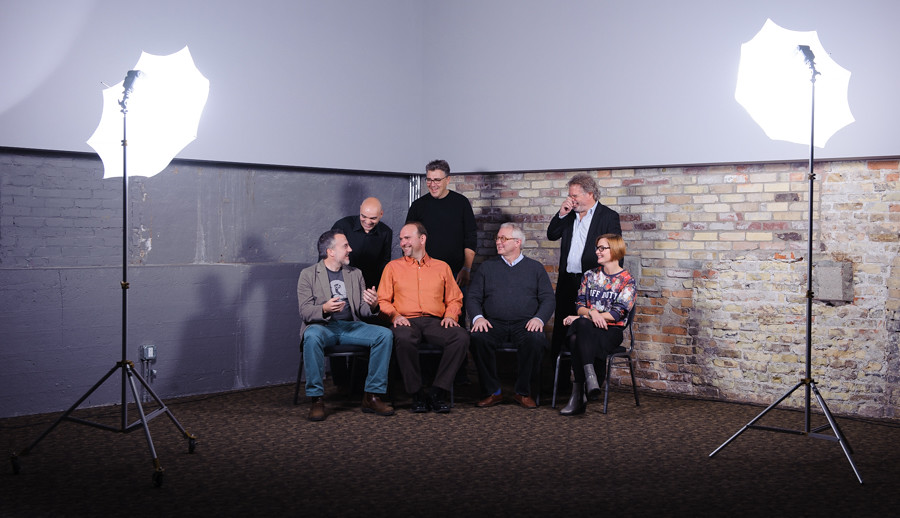 We were all laughing after I shot the first group photo and I was moving us on to the next pose and Tony said “Don’t you want to take another?” as a safety shot. Me: no, I’m a photographer, it’s perfect. Cue the laughs. Great group to work with on this project.

Contribute. Show up. See. Gonna be a great show.

This is Waterloo Region.

This entry was posted in event, photography and tagged FLASH, Kitchener, photography. Bookmark the permalink.