Heads-up for the Premier 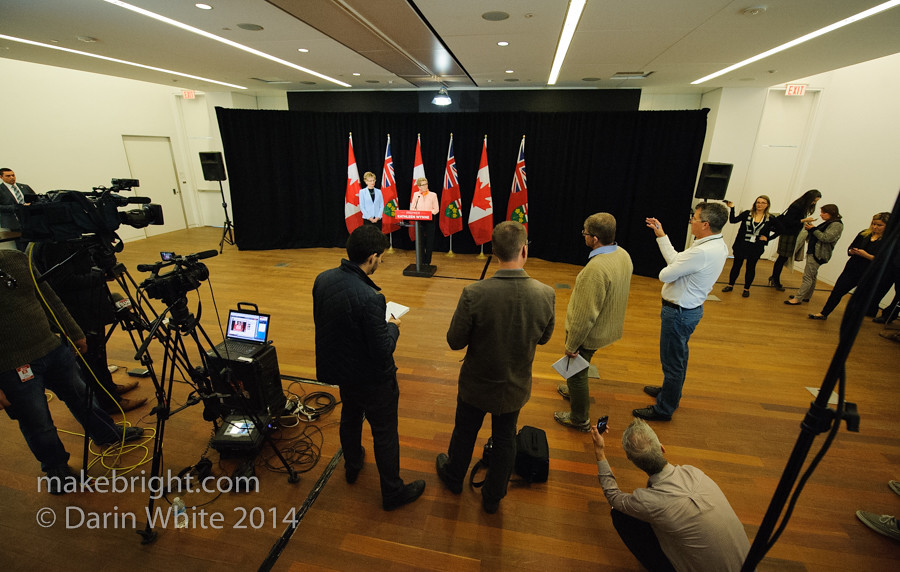 “Heads-up for the Premier” was the quintessentially Canadian phrase I heard from the hallway right before Premier Kathleen Wynne walked into the scrum set up at CIGI on Friday. I was shooting the CityAge conference and just tagged along to the scrum after the Premier addressed conference attendees. Regular readers know I am fascinated by the meta level of media capture, leading me to frequently shoot photographers shooting something else. This scrum was no exception. 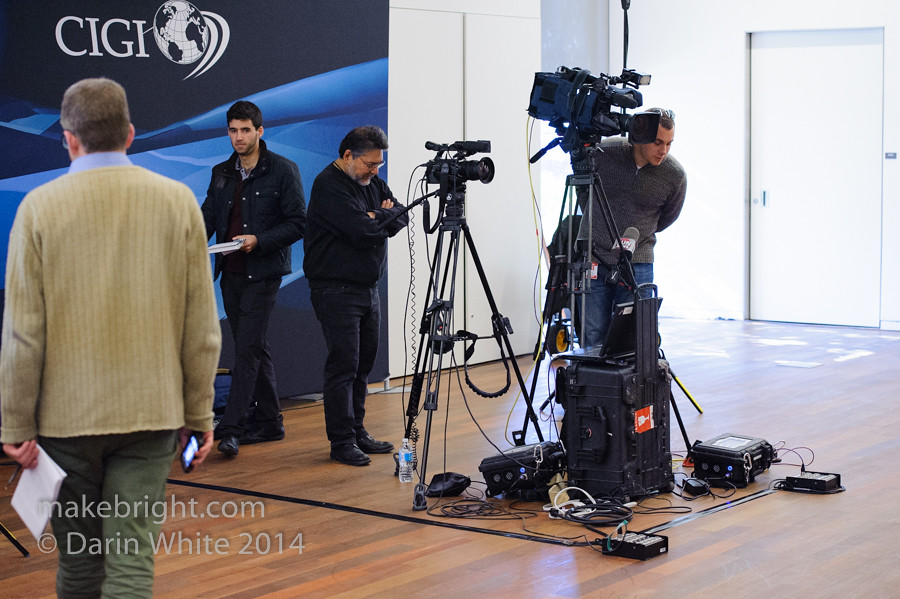 Photographers, journalists, technicians were chilling out for about 20 minutes waiting for the Premier, giving me time to observe. I love all the gear. These two guys with the cameras had some kit from local tech company Dejero to upload content in near real-time over bundled pipes on wireless carrier networks.

It is interesting to me that all these people working in the media know each other. Not surprising as they cover a lot of the same stories and may have even worked together. 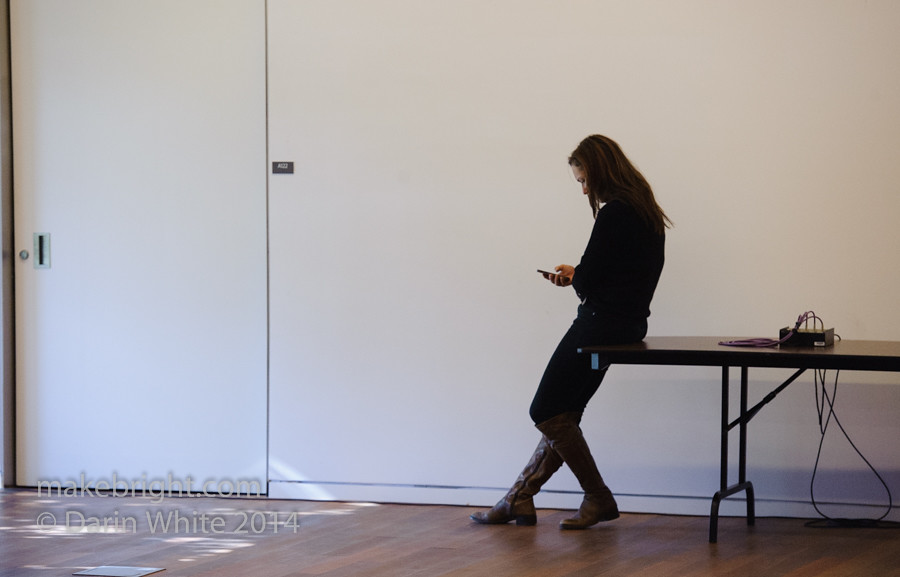 I believe this is the Premier’s official photog. She showed good crowd control during the conference meet and greet. 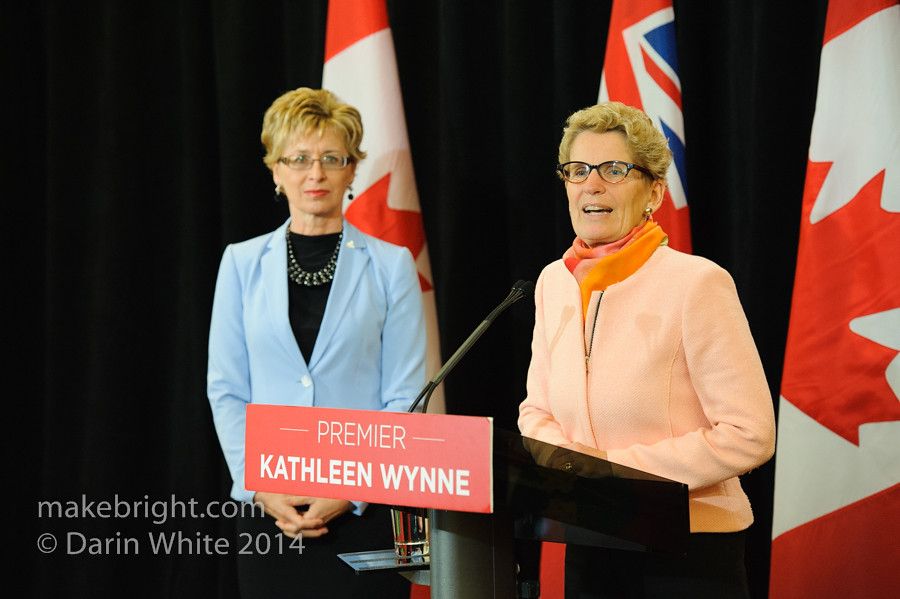 Premier Kathleen Wynne (right) with local MPP for Kitchener-Centre Daiene Vernile. In her comments to the CityAge conference, the Premier hit some good jokes related to high-speed trains between Kitchener and Toronto: “I get it, you want the train.” I caught the Premier last year up at the St. Jacobs Market after the fire and she seemed just as likeable then as now. Which is to say: likeable. 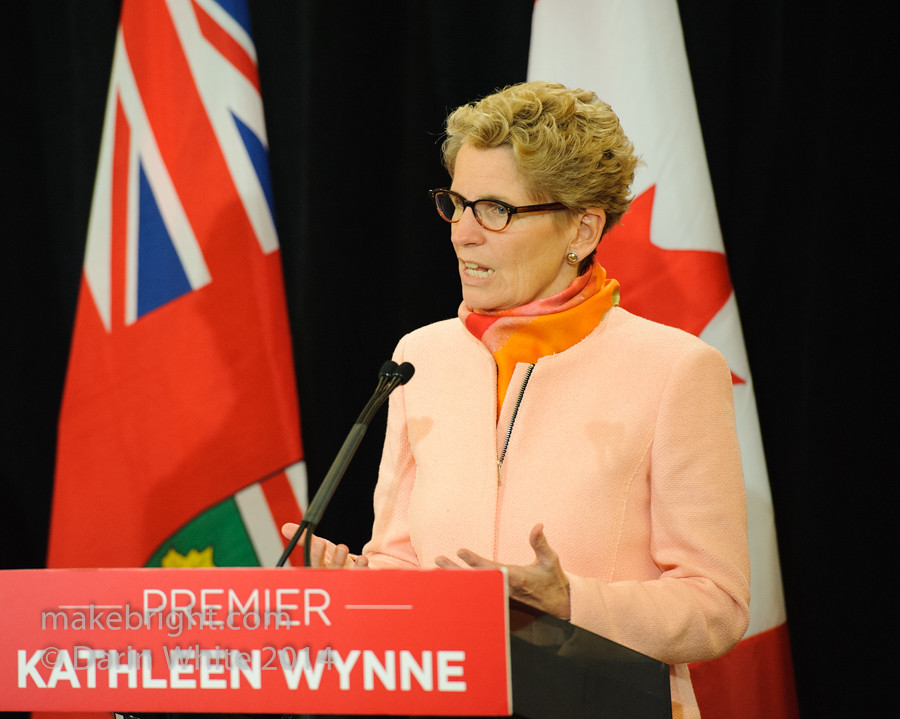 Premier Wynne got some tough and repeated questions about the interest rate on the MaRS building in downtown TO.  Also was asked if she would be glad to be working with Doug Ford if he is elected. 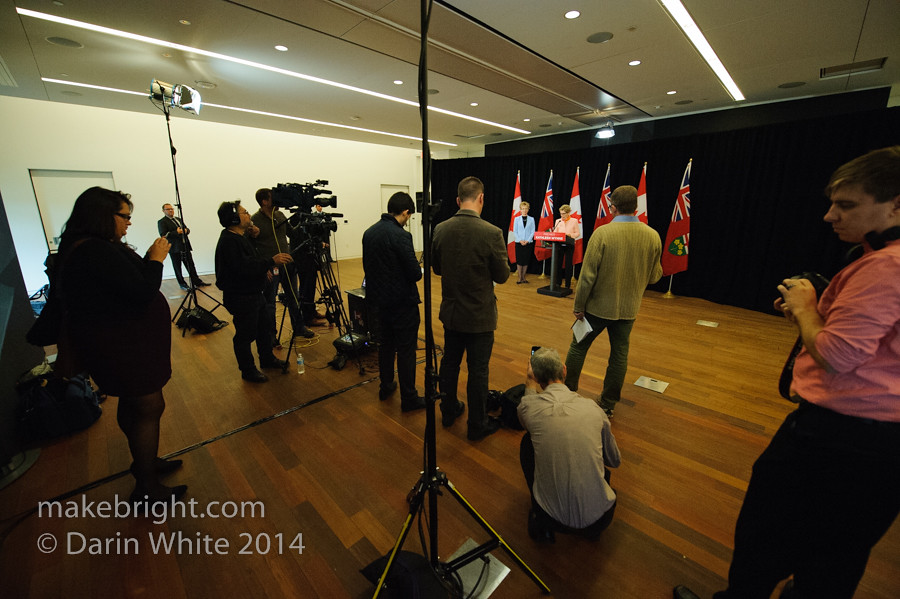 If I just wanted to photograph the Premier, it would be pretty easy with the colour-corrected lighting all set up for me. Shooting the meta-level was a bit more challenging light-wise. 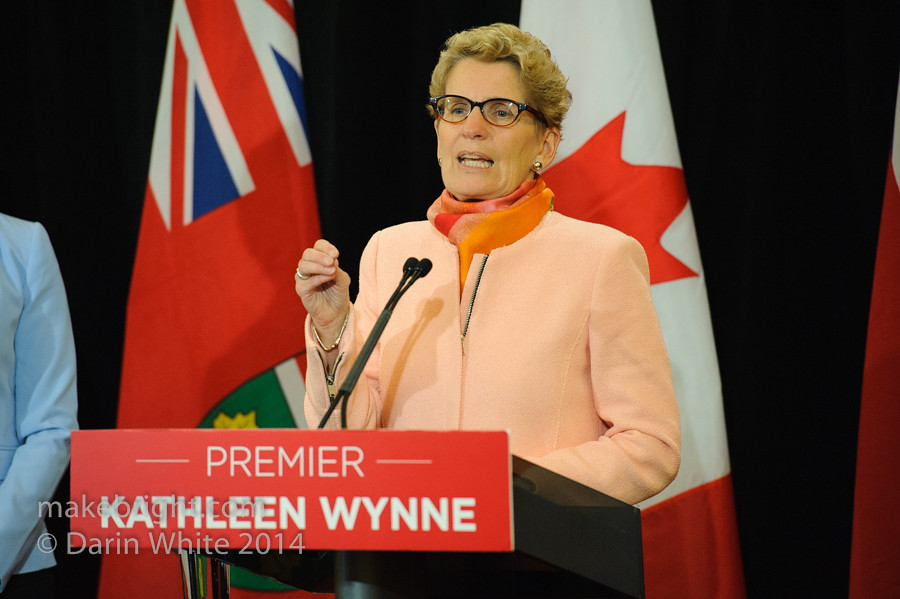 Equally as interesting as media, is to observe the media-savvy. The Premier makes very deliberate and varied gestures, which is great because people otherwise look like pylons with their arms by their sides. She also pays attention to where cameras are and knows how to help set up a two-shot. Most civilians don’t know the value of providing photogs with that still 2-count so we can get a few frames without blinks and blurs. 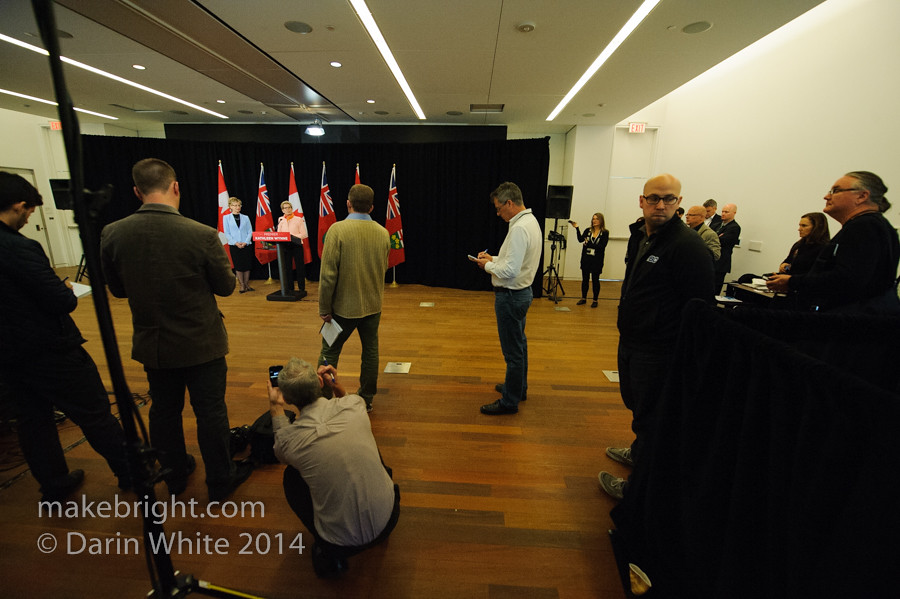 John Lorinc (blue collar) asking a question. And he has excellent questions based on what I heard in the conference.

The person with her arm up over by the exit sign appeared to be one of the Premier’s handlers. She shouted things like “last question!” and seemed to be recording audio. I’ve noticed in photographing VIPs that there is always an entourage that shows up before the headliner and sorts out audio with the sound guy and scheduling with the conference organizer. So it was with the Premier’s talk at CityAge. 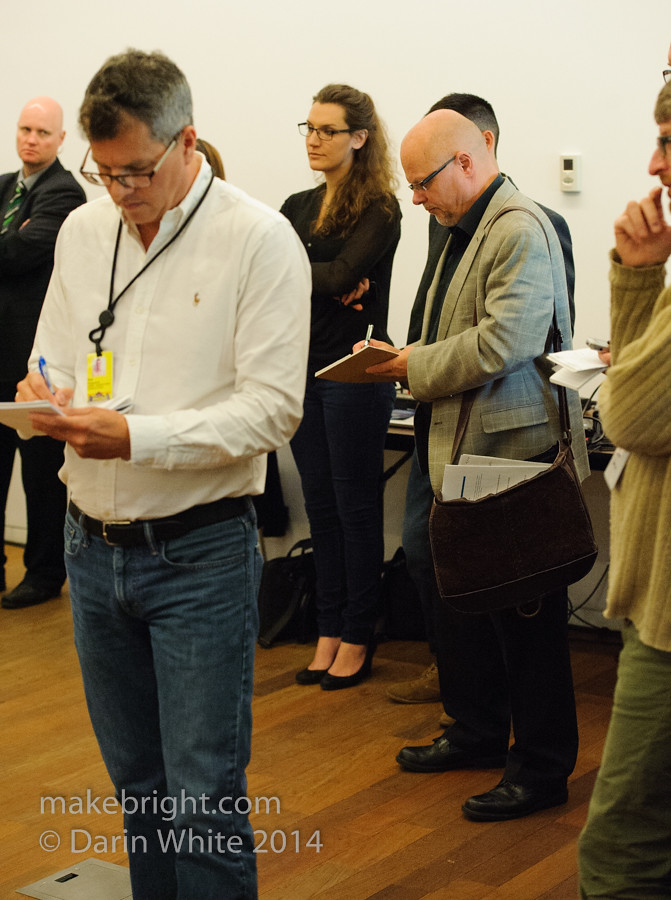 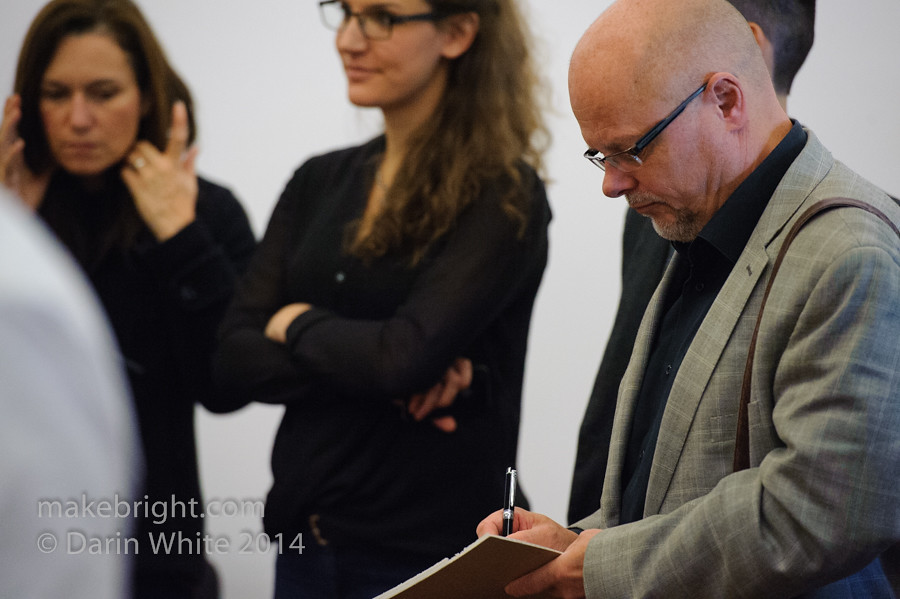 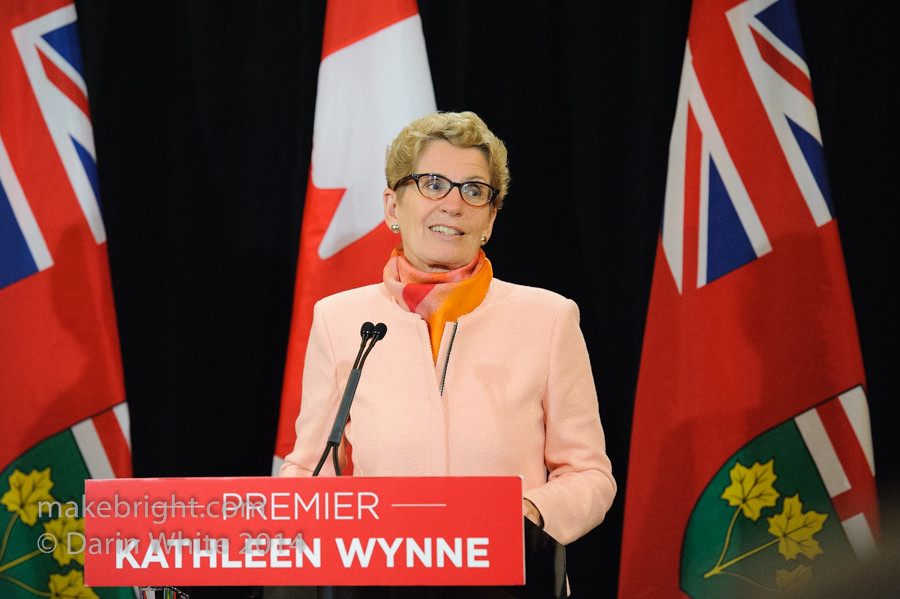 The whole session was probably over in under 15 minutes, and then… 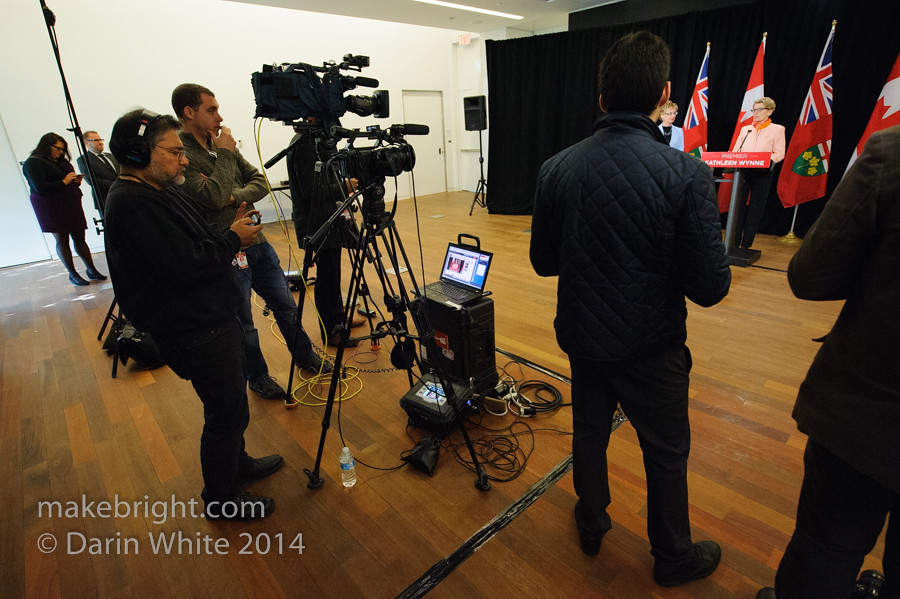 headphones guy packed this rig in the back of a Mazda within 20 minutes and was heading out. Just fascinating how the machinery works.

This entry was posted in event and tagged media, meta, politicians, waterloo. Bookmark the permalink.